BLACKPINK has shared their thoughts on their upcoming single “Ice Cream” and working with Selena Gomez!

Ahead of the highly-anticipated release of their new collaboration with the American singer, BLACKPINK sat down for an interview to talk about the song and its production.

Expressing their excitement about the new single, the members remarked, “A song that we’ve worked hard on for a long time is finally being released. It’s particularly special because we were able to work with Selena Gomez.”

However, they added, “What we’re most excited about is the fact that we can greet our fans again with an exciting and cheerful song.”

The idols also shared that they had been impressed with Selena Gomez during the collaboration process, explaining, “All of us are fans of Selena Gomez. Although we couldn’t meet in person to work on the song, we were charmed by her once again while communicating with her multiple times [during the production process]. Seeing how humble she was and how freely she expressed her opinions made us think that she was a really cool person.”

“We were thrilled because Selena Gomez told us she was also a fan of ours,” they went on, “and we’re really pleased with the result of our musical synergy.” 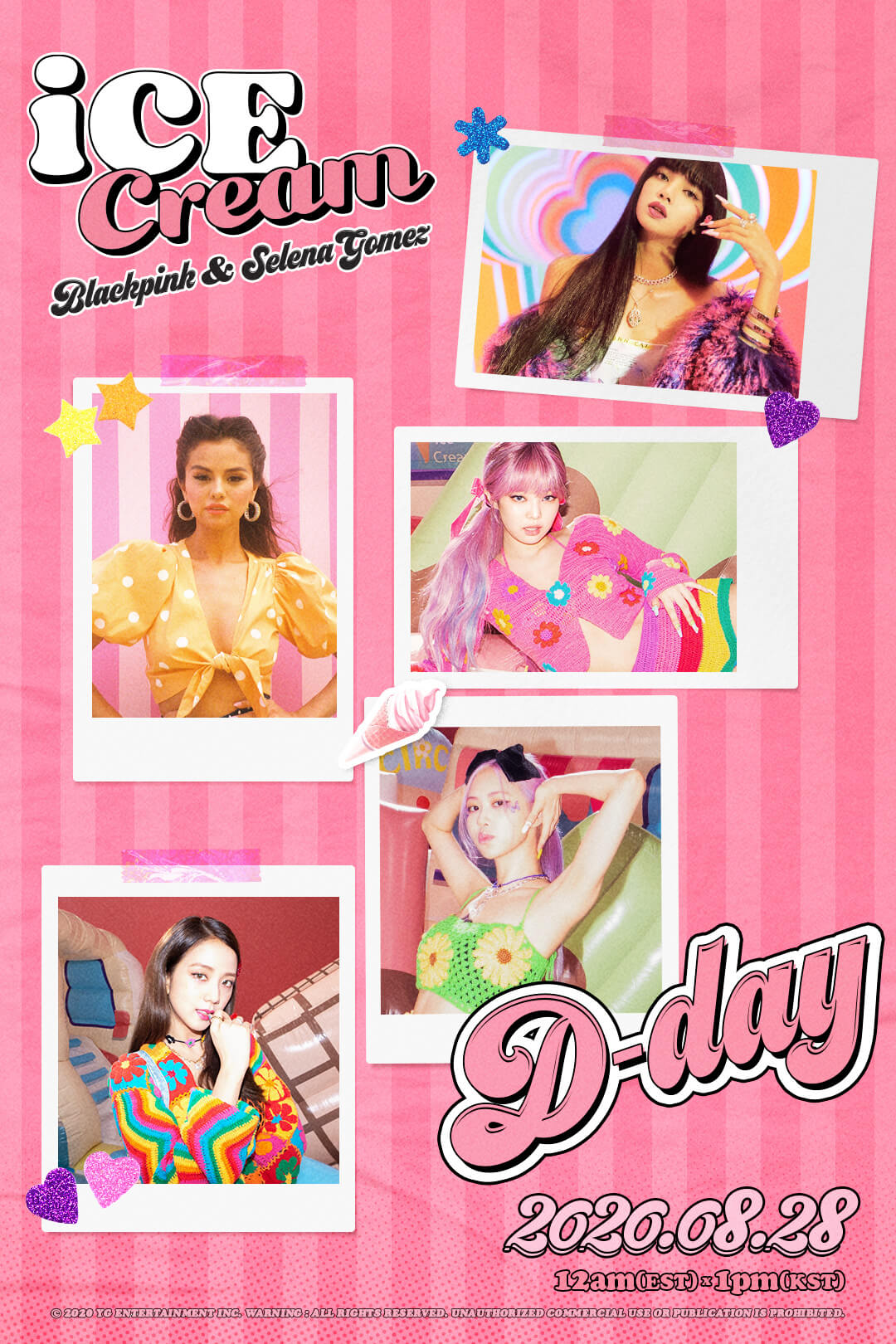 When asked about their initial reaction upon hearing “Ice Cream” for the first time, the BLACKPINK members replied, “When we first heard the song, it felt like we could taste its sweetness. We think that for the many people who are facing the sweltering heat of late summer, listening to this song will give them a chance to ‘chill’ and cool down. We hope that the good vibes and excitement we felt will be conveyed to all the people who listen to the song.”

The group also revealed that they were hoping to showcase a different side of themselves through “Ice Cream,” which contrasts sharply with their previous pre-release single “How You Like That.”

“We always enjoy the challenge of trying new things,” said the BLACKPINK members. “‘Ice Cream’ is the complete opposite of our single ‘How You Like That,’ which we released last June, and we tried to express a refreshing and lovely charm [through this new song]. We filled the song with a refreshing, unexpected charm that can melt the summer heat like ice cream, so please look forward to it.”

As for what fans should keep an eye out for as they watch the music video, BLACKPINK commented, “A set that evokes sweet ice cream and the cutesy pastel props. Overall, the bright, cheerful vibe of the styling, including the colorful outfits, went well with the song. Our opinions were also reflected [in the production of the music video].”

Finally, BLACKPINK shared that they hope to perform their new song with Selena Gomez in person one day.

“We’re grateful to our many fans all over the world,” remarked the BLACKPINK members. “We hope that in the future, when we’re able to see you in person, we’ll be able to sing ‘Ice Cream’ together with Selena Gomez on stage. We’ll be greeting you anew very soon, so until then, please stay healthy and happy as you listen to ‘Ice Cream.'”

“Ice Cream” will be released on August 28 at 1 p.m. KST. In the meantime, check out the teasers for the song here!