Jung Kyung Ho participated in a pictorial and interview for the 20th-anniversary edition of Cosmopolitan Korea magazine!

Jung Kyung Ho, who made a strong impression on viewers with his role as cardiothoracic surgeon Kim Joon Wan in “Hospital Playlist,” began the interview by talking about his upcoming film “Apgujeong Report” (literal title). He explained, “It’s a story about a plastic surgeon. I’m playing a doctor who is full of ambition.” He added with a laugh, “He’ll be a full 180-degrees different from Joon Wan.”

The actor also recently opened a YouTube channel. When asked if he plans on revealing his everyday life through the platform, he commented, “I’m in the midst of preparations, but it’s not as easy as I’d thought. Showing a more natural side of myself is difficult for me. I’m thinking about what kind of content to share, but nothing has been solidified yet.”

Jung Kyung Ho then talked about his role in “Hospital Playlist,” which concluded its first season in May and has a second season in the works. He expressed his gratitude that the drama would continue for another season, saying, “I think the fact that it’s not over yet is a really new and different experience [for me]. I was really happy before, during, and even after filming.”

The interviewer also brought up his friendship with the other cast members, commenting on pictures that they had recently taken together. Jung Kyung Ho explained how they had grown so close to one another, saying, “We play music together, and the energy we get from that is really good. Of course we act together as well, but the joy we get when we make music together is really something else. That’s why I think the five of us were able to grow even closer to each other.”

Moving on to his acting skills, Jung Kyung Ho modestly said that the reason he speaks most passionately about acting is because it’s the only thing he knows how to do. In response to the question of what makes a good actor, he said, “In order to be a good actor, you have to begin by being a good person. You have to know how to think good thoughts and speak good words, so that it will be reflected in your acting. You also have to know how to express yourself well in order to portray your characters in a more precise, detailed way.” 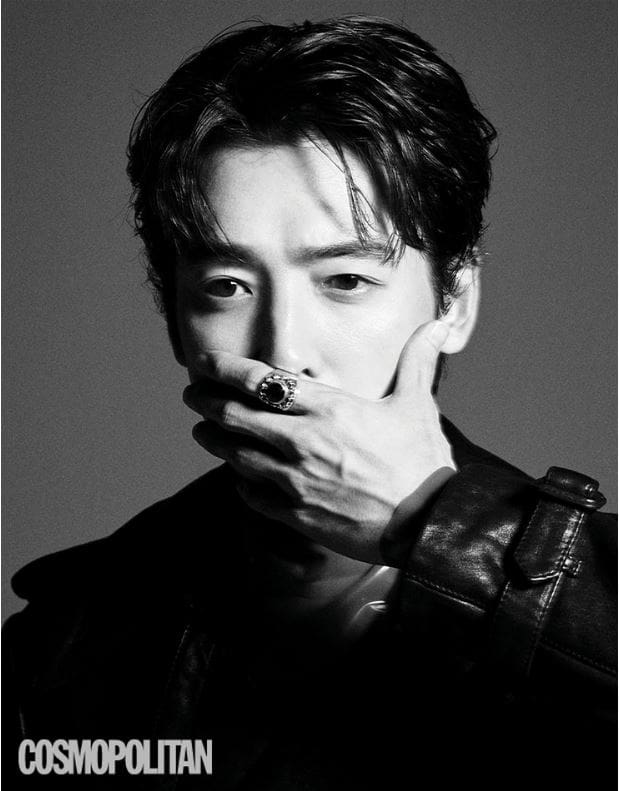 Jung Kyung Ho also described how his attitude towards acting has changed. He mentioned that in his twenties, he expressed himself without hesitation while acting, but now he understands that if he makes a mistake [and disregards the director’s wishes], he might not be able to act anymore. “I have more of a sense of duty now, and I’m even more sincere about my work,” he explained. “I’m working hard so that I won’t regret anything about my acting. I’m also trying to appear different in each role that I take. If I don’t change, then there may come a time when I can’t [act] anymore.”

Since this issue marks the 20th anniversary of Cosmopolitan Korea, Jung Kyung Ho responded to a question about what he would like to do if he returned to his twenties. Although he said that he’s happy with his current age, he mentioned that he would like to redo all of the roles he took on in his twenties. “However, if I have to do roles different from the ones I originally did, I wouldn’t want to go back,” he added. “I’m really thankful for and satisfied with all of the productions I’ve taken part in up until now.”

Jung Kyung Ho then shared some words of advice for those in their twenties and thirties. “This might be obvious and trite, but I really think we should start paying more attention to the environment,” he said. “The damage from floods is already so great, and you know that this can all be traced back to pollution. When I was young, I ignored it too, and I’m really regretting that now. For the sake of future generations, we need to have awareness and live responsibly.”

The actor also spoke about his own age and his excitement to grow older. He commented, “While working as an actor, I realized I couldn’t wait to turn 40. When I’m older, I can pull off a wider variety of roles, and I think my experience will really show through in my acting with depth. I’m excited to turn 40.”

As the interview wrapped up, Jung Kyung Ho was asked to provide spoilers for the second season of “Hospital Playlist.” He said with a laugh, “I want to share spoilers, but I don’t know anything. The director said he doesn’t know anything either.”

Watch Jung Kyung Ho in “When the Devil Calls Your Name” with English subtitles below!