First Impressions: 3 Reasons “Alice” Should Be On Your To-Watch List

SBS’s new Friday-Saturday offering is… different, to say the least. But that’s in the best way possible. This is one of those rare sci-fi dramas in K-dramaland, but it’s so well-produced and has such great (read: natural) effects, it’s as if you’re watching a big-budget movie. That plus the amazing acting, the thrilling action, and the storyline that promises to not be so cut-and-dried, and you’re guaranteed to be hooked.

“Alice,” starring Kim Hee Sun and Joo Won, is a time-traveling story that remains grounded in human relationships. In the year 2050, people figure out how to time travel and thus take advantage of it to go back in time for various personal reasons. To avoid giving too much away before the spoiler break, just know that this is one atypical K-drama, and you should be watching it if you love great acting and a rich storyline (and really, who doesn’t?).

Here are some reasons this “Alice” premiere should be on your to-watch list:

The complex and gripping storyline

The story starts off with Yoon Tae Yi (Kim Hee Sun) and Yoo Min Hyuk (Kwak Si Yang) traveling from 2050 back to 1992 to get their hands on “The Book of Prophecy,” a book that supposedly predicts a sad ending to time travel. However, while in 1992, Tae Yi discovers she’s 12-weeks pregnant. Min Hyuk, who happens to be the father, asks her to abort the baby as she (and the fetus) was exposed to radiation while traveling through the wormhole and would be further exposed when traveling back to 2050. Tae Yi, unable to take her own child’s life, takes off by herself, goes into hiding, and stays permanently in 1992.

Unfortunately, the radiation has already affected the baby’s brain development, causing the child to be lacking in certain social skills such as empathy. But while the child, Jin Gyeom, did display disturbing behavior when he was younger (he harmed animals and insects, without fully understanding the implications of his actions), grown-up Jin Gyeom (Joo Won) seems to have a better grasp of what behavior is acceptable and what isn’t, as he experiences normal grief and pain when his mother is murdered one night.

His mother’s death may have been the deciding factor in Jin Gyeom deciding to become a cop. The next time we see him, he’s already a lieutenant and has even managed to build stable relationships with co-workers and friends. One day, a strange case comes into the squad’s radar: A case of a missing child who suddenly returns home, unharmed, three days later. According to the child, she had been spending time with her mother the whole time, except the mother was supposedly in Europe on a business trip. And that’s when Jin Gyeom’s world suddenly gets a lot more complicated.

Jin Gyeom is clued in to time traveling when things about his cases don’t make sense — the appearance of high-tech drones, tiny bullets that have never been seen before, and an adult suspect whose ID shows that they’re supposed to only be five years old. He also finds a futuristic-looking card on the adult suspect, a card that he had once seen in his deceased mother’s belongings.

Oh, and that futuristic card can also do this:

With the groundwork laid down for so many rich storylines, “Alice” is guaranteed to not be your run-of-the-mill action, thriller, and suspect-hunting. There’s so much depth to be mined here, such as the ethics in time travel. People from the future can pay an organization to travel back to the past to “heal” from certain wounds. But naturally, people take advantage of this, and we see someone traveling back in time to murder his abusive brother. It’s a grey area that will need a lot of policing, and I hope the drama tackles it head on.

Another storyline that is ripe with drama is the relationship between father and son. Min Hyuk doesn’t know Jin Gyeom is his son, the very son he spent a chunk of these episodes trying to gun down. And seeing how Jin Gyeom now poses a bigger threat to their organization, Min Hyuk is even more determined to “take care of him.” There’s so much intrinsic tension in this relationship, we know it’s just going to be explosive. 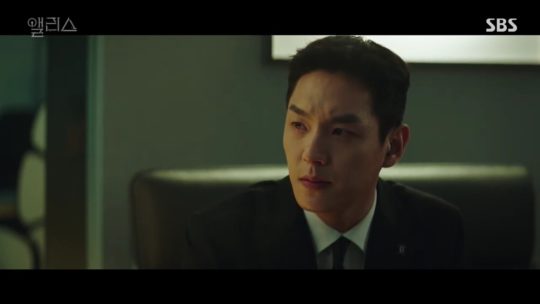 Oh, and there’s the matter of the mother look-a-like. Using her last breath, Tae Yi warns Jin Gyeom that if he ever sees someone who looks like her, he should avoid her at all cost. However, when Jin Gyeom comes across an exact look-a-like years later, he forsakes the warning and goes up to give her a big hug. Who is this woman? Why does she and Tae Yi look identical? Why do they even share the same names? And are we also getting some romantic vibes off this “reunion”? Drama ain’t gonna go weird on us right?

Find someone who looks at you the way Joo Won looks at Kim Hee Sun. Unless you’re the mother. Then no.

Also, one bonus point for the drama for not spending time discussing the mechanics of time travel (yet). And I’m really glad they’ve avoided doing this because that will just open a can of worms filled with possible plot holes. For example, by changing the past, are they creating new timelines? Is there a main timeline with different branches or are they parallel timelines? And by changing the past, is there a possibility of changing their own history? Like I said, a can of worms that are honestly best kept in the can.

The production on this drama is really good. I’m not just talking about how everything looks (and they truly look good), but specifically how smooth all the CGI is.

And what about the futuristic technology? Hopefully we’ve only seen the tip of the iceberg, but just that face-morphing device alone is enough for us to look forward to 2050. An item that de-ages us in the blink of an eye? Take all of my money!

It’s not just these post-production embellishments that make for a great ride either. The action scenes themselves are pretty cool too, and the actors do a great job pulling them off.

Kim Hee Sun is fighting in stilettos here. Not quite practical, but very badass.

As cool as the production is, the drama would be pretty lightweight without good actors driving the storyline. And the actors are good. This is Joo Won’s first drama since his military discharge, and there is no rustiness here. He makes Jin Gyeom seem both unfeeling yet human at the same time—always showing just enough aloofness to indicate his emotional shortcoming, but never veering towards creepy or psychopathic.

And the man looks like this, which you know, doesn’t hurt:

Kim Hee Sun is purely sublime. She goes through a lot in the first episode alone, taking on a kick-ass action scene, tackling the highs and lows of motherhood, and finally dying in an emotional scene. There’s so much subtlety in her acting, you can’t help but be drawn in and experience all the emotions along with her character. The scene where she’s sitting across a detained Jin Gyeom stands out in particular. Her character, Tae Yi, believes that her son didn’t murder his classmate, and yet there’s that little sliver of desperation because she knows what her son is capable of. And when Jin Gyeom denies it, her expression ever so slightly brightens up. It’s just such detailed acting, and really, Joo Won and Kim Hee Sun are doing such a great job, they alone are reasons enough to check out “Alice.”

Are you watching “Alice”? Are you as impressed with the premiere episodes as I am? Which part/scene did you enjoy the most? Let us know in the comments below.

Belinda_C can’t wait for the next episode! Talk dramas, SEVENTEEN and Shinhwa with her on Twitter!