BTS Talks About Their No. 1 On Billboard’s Hot 100, Future Goals, And More

On September 2, BTS held an Online Global Media Day during which they talked about landing No. 1 on Billboard’s Hot 100 with their new English-language track “Dynamite.” This is the highest ranking on the chart achieved by an all-Korean group. BTS also rose to the top spots on many other Billboard charts dated for the week of September 5. 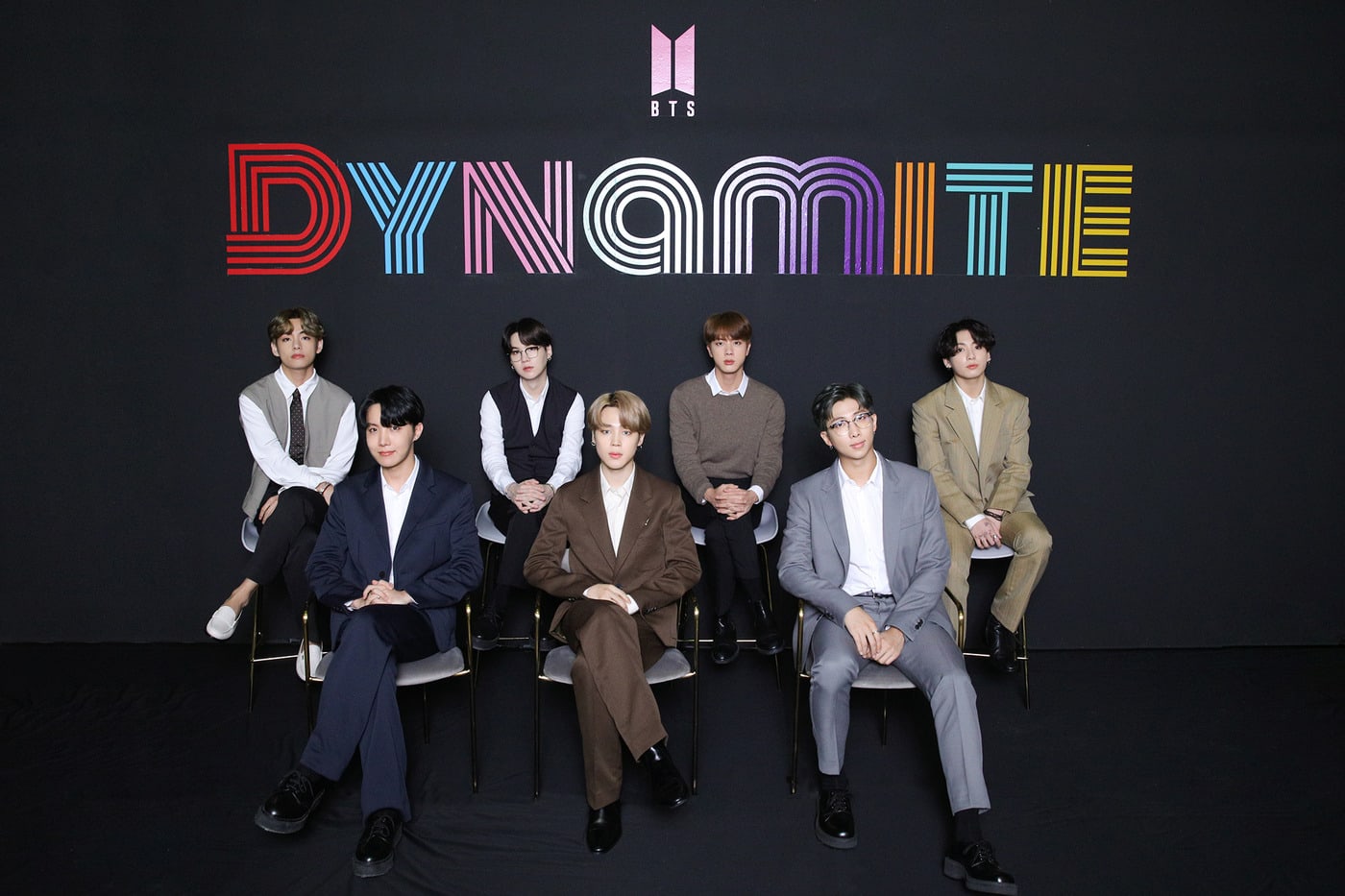 RM revealed, “I was waiting [for the chart results] early at dawn. As soon as I heard the results, I thought I should confirm the news, relay it, and go to sleep soon since we had practice and activities scheduled for the next day, so I quickly went to sleep. To avoid being overly happy about this touching moment, I reminisced about the past a lot. I thought of the times when we were scolded together in the practice rooms and talked in the recording studio in order to take it in as calmly as possible. I simply think what I contributed to this is very little. I think it’s thanks to the fans who watch over us, the staff who created us, and the members by my side.”

Jimin shared, “It’s something I never even imagined. Honestly, I did think it would be nice if it happened at least once. Now that it actually happened, it still doesn’t feel real, even now. I was really, really happy, and I wasn’t sure what to think. I was also grateful to the members, who combined their strengths together to work hard every day by my side.” Jimin continued, “I heard the news at 4 a.m. and cried until I fell asleep at 7 a.m. I was with Jungkook when I saw the chart and screamed with joy and touched the screen. I kept touching it while crying. I thought, ‘We can achieve it too if we try.’ It feels like we’ve been acknowledged and praised.”

V commented, “I didn’t know we would receive attention from all around the world. Coming up to Seoul and the times spent practicing have become good memories of the past. The difficult times from the training period until now have all become good memories, so I’m really happy. I feel as if I’ve received the best award certificate. At least for today, I hope everyone can smile and cheer, forgetting their worries and concerns.”

Suga also expressed his disbelief. He said, “I still can’t believe it. Although I wanted to try placing No. 1 on the Hot 100, I didn’t work towards this goal. Now that it has actually happened, I feel bewildered and overwhelmed. After checking early in the morning, I really pinched myself to confirm if it wasn’t a dream.”

Jin revealed, “I was so happy, and I contemplated how I should express these feelings to our fans. I kept writing and erasing my post on Weverse, and I expressed that it was something BTS and ARMY achieved together. I’m happy to receive such good results even though it was a song we made because we simply wanted to enjoy it with fans. It’s thanks to our fans.”

J-Hope also talked his past memory from seven years ago at the time of BTS’s debut. He shared, “I did it with a do-or-die attitude, and I worked as hard as my stamina would allow. Like I said at the showcase, my goal was to work harder than anyone else to spread the name of BTS even just one more time in order to survive. It’s really an honor to have received such a great amount of love that is so much more than what I imagined, and I’m happy because I think I’ve achieved my goal from seven years ago. I’m also happy and proud because I think the world has really acknowledged BTS’s sincerity.” J-Hope added that he wanted to tell his past self from seven years ago that his efforts didn’t betray him.

BTS also looked back on the time they first charted on the Billboard 200 with “The Most Beautiful Moment in Life, Pt. 2.” Jungkook shared, “I thought it was impossible. I wondered if it was real. I think that was the moment that allowed us to have even greater goals.”

Talking about the members, J-Hope shared, “The members are so precious to me. They’re so precious to the point that it’s never enough no matter how many times I say it, and now I can’t be without them because they’ve become a big reason for my life. I’m so grateful that they have been with me for seven years, and I want to say that I hope we can continue to stay together forever in the future. I want to take this time to tell them that I love them.”

Jin continued to express his gratitude for the fans, explaining that ARMY was the reason their achievement on Billboard’s Hot 100 was possible. He shared, “To us, ARMY are the people we want to share good news with first, hide sad news from, and only show and share our good sides to.” Jin revealed that he was happy that ARMY enjoyed “Dynamite,” and he added, “We exist because ARMY exist. We will continue to work hard in the future so ARMY can be happy. I love you all, ARMY.” 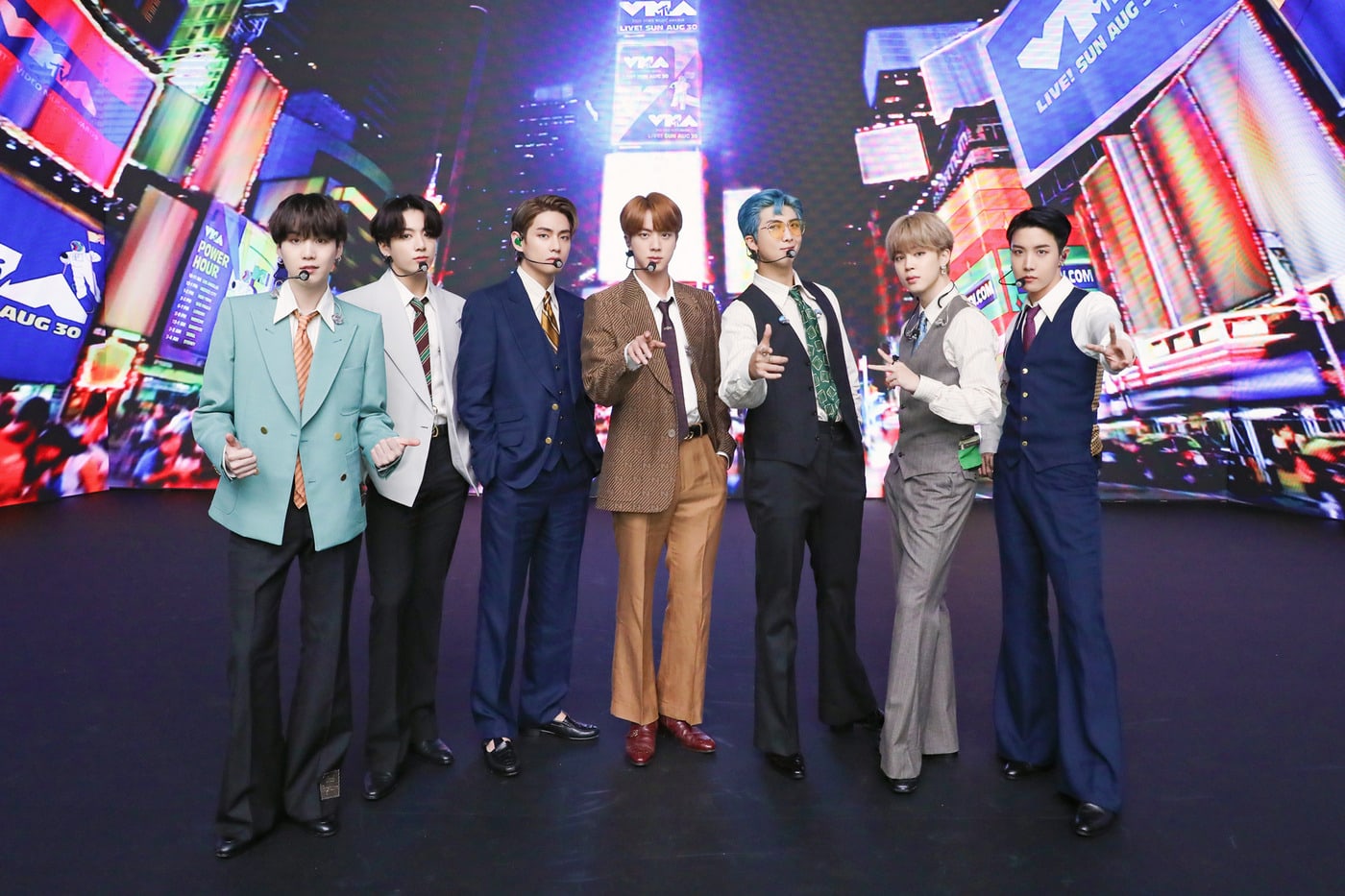 Suga, who previously shared his goal of topping the Hot 100 chart, also talked about his new goal. He shared, “I feel proud that we achieved the goals I shared one by one, but I also wonder if it’s okay for me share another one. I’m happy that we achieved the goal for ‘Dynamite,’ but I’m also wondering what goal we should set next. So I thought that I’d like for BTS to have our own performance at the Grammy Awards.”

RM also added that his goal is to be nominated and to receive an award at the Grammy Awards. He also revealed that another dream of his is to hold a concert out in the open like a festival. Finally, Jimin added, “I like our music. We’re preparing for our new album right now, and even when I listen to it, I feel that our music is very good. Please anticipate it a lot!”