In 2018, the Korea Music Content Industry Association implemented a new certification system for album sales, song downloads, and online streaming. Starting with music released on or after January 1, 2018, Gaon Chart now certifies albums platinum once they reach 250,000 sales, while songs receive a platinum certification at 100 million streams or 2.5 million downloads.

On September 10, Gaon Chart announced that EXO-SC’s first full-length album “1 Billion Views” had received an official double platinum certification after selling over 500,000 copies since its release in July. Although the duo previously went platinum with their first mini album “What a Life” back in 2019, “1 Billion Views” marks their first unit release to be certified double platinum.

Meanwhile, BLACKPINK’s special edition of “How You Like That,” ATEEZ’s latest mini album “ZERO : FEVER Part.1,” and TXT’s 2019 album “The Dream Chapter: MAGIC” were all officially certified platinum after selling over 250,000 copies each. Notably, “ZERO : FEVER Part.1” is ATEEZ’s first release ever to go platinum. 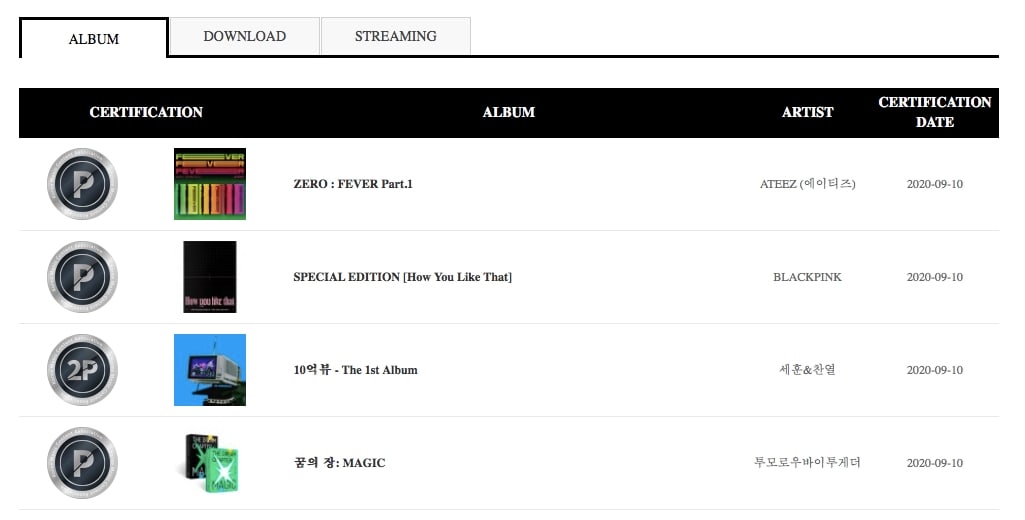 In the download category, BTOB’s “Only One for Me” and Im Chang Jung’s “There Has Never Been A Day I Haven’t Loved You“—both of which were released in 2018—received official platinum certifications after surpassing 2.5 million downloads each.

Finally, Jeon Sang Keun’s “I Still Love You a Lot” was certified platinum in the streaming category after surpassing 100 million streams.

Congratulations to all of the artists on their impressive achievements!