Into The “I-LAND”: A Review Of Episode 11 Highlights

I know what you’re thinking. Huh? A single-week review instead of the usual bi-weekly ones? Well, we’re just too pumped about the looming finale (and my reviews are slowly getting longer and longer) so… here we are? Before we welcome the birth of a new boy group, here’s a rundown of what happened in week 11 of “I-LAND,” including the usual suspects of performances and eliminations.

Warning: You know the drill. Major spoilers ahead!

The curse of the number “5”

Sunoo, having placed first in the second test, is given the benefit of choosing someone from team “Flame On” to fill in Ta-ki‘s spot in team “Chamber 5.” So he chooses Sunghoon, who also happens to be the leader of team “Flame On.” Ruh roh.

Sunghoon then comes to the conclusion that he’s haunted by the number “5.” He’s in team “Chamber 5,” has part “5” of the song, has “5” days left to practice, and is in “5th” rank. Oh, and he was in charge of part “5” in “Flame On” too. That’s five 5s, and the horror of the curse (or the pressure of switching parts in such a short time period, you decide) gets to Sunghoon, and he starts acting strangely, starting with screaming when seeing pork slices in the pantry, then randomly breaking into fits of laughter. The other boys find his mini-breakdown both alarming and hilarious, offering him support and reminders to “take his medication.”

Son Sung Deuk arrives to monitor their mid-point evaluations and finds the “Chamber 5” team to be lacking. He notes that it feels more awkward than “refreshing” in places, and the members don’t seem to be having fun. This is a totally valid statement which I too observed. Maybe it’s the song itself or maybe it’s the situation, but when the boys were dancing to “Adore U” in the previous episode, you could easily see the boys exuding fun and high energy, which isn’t the case here.

On the other hand, Son Sung Deuk is genuinely impressed by the performance of team “Flame On.” K, after seeing how Sunghoon led the team, alters his leading style and creates an atmosphere where the members can give ideas and suggestions. The harmonious atmosphere plus the team members’ drive contributes to them really digging in, and their efforts really pay off here. However, Son Sung Deuk does make a note of Hanbin‘s relatively low energy output and calls him out for some of his sloppy moves.

We suddenly see the boys dancing around and having a blast. Apparently, they’re having a party. A cleaning party to be exact. They sit down, distribute the (cleaning) parts, agree they can switch parts at any given time (LOL!), then get on with washing, vacuuming, airing bedding, and all-around cleaning in general.

After the cleaning session, they enjoy a round of pizza while playing the “Image Game,” a game where they choose members according to their images. For the trainee who changed the most since the first meeting, most of the boys choose K. For the most fun member, Heeseung is the majority’s choice. (This then summons Jealous Jay, who is adamant in wanting to be more fun than Heeseung). And for the trainee they would introduce their sister to, Sunghoon pulls his oppa (older brother) card and fervently insists none of them are worthy. 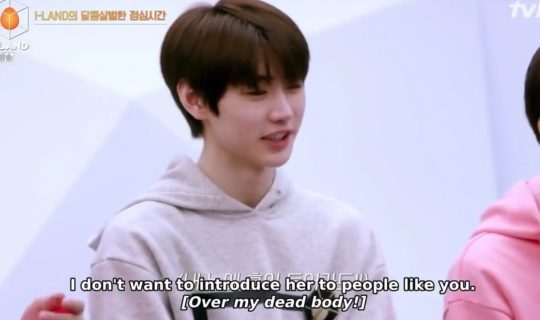 Then, the top three rankers (Sunoo, Heeseung, Jay) are summoned to their room where they are told their benefits for placing in the top three is to be able to make phone calls. Sunoo, who is allowed three phone calls, uses one to call ex-I-Lander Jaebeom, and the trainees are all excited to hear a familiar voice again. The rest of the phone calls are made to their family members, and it’s adorable to hear how both sweet and savagely straightforward they are with each other, as families usually are. Sunoo’s sister wants to hear all about his time at I-LAND, especially in regards to Jay and Sunghoon. Heeseung’s brother teases that Jay’s cuter than Heeseung, but cheers when Heeseung says he’s ranked higher. As for Jay’s mother — who proves the power of genes — asks Jay if he’s been eliminated the moment she answers the call. Then, she continues on about how he shouldn’t be too disappointed and tells him to not do anything silly out out of being traumatized, all before Jay has a chance to explain his call.

Moving on to the actual test, team “Chamber 5” performs first, and everything goes well, with not one pillow being harmed in the process. The panel notes Sunoo’s natural fit for the song and how Sunghoon does well with the nuances and expressions despite his shorter practice time. Heeseung, however, needs to work on making his expressions more natural, whereas Jungwon — though he isn’t bad per se — doesn’t perform to his usual standards and seems to lack energy and confidence.

Team “Flame On,” on the other hand, completely wows the panel, and we hear them exclaiming throughout the performance. Doobu even gives them a standing ovation at the end. Bang Si Hyuk showers them with praise, commenting that K and Ni-ki greatly impressed him and that he thoroughly enjoyed their stage. He also notes that Hanbin also stands out, but sadly, in a negative way. He reverts back to some of his bad habits, which frustrates the panel.

And then there were nine

This third test is ranked solely on the panel’s scores alone. In first place with a wide margin is K, with 92 points. The panel feels that he is the obvious choice, having done great himself as well as led his members well. In second place is Ni-ki, with 87 points. This is the first time Ni-ki placed within the debut line, and this drastic rise in ranking is a testament to how he bloomed these past two tests.

Then comes Sunoo with 86 points, Heeseung with 83 points, and Sunghoon, continuing with the “No. 5 curse,” staying at fifth rank with 81 points. Jay comes in at sixth rank with 79, then Jake with 78, and Daniel with 77. The boy is shocked to finally not be at the brink of elimination, but the panel thought that he did well and looked cool in his performance.

Finally, we’re down to the final two left standing on the stage: Hanbin and Jungwon. It’s sad to see Jungwon standing there, as he’s always done well and received positive feedback in the previous tests. He may have been on a downward trend these past two weeks, but it would have been particularly painful if he were to be sent home for performing below expectation in just one test. However, from how the panelists phrased their comments, it could be deduced that the one being sent home would be Hanbin. And I was right.

Hanbin has had a pretty unusual trajectory on “I-LAND.” He had a moderate amount of screen time during the first half but never made it out of Ground. Then when push came to shove, his fans secured him a place in the final 12, after which he spent a few weeks in the lower ranks before shooting up to fourth place last week. Sadly, his ranking takes a heavy hit this week, and he is sent home. Despite so, he still has the brightest smile on his face while hugging everyone goodbye, and this is probably what I like most about Hanbin. Among all the big and quirky personalities on “I-LAND,” Hanbin is one of the mellower ones (at least from what we see on screen) and would have provided a good balance in the final debut team. Sadly, his journey on “I-LAND” ends here, but he promises his journey to debut will continue. So all the best to you, Hanbin!

Watch the latest episode of “I-LAND” on Viki below:

How are you feeling with Hanbin being eliminated? And with the finale right upon us, tell us who you predict will the the Top 7, as well as who you want to be in the Top 7 in the comments section below!

Belinda_C can’t choose her Top 7. It’s too difficult! Talk SEVENTEEN and Shinhwa with her on Twitter!