Watch: “I-LAND” Contestants Perform In Finale + BTS And TXT Cheer Them On With Encouraging Messages

“I-LAND” came to an end with a dramatic finale!

The September 18 live finale of the Mnet show decided which of the Top 9 would take spots in the show’s new boy group. The episode started off with the remaining nine contestants sharing their hopes to debut and their determination to pull off a great final performance so they could grab a spot in the group.

Big Hit Entertainment founder Bang Si Hyuk expressed his gratitude to the producers, rookie development team, staff, and the trainees, and he shared his encouragement for the contestants.

The members of Big Hit’s boy groups BTS and TXT were present for the finale, and TXT’s leader Soobin told the contestants, “I’m nervous too. I hope that you won’t be nervous and you’ll show everything you’ve got and get a good result.” 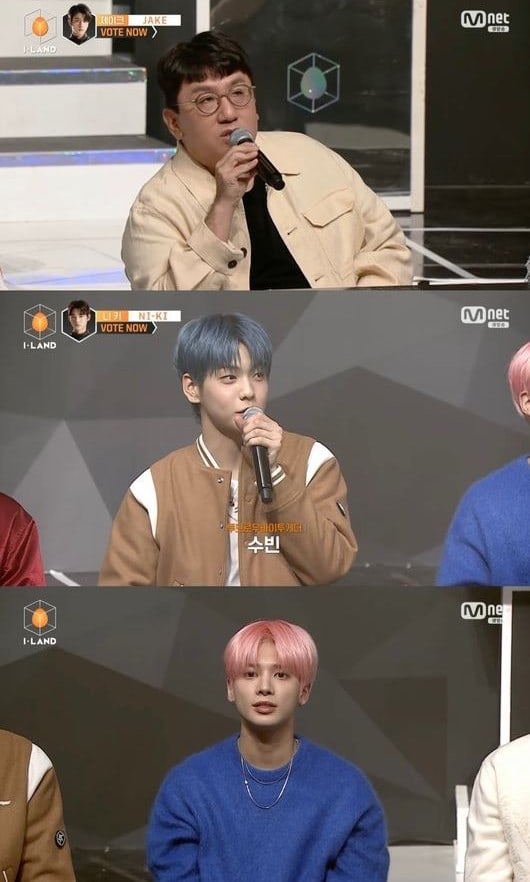 The new group’s name was announced as ENHYPEN, which was described as meaning, “Just like hyphens connect different words to make new meanings, members of ENHYPEN will connect, discover each other, and grow together.”

BTS leader RM shared that he had a painful memory about their own group’s name (which literally means “Bulletproof Boy Scouts” in Korean), saying that they hadn’t told anyone except their parents and friends about their name for three years. He said, “I think ENHYPEN is much cooler and prettier than ours. We’re going to cheer on ENHYPEN’s beginning.” 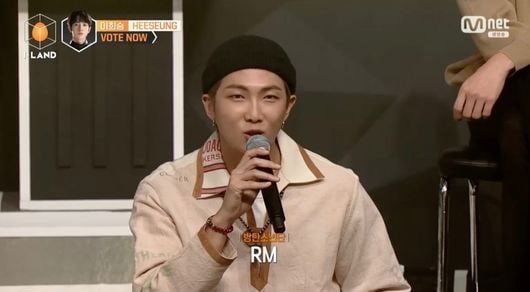 The “I-LAND” final test was for the nine remaining contestants (Sunoo, Ni-ki, Daniel, Sunghoon, Jungwon, Heeseung, Jay, Jake, and K) to perform the original song “Calling (Run to You).”

After they performed, Bang Si Hyuk said, “That was a great performance. I hope that even if you develop more in the future and become a big group, you won’t forget the excitement and emotions you’ve felt in these moments.”

BTS’s J-Hope told the contestants, “I really enjoyed your performance. It was amazing to see it in person.” He encouraged them by saying they’ll shine even brighter in the future if they continue to maintain their love for music and their passion and hard work when it comes to performing. 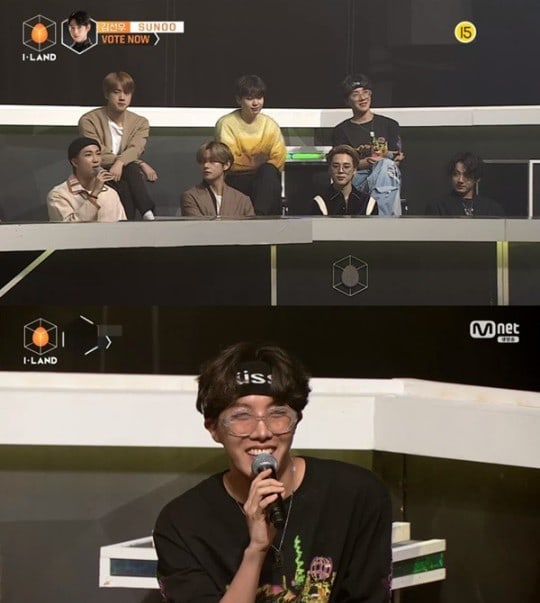 Jimin shared, “If you don’t forget the people who support you, you love your fellow members and love the work you’re doing, then you’ll achieve success.” Jungkook said, “I think we’ve got here on the basis of ‘passion.’ If you also don’t forget how you’re feeling now and keep this up, then you will discover and grow, just like the meaning of your name.” 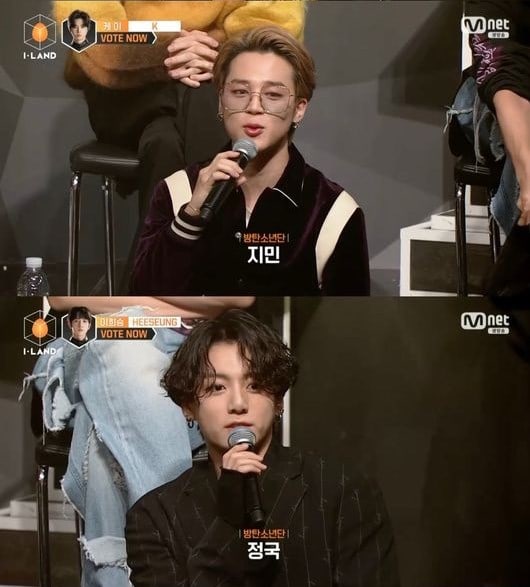 The show’s MC Namgoong Min asked the group to share how they’d felt when their own debut had first been decided on. Jin said, “When we first debuted, I looked at them and thought I wanted to be with them for a long time, and I think it’s such a relief that I’ve been able to do that.” He said to the trainees, “You’ll also be together for a long time, so I hope you can be happy and have a good relationship. You were very cool.” 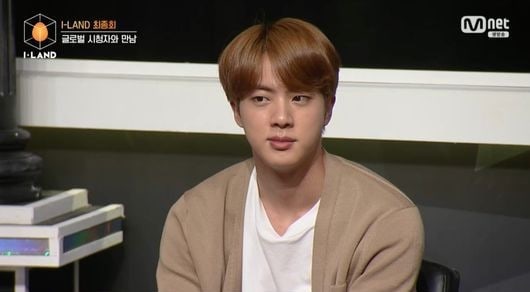 Suga shared, “We also made our television debut on this stage. It’s brought back a lot of old memories. You did very well, so I hope I see you more often in the future.”

When asked by Namgoong Min about memories from when BTS visited “I-LAND,” V talked about how there was a lot of food in the I-LAND facilities, comparing it to their own trainee time and the period right after their debut. “I even got scolded for having chicken breast with salt,” said V. “I was very happy to see you all being like a family in such a good place.” 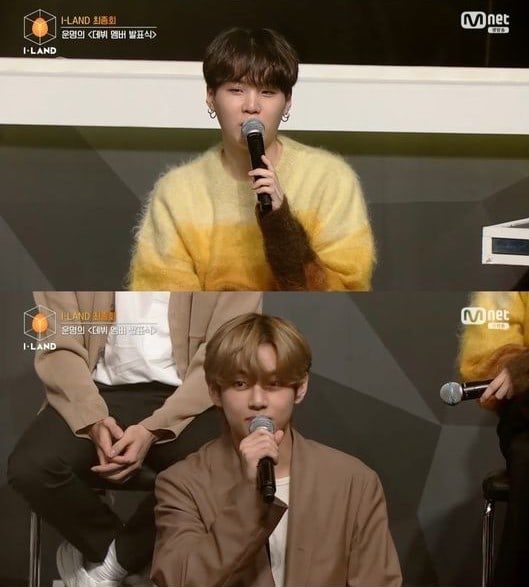 J-Hope shared that he’d been a regular viewer of “I-LAND” and said, “I really enjoyed watching the BTS mission. I wanted to tell you that I’m grateful and that you worked hard.” Jungkook said, “I think you’ve done so well so far. I hope that you’ll work hard as you rise as far as you can reach. I hope you quickly find your own color and show a great version of yourselves to more people. Good luck!”

V said, “I wanted to thank you for showing us a cool performance. It was really great. If we have the chance in the future, I hope we can perform together on the same stage.” RM said, “I think the beginning and end are always connected. I hope we meet later on on the same stage or in Big Hit’s offices.” Jungkook told them, “Don’t give up. You can do it.”

It was then announced that the new group ENHYPEN will be composed of members Jungwon, Jay, Jake, Ni-ki, Heeseung, Sunghoon, and Sunoo. 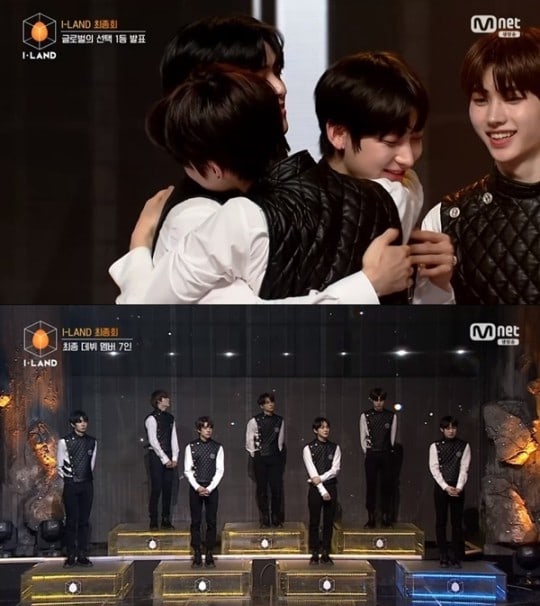 After the reveal, TXT’s Yeonjun said, “First off, you were all so cool. I know how hard you worked to make it this far. There are people I trained with here, and I want to say congratulations and you worked hard. To the applicants who are here, I hope you’ll use your experiences so far as a stepping stone to become greater artists in the future.” 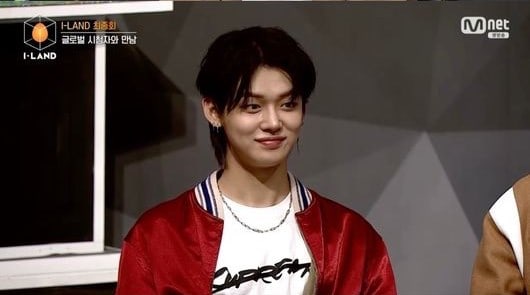 During the show, 22 of the show’s trainees reunited on stage to perform the show’s theme song “Into the I-LAND.” Watch their special performance below!

BTS
TXT
I-LAND
How does this article make you feel?