Girls’ Generation’s Seohyun and Go Kyung Pyo appear to act out an homage to their fan-favorite moment in a new teaser for the JTBC drama “Private Lives”!

The upcoming drama takes place during the current age in which people share, steal, and fabricate their private lives. It’s about con artists mobilizing all their techniques to disclose the nation’s major “private life,” and it stars Seohyun, Go Kyung Pyo, Kim Hyo Jin, Kim Young Min, and more.

When Seohyun did an Instagram Live broadcast from the filming set back in June, Go Kyung Pyo popped in to say hello, and fans loved their chemistry, dubbing them the “Pangyo Newlyweds.” The nickname is a reference to how many fans think they look like a young professional newlywed couple living in the planned town of Pangyo, a tech cluster outside of Seoul. 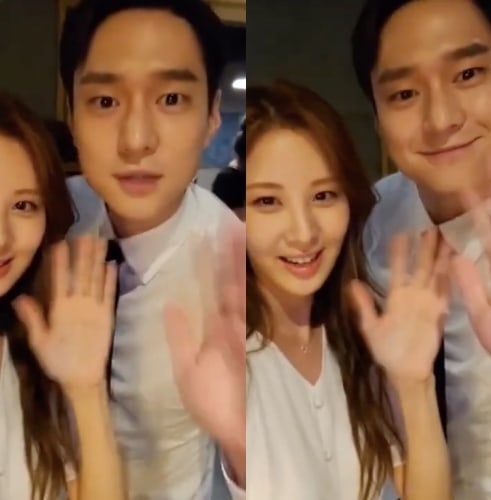 The new teaser opens with Seohyun seemingly doing a video call (or live broadcast!), calling Go Kyung Pyo by his character name Jung Hwan, as she did in the Instagram Live. Go Kyung Pyo wears a dress shirt and black tie, just like he did in the broadcast, and he’s busy talking to someone on the phone but he smiles at the camera. He then gives Seohyun a sweet kiss on the head before leaving the shot.

The clip then switches to highlighting the chameleon-like skills of their two characters, showing them perfectly pulling off various personas as they change outfits and looks. Seohyun’s character Cha Ju Eun is described by her tagline “Con artist by lifestyle,” while Go Kyung Pyo’s character Lee Jung Hwan is referred to as “a man with an unknowable identity.”