Rather than the usual “Idol Star Athletics Championships,” which could not film indoors due to social distancing guidelines, MBC is airing two spin-off shows this Chuseok holiday season. The eSports event from the championships was turned into a stand-alone special that aired on October 1, and idols and their pet dogs also teamed up for the “2020 Idol Star Dog-agility Championships –Chuseok Special” that airs on October 2.

“2020 Idol Star eSports Championships – Chuseok Special” was MCed by Super Junior’s Shindong, Hong Jin Young, and broadcaster Jeon Yong Joon. The competition was held outdoors with no audience, and the participating idols were separated by protective booths as a precautionary measure. 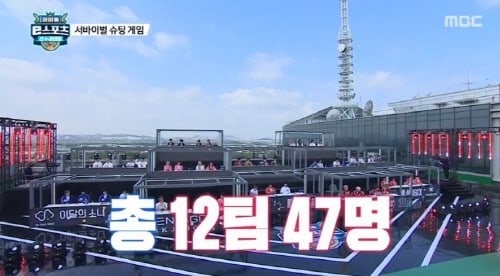 First off, the players went head to head in an individual game between 47 idols. SF9’s Dawon was taken out right at the start, and NCT Dream’s Jaemin was also eliminated, which shocked many as he had been seen as a potential winner. IZ*ONE’s Yabuki Nako, Kang Hyewon, and Miyawaki Sakura all showed outstanding skills. After being crowned a winner in the “2020 Idol Star Athletics Championships – New Year’s Special,” Ha Sung Woon also put up a good fight, but he lost steam and was eliminated too.

The final three left in the game were NCT Dream’s Chenle, Miyawaki Sakura, and Park Ji Hoon. Park Ji Hoon was taken out after attacks from both other players. In the end, Chenle took the win. He said, “Everyone who took part is so great at this. I’m lucky to have been able to come in first, and it’s an honor.” 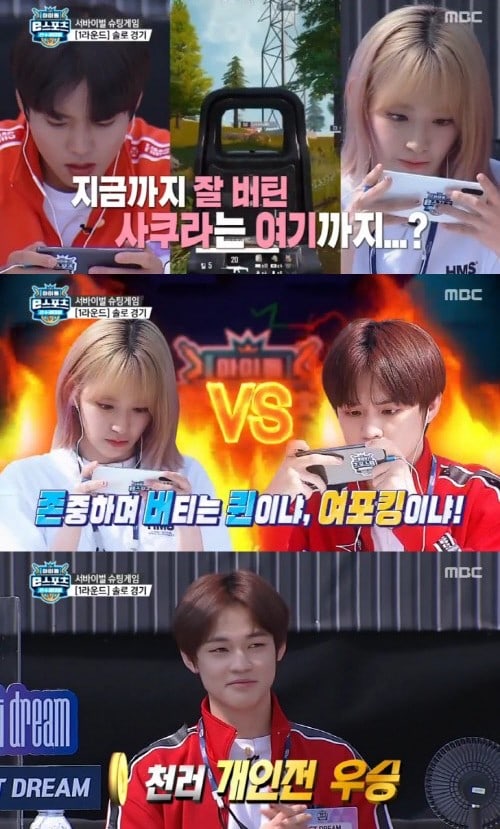 Next up was a second game of PUBG between the squads. Park Ji Hoon had the edge over everyone in the first round of the squad game. AB6IX’s Lee Dae Hwi also remained as one of the two final survivors. However, he was soon hit by Park Ji Hoon and eliminated. After Park Ji Hoon racked up eight kills, his team came in first. 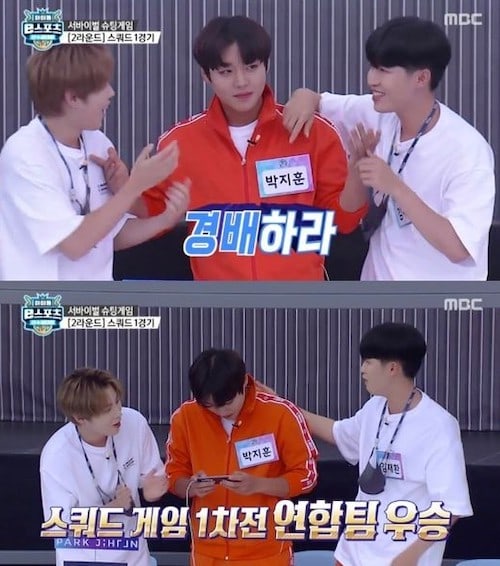 In the second round, PENTAGON’s Wooseok made everyone laugh when he ignored his team members asking for help and survived on his own. The united team quickly finished farming and started killing, and Park Ji Hoon impressed with his confident gameplay. While driving a car in the game, Miyawaki Sakura came across N.Flying, who blew up IZ*ONE’s car and completely eliminated them.

N.Flying and the united team also went head to head. However, due to Ha Sung Woon firing by accident, the united team was all taken out. NCT Dream also impressed with their gameplay. Chenle fired at Golden Child’s boat and wiped them out, scoring five kills. In a final close match with LOONA and GWSN, N.Flying won, with Yoo Hee Seung particularly working hard for the team as their final survivor.

The overall winner was therefore N.Flying, with the MVP (Most Valuable Player) named as Seo Dong Sung, who it was previously announced had ranked in the Top 100 in Asia. N.Flying won the gold medal, a Korean beef set, and a mask donation benefit. Seo Dong Sung said, “I didn’t expect this at all. I play about one or two hours before bed. It’s my only hobby.” 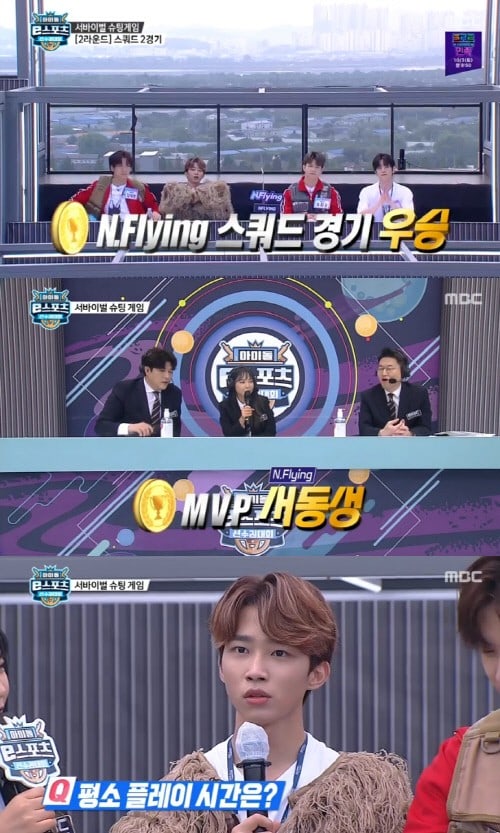 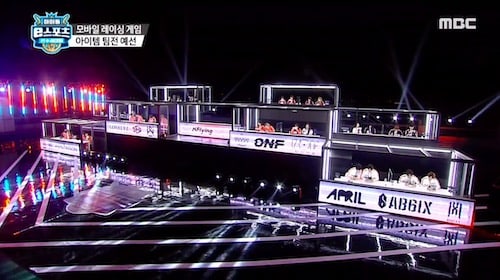 In an individual player speed matchup, there were four players in the A Group who were determined to be “legend tier,” and everyone was curious to see who would take the win. WEi’s Kim Dong Han came in first and ONF’s MK grabbed second, meaning the two of them both made it to the finals.

First and second place in the B Group went to IZ*ONE’s Choi Ye Na and Kwon Eun Bi, and in the C Group to NCT’s Jungwoo and ONF’s Hyojin. D Group winners NCT’s Jeno and WEi’s Kim Yo Han also advanced. 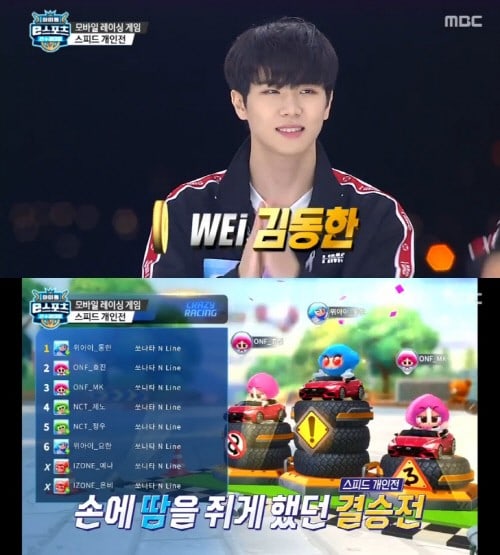 The next game was NCT versus N.Flying and SF9. Jungwoo was in the lead but pressed the reset key at a decisive moment and NCT lost, with SF9’s Youngbin and Jaeyoon securing the victory for their team.

The finals were between the N.Flying and SF9 team and the MONSTA X and PENTAGON team, with the latter taking the win. Minhyuk said that they hadn’t expected they would do so well, saying that they ended up having great teamwork. “We won thanks to Wooseok,” he said. Wooseok in turn gave credit to Minhyuk and Kihyun. 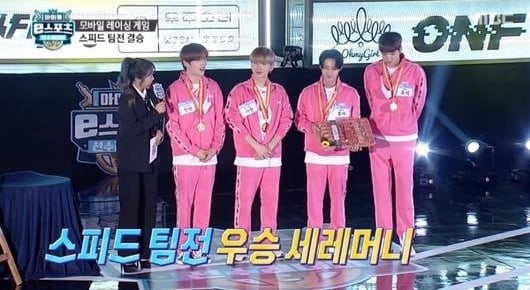 Finally, the competitors faced off in an item race. The semifinals for this round included the teams NCT, Lovelyz and Golden Child, IZ*ONE and Natty, and MONSTA X and PENTAGON. IZ*ONE and Natty had a close match with NCT in the finals. In the end, NCT took the win and Taeil shared their gratitude. 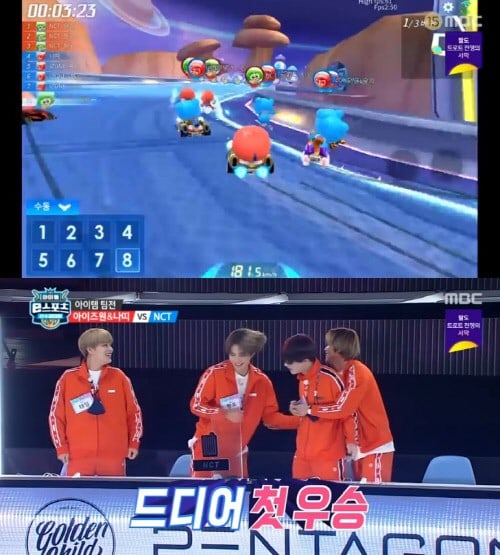 “2020 Idol Star eSports Championships – Chuseok Special” will be available on Viki. In the meantime, watch a teaser below!