He began the broadcast by welcoming fans and sharing, “Thank you for your unwavering support. I’m back.” Key also explained that the broadcast would run in two parts, hinting that he would later be joined by a guest.

The guest turned out to be none other than BTOB’s Changsub, who served in the military band with Key throughout his enlistment. Key explained, “He was my military senior. I was originally supposed to do this alone, but I told him to join me after buying him a meal.” He added, “It was easier to bring him here than I thought,” making everyone laugh. 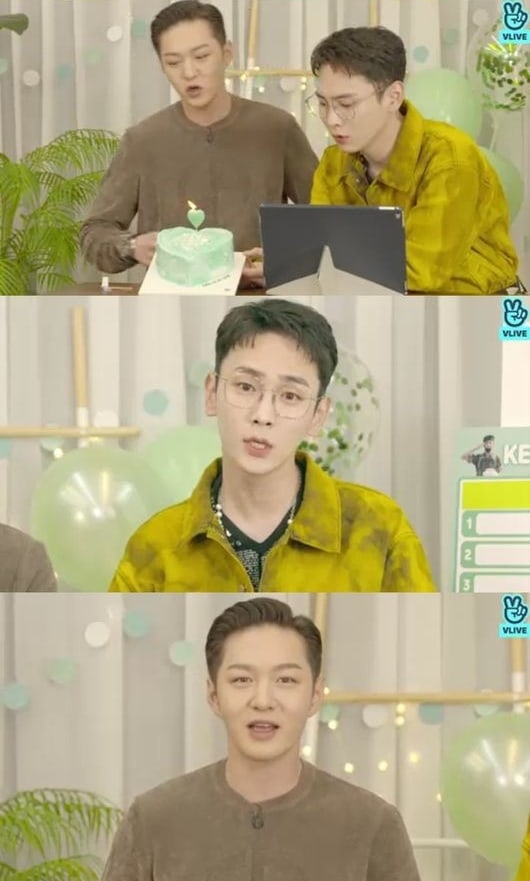 The two began listing the foods they missed most during their service, including ice cream, pork belly, chicken, spicy rice cakes, pizza, and sushi. The producers surprised the singers by preparing these listed foods, allowing them to eat to their heart’s content throughout the broadcast.

They began looking back at photos throughout Key’s military service, with many featuring Changsub. Even in his selfies, Key explained, “Changsub was always next to me. However, we couldn’t take pictures together because he fell asleep the second he could rest his head. That’s the trait I am most envious of.”

Changsub suddenly exclaimed, “I can share this now! I can share this now,” telling a story from the time Key left an important script behind. He explained, “Although it seems small, forgetting something in the military is a huge disaster.” Key adorably left a thank you message to his manager, who had to make a long trip to get it back to him.

Fans began asking whether they sang each other’s songs while working together and they responded, “We didn’t as much as you’d think. We thought, ‘While promoting as a singer, we are performing war songs and ‘Bravo, My Life.'”

Key continued, “He sang it so extravagantly.” Changsub added, “There were many times when I did something embarrassing and Key would tell me, ‘Why do you make the mess but it’s me who has to feel embarrassed?'” Key explained, “I often couldn’t tell if he was singing as a joke or very seriously. I’m supposed to sing back to him but I had to get myself under control. There was one time when I even covered one ear to stop myself from laughing.” 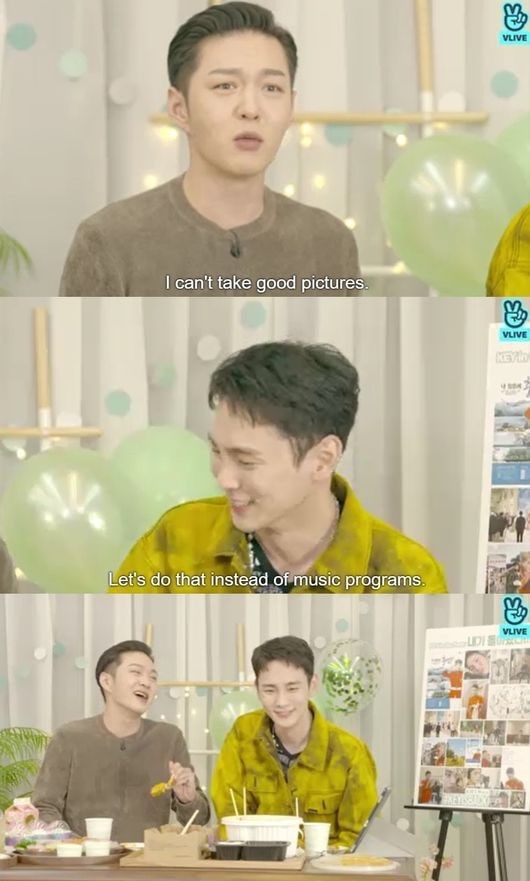 Next, the stars talked about the top five things they wanted to do now that they were done with their military service. Key revealed, “Deviating is something you want to do because they tell you not to. We genuinely went by the book and didn’t do anything they told us not to do,” with Changsub agreeing.

As No. 5, the two picked “putting our hands in our pockets.” Key explained that doing so was against the rules, commenting, “I think it’s because when we’re outside, soldiers must maintain that tidy and neat look.” They excitedly put their hands in their pockets, exclaiming, “Catch me if you can!” Key hilariously remarked, “Someone asked if there was alcohol in our rice cakes!”

Next, they answered “taking our hats off outside,” sharing, “In the summer, there wasn’t a single time we took off our hats, because we couldn’t get caught.” Key showed off the various ways he can put his hats on now, as Changsub explained, “We’re just unwinding.” Key jokingly added, “I think I’ve gone crazy. Can someone put me under anesthesia please?”

What they wanted to do most was to skip meals, revealing that they were not allowed to not eat. Changsub shared, “If I really didn’t want to eat, I’d go in and grab one spoonful of everything. But I had to at least do that, because eating is listed as a part of our training.” Key explained, “For over 10 years, there’s never been a time where I’ve diligently ate three meals a day, because our meal schedules are so random. I couldn’t get used to it. I remember being thrown off by so many minor rules, but everything has a reason.”

Near the end, the two were scrolling through fans’ comments when they stopped at a familiar name. Much to the amusement of viewers, they confusedly remarked, “Huh? Our squad leader is watching right now. This is real.”

Watch Key in “Drinking Solo” with English subtitles below!

SHINee
BTOB
Key
Changsub
How does this article make you feel?