BTS Extends Record As They Hit Landmark 200th Week At No. 1 On Billboard’s Social 50

The Social 50 chart ranks artists based on data from music analytics company Next Big Sound, and it shows the most popular artists on Facebook, Twitter, Instagram, YouTube, and Wikipedia. It determines the ranking through a combination of weekly additions of friends/fans/followers with artist page views and engagement.

Back in February, BTS broke Justin Bieber’s record for the most nonconsecutive weeks at No. 1 on the Social 50 chart when they reigned at the top of the chart for the 164th week.

On the Social 50 chart for the week ending in October 17, BTS logs another week at the top, bringing them to the milestone of 200 nonconsecutive weeks at No. 1. 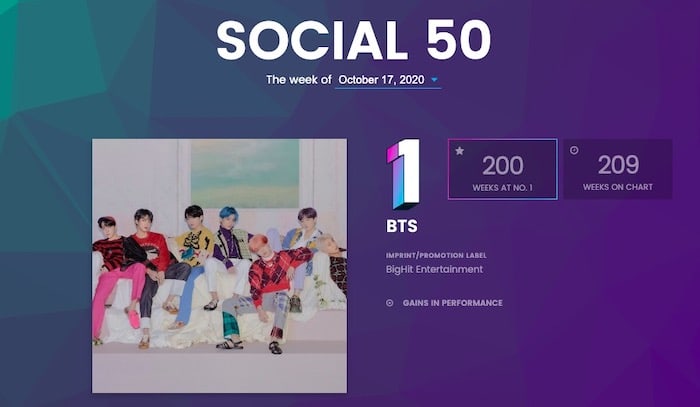 BTS will be performing at the 2020 Billboard Music Awards on October 14, and they’re nominated for two awards: Top Social Artist and Top Duo/Group. BTS has taken the title of Top Social Artist at the award show for three years in a row starting in 2017, and they also won Top/Duo Group last year.

Meanwhile, the group is gearing up to make a comeback on November 20 with the album “BE.”