Red Velvet’s Seulgi Talks About Her Hobbies And Plans, Describes Why Beyoncé Is Her Role Model, And More

Red Velvet’s Seulgi shared some insights into her life, career, and more in an interview with Esquire Korea!

The interviewer complimented Seulgi on the photos on her Instagram and asked who takes most of her photos. Seulgi answered that they’re often taken by friends or by her younger cousin. “We’re really interested in photography so we tend to photograph each other,” she said. “We’re learning how to take photos while wandering around together.”

In Seulgi’s interview with the magazine last year, she’d talked about how she’d recently bought a film camera, so Esquire asked if she’s become good at using it. “Honestly, I couldn’t say I’ve improved,” Seulgi said. “There are times when I think that a photo is going to come out really cool but once it’s printed I see that it’s out of focus or too dark. It’s a bit upsetting when that happens. It’s true that nothing’s easy.” 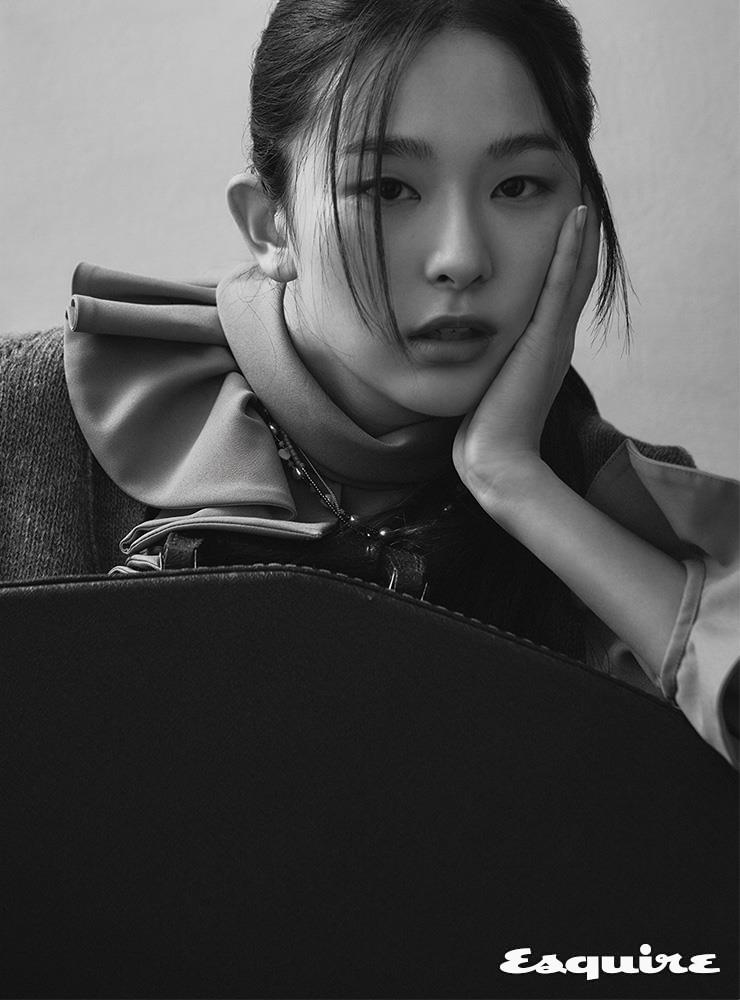 When looking back on this year, Seulgi said, “Because of COVID-19, I had more time this year compared to other years. At first, my mindset was that I should rest a bit, and I met up with my parents and friends. But I didn’t know it would go on so long. Since I have the time, I’ve watched a lot of videos of my performances, and I’ve been noticing imperfections that I hadn’t caught before. It makes me think, ‘It would have been better if I’d done it like this instead.’ So I’ve been studying dance and also enjoying my hobbies.”

Seulgi shared that she’d like to take on the challenge of trying a softer and looser style of dance than her usual style. “I did learn ballet and jazz when I was really young, but I’ve forgotten it,” she added. 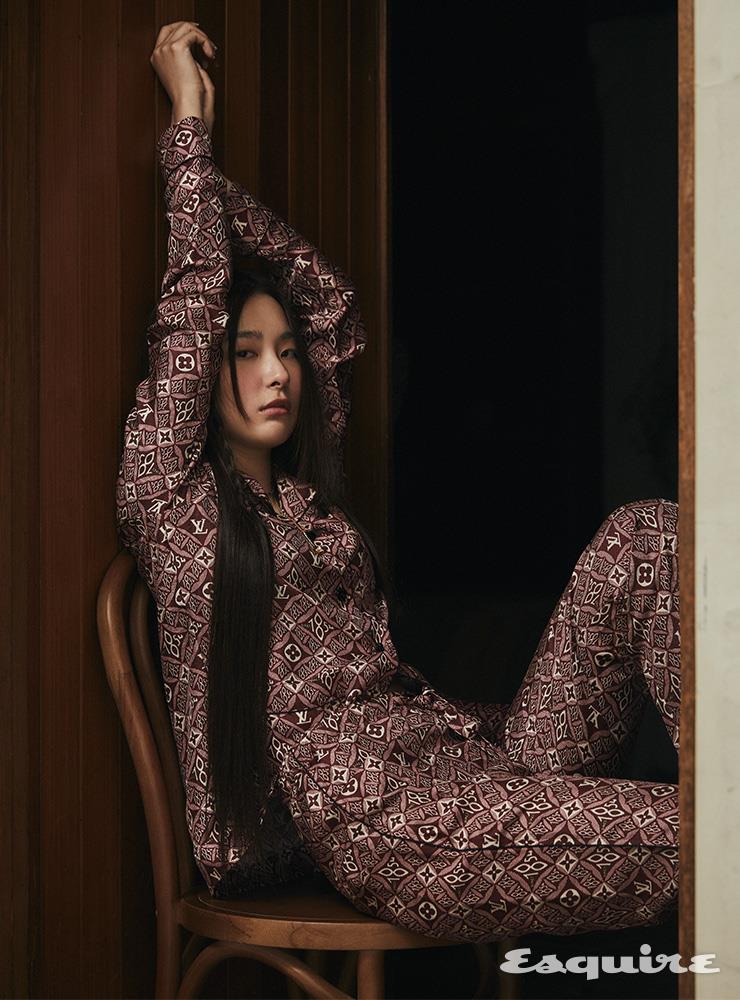 Seulgi and her fellow Red Velvet member Irene debuted as a sub-unit this summer, and she was asked how their unit promotions went. “To be honest, I was confident, since Irene and I have worked together for so long,” she said. “I think it was really meaningful that we were able to show our chemistry. Everything about it was precious, including the time we spend preparing.”

“To be honest, I was a bit surprised when I first saw the ‘Monster‘ concept,” she admitted. “It has a very distinct style to it. But in the end, I really like it.” 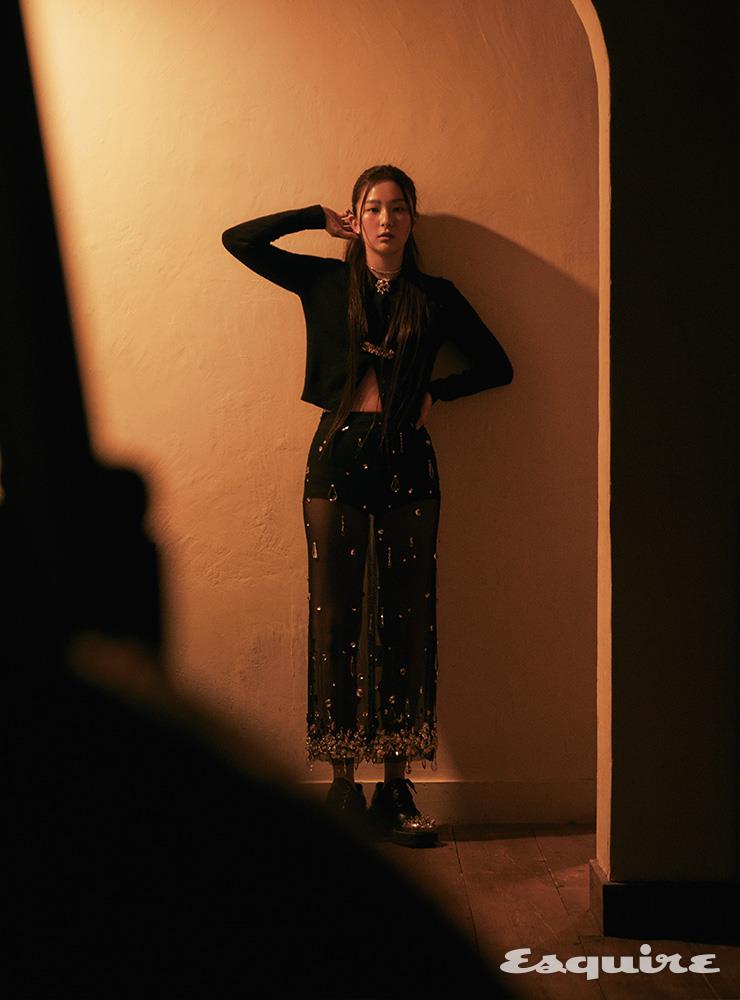 When the interviewer stated that they were sad that the unit’s promotions had been short, Seulgi said she felt the same. “We performed for two weeks but we worked really hard preparing it for a few months,” she continued. “But I have no regrets, because although it was short, I put my all into it.” She added with a laugh, “It might have been really exhausting if we’d promoted for a long time too.”

Esquire described Seulgi as very charismatic in the performances, mentioning how she glared fiercely at the camera at the end. Seulgi laughed and said, “That’s right. It was a concept where we had to put on expressions that looked truly angry. I also practiced a lot in the mirror.”

She shared that in addition to working on their expressions, they’d also focused a lot on fine-tuning their dancing and coordination. “Ah, I was so proud when other idol groups covered us too,” she said. “They’ve not only done ‘Monster,’ I’ve also seen them do ‘Naughty.'”

When asked to talk about her hobbies and traveling, Seulgi said, “I want to go to Hungary, Budapest. I recently saw the film ‘Gloomy Sunday,’ and the restaurant in that film is in Budapest. If you go there, you have to try the beef roll.”

“I also want to travel around to every corner of Korea too,” she said, sharing that there are many beautiful places to visit in the country. 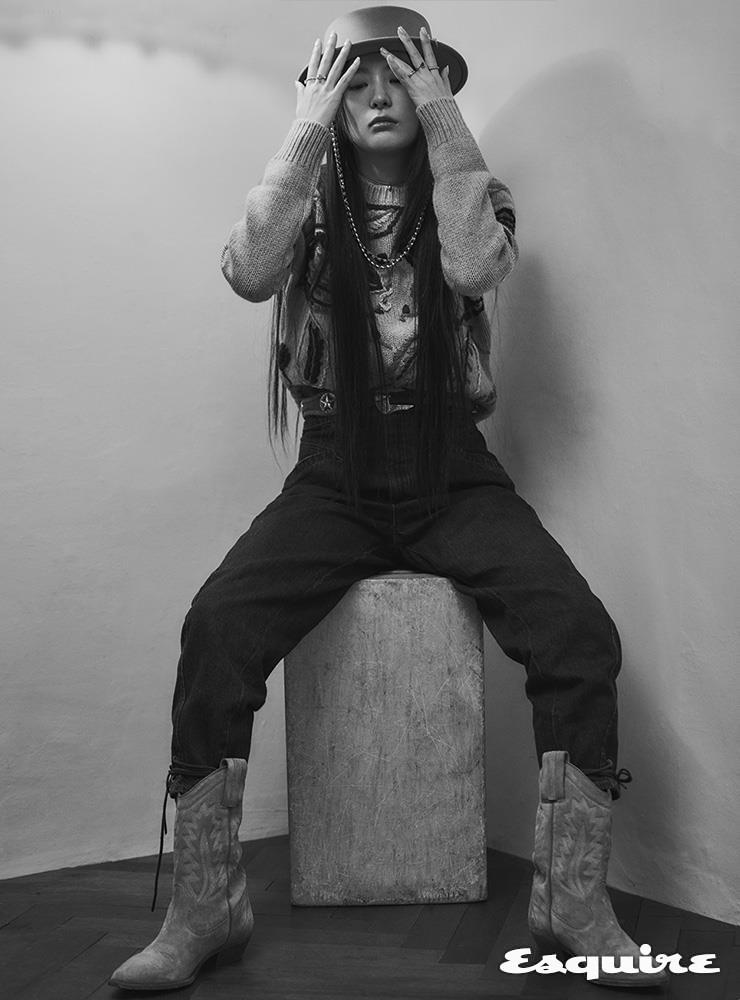 Since Seulgi often names Beyoncé as her role model, Esquire asked her if there’s any particular story behind that.

“When I was a trainee, my dad showed me a video of Beyoncé’s concert,” she said. “I remember it being a ‘Run the World’ performance. It was a time in my life when I was thinking a lot about what kind of songs I like, and I fell in love at first sight when I saw the Beyoncé video. She had an aura that made even that huge stage seem small, and I was really impressed. So I looked up everything about her, not only her songs but also cover videos too. I became determined to become a great singer like that. It’s my dream to stand on the same stage as her, if I get the chance.”

Finally, Seulgi was asked to share her plans for next year. She answered that she doesn’t usually end up sticking to her resolutions, so she doesn’t have any particular plans. “I’ll write down something like, ‘Seulgi, you’re lacking when it comes to this. I hope that you’ll do it in such-and-such a way,’ but actually doing that is hard,” she said. “I recently got a workroom and started recording too. I’m still in the learning stage, but I want to keep recording and write songs as well.” 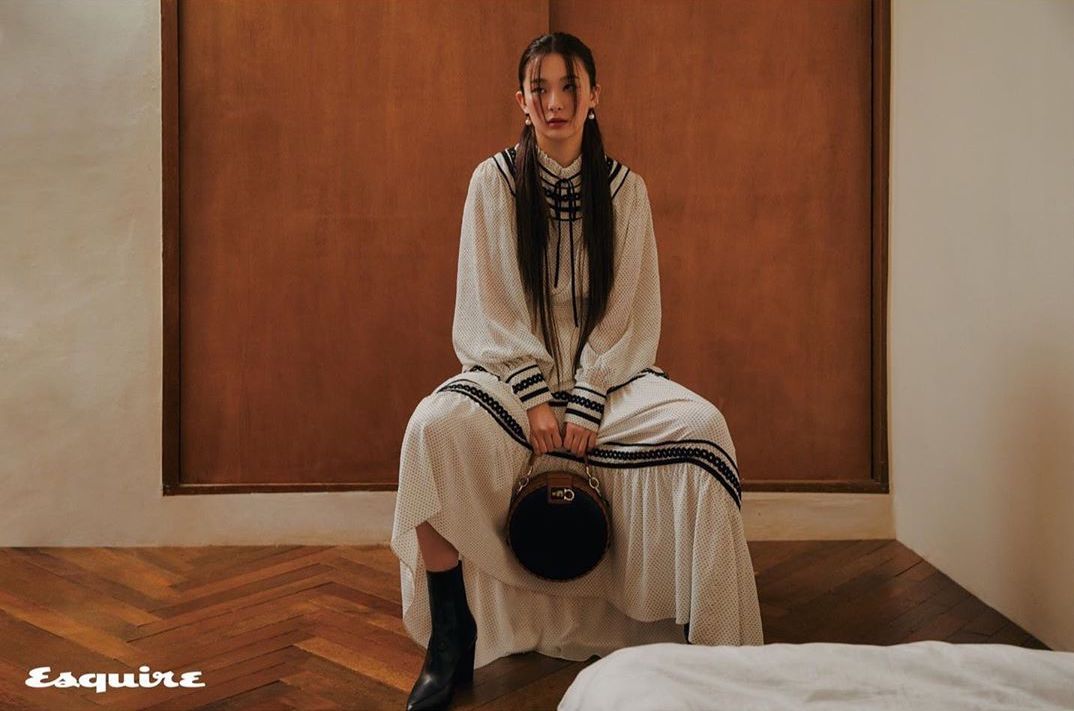 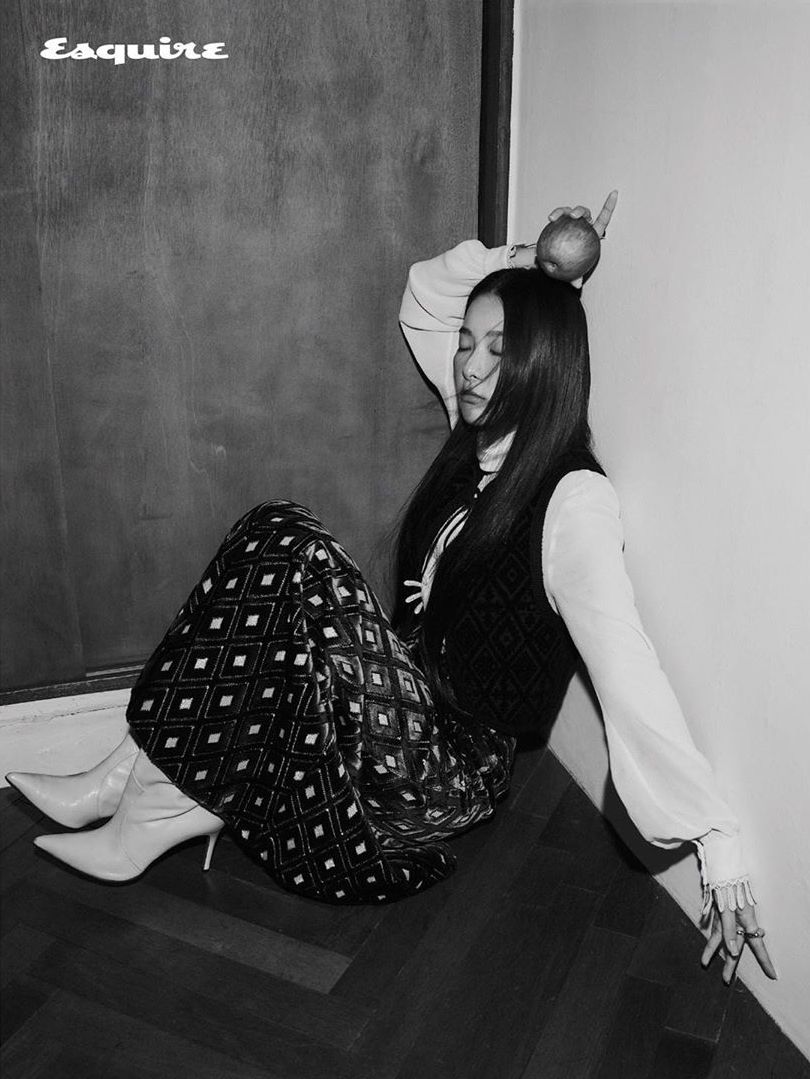 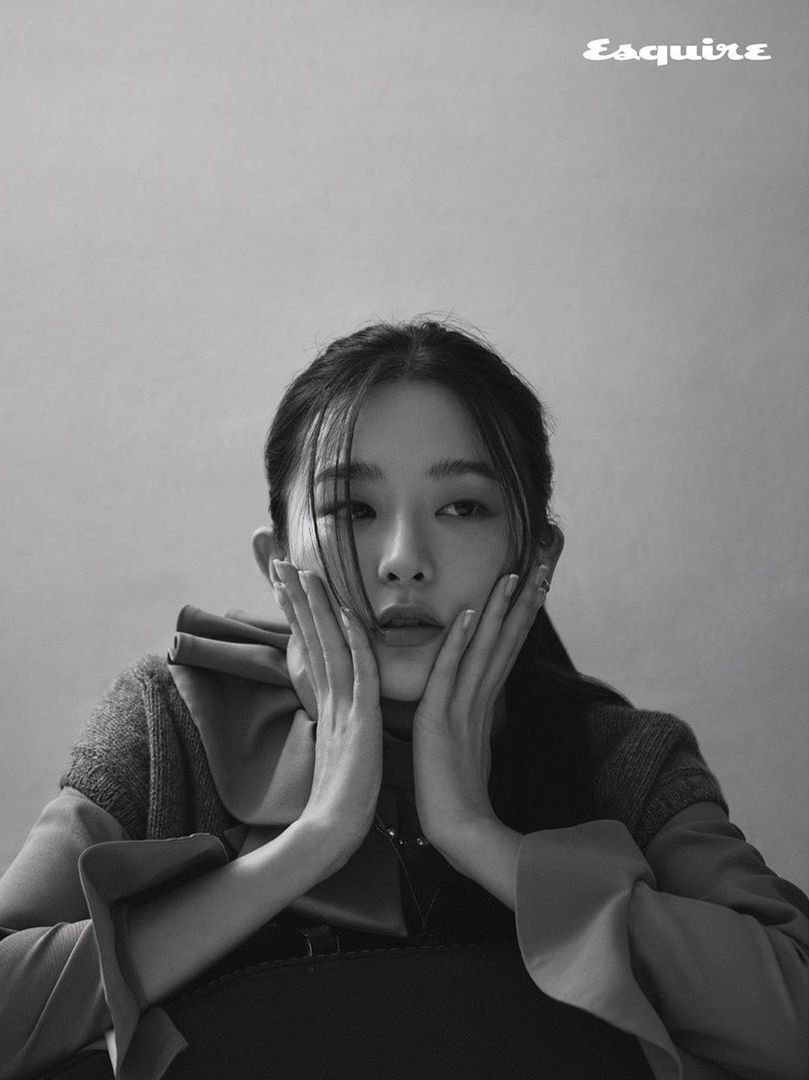 Seulgi’s full interview and pictorial appear in the November issue of Esquire Korea.

Red Velvet
Esquire Korea
Seulgi
How does this article make you feel?