Update: BTS Gears Up For New Album “BE” With Handwritten Postcards From Suga And J-Hope

BTS’s Suga and J-Hope have shared their own postcards for ARMY ahead of the release of the group’s upcoming album “BE”!

Their postcard was shared with the following message:

Today I just couldn’t stop thinking about you, ARMY. So I’m writing this letter thinking of you. I’ll be waiting for your reply!

Suga wrote in his postcard, “I’ve gotten into guitar these days. When I play the guitar, my unnecessary thoughts and concerns go away, which I like! Dear ARMY, what does BTS mean to you?” 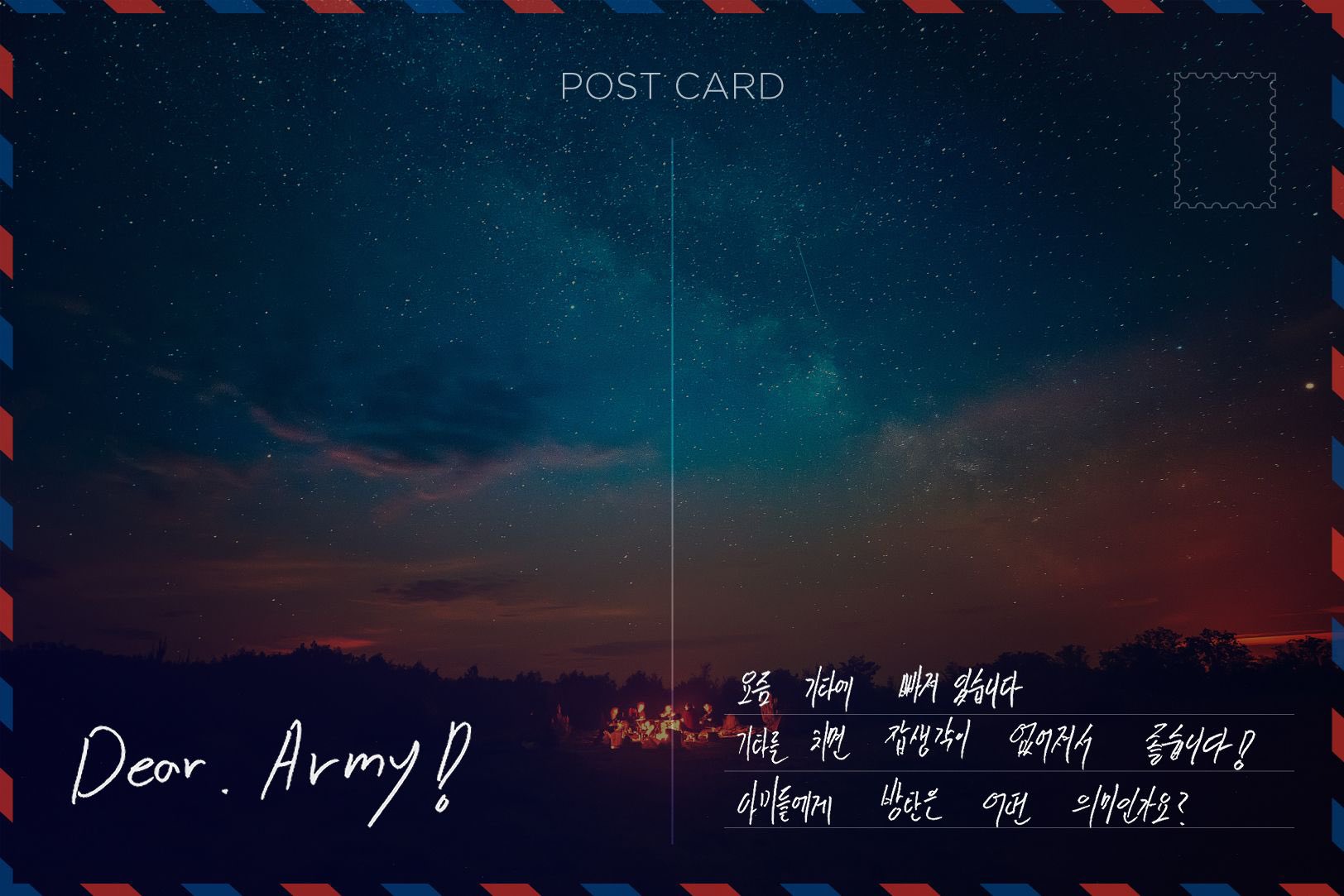 J-Hope wrote, “To be honest, I think it’s because of all of you that we were able to make it up until this moment. I’m really grateful to you for always remaining by our side and being together with us. And I miss you a lot!! Dear ARMY, what are the words that give you the most comfort?” 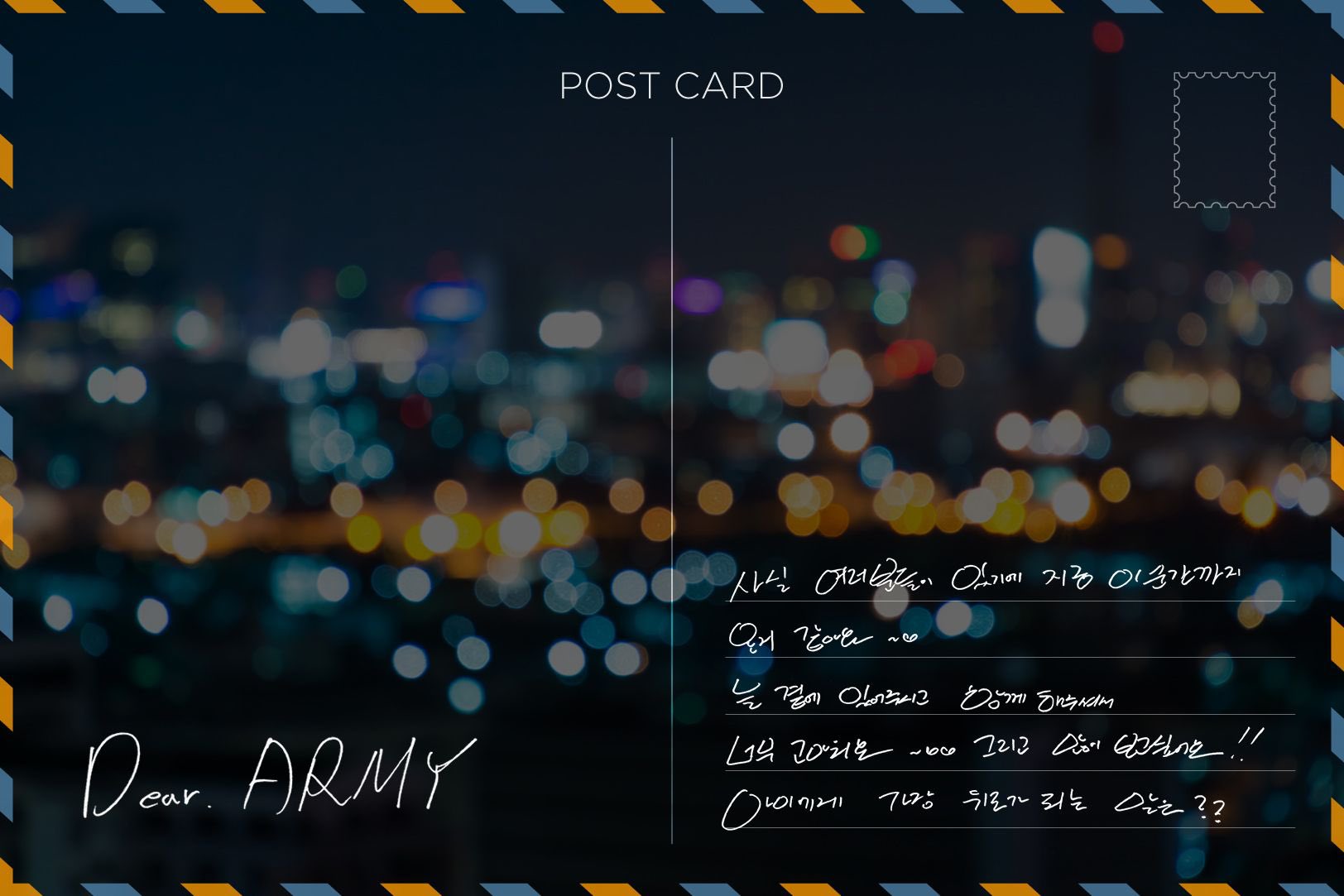 BTS’s Jungkook and Jin have now shared postcards for ARMY as part of the run-up to their new album “BE”!

Their postcards were shared with the message, “I was waiting for the day we meet ARMY again and I scribbled down some things I want to ask you when we meet again. Hope you get this message. Best wishes.”

Jungkook wrote, “I realized once again during our concert that singing and dancing in front of ARMY is the reason I exist. Dear ARMY, what would BTS be remembered as in your life?” 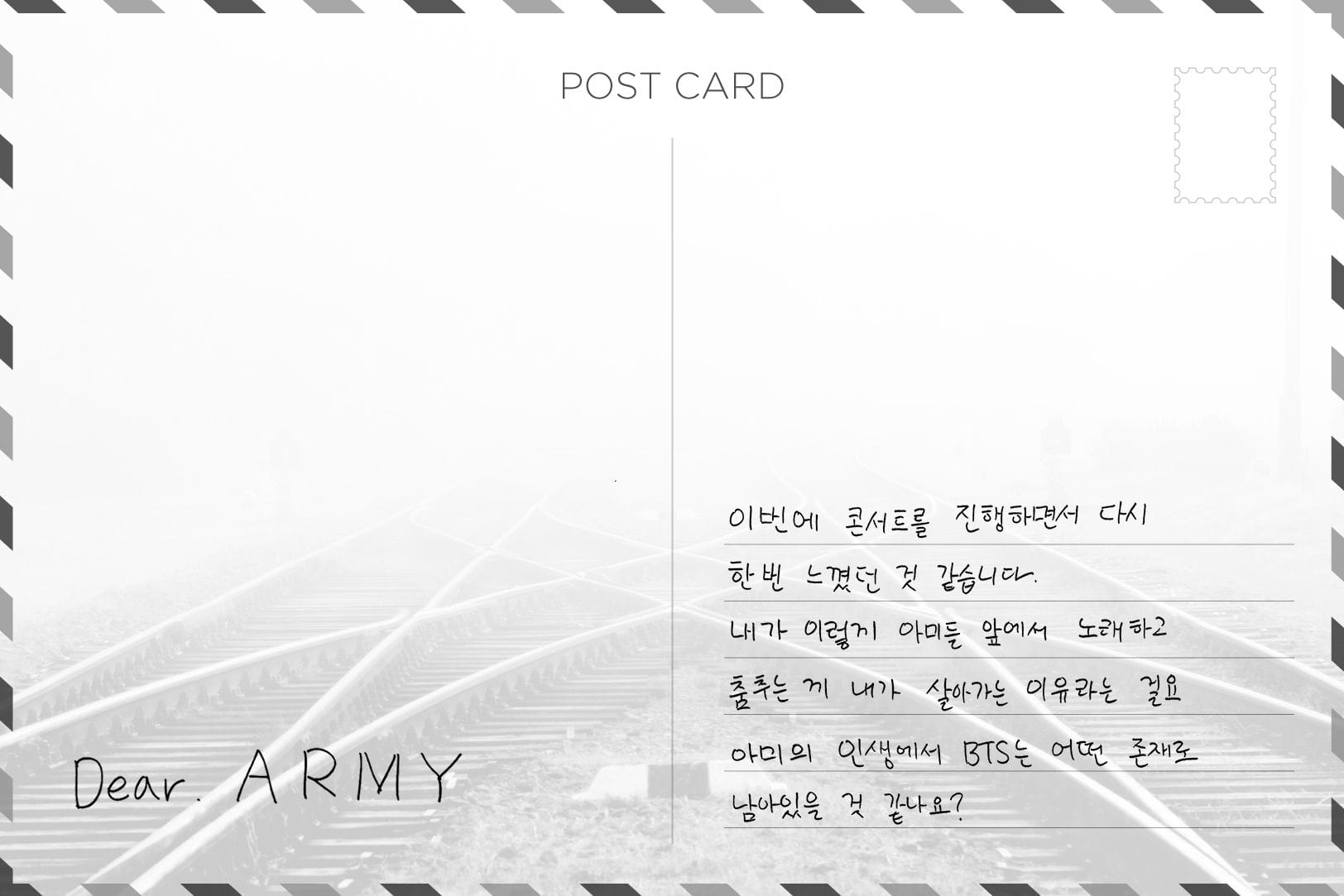 Jin‘s postcard reads, “After working hard I’m now taking a break not really by our own choosing, but then now I feel like I’m in tip-top shape. Dear ARMY, don’t forget to take a break even if you’re busy! Q. What’s your happiest moment?” 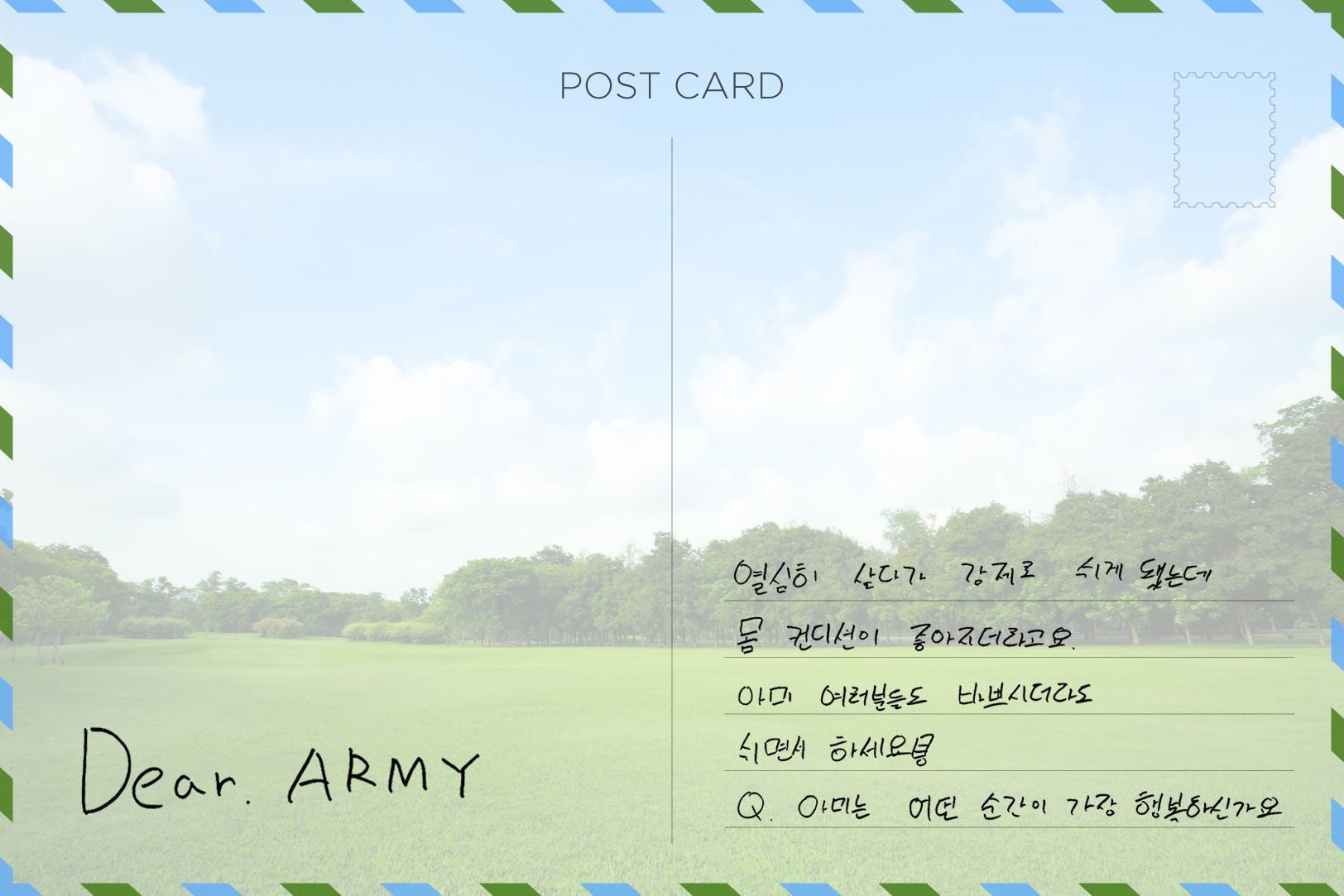 BTS has shared postcards for their fans ARMY as part of the lead-up to their new album “BE”!

On October 28, the group shared the following letter with the hashtags #Dear_ARMY, #From_V, #From_Jimin, #From_RM, and finally #BTS_BE, linking the post to the group’s upcoming album.

On Weverse, postcards from members V, Jimin, and RM were shared along with the message: “ARMY, please send your reply to BTS members with the hashtag #TO_BTS on Twitter!”

V’s postcard reads, “There were moments while working on my music when I felt stuck. I went to see ARMY every time that happened. Dear ARMY, when do you feel the happiest? What are some moments that make you go, ‘I’m so happy right now’? (Other than our songs.)” 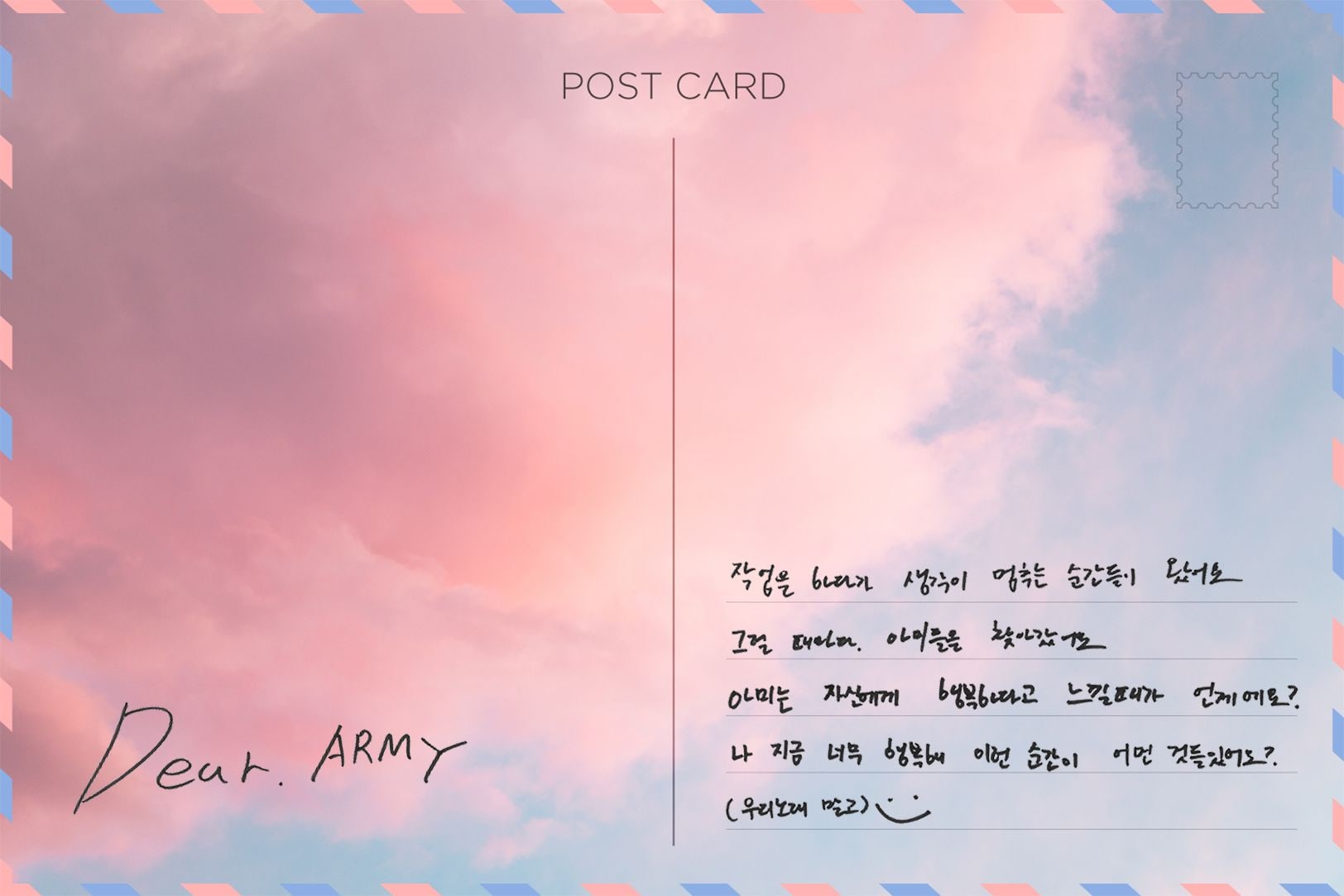 Jimin wrote, “I miss everyone who loves me just the way I am, so much. Dear ARMY, what makes you the happiest in your everyday lives, and when you’re by our side?” 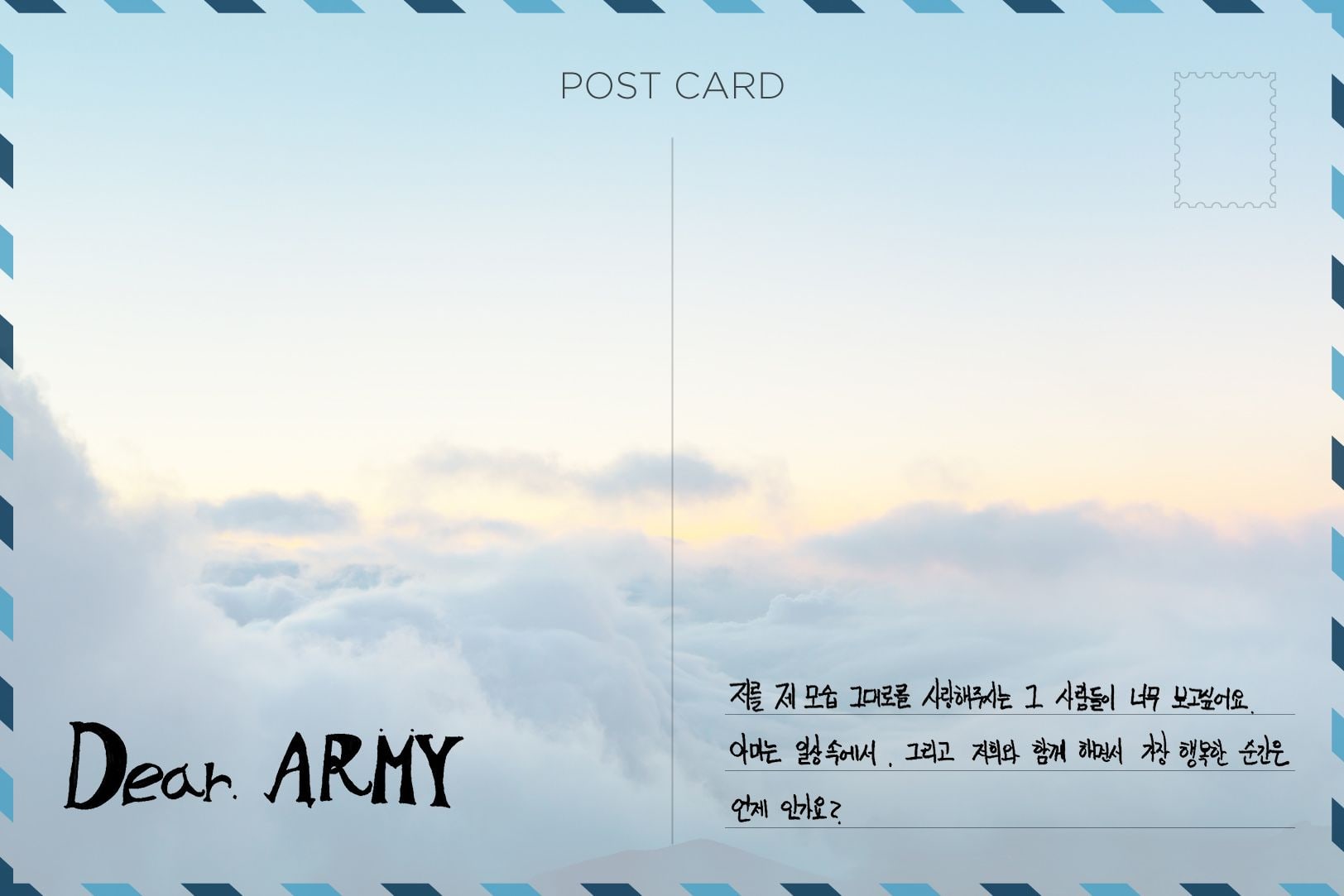 RM shared, “The happiest moment for me is not something grandiose but the moments when I open my eyes in the morning to the beautiful sky, when I smell the winter and when I’m on my bike and the breeze feels nice. Dear ARMY, when do you feel happy in your everyday lives?” 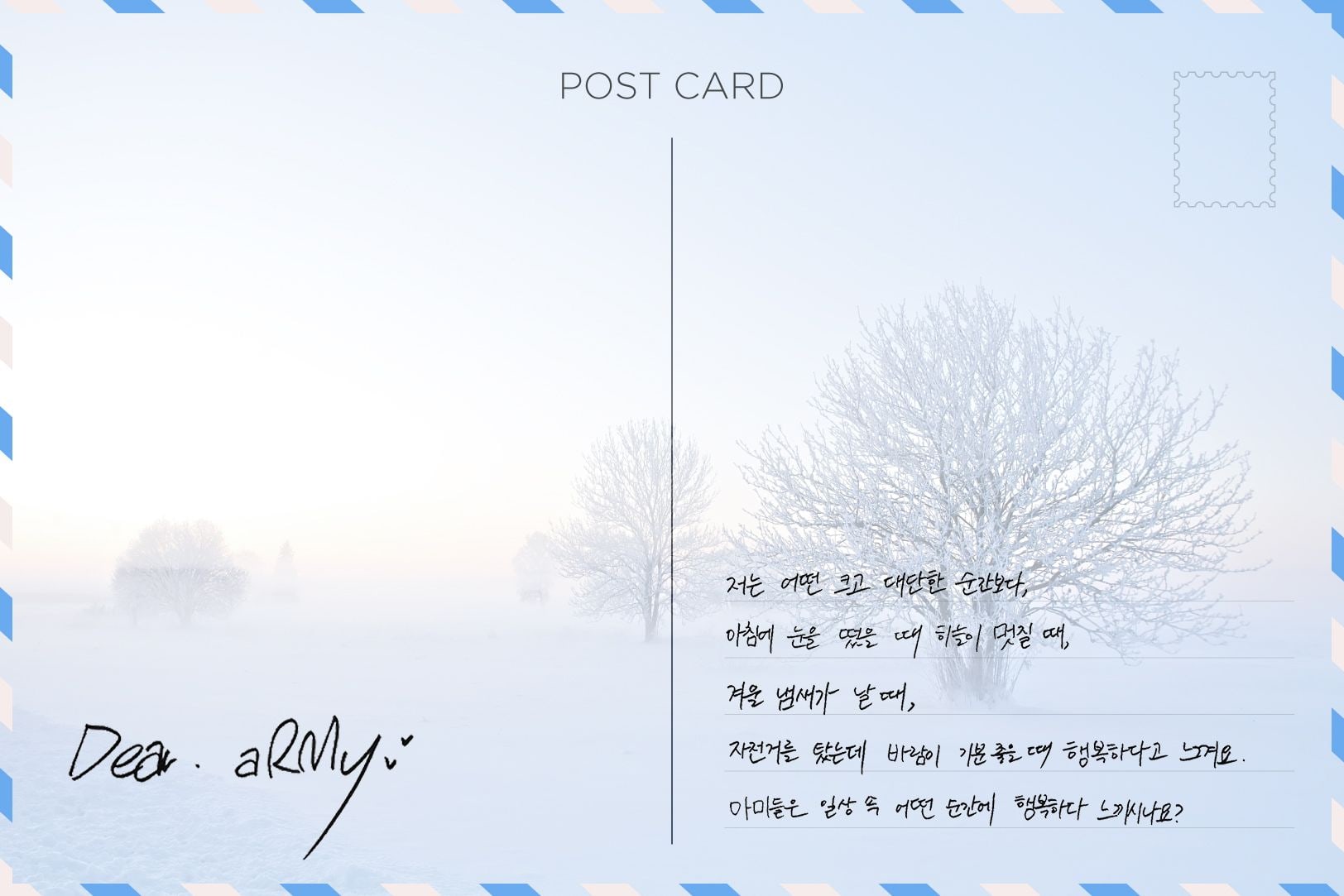 #TO_BTS soon soared on Twitter’s worldwide trends as fans responded to the letters and shared their reactions.

#TO_BTS is trending #1 (with Dear BTS and Run BTS) worldwide as @BTS_twt ask ARMY what makes them happy and their Army, answers it

“so i thought maybe the keyword could be ‘a letter’. we hand-write letters too. but if the song could be a letter, we can communicate that way”

so it was yoongi who came up with the idea of writing handwritten letter for us ?? #TO_BTS #Dear_ARMY
pic.twitter.com/TxOfvSmW38

BTS’s new album “BE” comes out on November 20. The members have directly taken part in creating their new album, including not only the music but also the concept, design, and more.