TWICE Tells Stories From Their Career, Shares Who They Think Will Get Married 1st And Last, And More

TWICE took over “Radio Star” with fun stories and more!

On October 28, TWICE appeared on the MBC celebrity talk show as part of the promotions for their latest album “Eyes wide open.” Jeongyeon unfortunately could not participate as she is on hiatus for health reasons. 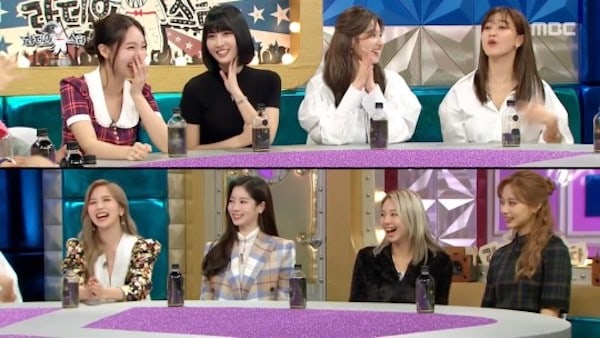 Many of the members took part in writing lyrics for their new album, and Sana spoke about how she wrote lyrics on her own for the first time for this release. She shared, “I write lyrics in Korean, and even if I go to Japan, there have been times when I think in Korean and then translate it into Japanese when I’m speaking. I even mix in Korean when I’m talking to my mom on the phone.” Mina said about the Japanese members, “There are times when we think we’re speaking in Japanese but we use Korean words too.”

Tzuyu said, “I learn Korean from the Japanese members. They’re good at concentrating and are also good at the language.” 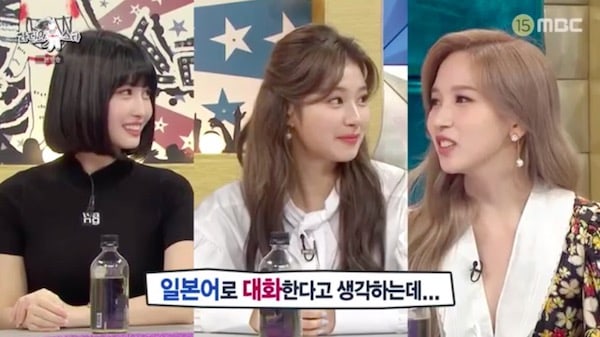 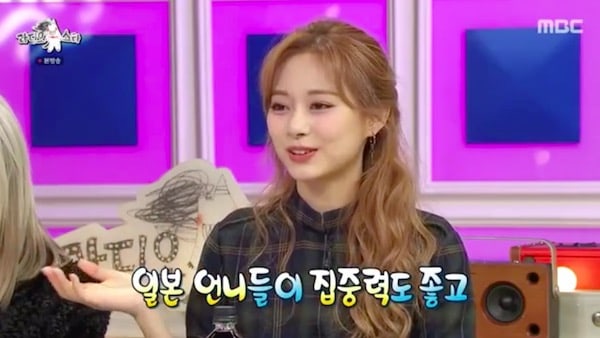 The group was also asked about who has the “killing part” in their new song “I CAN’T STOP ME.” Dahyun said, “I think it’s Tzuyu. The intro is the most important part, and it looks so pretty when Tzuyu starts out at the beginning.”

Momo shared, “I clapped when we got the choreography for our new song.” She explained that after doing cute dances when they first debuted, they’re now doing more powerful and difficult choreography, which she prefers. Tzuyu added, “I like it, but it’s difficult this time too.” 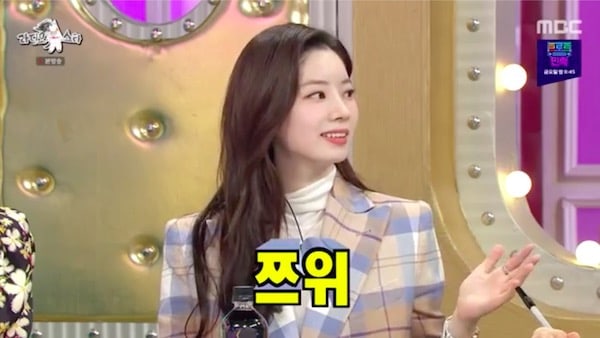 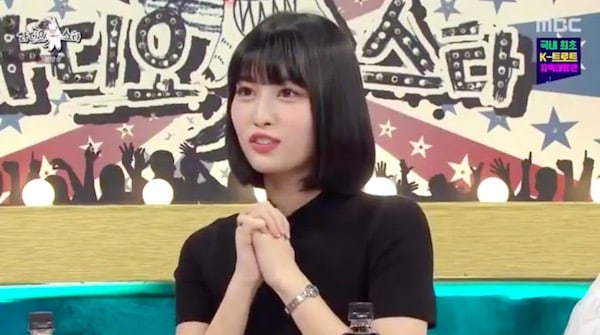 TWICE shared that they don’t have plans for solo or unit promotions for the time being. Jihyo said, “We thought it would take the focus away from group promotions. We want to keep promoting as a group for as long as possible.” The hosts then made the group laugh when they said that Chaeyoung had revealed that she wants a unit. Chaeyoung explained with a laugh, “Nayeon has ambitions about rapping. If we were to do it, I thought it would be good if it were a fun rap unit.” 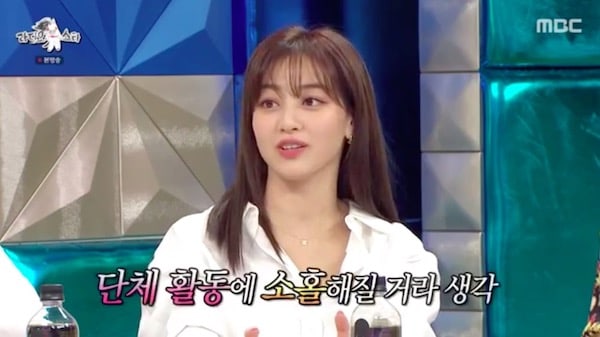 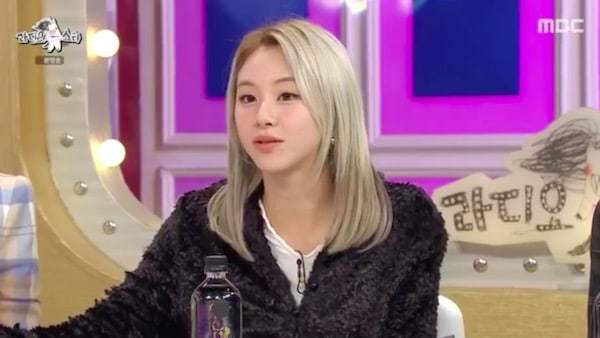 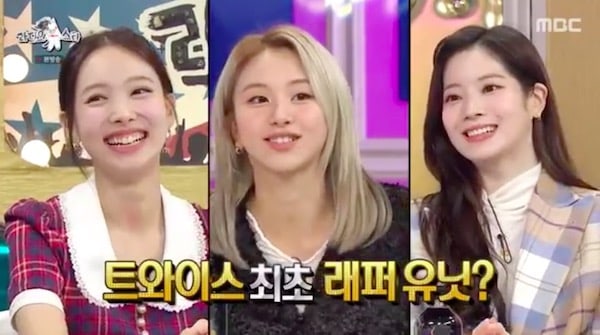 Nayeon said, “There was a time when I cried a lot when we were doing a Japanese concert tour. My in-ear monitor broke so I was really anxious when I was performing, and when we did our encore I was more relaxed so I sang while holding my mic upside down. When I realized that I thought, ‘Wow, I’m really out of it today’ and cried as the tension left me.” She shared that Jihyo had thought at the time that Nayeon was trying to be funny. 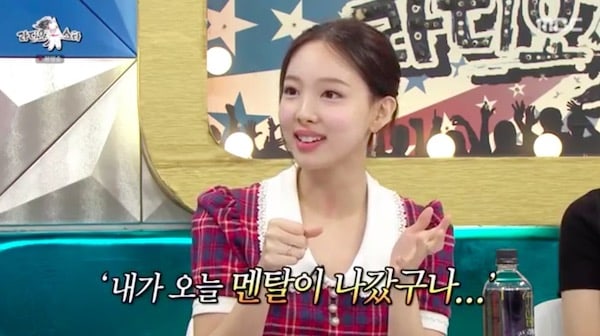 Sana told a story about speaking with her mother back in Japan. She said, “I talk to my mom a lot on the phone, and we ended up talking about the old days when I was a trainee. She said, ‘I wanted to support you when you went to Korea, but I hadn’t known that I was only going to be able to play the role of your mother until you were in middle school. I thought you’d be by my side for longer. I missed you more when you were a trainee and I was lonely, but I didn’t tell you because I was worried it might make you come home because you were concerned about me.’ I felt so sorry and grateful that I cried a lot.” 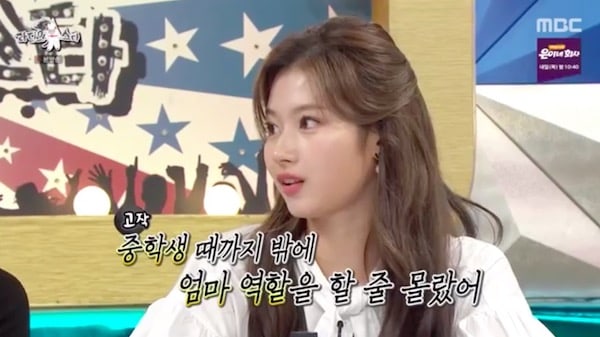 Momo spoke about how she’d got goosebumps when she recently watched a video of her performing. “When we debuted, we were so busy that we couldn’t get much sleep,” she said. “I watched a video focused on me from our first music show performance for ‘CHEER UP,’ but I was dozing. It wasn’t just me, Sana was too. It was choreography we were doing together and we were both dozing off.”

Sana added, “Momo told me, ‘We were dozing off while performing.’ I thought it must have just been her and didn’t believe her, but I watched that focused video for the first time this year and we were really dozing.”

Momo also said, “At my family’s home in Japan, my dad’s room has a space dedicated to Jihyo. My sister is a fan of Chaeyoung and my dad is a fan of Jihyo.” Momo added, “When we did a ‘hi-touch’ event in Japan, my father lined up.” The members explained that the events involve fans lining up for a specific member, and her father had been in line for Jihyo. 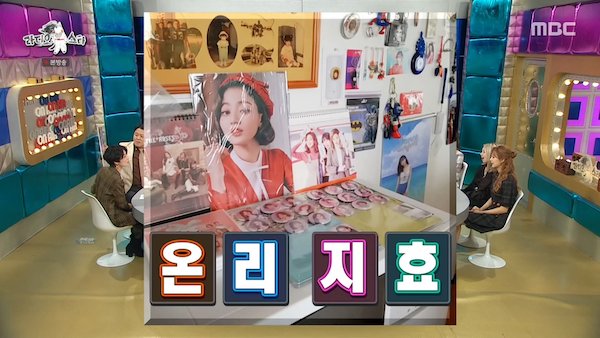 During the show, Dahyun also surprised the hosts with a unique talent that showed her flexibility! 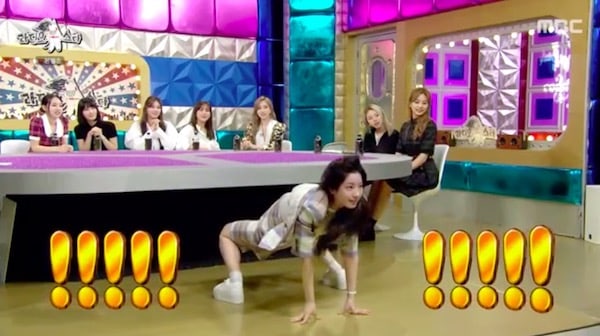 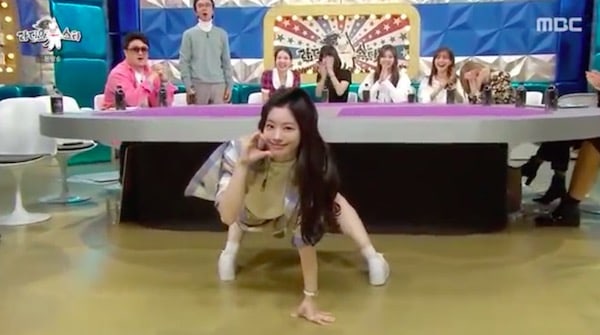 The hosts also asked Mina about how she’d said that there was a member she was scared of during their trainee days.

“When I first saw Jihyo from far away, I had to walk in her direction, but she had such an aura about her and seemed like an unni [older female friend or sister], so I waited for her to leave first before I went,” said Mina, making everyone laugh. Jihyo said in surprise, “Seriously?” Mina explained, “We’d never talked before, I didn’t even know that we’re the same age.”

Jihyo added, “Mina and I have been roommates since our debut. You’re… not scared of me now, right?” and Mina nodded. 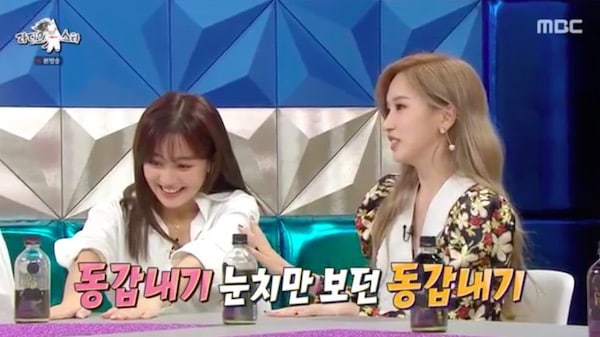 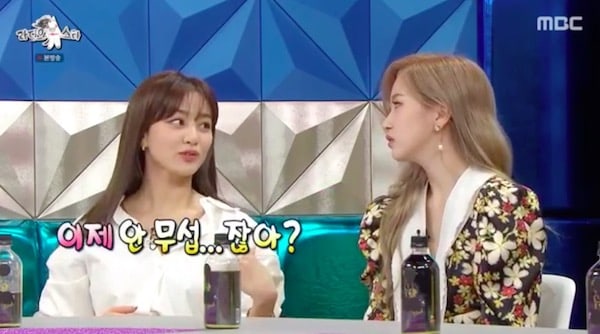 TWICE later shared some insights into who they think will get married first and last.

Chaeyoung said, “When we’re abroad, we get together in one hotel room and have a drink. One thing we always talk about is our future. We say that we want to buy a wedding dress for the first member who gets married.”

“I think that Nayeon will get married the last among us,” Chaeyoung said. “She’s a bit picky. You need to consistently put in effort in order to get her to trust you.” Nayeon responded, “I think Chaeyoung will get married first. I think she’ll just do it.” 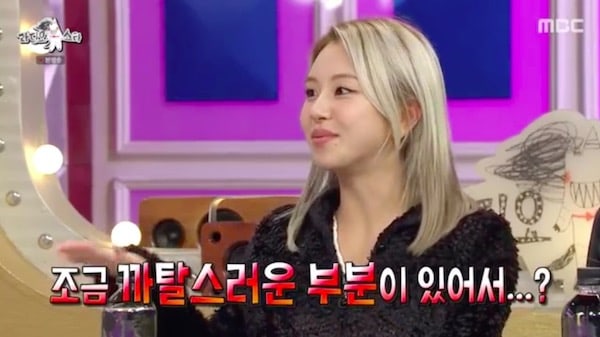 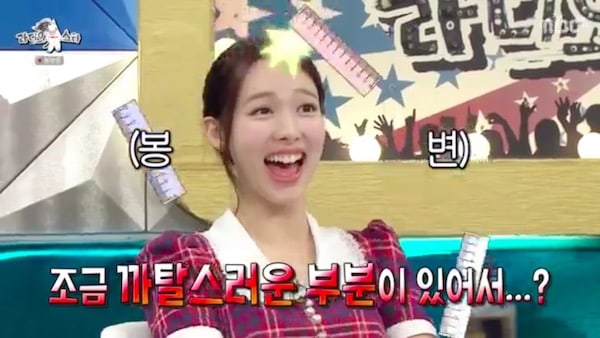 TWICE also put on their first television performance of “I CAN’T STOP ME” during the show!

TWICE
Radio Star
How does this article make you feel?