DAWN Talks About What Jessi’s Like In Real Life, His 1st Impression Of PSY As Head Of P NATION, And More

DAWN spoke about his label mates and more on the November 3 broadcast of the radio show “Muzie and Ahn Young Mi’s 2 O’Clock Date”!

During the show, DJ Muzie asked DAWN if he’s friends with Jessi, who featured on his latest title track “DAWNDIDIDAWN.” They’re also under the same agency, as DAWN and HyunA joined PSY’s label P NATION shortly after Jessi in January 2019.

DAWN replied, “Jessi and HyunA are really close. So I’ve seen her often since I joined the agency. Jessi is exactly the same as she is on television, but she’s also a bit more soft-hearted, childlike, and innocent in real life. She’s very innocent, bright, and cute.”

DAWN also spoke about P NATION’s founder PSY. “When I first saw him, he was totally different from the singer PSY,” DAWN said. “He seemed scary and businesslike, but he was cool.”

He went on to say that when he’s asked others what they think about PSY, they all say that he seems fun and warm. “But when I meet him at the company, he’s different,” said DAWN. “He really seems like the head of an agency.” 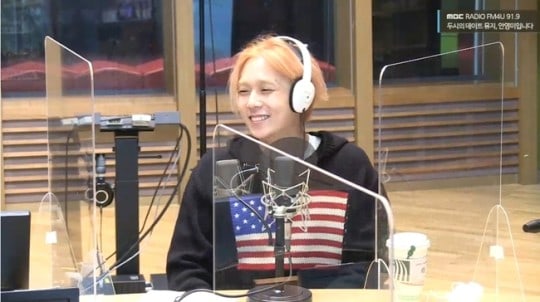 During the show, DAWN also talked about his image. “I have an image that seems listless and impassive, so people frequently misunderstand and think that I wouldn’t work hard,” he said. “But I always try to work hard no matter what I’m doing. People get surprised to see me prepare a lot.”

A listener wrote in later on to say, “I thought DAWN looked like he would lack energy because he’s pale, but I was impressed when I saw him dancing on ‘Radio Star.'”

DAWN replied, “That’s a huge compliment. I’m really grateful. I often hear that I’m different when I’m dancing. When I dance, I don’t think about anything else and just focus on dancing.”