On November 11, Jimin spoke with fans via a live broadcast on BTS’s YouTube channel. He said that the group has been rehearsing for the end of the year and he had just come from choreography practice.

BTS is currently gearing up to release their new album “BE” on November 20, and Jimin said he knew a lot of people are curious about how it’s going. “Almost all of the songs are pretty much ready at this point,” he said. “And the music video was also really fun to shoot.”

The group has taken on the production of their album, participating in not only creating the music but also the concept, design, direction, and more.

“This whole process was so fun,” Jimin said. “It was so fun working on this album with the other members. Coming together like this, talking about the themes, saying ‘I made it like this, what do you think?’ All of that made it fun. I’d show the members and say, ‘I tried writing this song, melody, lyrics. How is it?’ Of course, some things made it in and lots of other things didn’t make it. But it felt great when the members said I did a good job. It was fun to try various different things.”

He went on to say that they’d even had long discussions about which key would be best, and he’d particularly talked about that a lot with V. 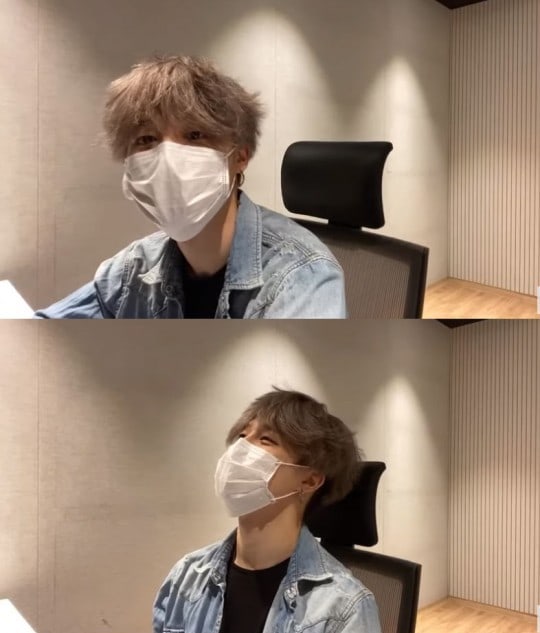 After confirming that the filming for the music video is done now, Jimin tried to think about how much he could tell fans about it. He settled on calling it the “roughest” of all their music videos so far and shared that they’d been happy during filming.

Jimin then said that he knew fans were concerned about Suga, who recently had shoulder surgery. “He’s recovering well, so I hope you’re not worrying too much,” said Jimin. He shared that Suga gives them updates to let them know how he’s doing and they’re all keeping in touch. He added, “The surgery went well.”

“He’s saying that he misses all of you,” said Jimin. “I hope you can wish for his speedy recovery with me too.”

Jimin talked about his role as “project manager” for the album, saying he thought he didn’t do a lot during the process and that his role was mainly to be an intermediary between the agency and members. He would ask the members about their desired themes and styles and how they wanted to structure the songs, and then he’d put that all together to relay to the agency. He then received feedback from the company and shared it with the members, and in addition he’d present all the members’ work to the label.

Jimin also described their new album by saying it’s a record of the emotions they’ve felt and are feeling now.

He went on to assure fans that they’re all taking good care of their health. Jimin added, “Suga decided to get the treatment early before his health got worse, because he wants to be with you for a very long time. If you wait just a little bit, you’ll see him back and healthy soon.”

Jimin continued, “The process of making this album was a very happy period of time for me,” describing it as a chance for him to understand himself and their situations and to think about their fans.

“I hope that it will be a precious album for you too for a long time,” said Jimin. He wrapped up the broadcast by talking about how they miss fans a lot and will keep working hard until the day they can meet fans again in person.

BTS
Suga
Jimin
How does this article make you feel?