Hyelin, Soyul, Raina, And Sera Tearfully Share Stories About Their Families On “Miss Back”

The latest episode of “Miss Back” introduced special cast member EXID’s Hyelin and signaled the start of their second duet mission!

MBN’s “Miss Back” is a mix of a documentary and variety show, and it follows a group of “forgotten” female singers who are hoping for a second chance at success. The cast includes Gayoung from STELLAR, Nada from Wassup, Raina from After School, Sera from 9MUSES, Soyul from Crayon Pop, Subin (Dalsooobin) from Dal Shabet, and Jung Yujin from The Ark. Leading the show is singer Baek Ji Young, who is the singers’ producer and life mentor, and she’s joined by fellow hosts/judges Song Eun Yi and Yoon Il Sang.

On the November 12 broadcast, the cast members were introduced to their second mission song and partnered up for their duet performances. Baek Ji Young also introduced the cast’s special member, EXID’s lead vocalist Hyelin. When asked why she decided to appear on the show, Hyelin shared, “Although EXID hasn’t disbanded, all the members are currently doing individual activities. Compared to when the five of us promoted together, I have more concerns and there are more difficult aspects. I’m appearing so I can grow as singer Hyelin and gain strength.”

EXID skyrocketed to fame in late 2014 with their smash hit “Up and Down.” Hyelin explained, “We were in a situation where we could only release one song so we worked really hard. We tried our best, thinking of it as our last chance. We went all out in our preparations but it still didn’t do well. Then, a fancam went viral and the song blew up.” 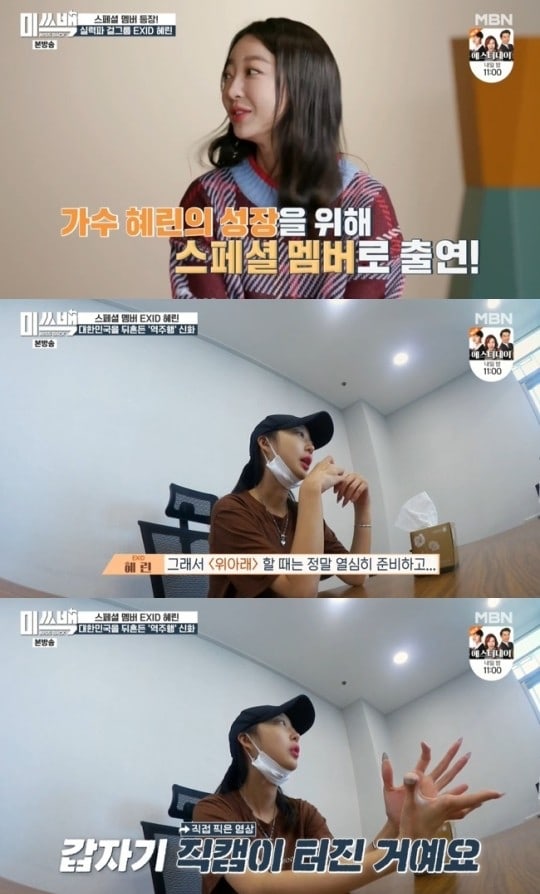 Hyelin parted ways with EXID’s agency after her contract expired in 2020. She expressed her goal to overcome certain fears through this program, explaining, “I’m not good at doing things on my own, especially being on stage. I get really nervous so my members would take turns each filling in for me. The responsibility of having to do everything alone was so burdensome.”

Later, Hyelin invited the EXID members over to her house where she shared these concerns. LE hilariously reassured her by saying, “You can mess up. Do you think we’ve only messed up one or two performances? There are so many performances where I made mistakes that made me want to hide.” After, Hyelin commented, “Thanks to my unnies, I feel in control. Through this program, I want to receive recognition for my singing.” 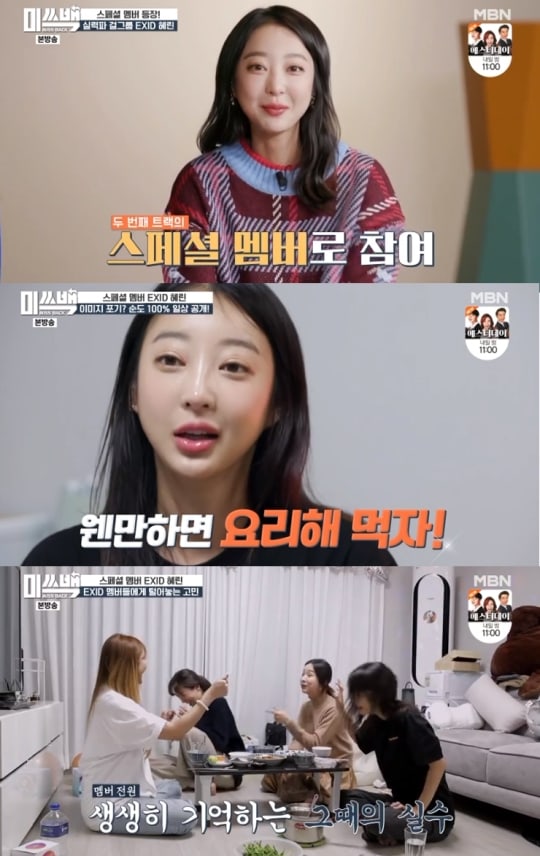 Once all the cast members were together, they listened to their second mission song, a soft, ballad track. In addition to having to sing the song, this mission included writing their own lyrics. To dive deeper into the week’s theme of family, Song Eun Yi brought psychiatrist Oh Eun Young as a guest. She instructed the cast to each draw a photo of what they do with their families and analyzed their pictures.

Looking at Nada’s drawing, Oh Eun Young asked why she was the only one with her back turned. Nada explained, “I did well in school. However, I dropped out and debuted in a girl group then had a hard time due to a lawsuit. It was so hard seeing people hate on my parents.”

Hyelin drew a memory of her family having dinner together after she received her first pay cheque at the age of 20. She shared, “This was the first time my family and I had a real conversation. We’re a household that doesn’t communicate much. We have a lot of memories but we don’t talk much so it’s sad.” 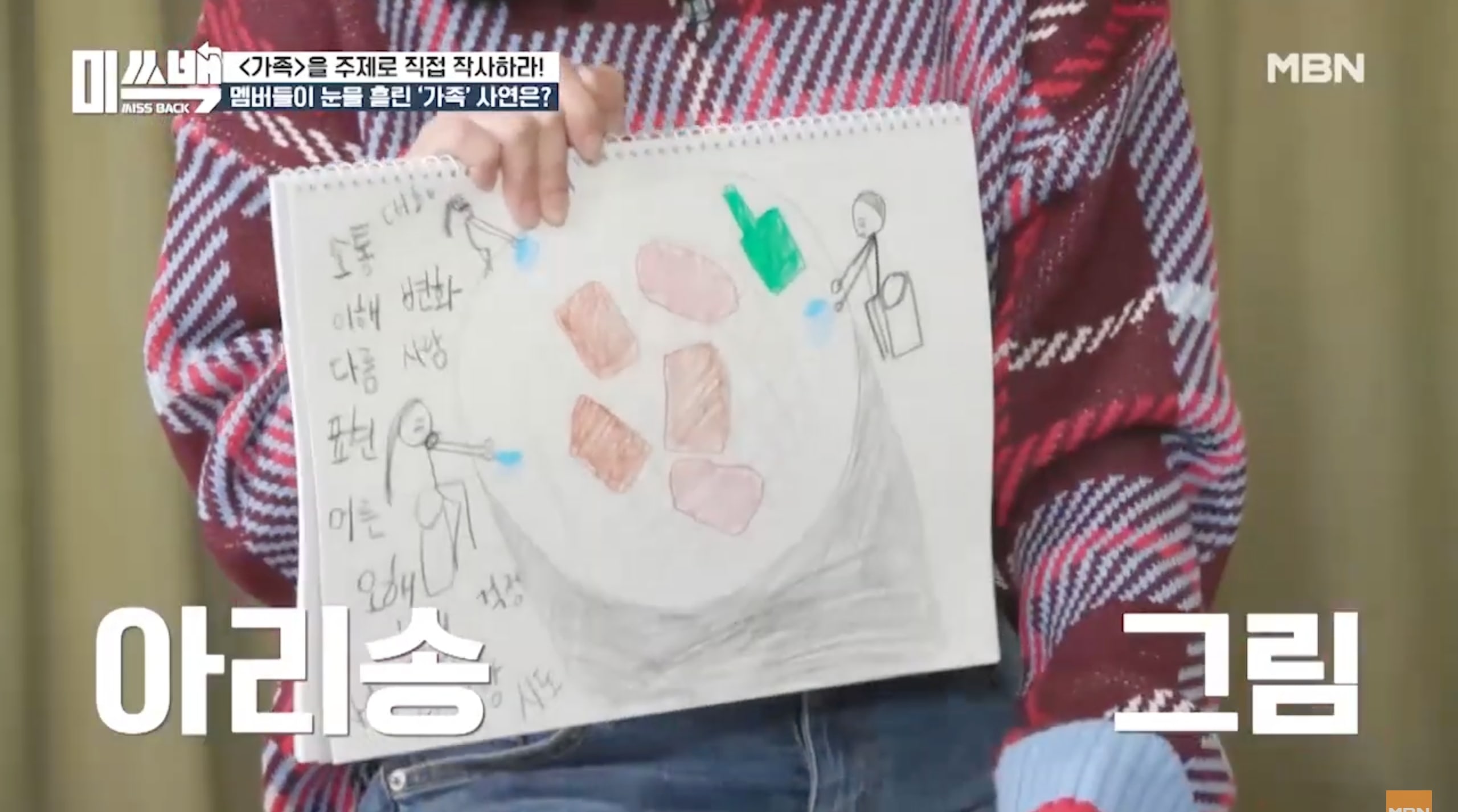 In her analysis, Oh Eun Young explained, “You’re looking at one another but maintaining an emotional distance. The food is bigger than the people. This explains your feelings of wanting to engage in conversation to grow closer but being afraid that you’ll get hurt if you do so without being prepared. It does still reflect that you are trying.” 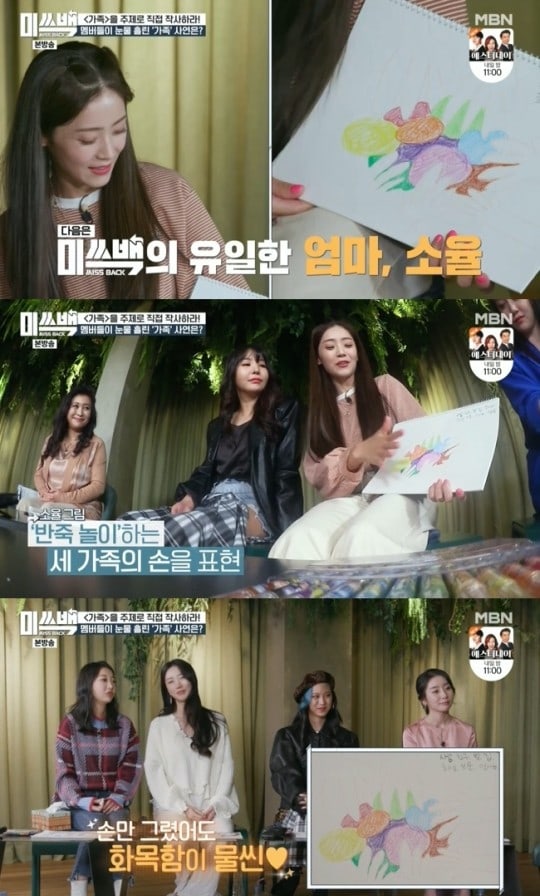 As Soyul began to tear up, Oh Eun Young said, “If you tear up, you just have to cry. It’s possible that someone is so precious you don’t know what to say in case you lose them. This directly reflects your feelings as a mother.” Soyul agreed with this, sharing, “I always tell Heeyul, ‘You are my precious treasure.’ I think I’m crying because she’s so precious to me.” 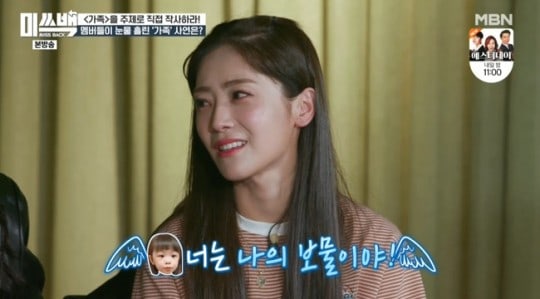 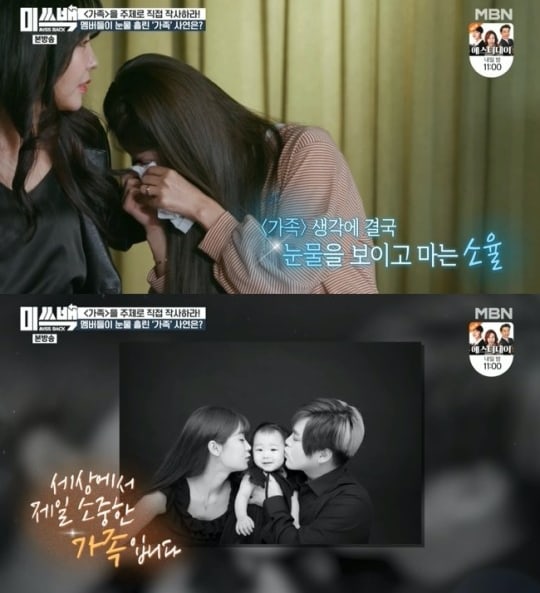 Raina drew a photo of her annual family Christmas dinner, talking about her close relationship with her mom. She then filmed a short video message to her parents, tearfully sharing, “Are you doing well? I know you worry about me, but I hope you worry less. I’m always apologetic because I feel like I haven’t taken care of you well. I liked that I was so independent but I feel sorry when I think about my family because I feel like I selfishly only lived for myself.” Lastly, she added, “My mom’s definitely going to cry watching this. Anyway, I’ll be more attentive. I love you.” 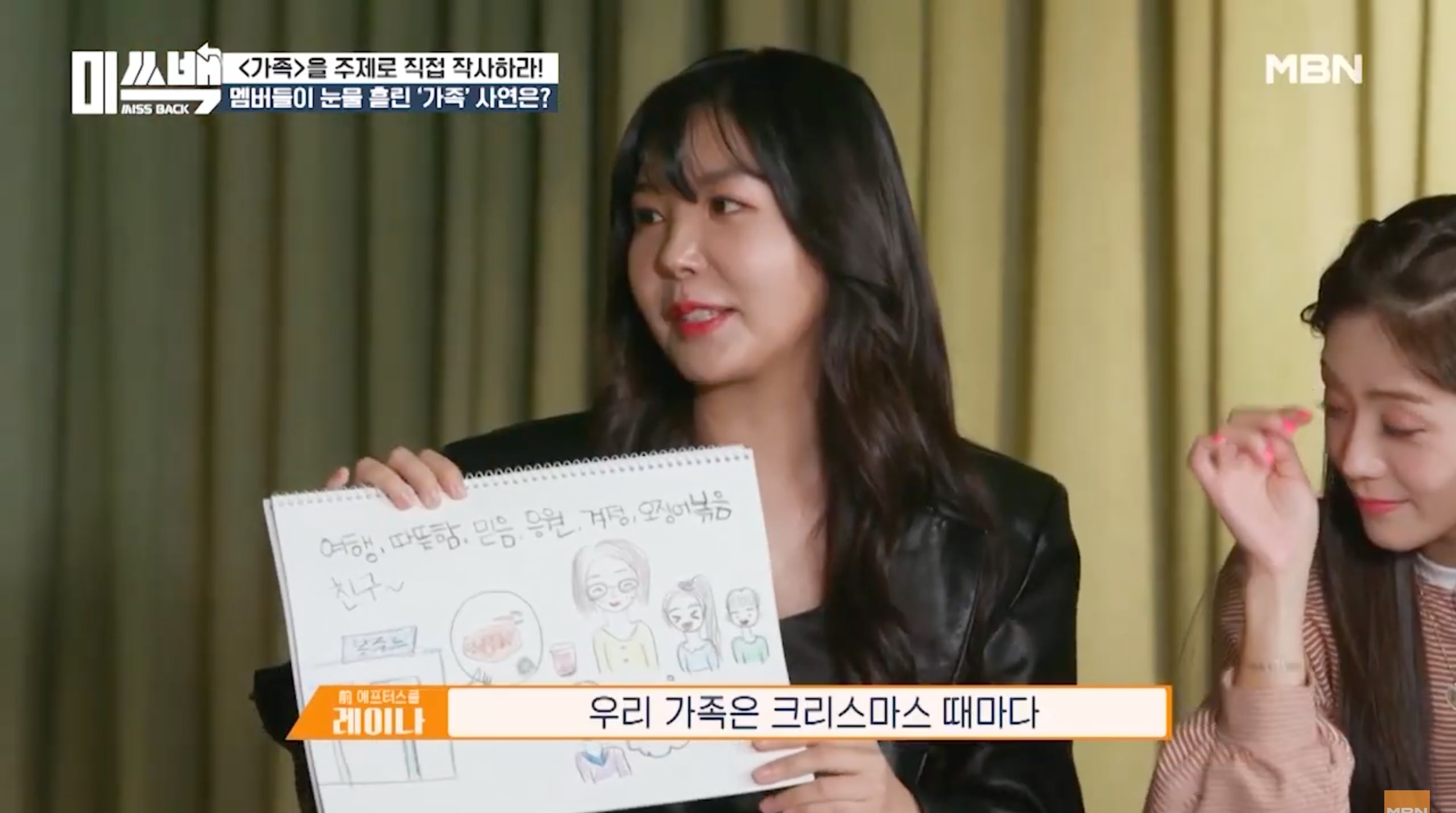 Amid everyone else’s heartfelt family stories, Sera carefully commented, “I can’t relate to feeling this way about your family. When I think of my family, my thoughts are complicated.”

Sera drew three different drawings, with the first containing shapes, the second of a family dinner, and the third of her and her dad at the beach. She explained the last drawing saying, “Once when I was younger, the sand was so hot that I thought I would burn my feet. My dad lift me up and it felt like I was on top of the world. I think that’s the one good memory I have.” She continued, “What should I do, teacher? I just want to rip apart memories regarding my family.” 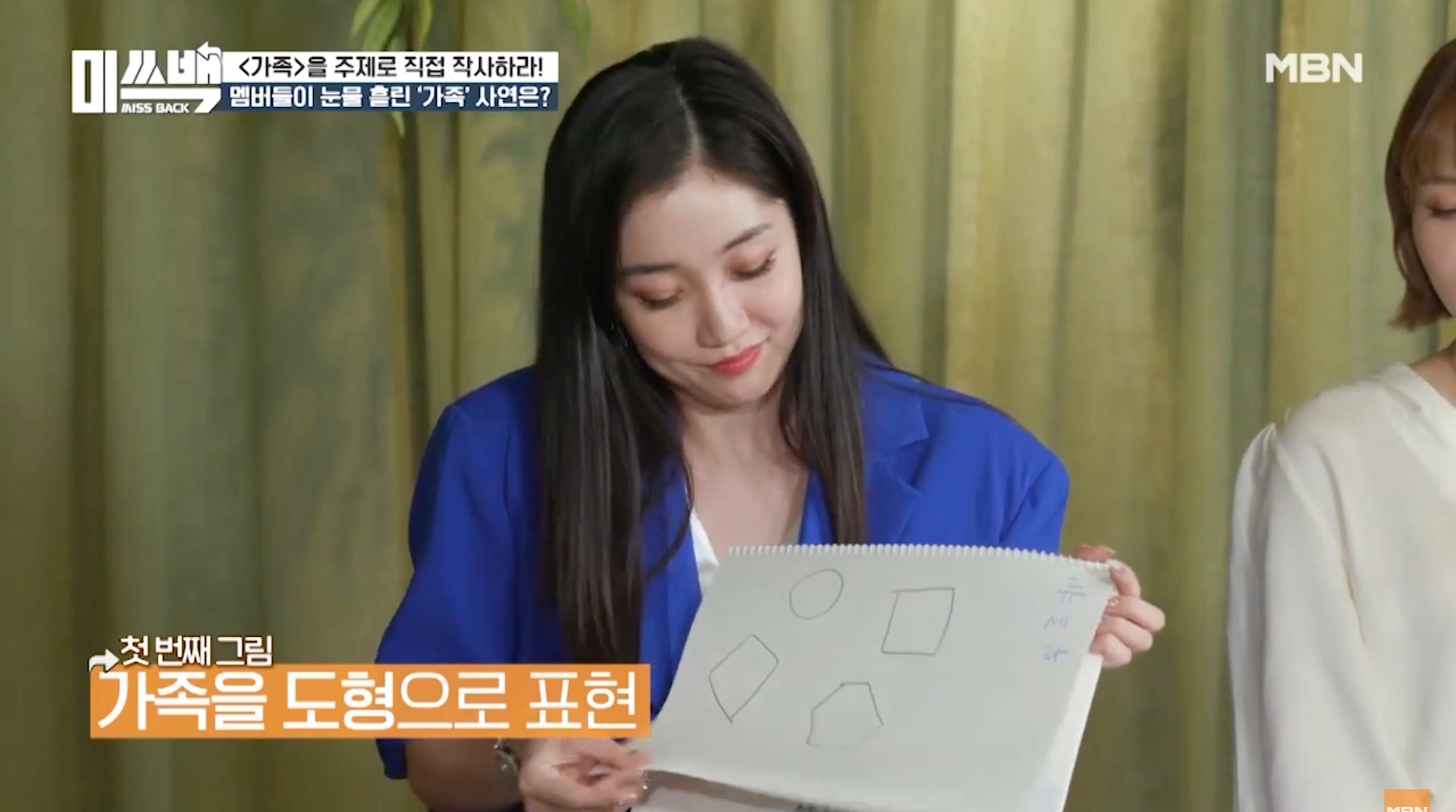 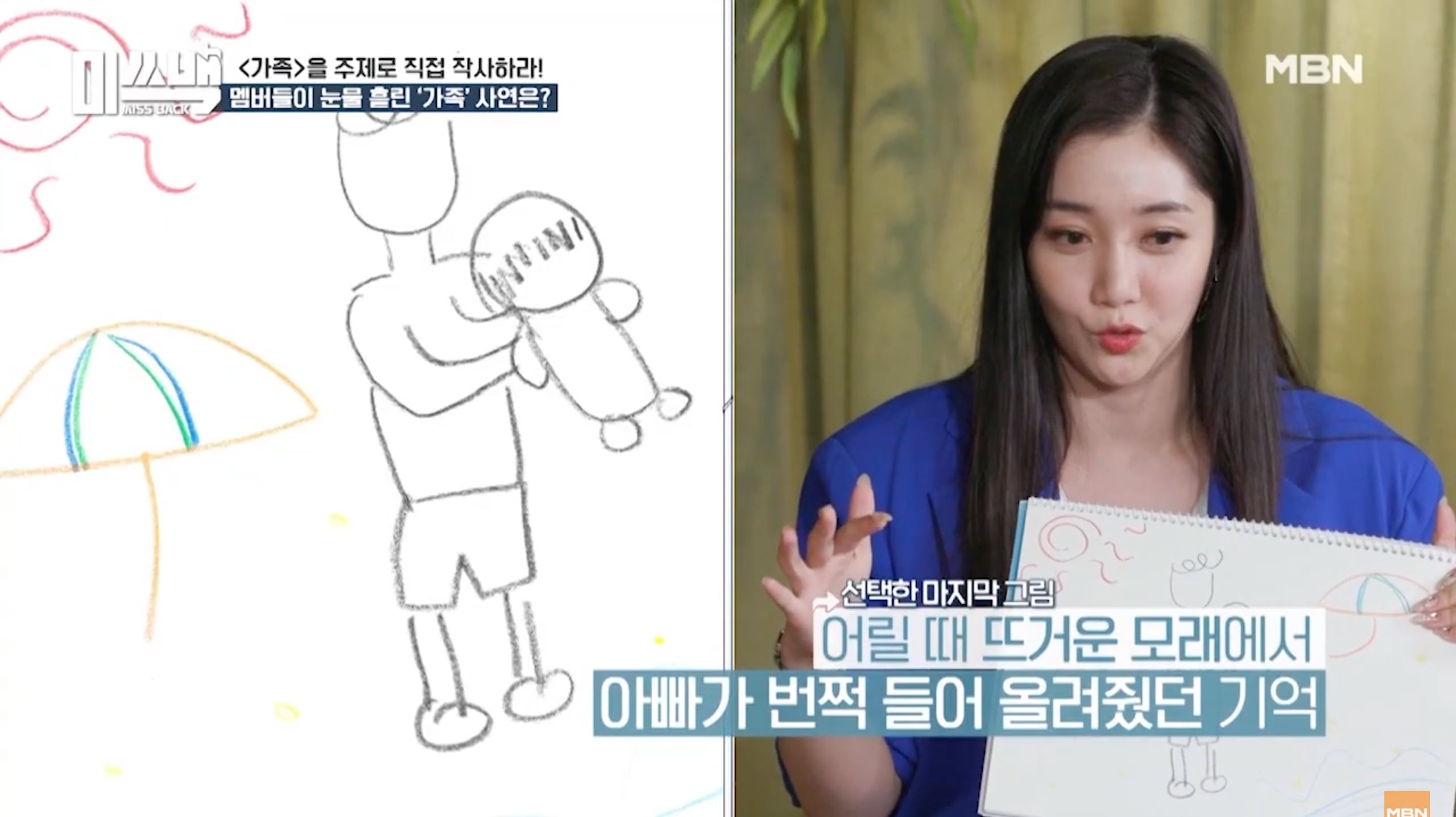 While Sera was a trainee, her parents got a divorce and her family now all live separately. Oh Eun Young circled back to her first drawing of shapes, explaining that it represents how difficult it was for Sera to even picture her family members as real subjects. She added that the way she purposefully dug up her one positive memory of her father explains just how much stability and protection Sera needed while growing up.

Oh Eun Young continued, “The fact that you have this feeling in itself means that you’ve solved half of this difficult problem. The remaining problem is how you move forward with this and heal your scars to overcome it.”

Afterwards, Baek Ji Young and Yoon Il Sang matched up the duet pairings. They decided on teams of Hyelin and Gayoung, Sera and Subin, Yujin and Soyul, and Nada and Raina.

On the day of their second mission, legendary veteran singer Insooni joined the judging panel. Since she also first debuted in a group, Insooni shared with the cast, “After our team disbanded, I remember suddenly having to stand on stage alone. I was afraid and the empty space felt so big to me.” She explained that she wanted to come out on the show to support her junior artists, many of whom are still new to standing on stage by themselves.

The first pair to perform was Yujin and Soyul who titled the song “Dear My Mother.” They received high praise from Insooni who commented, “That performance was like cotton candy.” Watch their performance below!

The duet performances will continue next week on November 19 at 11 p.m. KST.