Ahead of the premiere of tvN’s “True Beauty,” ASTRO’s Cha Eun Woo talked about his character in the upcoming drama and more!

Based on the hit webtoon of the same name, “True Beauty” is a romantic comedy about two people who learn to overcome their insecurities and find confidence after sharing their secrets with one another. Moon Ga Young will star as Lim Ju Gyeong, who zealously uses makeup to hide her bare face and combat her insecurities about her looks.

Cha Eun Woo will star as Lee Su Ho, a popular student who seems to have it all, but is secretly harboring his own emotional wounds. Hwang In Yeop will also star in the drama as Han Seo Jun, an untamable rebel with a surprisingly warm heart.

As for why he decided to appear in the drama adaptation, he shared, “After my first encounter with the webtoon, I had already met with the director and writer when I read the script, so my fondness of the character [of Su Ho] grew [while reading]. I was also really drawn to the fact that it was a fun and bubbly school story.” 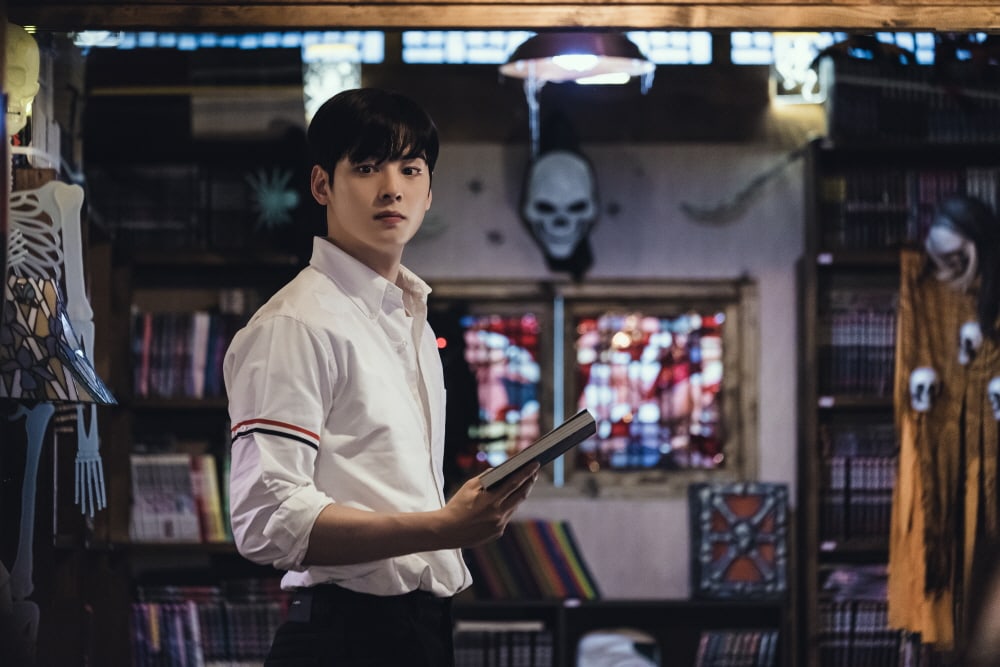 Cha Eun Woo described the character of Lee Su Ho by remarking, “He’s a character who looks cold on the outside, but actually has a warm heart, is occasionally a bit of a klutz, and even has a cute side. He has unexpected charms.”

He added, “He’s a character that has a different kind of backstory from the other characters I’ve played up until now. I think I’ll be able to showcase a new side of myself as a student.”

In order to achieve a more convincing portrayal of Lee Su Ho, Cha Eun Woo is currently going to great lengths to get into the mindset of the character. “In order to understand the character of Su Ho better, I followed the director’s advice to spend my last 30 minutes before going to bed thinking about things that Su Ho has been through,” shared the ASTRO member. “I think about Su Ho’s backstory before going to sleep.”

He continued, “I’m also practicing sports like jujitsu and basketball in order to better portray the character of Su Ho, who loves sports.”

In terms of how similar he is to the character of Lee Su Ho, Cha Eun Woo commented, “Like Su Ho, I have a lot of interest in fashion and I also love sports. But I think we’re different in the way that Su Ho doesn’t hesitate to say cold things and the way he firmly puts up a wall between him and others.” 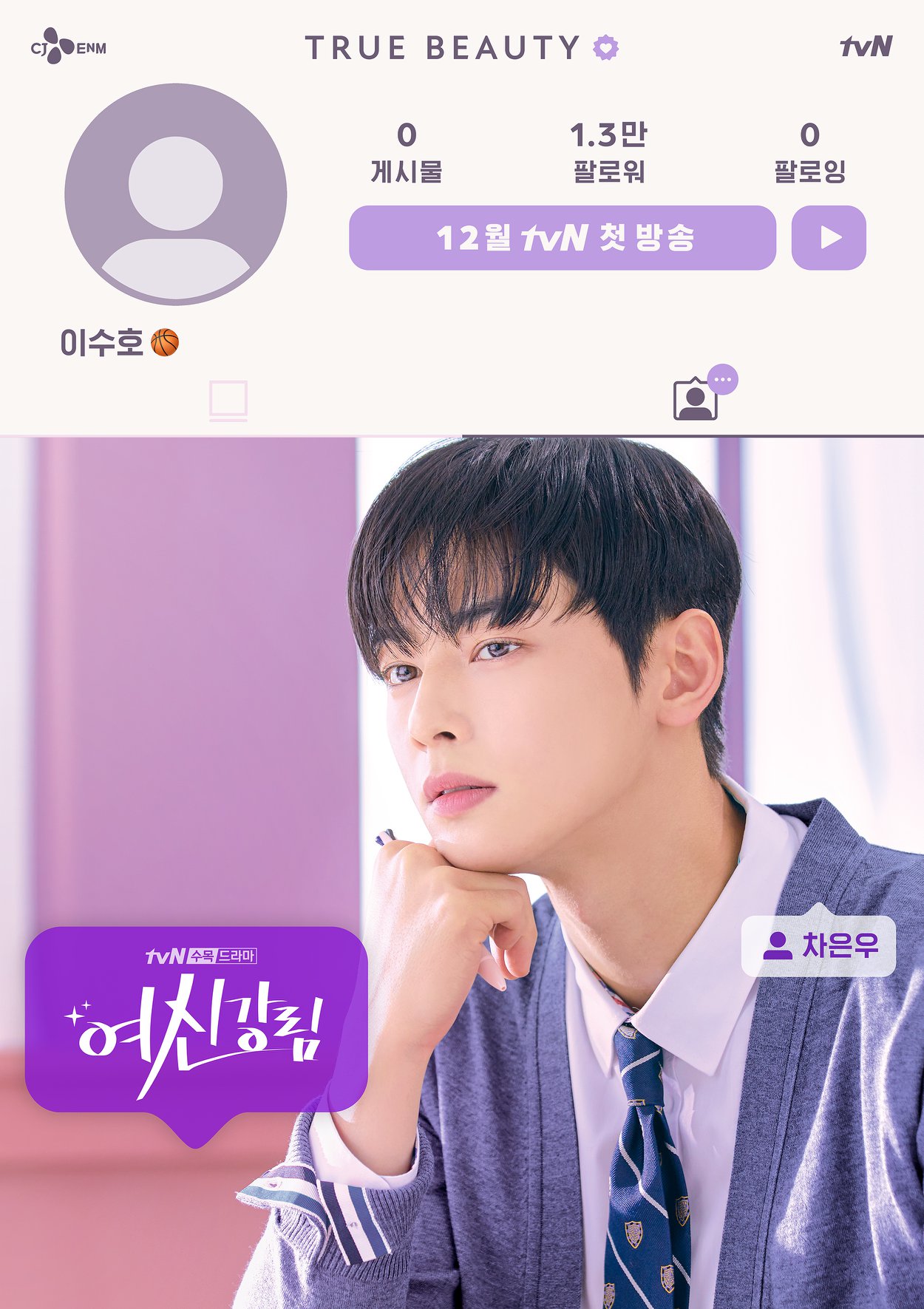 The idol-turned-actor also raved about his experience on set with his co-stars.

“I’m really having so much fun during filming,” said Cha Eun Woo. “Because I became a trainee during my high school days, I don’t have that many memories from high school, but while hanging out with the other actors on the ‘True Beauty’ set, chatting and acting together, I feel like I’ve really become a high school student. The cast and crew are all so sunny and cheerful, and I like them so much that I’m really enjoying filming.”

Cha Eun Woo also spoke highly of his co-star Moon Ga Young, sharing, “My chemistry and teamwork with Ga Young is really great. We talk about scenes and work things out together during rehearsal, and we try out different things [while acting together]. We’re having fun filming.”

“In particular, there are a lot of scenes that the three of us film together—me, Ga Young, and In Yeop—and I think that when the three of us come together, we have really great synergy,” he said.

When asked to grade his own chemistry with Moon Ga Young and Hwang In Yeop, Cha Eun Woo gave himself a 99. “Since we still have more scenes left to film, I left one point so that we can fill up that last point while filming the scenes we have left,” he explained. “Let’s keep going until we reach 100!”

As for which scenes were the most fun to film, Cha Eun Woo revealed, “I especially had fun filming all of Ju Gyeong and Su Ho’s scenes together at the comic book store. The two characters gradually take off their masks around one another in this mysterious space, and there’s a subtle tension in the story that the two create together there, which I think was fun.” 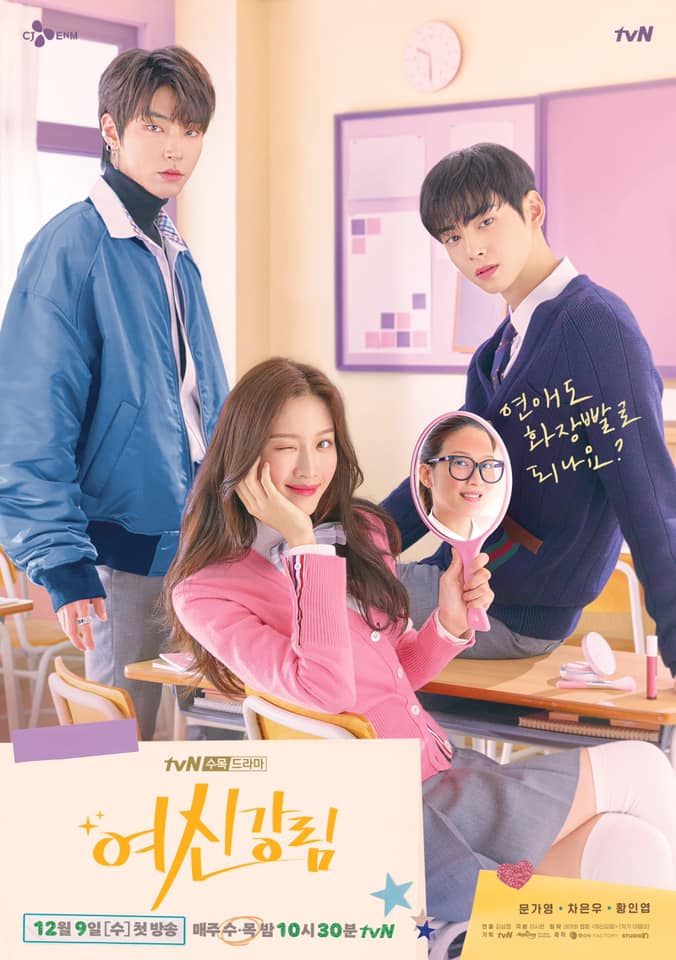 Finally, Cha Eun Woo remarked, “‘True Beauty’ will be premiering soon. Considering how hard we’re working and how much fun we’re having during filming, I hope that the drama can deliver bubbly fun and laughter to its viewers.”

“I will work hard to try to show you good things and a new side of myself as Lee Su Ho, so please look forward to it,” he continued. “Let’s spend this winter and the end of the year together!”

“True Beauty” premieres on December 9 at 10:30 p.m. KST and will be available with subtitles on Viki.