Based on the hit webtoon of the same name, “True Beauty” is a romantic comedy about a girl named Lim Ju Gyeong (Moon Ga Young) who zealously uses makeup to hide her bare face and combat her insecurities about her looks. ASTRO’s Cha Eun Woo will star in the drama as Lee Su Ho, a popular student who has his own emotional wounds, while Hwang In Yeop will play Han Seo Jun, an untamable rebel with a surprisingly warm heart. 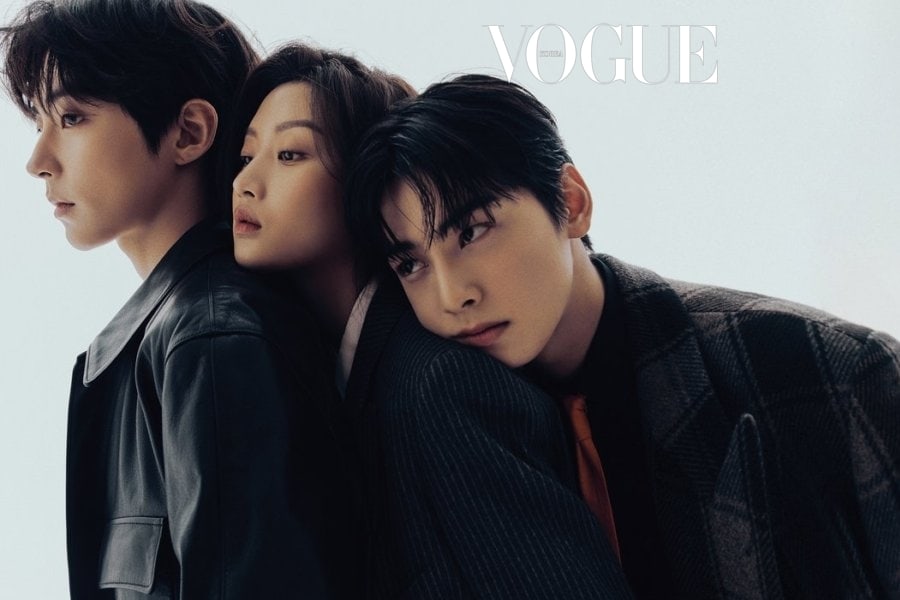 In an interview to accompany their pictorial, the actors discussed their characters and thoughts on the upcoming drama.

On transforming into Lim Ju Gyeong, Moon Ga Young commented, “It took me a long time to understand her character, but there are a lot of ways to understand Ju Gyeong in the drama, like the reason why she is so desperate for makeup. It’s up to me to portray that completely.”

The actress talked about the drama’s subject matter, describing it as a sensitive topic. “But that’s why I wanted to take on the role of Lim Ju Gyeong,” she said. “This could be me being overly confident, but I thought that I’d be able to show viewers the message that I want to show by portraying Ju Gyeong. I know very well that many people are concerned about the subject matter, and it can be uncomfortable in the beginning because everyone has a different point of view. However, this drama is a reality for young people these days in some ways.” 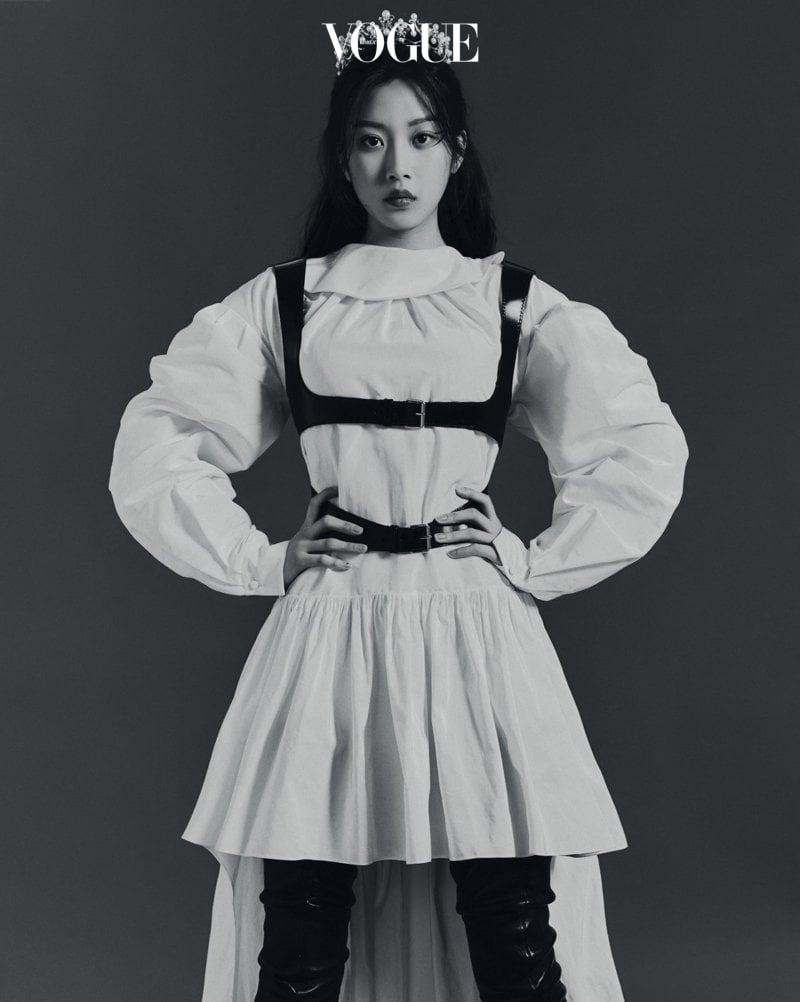 She continued, “We focused on Ju Gyeong’s growth as a person in the drama. I want to show viewers her process of meeting different people and creating a sense of self after becoming more aware of who she is. If viewers are able to think twice about these things as they watch Ju Gyeong, I’m sure that this drama will have done a good job.”

Moon Ga Young explained why she loves her job. “In acting, there’s no right answer,” she said. “The reason why I love books and dislike math is because math gives you an answer. With acting, my performance one day can be different from my performance the next day, and I have to keep thinking about it.”

The actress shared her thoughts on the idea of “true beauty.” She said, “Everyone says to love yourself. It’s cliché but true. It took me a long time to start loving myself. When one is able to do that, they can protect themselves from the judgment and words of other people.” 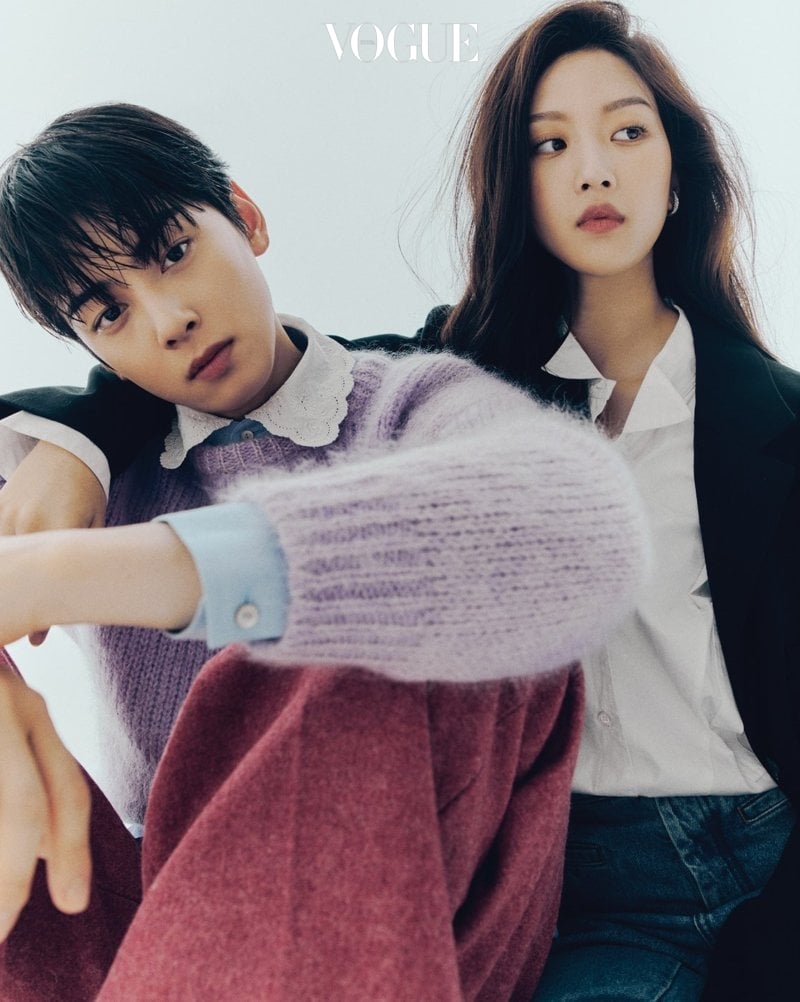 Next, Cha Eun Woo talked about his fellow ASTRO members Sanha and Moonbin being fans of webtoons and noticing that Cha Eun Woo would be perfect to play Lee Su Ho. “A few weeks later, I got an offer,” he said. “I thought and talked about it a lot before taking on the drama, but it’s true that it all started from my members talking about it.”

Cha Eun Woo mentioned his previous role as Do Kyung Suk in “My ID Is Gangnam Beauty,” explaining how Do Kyung Suk and Lee Su Ho in “True Beauty” can seem similar. “The two are alike in that both of them are cold and reserved, but if you look closer, their stories are different,” he said. “I spoke with the director and writer about these concerns a lot.”

Cha Eun Woo continued, “The director advised me to think about Su Ho’s backstory for 30 minutes before I fall asleep, and that was really helpful. We also focused on differentiating Kyung Suk and Su Ho through their outer appearances. I even learned jujutsu, and I’m preparing to become Su Ho the best I can.” 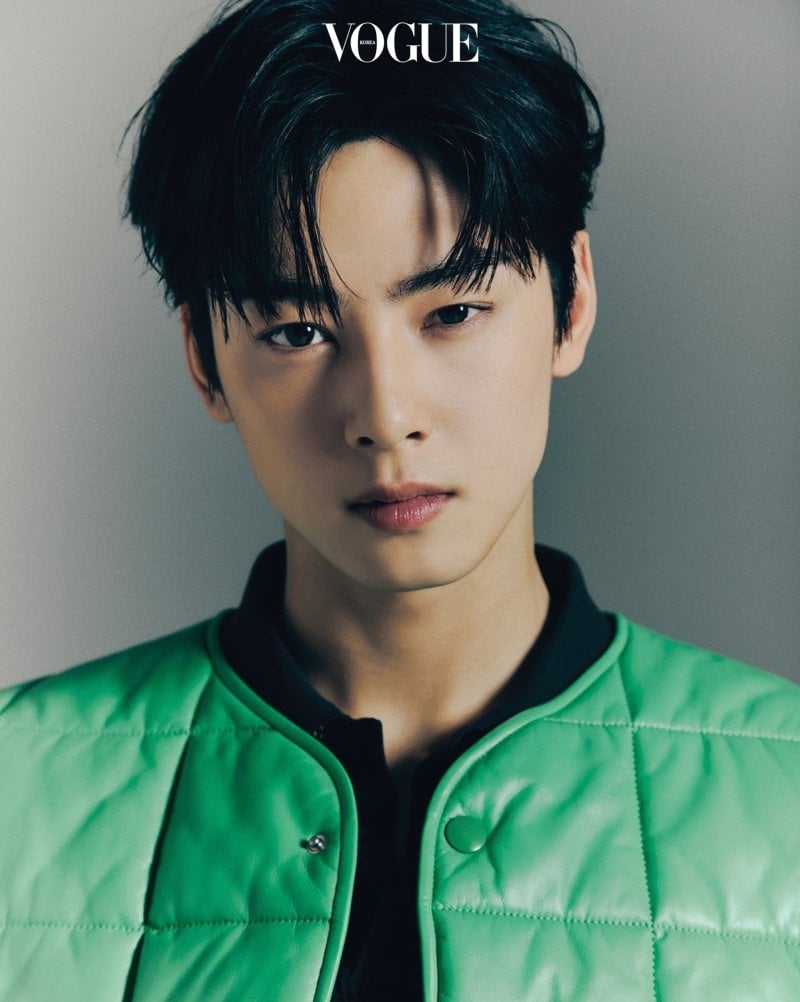 He also commented on portraying Lee Su Ho. “I wonder if it would even be possible to become Lee Su Ho by leaving out Cha Eun Woo,” he said. “The same goes for substituting Su Ho with Cha Eun Woo. I think if I’m able to blend them together well, the viewers will be able to enjoy watching me without it feeling strange.”

With a smile, he added, “Although I put it that way, I want to try a lot of other roles. There are a lot of people inside me that others don’t know about. I don’t know what kind of villain it’ll be, but I have an evil side to me for sure.” 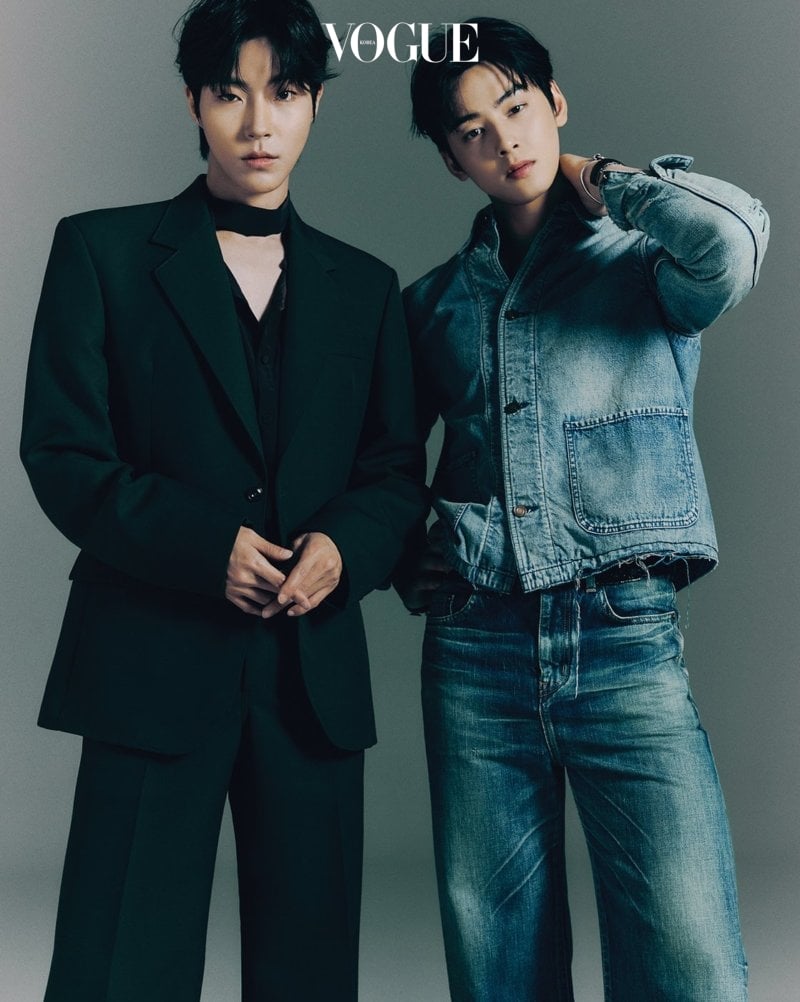 Hwang In Yeop talked about his character as well. “Han Seo Jun is someone who seems cold and rebellious at times, but visually, he’s very pretty and beautiful,” he said. “However, he’s very warmhearted and considerate.”

Hwang In Yeop continued, “Every character has their own various charms. I’ve always wanted to try a character like Seo Jun. I really like him.”

He also shared that his dreams when he was younger was to work as a model and actor at the same time. “I went to see movies with my parents a lot, but I’m very introverted, so I needed a lot of courage just to try out the idea of becoming a model. As I modeled, I gained confidence, and I chased my dream of becoming an actor,” he said. 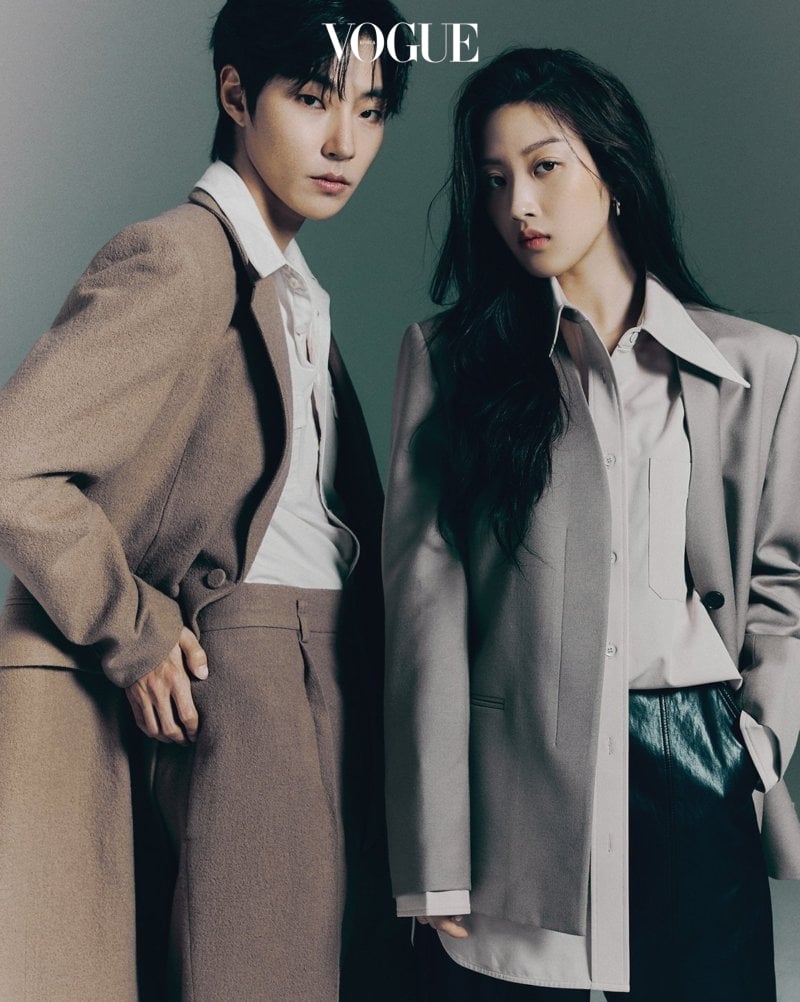 Hwang In Yeop recently played a high school student in the drama “18 Again.” He talked about how his experience with the JTBC drama helped him to take on “True Beauty.”

“I was so thankful to play a role where I could wear a uniform,” he said with a laugh. “There were a lot of younger actors in ’18 Again,’ and there’s a sense of ordinariness. They were truly happy even because of the smallest things, and they were people who were very happy in the moment. I was definitely happy as well, but they were a good influence on me. Because I worked on ’18 Again,’ I felt a lot less pressure thinking about how to take on ‘True Beauty.'”

As a final thought, Hwang In Yeop talked about his future goals. “I want to become an actor that people will be curious about and look forward to.” 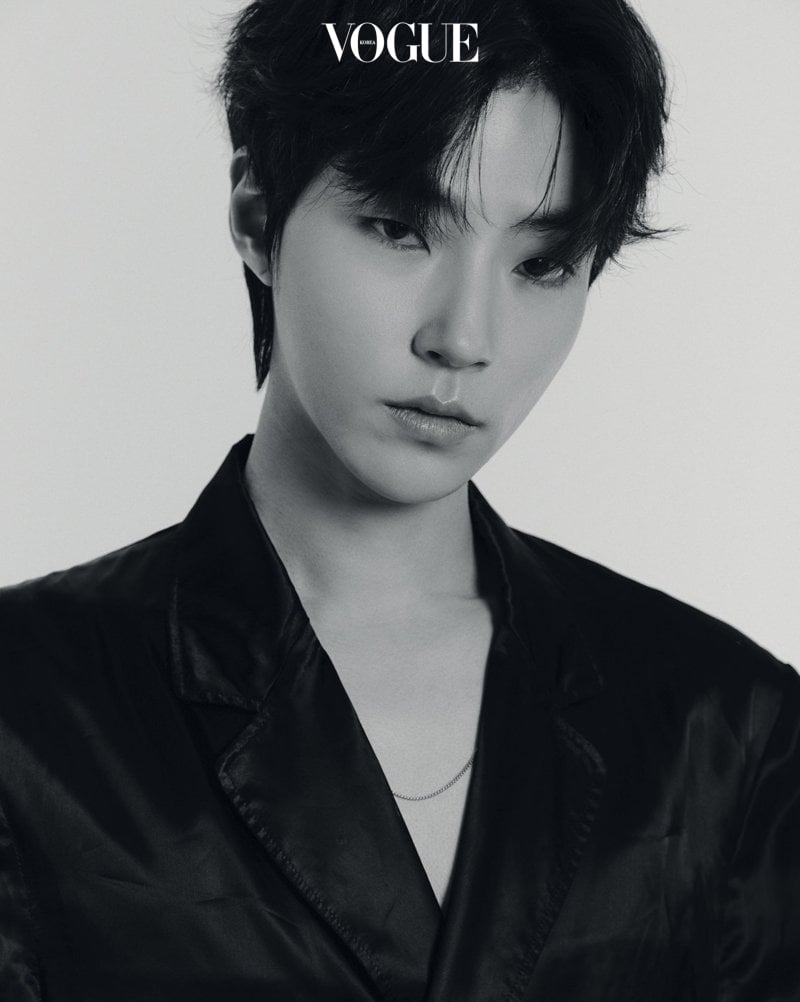 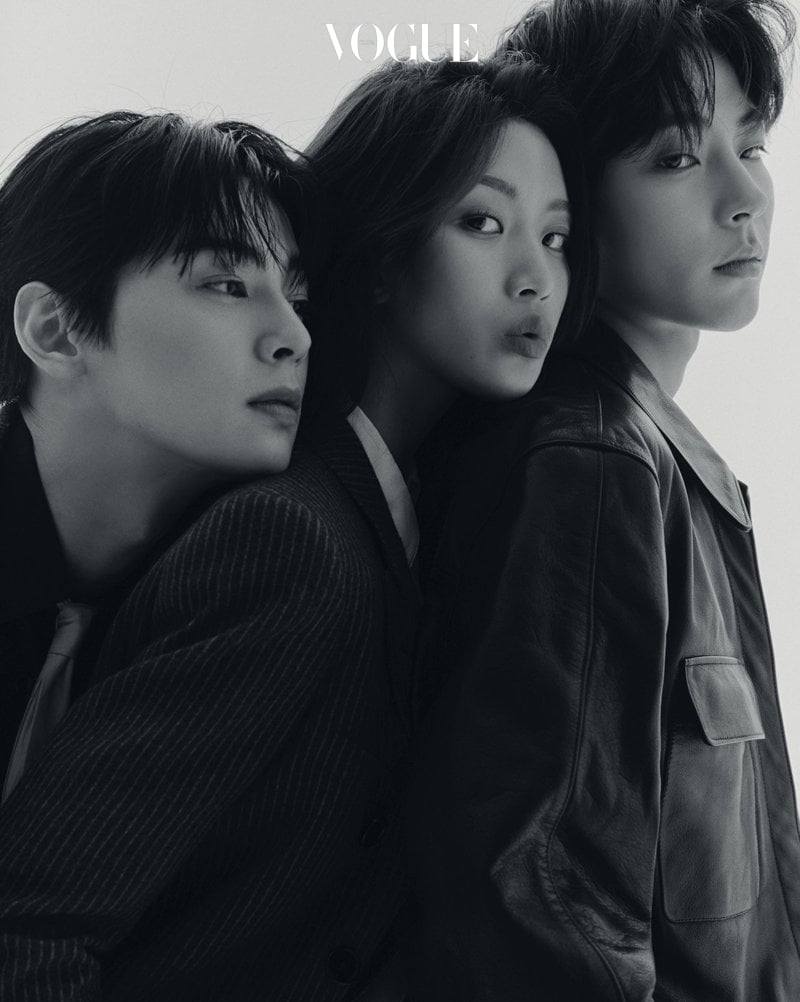 Check out a teaser for “True Beauty” below!