On the November 28 episode of the music talk show, the legendary singer appeared as a guest for the first time in a year—marking her first television appearance since giving birth to her first child this past August.

Host Yoo Hee Yeol enthusiastically expressed his excitement at having Gummy on the show again, and as the two singers greeted each other by playfully pressing their hands against the plexiglass divider separating them, he joked, “I feel like we’re lovers meeting again after being separated by a war or something.”

Gummy then mentioned that she’d watched “Yoo Hee Yeol’s Sketchbook” while resting at a postpartum care center after giving birth. “I turned on the TV, and it was your show, and you were saying it was the OST special,” she recalled. “I was happy to see [Baek Ji Young and Lyn] on the show, because we’re all close, and then you mentioned me at that exact moment.” 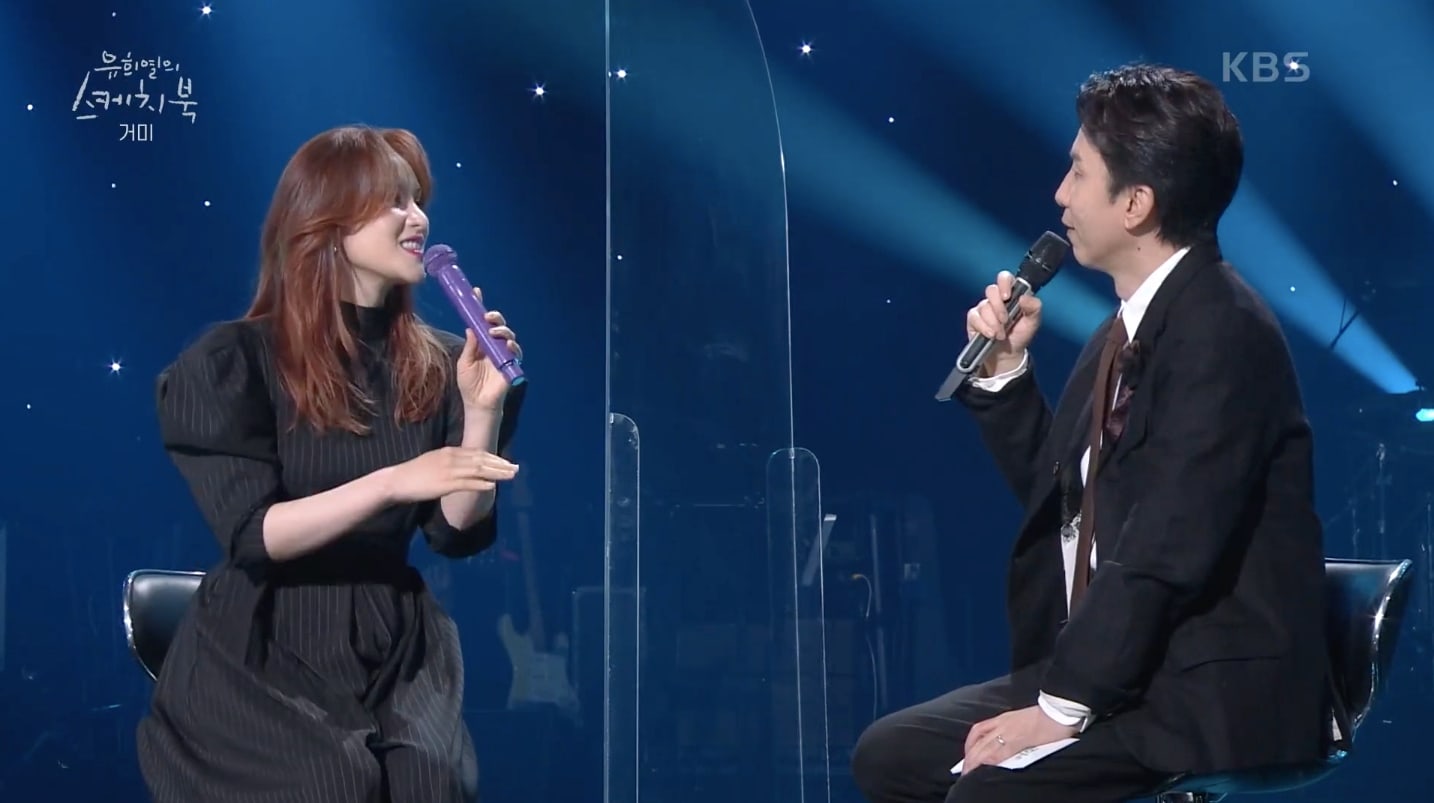 Yoo Hee Yeol went on to remark that because he’d seen Gummy since she was so young, it was hard for him to process that she was already a mother. Gummy responded, “It’s strange, right? To be honest, I still can’t believe it myself. Even when I’m looking at my baby, I find myself wondering, ‘Am I really the one who gave birth to her?’ It’s truly amazing, and every day is full of emotional and touching moments.”

When Yoo Hee Yeol brought up the fact that it was her first television appearance since becoming a mother, Gummy replied, “Yes, and I don’t have any other plans to return to TV for the time being.”

She also shared her thoughts on singing “Remember Me,” her hit ballad from the OST of tvN’s “Hotel Del Luna,” for the first time on TV. “I was so nervous,” she confessed. “And not only was it my first time singing the song on TV, but it was also my first performance in a really long time. So I practiced a lot before coming here today.”

Later, Gummy playfully commented on the massive success of her husband Jo Jung Suk’s own OST contribution—his smash hit remake of Cool’s “Aloha” for his drama “Hospital Playlist,” which topped the Korean music charts for an impressively long run earlier this year.

“He really swept the charts,” Gummy said with a laugh. “It’s to the extent where last year, I received quite a few OST awards, and I think my husband might be the one receiving those awards this year.”

Gummy went on to jokingly complain, “It’s even gotten to the point where recently, people have contacting my agency to try and hire him to perform at events. I’ve even jokingly told him at times, ‘Why did you cross over into my territory and take all my work?’ Performing at events, OSTs… what’s left for me to do?”

Yoo Hee Yeol then teased Gummy by turning to the camera and eagerly inviting Jo Jung Suk to appear as a guest on the show.

After all the joking around, Gummy proceeded to bless viewers’ ears with her own rendition of “Aloha”—featuring some help from Yoo Hee Yeol. When he praised her singing, she humbly responded by hyping up her husband, saying, “The original singer sang the song too well [for me to live up to].”

Check out the clip of Gummy performing “Aloha” with Yoo Hee Yeol below!