tvN’s “True Beauty” shared a behind-the-scenes look at the second episode of the drama!

Based on a hit webtoon, “True Beauty” is a romantic comedy about Lim Ju Gyeong (Moon Ga Young), who zealously uses makeup to hide her bare face and combat her insecurities about her looks. After she meets Lee Su Ho (Chan Eun Woo), a popular student who has his own emotional wounds, they share each other’s secrets and learn to heal through love.

The video begins with Moon Ga Young applying makeup on just half of her face, which makes the staff laugh as they comment, “You look scary.” Moon Ga Young smiles at the camera as she shows off her half face of makeup and asks which side looks better. After filming a scene with Kim Min Ki, who plays Lim Ju Gyeong’s younger brother Lim Ju Young, she asks him which side he likes better. He replies, “The right side,” which is the side with no makeup, so she playfully hits his arm in retaliation.

In the next clip, Cha Eun Woo and Jung Joon Ho, who plays Lee Su Ho’s father Lee Joo Heon, rehearse for their scene inside a jiu-jitsu academy. While waiting to film, Cha Eun Woo shows off his purple belt. Although he says he doesn’t know why his belt is purple, he then wonders if it was selected on purpose because purple is the color of ASTRO’s fan club AROHA. The pair of actors pour all their energy into filming as they tussle on the mat to complete a perfectly choreographed scene. Afterwards, Cha Eun Woo slouches on the mat as he says with a tired smile, “For the sake of an awesome scene.” 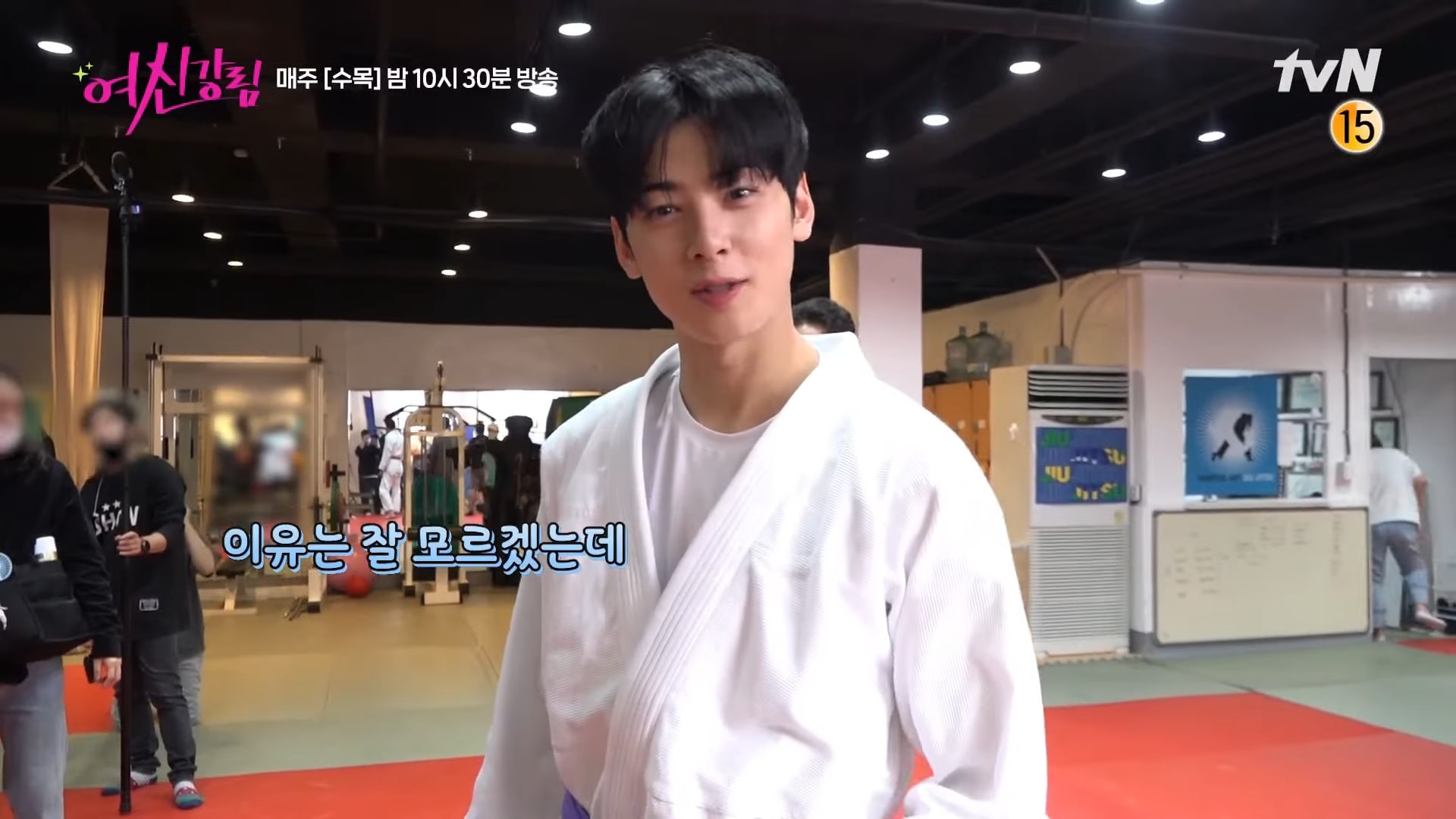 The video then cuts back to Moon Ga Young as she shares a laugh together with Kang Min Ah and Park Yoo Na, who play Lim Ju Gyeong’s friends Choi Soo Ah and Kang Su Jin. After she films a close-up take for the scene where Lim Ju Gyeong gets hit by a flying cake, Kang Min Ah reports that Park Yoo Na had an unenthusiastic reaction. Moon Ga Young turns to Park Yoo Na and tells her, “Let’s try harder,” to which Park Yoo Na says jokingly, “It’s just Su Jin’s personality!”

Moon Ga Young then gets cream that looks like cake icing applied to her face and films a scene where she tries to hide her real face by keeping her classmates away. After the director says, “Okay,” Moon Ga Young can’t hide her laughter at Kang Min Ah’s panicked scream.

Next, Moon Ga Young rushes through the hallway to film a scene where she steps on the back of Hwang In Yeop, who plays the school rebel Han Seo Jun. Afterwards, Kang Min Ah and Park Yoo Na smile for the camera as Hwang In Yeop jokes around behind them.

Cha Eun Woo and Moon Ga Young get together to rehearse for the scene in which Lee Su Ho covers Lim Ju Gyeong’s face with his jacket. As they prepare to film, Moon Ga Young tells Cha Eun Woo about getting hit by the cake, and he listens to her intently. She also swipes some cream off her face and tries to put it on the back of his hand, but he avoids it and asks, “Is it a makeup product? You want to test it out?” Eventually, Moon Ga Young succeeds, and Cha Eun Woo looks at the cream on his hand in defeat. 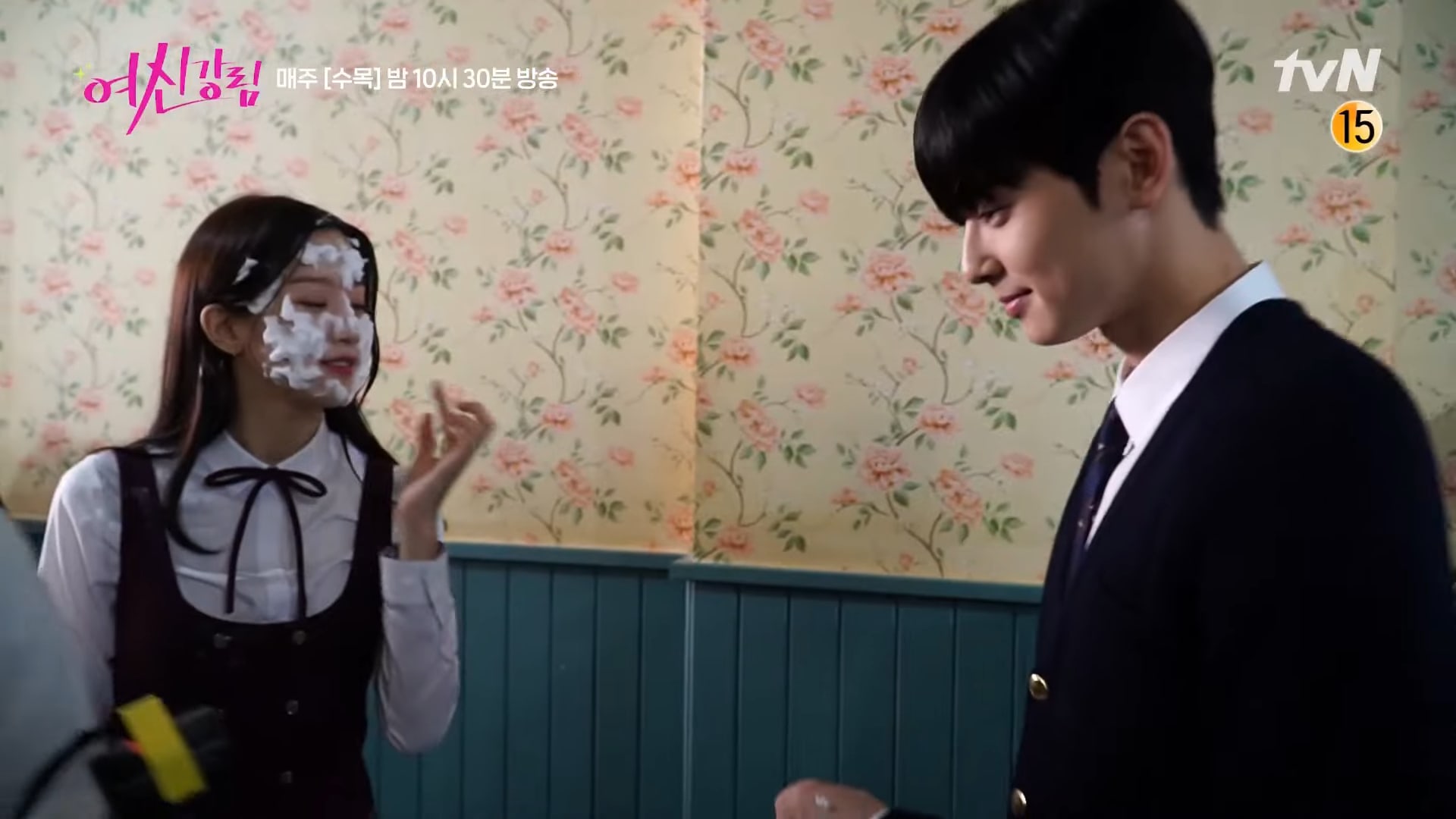 Finally, smoke is added to give some dramatic effect to the scene, but the two actors end up having to film another take since too much smoke blew past the camera. After one more take, the pair complete the scene without a hitch.

Watch the drama with English subtitles on Viki below: