“The Penthouse” Rated Most Buzzworthy Drama + Park Eun Suk Rises To No. 1 In Actor Rankings

SBS’s “The Penthouse” continues its winning streak at No. 1 on the list of most buzzworthy dramas!

For the third week in a row, the hit drama has managed to top Good Data Corporation’s weekly list of the dramas that generated the most buzz. The company determines each week’s rankings by collecting data from news articles, blog posts, online communities, videos, and social media about currently-airing and upcoming dramas.

“The Penthouse” remained No. 1 for the week of December 7 to December 13, with tvN’s “True Beauty” rising to No. 2. OCN’s “The Uncanny Counter” and tvN’s “Mr. Queen” followed close behind at third and fourth places respectively.

The stars of “The Penthouse” also dominated this week’s rankings of the most buzzworthy drama cast members, sweeping the top two spots on the list and claiming five spots out of the top 10. Park Eun Suk shot up the list to claim No. 1, followed by his co-star Lee Ji Ah at No. 2. Meanwhile, Kim So Yeon came in at No. 7, S.E.S.’s Eugene at No. 8, and Uhm Ki Joon at No. 9.

The cast of “True Beauty” also made a strong showing on this week’s list, with star Moon Ga Young at No. 3 and ASTRO’s Cha Eun Woo at No. 5. Shin Hye Sun, the leading lady of “Mr. Queen,” claimed No. 4 in the actor rankings, while her co-star Kim Jung Hyun came in at No. 10. Finally, Jo Byeong Gyu of “The Uncanny Counter” rose to No. 6 for the week.

The top 10 dramas that generated the most buzz in the second week of December are as follows: 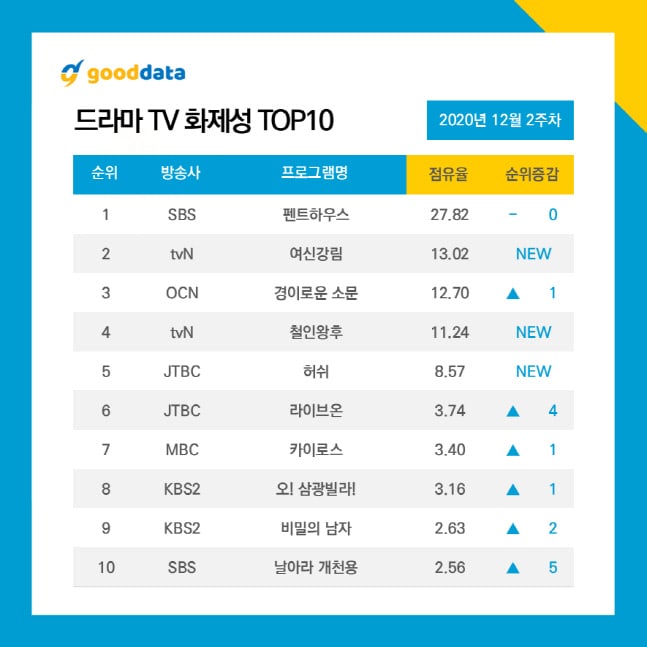 Meanwhile, the top 10 drama actors that generated the most buzz in the second week of December are as follows: 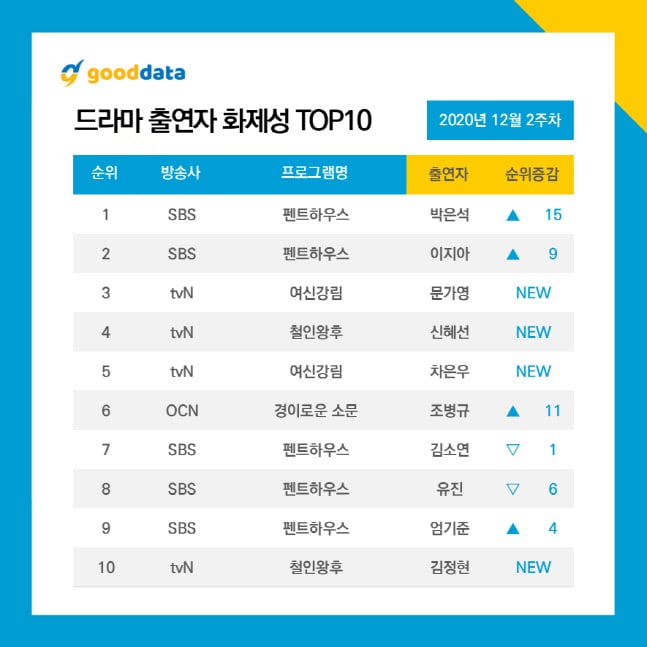