On the January 3 episode of SBS’s “Running Man,” Kim Jong Kook and HaHa talked about their wins at the 2020 SBS Entertainment Awards.

Kim Jong Kook took home his first Daesang (Grand Prize) at an Entertainment Awards for his work on “Running Man” and “My Ugly Duckling.” HaHa took home the Top Excellence Award in Show/Variety, and “Running Man” as a show won the Golden Content Award. 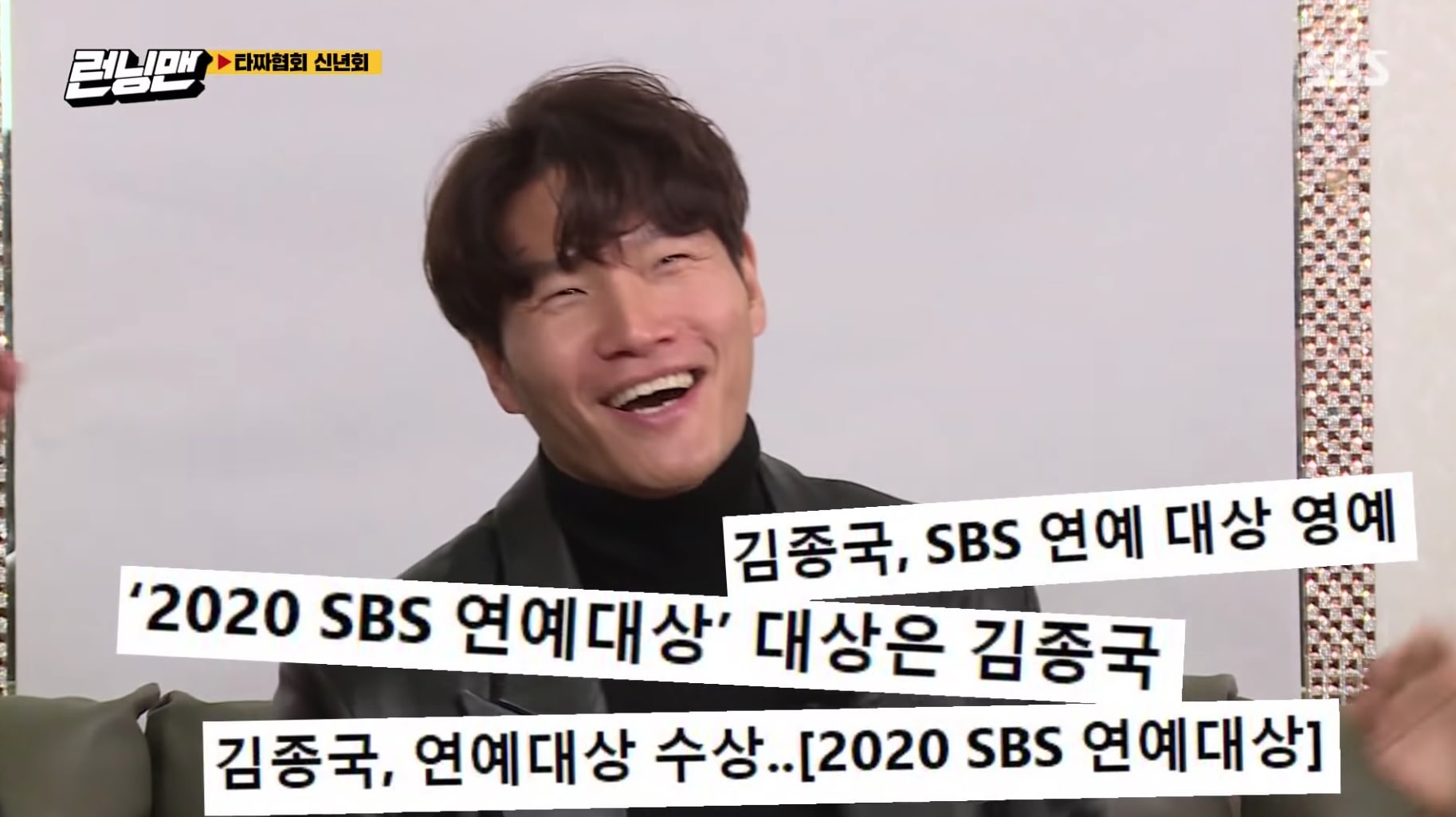 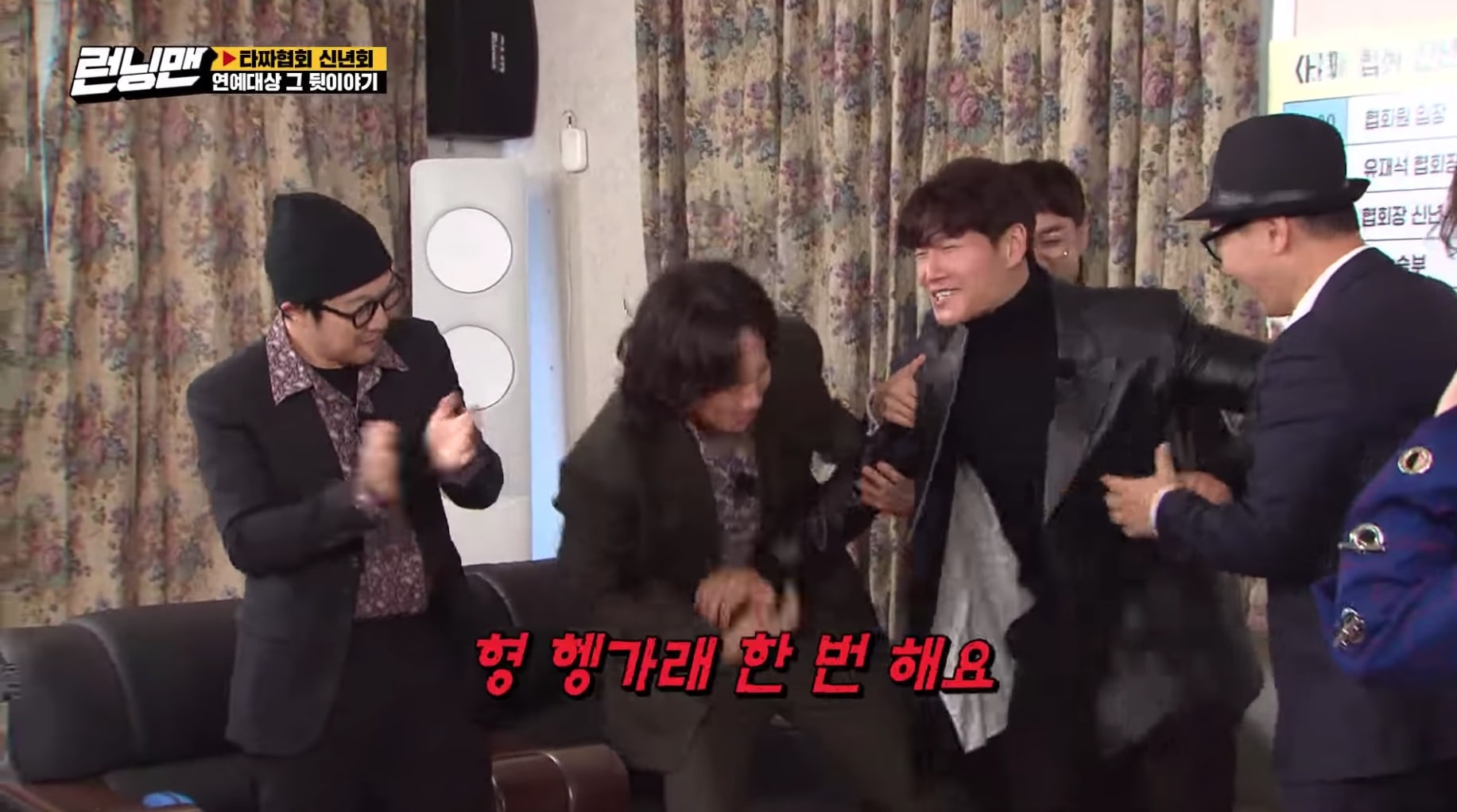 In the “Running Man” episode, Ji Suk Jin brought up the Daesang when he told Kim Jong Kook, “Your face has gotten brighter since you won.” The members congratulated him again and tried to toss him into the air, but embarrassed, he blocked them with his superior strength. Ji Suk Jin commented, “Even the six of us can’t toss him in the air?” and Lee Kwang Soo added, “We can’t even congratulate him the way we want.” 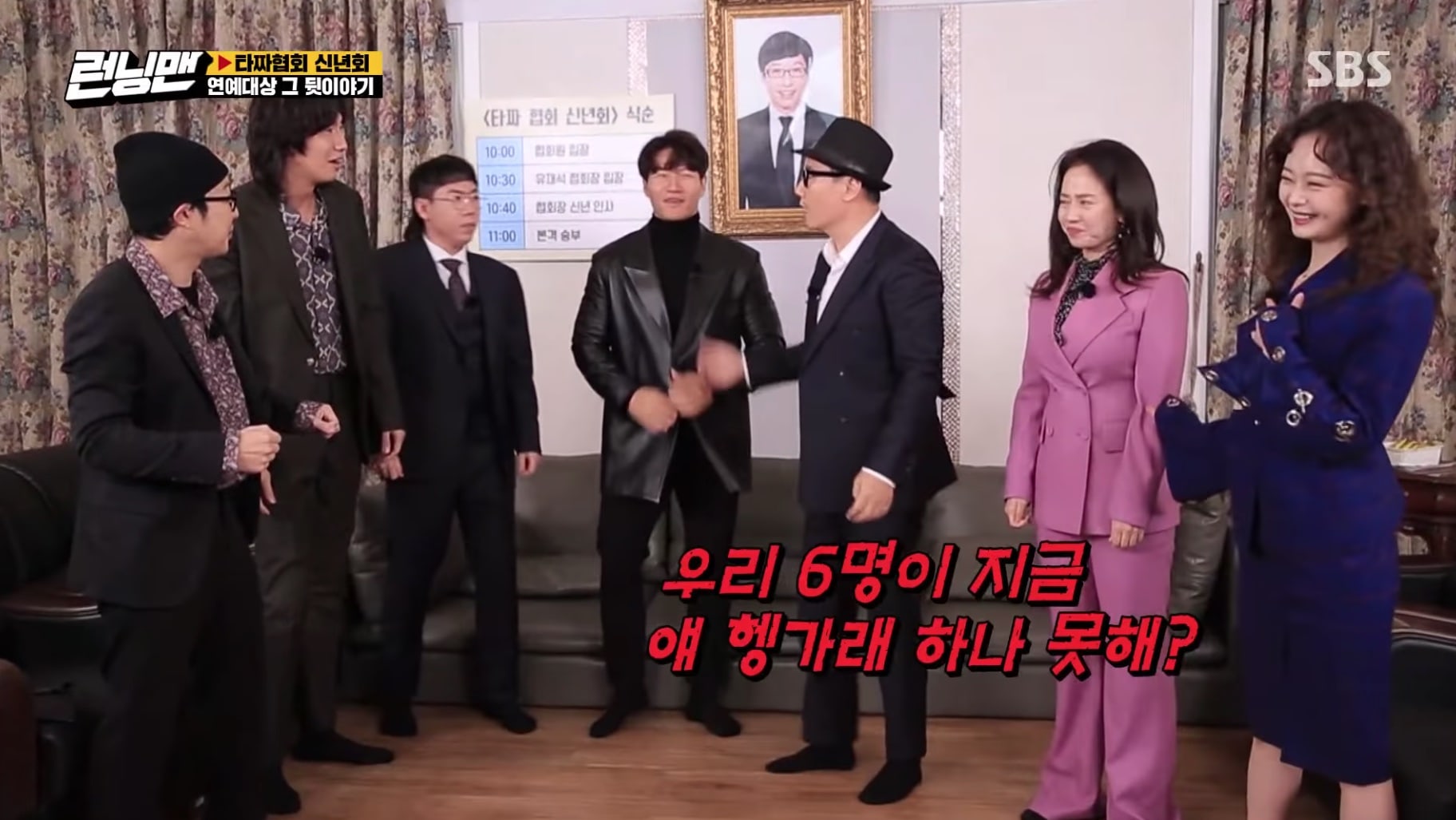 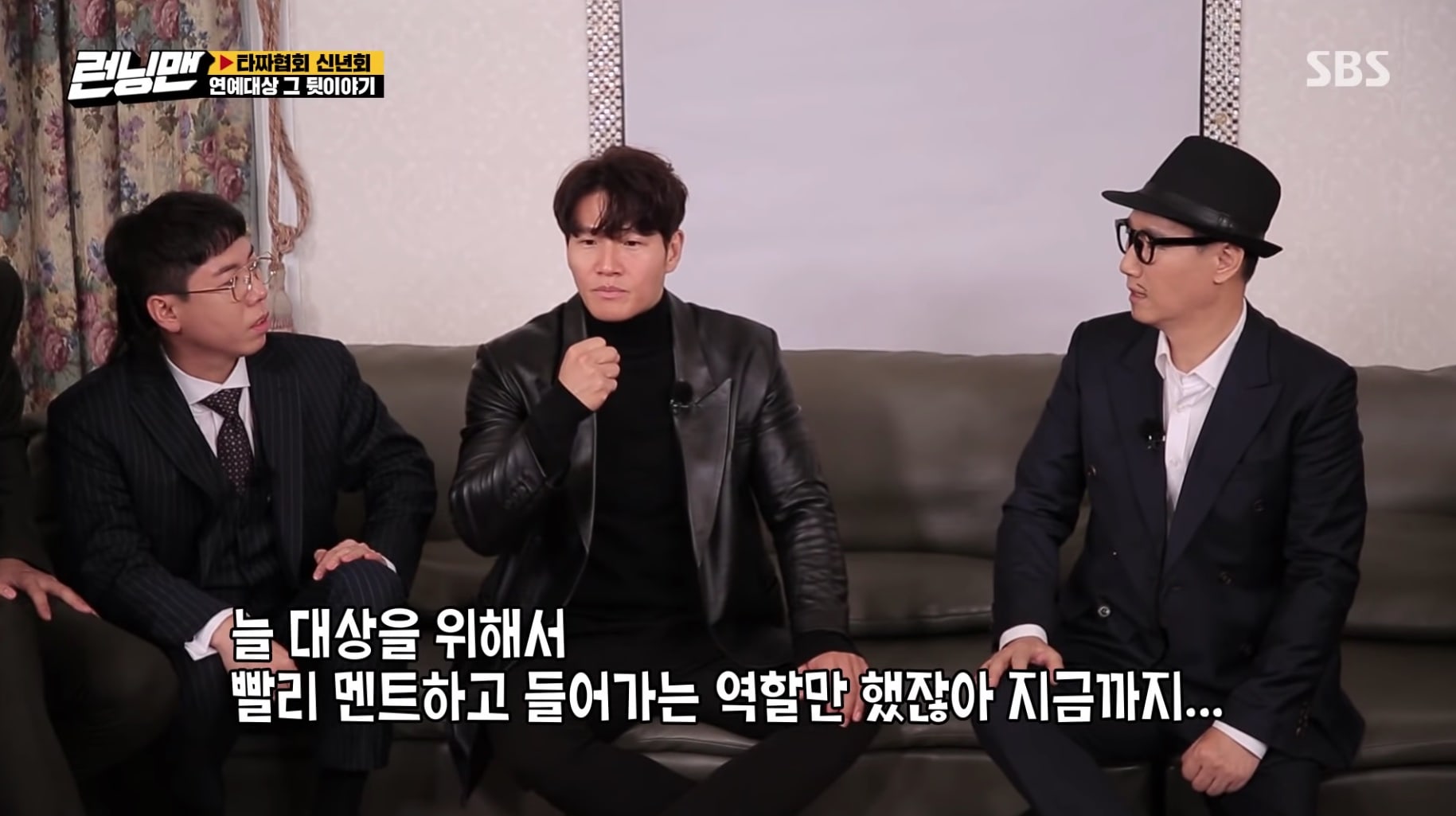 Kim Jong Kook said, “I’ve become used to delivering fast speeches in order to make time for the Daesang at the end. Now that I was at the end and I could talk for a long time, it felt strange.” HaHa asked Yang Se Chan, “You cried when he won, but why didn’t you cry when I won?” Yang Se Chan explained, “When I see someone I know tearing up, I can’t help tearing up as well.” 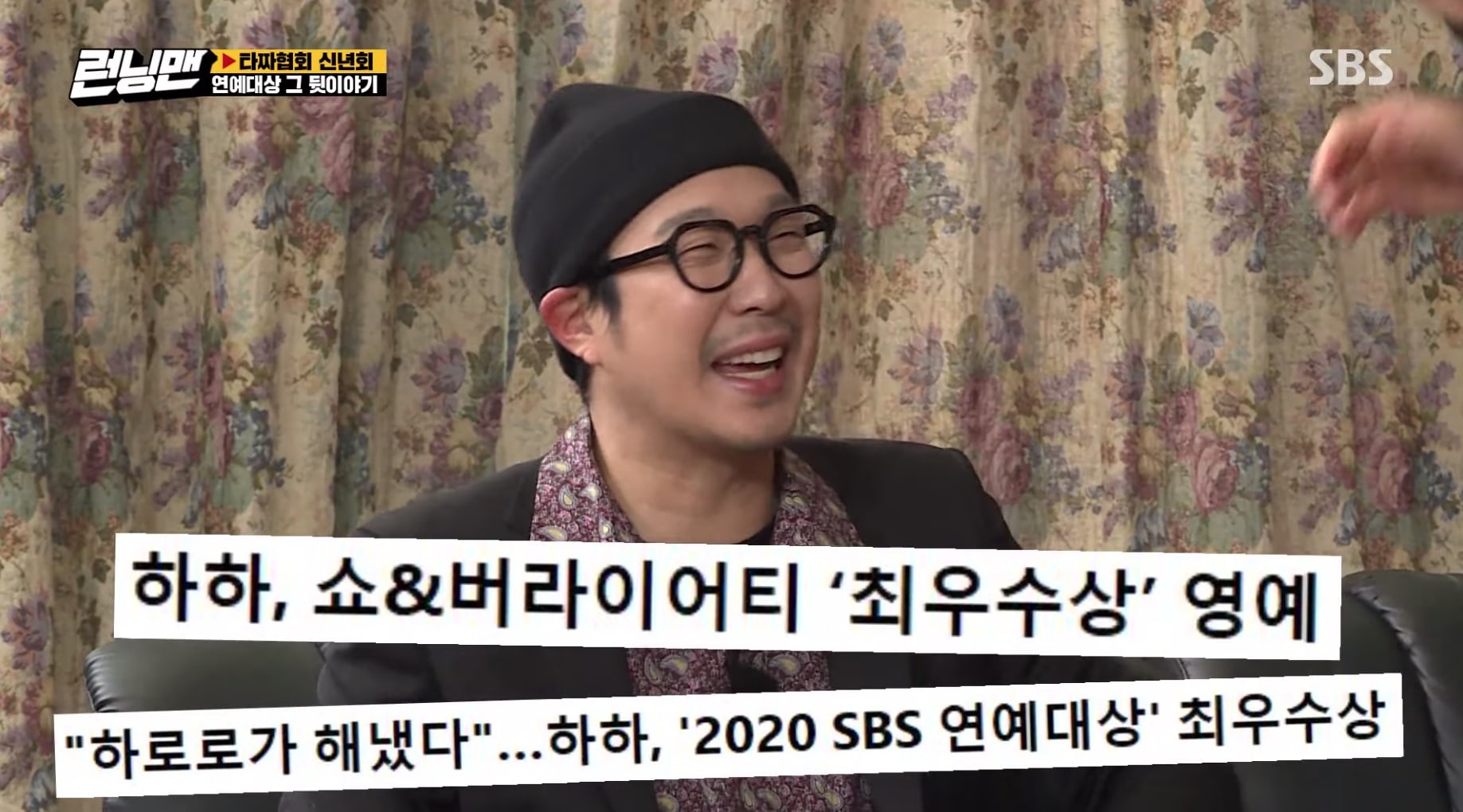 About his own speech, HaHa said, “I want to apologize to Song Ji Hyo. I just ended up talking about whoever I could see in front of me, but Ji Hyo wasn’t there.” Song Ji Hyo had attended the awards with the rest of the cast, but she had left her seat in order to present another award. HaHa added, “I ended up getting a lot of direct messages. People asked me what had happened between Ji Hyo and me. I would appreciate it if she said that she wasn’t upset.” 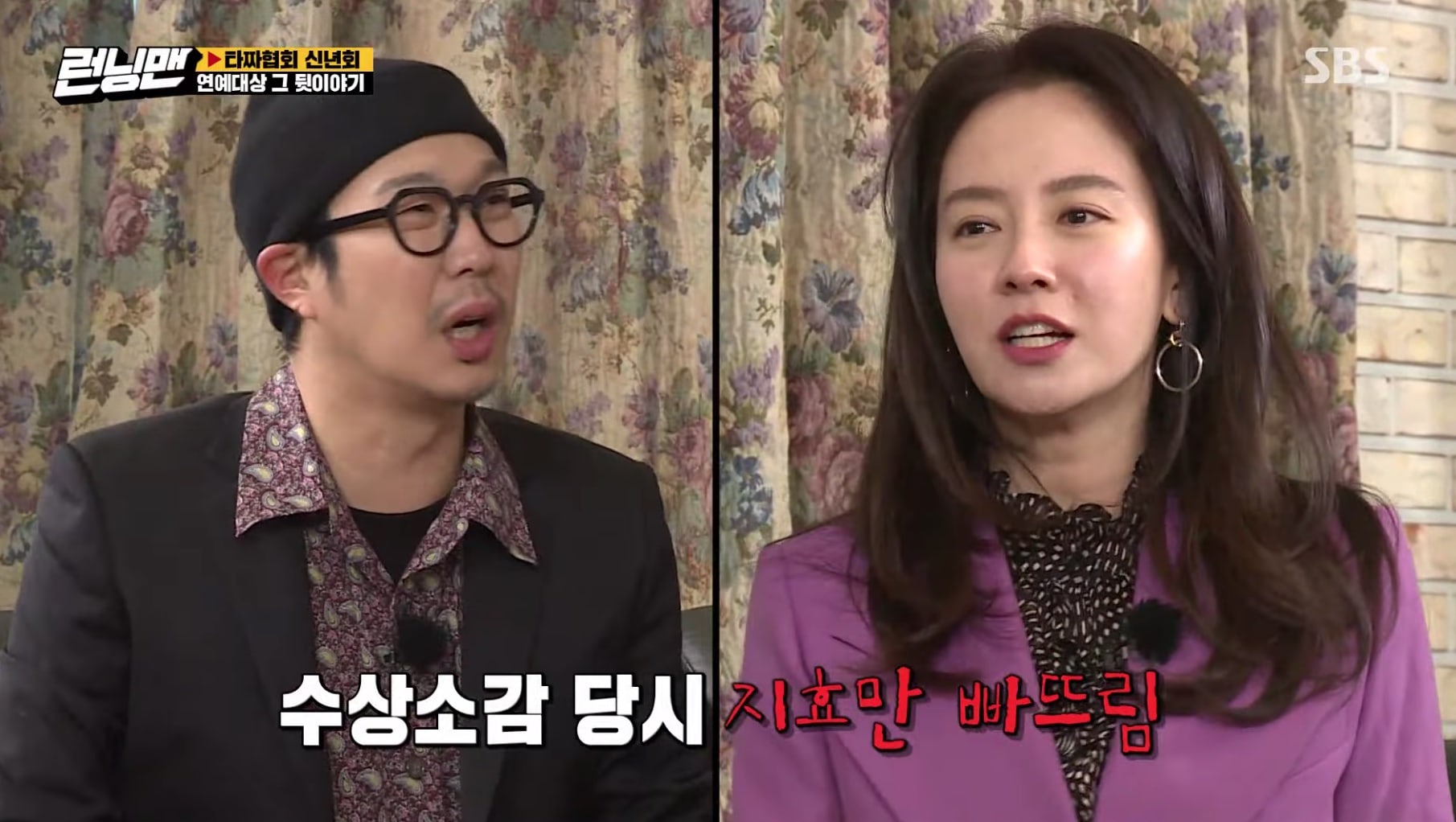 But then Lee Kwang Soo brought up how in her own speech for the Golden Content Award, she had thanked “the oppas, Jun So Min, and Yang Se Chan.” “Oppas” refers to the male “Running Man” cast members who are older than her. However, this leaves out Lee Kwang Soo, who is younger than Song Ji Hyo but wasn’t mentioned by name along with the other two.

And watch the 2020 SBS Entertainment Awards below!