tvN has given us another look behind the scenes of “True Beauty”— this time through the eyes of Kim Min Gi (playing Lim Ju Gyeong’s little brother Lim Ju Young)!

Kim Min Gi introduces himself as Lim Ju Young and explains that he will introduce the rest of his family members and guests who are making dumplings together.

Lim Ju Gyeong’s mother (Jang Hye Jin) and father (Park Ho San) are presented first, and when it’s Moon Ga Young’s turn to tell the camera who she is, she mistakenly calls herself Lim Ju Young and corrects herself with a laugh.

When Kim Min Gi asks, “Who do you think is the winner of the dumpling battle?” Jang Hye Jin cutely says, “Oh, who could it be? Tune in [to find out]!” 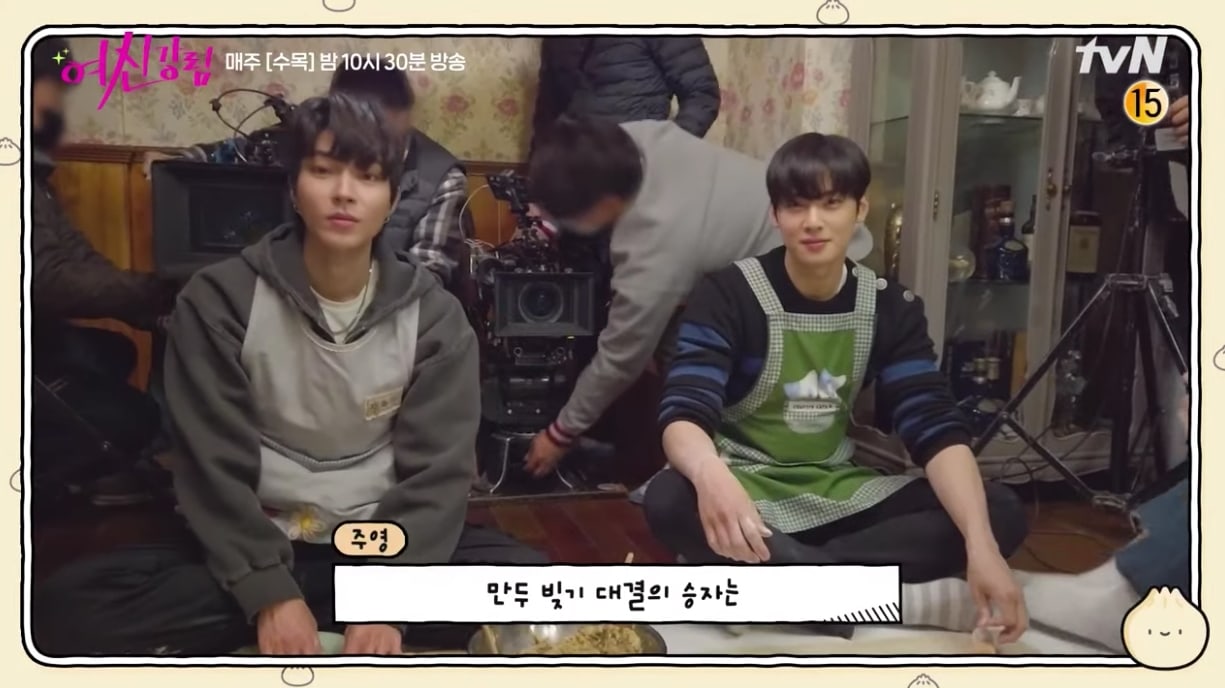 He then asks Park Ho San whom he’d choose between between Lee Su Ho and Han Seo Jun as his daughter Lim Ju Gyeong’s boyfriend, and Park Ho San asks the two candidates, “What’s your drinking capacity?” which prompts Hwang In Yeop to remind him that they’re still high schoolers.

Asked who he personally prefers, Kim Min Gi gives his vote to Lee Su Ho. Disappointed, Hwang In Yeop retaliates, “You don’t know me very well yet. You don’t know anything about me.” Kim Min Gi replies, “Even though you have a girlfriend named Han Go Woon (Yeo Joo Ha), you’re sitting here two-timing,” which makes Hwang In Yeop laugh and look down in defeat.

After some makeup touch-ups, the actors are back to making dumplings. Cha Eun Woo points out, “It’s Ju Young’s vlog, but you’re just filming us.” Cha Eun Woo asks Kim Min Gi a question in an attempt to shift the spotlight to him and tells him to show his face to the camera.

Kim Min Gi then moves to the spot between Cha Eun Woo and Han Seo Jun, and Jang Hye Jin tells them the three of them look exceptionally handsome together. 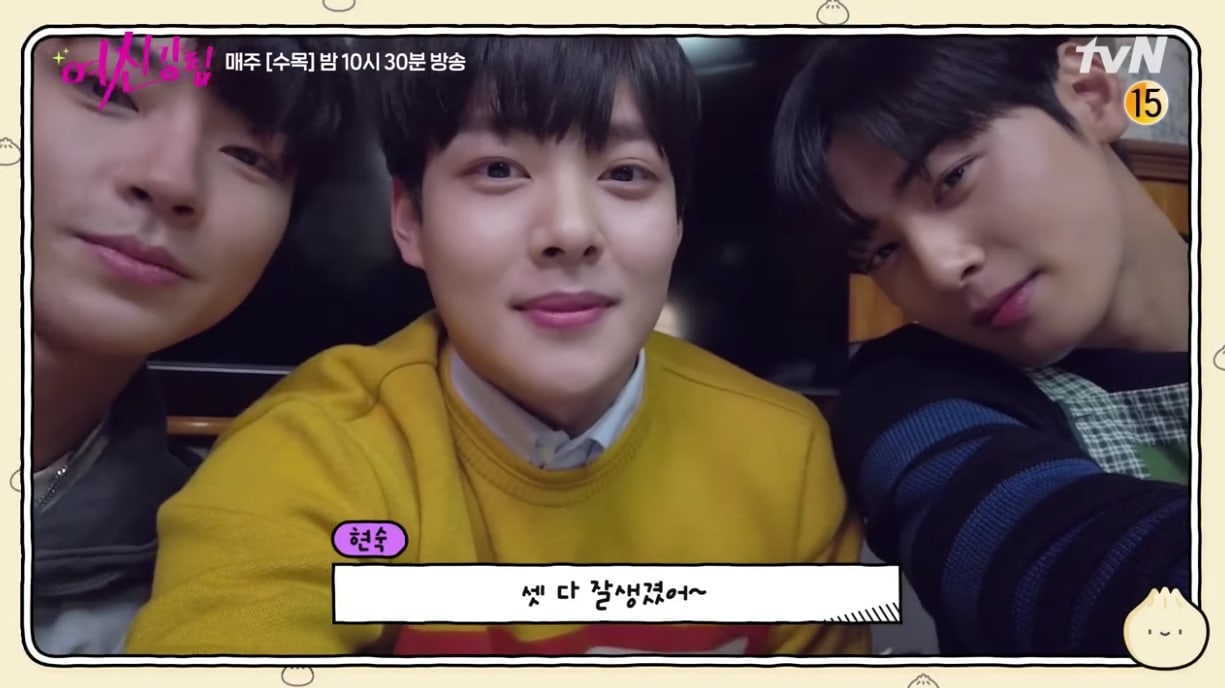 After Kim Min Gi moves back to his original seat, Moon Ga Young tosses a piece of dough to Cha Eun Woo, who then tosses it to Kim Min Gi. Kim Min Gi hilariously comments that he should sell the piece of dough has been touched by Lee Su Ho and Lim Ju Gyeong.

Moon Ga Young and Kim Min Gi then have a moment to themselves in front of the camera, and they talk about why they have such great chemistry as siblings. Kim Min Gi explains that he has a younger sister, and Moon Ga Young shares that she has an older sister. The two conclude that their chemistry was possible because they each have siblings in real life.

Next, Kim Min Gi gives a tour around the house, showing the toilet he used in episode 4, the entrance to his room, which is only an entrance and not an actual room, and Lim Ju Gyeong’s room.

Following a short interview with Hwang In Yeop, who shares that he wants to become part of Lim Ju Gyeong’s family, some people in the background point out that Kim Min Gi resembles Im Siwan and Kim Min Jae. 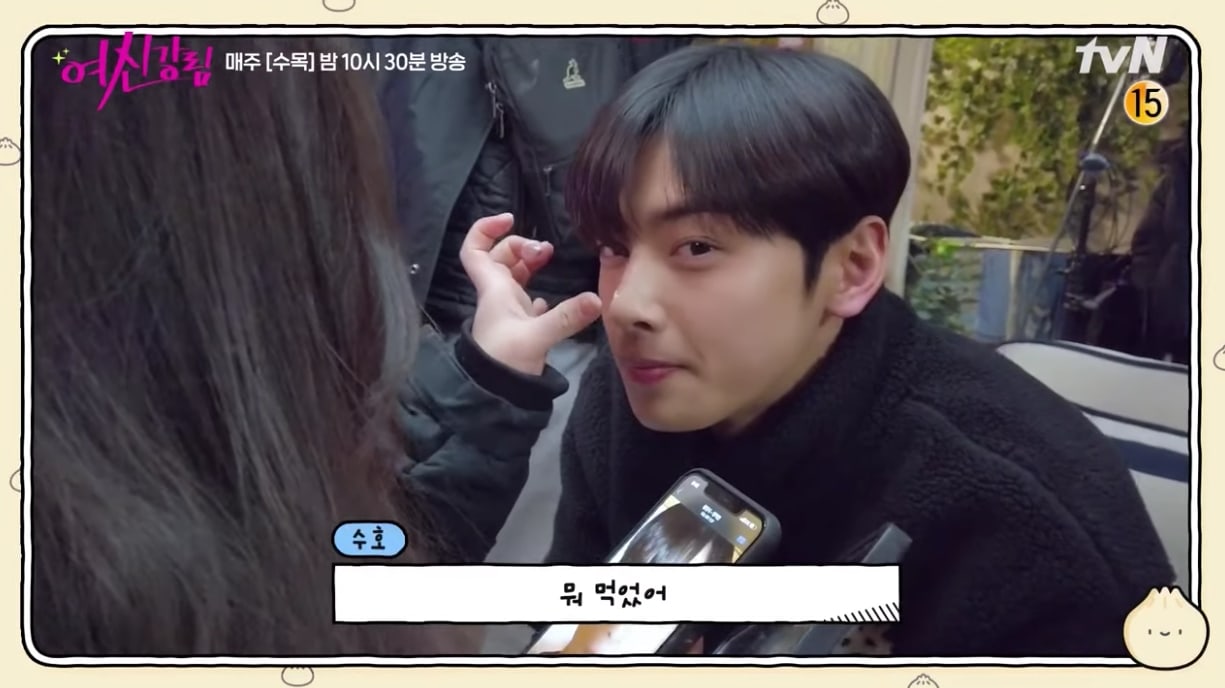 While Cha Eun Woo gets flour applied on his face for the next scene, he and Kim Min Gi share a short conversation about what they ate. When Kim Min Gi refers to Cha Eun Woo as hyung, Moon Ga Young comments, “It’s strange to hear to you being called hyung.” Cha Eun Woo responds, “What, I’m a hyung.”