AB6IX Recommends Songs From Their Comeback Album “SALUTE : A NEW HOPE,” Describes Concepts They’d Like To Try, And More

AB6IX shared their thoughts on their new album, future plans, and more in an interview!

The group made a comeback on January 18 with their repackage album “SALUTE : A NEW HOPE,” which features the title track “STAY YOUNG.” They’ve made their return soon after releasing the album “SALUTE” on November 2, 2020.

Jeon Woong said in their interview, “I think this is our first time making a comeback so quickly, I’m really happy. With the album ‘SALUTE : A NEW HOPE’ as the start, I want to delight [our fans] ABNEW’s eyes and ears more in 2021.” Kim Dong Hyun also said he’s happy to be able to stage new performances for fans so quickly after their November promotions with “SALUTE,” adding, “The songs on this album are so great, so I want to present them to our fans quickly and I’m excited about what their reactions might be.”

“I think I worked hard at practicing while feeling that I want to meet fans soon,” said Park Woo Jin. “I put in a lot of effort because I want to show more diverse versions of myself, and so I think I’ll be able to show a better version of myself during these promotions too.” Lee Dae Hwi shared that while they were making a quick comeback, it felt like it took a long time because of how much he wanted to show fans a new performance soon. “Although there are limits to our promotions compared to before COVID-19, I wanted to communicate with our fans more through music,” said Lee Dae Hwi.

As they introduced their new album and title track, Jeon Woong said, “‘SALUTE : A NEW HOPE’ is an album that aims to deliver a message of hope and comfort to help the uneasiness that young people feel.” Kim Dong Hyun shared, “Our title track ‘STAY YOUNG’ is easy to listen to while also having a cheerful rhythm. It’s a song that brings to mind the word ‘youth.'”

Park Woo Jin shared that compared to their intense and charismatic “SALUTE” promotions, this time around they’ll be showing a cheerful version of themselves with a hopeful energy through “STAY YOUNG.” Lee Dae Hwi said, “This is AB6IX’s first repackage album, and we prepared it with a concept that’s the total opposite of our previous album ‘SALUTE.’ We wanted to convey a message of comfort and hope to young people who are taking on beautiful challenges like us. ‘STAY YOUNG’ is a song that Woo Jin worked on, and it’s one that cheers the listener up, so I hope that many people will listen to it and feel happy.” 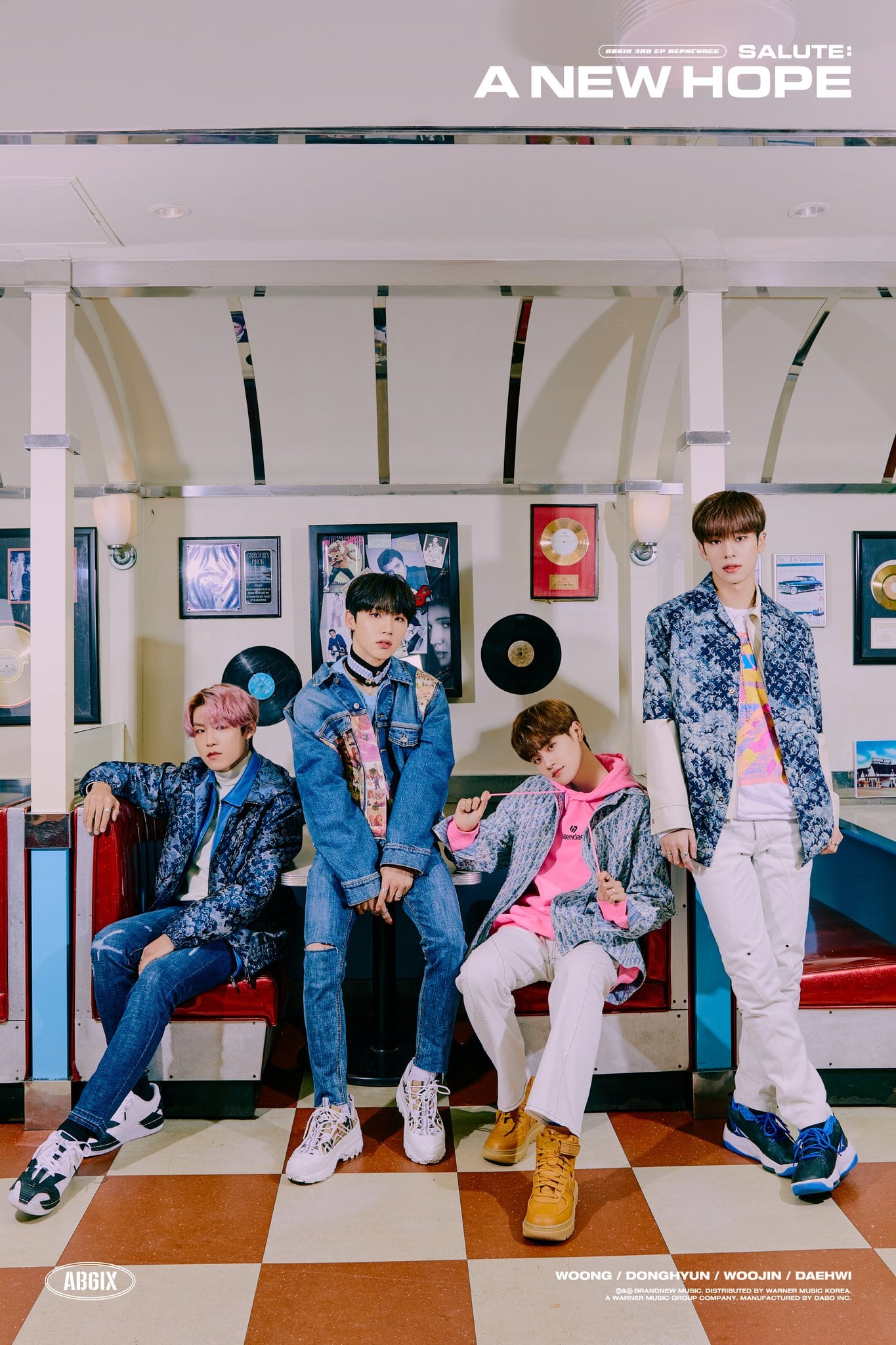 When asked which b-side they’d recommend, Jeon Woong chose “ENCORE (Feat. ABNEW).” He explained, “It features the voices of our fans ABNEW, so I feel moved whenever I listen to it. Once COVID-19 is over, I think it will be really touching to sing this song together with fans at a concert.”

Kim Dong Hyun chose the song “SURREAL (Alternative Rock Mix).” He said, “It’s a track that I’ve really liked since our previous album ‘VIVID,’ but I think it would be good if you listened to it because this remix version with the band’s intense rock sound is also really great.”

Park Woo Jin and Lee Dae Hwi also picked “ENCORE (Feat. ABNEW)” as their recommendations. Park Woo Jin said, “We can’t hear the shouts of our fans when we’re on stage lately because of COVID-19, but ‘ENCORE (Feat. ABNEW)’ includes the voices of our fans so I think it’s great that I’m able to hear our fans’ cheers and shouts whenever I listen to it. Also, I’d recommend it because the song itself is a good fit for winter.” Lee Dae Hwi also described the track as meaningful because of the fans’ voices and shared his hope that they can sing it together with fans at a concert soon.

The group was then asked to describe a concept or genre that they’d like to try for their next album. Jeon Woong shared, “I want to try a song that features the beauty of Korea. I think it would be cool if we performed in hanbok and outfits that show the beauty of tradition or used props to do so. I also think it would be a good fit for AB6IX’s vibe, so that’s why I want to try it.”

Kim Dong Hyun said, “I want to try a dreamy and charismatic concept, but I want to show fans a version of us that’s totally different from what we’ve done before.” Park Woo Jin commented, “I want to try a concept that’s sexy and dreamy. We also frequently talk and put a lot of thought into it so that we’re always showing new versions of ourselves.”

Lee Dae Hwi shared, “We want to make the music that the public of that time wants. In a difficult time like this, we want to include messages in our music that encourage listeners. We’re working hard on writing music now too, so you can look forward to it.”

Finally, AB6IX spoke about their promotion plans and resolutions for 2021. Jeon Woong said, “2021 has now begun, and I hope that we promote happily without the members getting hurt. We will work hard at promotions so that more people in the public can hear AB6IX’s music. Please show a lot of love and interest.” Kim Dong Hyun shared their plans to work hard at promoting their first album of the year and asked everyone to show a lot of love for “STAY YOUNG.”

Park Woo Jin said, “We plan to work hard at promotions in order to create happy times for fans and to repay fans by showing a better and newer version of ourselves.” Lee Dae Hwi shared, “We’ll be releasing more albums and showing many different sides of ourselves this year. Please keep showing your support and love.”