Epik High lined up their new tracks in the top ranks on major realtime charts!

On January 18, Epik High returned with the first part of their 10th full album “Epik High Is Here.” The album includes double title tracks “Rosario” featuring CL and Zico as well as “Based on a True Story” featuring Heize.

Soon after release, the two title tracks grabbed the No. 1 and No. 2 spots on the realtime charts of major music sites Bugs and Genie, while their b-sides were also ranking high on the charts.

“Rosario” has also hit a peak of No. 8 so far on Melon’s 24Hits chart as of January 19 at 5 p.m. KST, while “Based on a True Story” reached No. 9 at that time. The chart is calculated based on accumulated streaming (40 percent) and downloads (60 percent) from the past 24 hours.

Tablo has tweeted to express his gratitude toward the group’s fans HIGH SKOOL. When a fan shared a screenshot of the songs lined up in the Top 9 on Bugs, he wrote, “Unbelievable. Thank you so much, HIGH SKOOL.” He also shared a tweet showing the tracks’ success on Genie, writing, “You’re all truly………” with crying emojis. 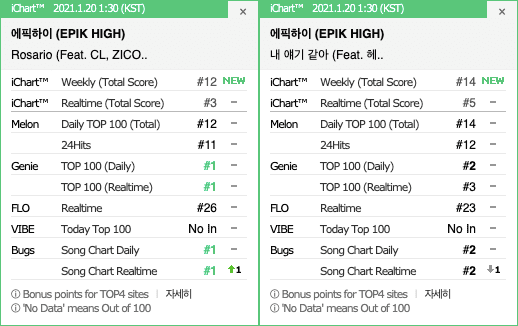