TXT takes the top spot on Oricon’s weekly album chart with “Still Dreaming,” while EXO’s Baekhyun is in second with the mini album “BAEKHYUN”!

On January 27, Japan’s largest music statistics site Oricon shared its chart for the week of February 1 (based on January 18 to 24). The top spot is taken by TXT’s first full Japanese album “Still Dreaming” with 86,892 estimated sales. This is the third time that TXT has topped Oricon’s weekly album chart, after they did so with “The Dream Chapter: ETERNITY” and “minisode1: Blue Hour.” Their first-week sales on Oricon for their latest album are also their highest yet.

TXT released “Still Dreaming” on January 20, and it debuted on Oricon’s daily album chart at No. 1 on the January 19-dated ranking. It went on to score seven days in a row at the top.

EXO’s Baekhyun has grabbed the No. 2 spot on Oricon’s weekly album chart for February 1. His first Japanese mini album “BAEKHYUN” came out on January 20 and debuted on the daily album chart at No. 2. It now takes second place on the weekly chart with 47,746 estimated sales. 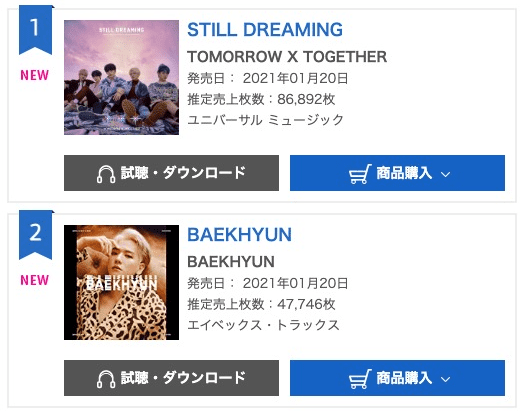 Congratulations to TXT and Baekhyun!

EXO
Baekhyun
TXT
How does this article make you feel?