There’s only one more day to go until the premiere of tvN’s “L.U.C.A.: The Beginning”!

“L.U.C.A.: The Beginning” is an action thriller about a man named Ji Oh (Kim Rae Won) who is being chased for his special abilities, and a violent crimes detective named Gu Reum (Lee Da Hee), who is the only one who remembers him. Kim Sung Oh plays Lee Son, who is the chief among Ji Oh’s pursuers and used to be part of the special forces.

Ahead of the drama’s premiere, the lead actors of the drama chose points viewers should look out for in “L.U.C.A.: The Beginning.”

Kim Rae Won, who plays the protagonist Ji Oh, shared, “It’s a first attempt at this genre, so I’m also looking forward to finding out how viewers will react. A lot of effort was put into the post-production process. You will be able to enjoy highly refined graphics.” 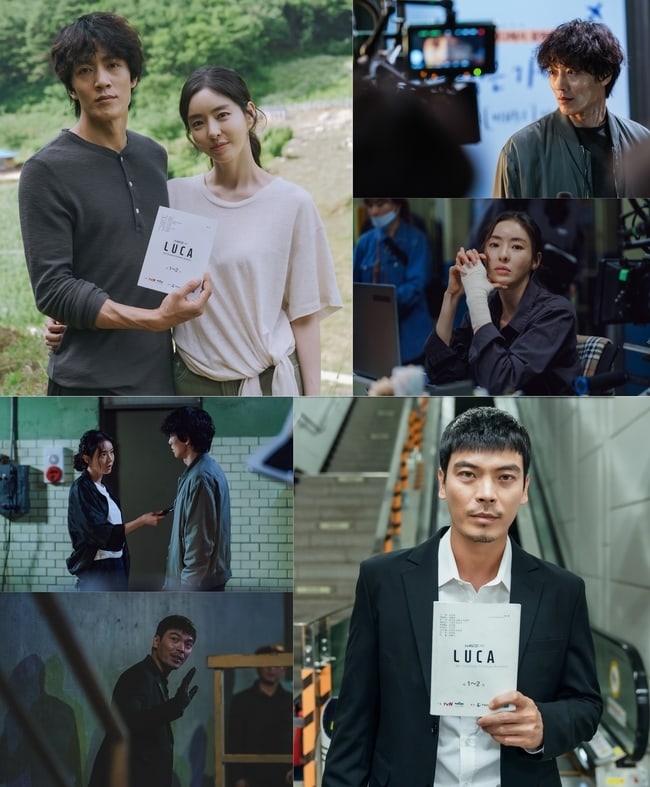 Lee Da Hee plays Gu Reum, the only person who remains in Ji Oh’s memory. Gu Reum is determined to find the truth behind the case of her parents going missing during her childhood, and her whole life is changed when she meets Ji Oh, who has special abilities. Lee Da Hee explained, “It’s a drama that will go by so quickly as you watch that you’ll say, ‘It’s already over?’ Just from watching the acting of seniors Kim Sang Ho, Park Hyuk Kwon, and Jin Kyung, time will fly by.” She added, “Thanks to the reliable director Kim Hong Seon and filming director Choi Young Hwan, you’ll feel the same fun as watching a movie. It’s a drama unlike anything you’ve ever seen, with my new sides and cathartic action scenes. Please tune in to the premiere on February 1.”

Kim Sung Oh takes on the role of the chaser Lee Son who pursues Ji Oh like a madman with his peculiar instincts. Originally from the special forces, Lee Son is someone who strictly follows every command he is given, and he throws everything aside to catch Ji Oh. The actor said, “‘L.U.C.A.: The Beginning’ is a drama that will suck you in the moment it starts. It’s so gripping that as you watch it, you’ll find that it’s already over.” He continued, “Refreshing action scenes await. Just watching those scenes will help you relieve stress.”

“L.U.C.A.: The Beginning” premieres on February 1 at 9 p.m. KST and will be available on Viki.