“Celebrity” was released on January 27 as a pre-release track from IU’s upcoming full album. It swept major domestic realtime music charts upon its release and soon achieved a certified all-kill.

As of January 31 at 7:30 p.m. KST, iChart announced that the song had also scored a perfect all-kill. 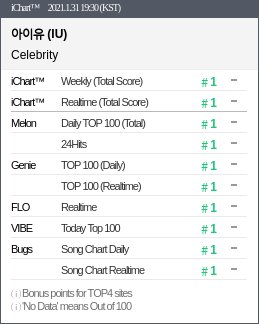 Check out IU in the drama “My Mister” below!