Watch: Kim Soo Hyun Shares His Version Of The “Celeb Challenge” For His Friend IU

EDAM Entertainment recently started the Celeb Challenge for IU’s latest song “Celebrity.” The challenge involves posting a video that creatively shows your natural self that lies behind your glamorous appearance on social media.

On February 4, Kim Soo Hyun posted a clip that includes photos of him in various settings for the Celeb Challenge.

IU commented with rose emojis on the post and also said, “Wow, such good handwriting,” suggesting that Kim Soo Hyun hand-wrote the text “celebrity” in the clip. 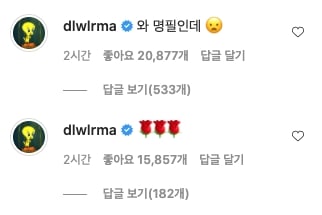 Kim Soo Hyun and IU have been good friends since they co-starred in KBS2’s “Dream High” in 2011 and “The Producers” in 2015. He then appeared in her music video for “Ending Scene” in 2017, and she made a special appearance in his film “Real.” Kim Soo Hyun also made a cameo appearance in her 2019 drama “Hotel Del Luna.”

Check out IU’s original version of the “Celeb Challenge” below!

Watch the two celebs in “The Producers” here!

IU
Kim Soo Hyun
How does this article make you feel?