New videos give a behind-the-scenes look at the filming of “True Beauty”!

Based on a hit webtoon, “True Beauty” is a romantic comedy about Lim Ju Gyeong (Moon Ga Young), who zealously uses makeup to hide her bare face and combat her insecurities about her looks. After she meets Lee Su Ho (Cha Eun Woo), a popular student who has his own emotional wounds, they share each other’s secrets and learn to heal through love. Hwang In Yeop plays Han Seo Jun, who appears rebellious but has a surprisingly warm heart.

A making-of video begins with the scene of Lim Ju Gyeong drunk at a restaurant, which includes her resting on Han Seo Jun’s shoulder and shaking him as she yells. Between takes, Moon Ga Young checks on Hwang In Yeop, asking him, “Is your neck sore?” but he assures her it’s not. 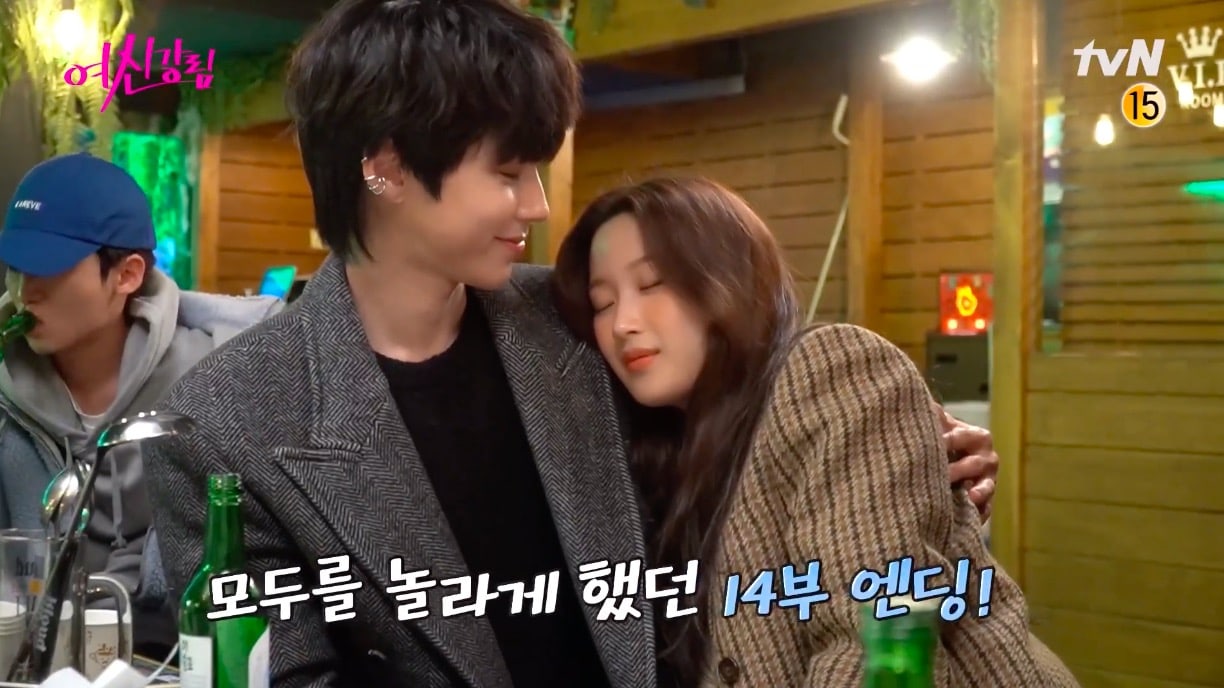 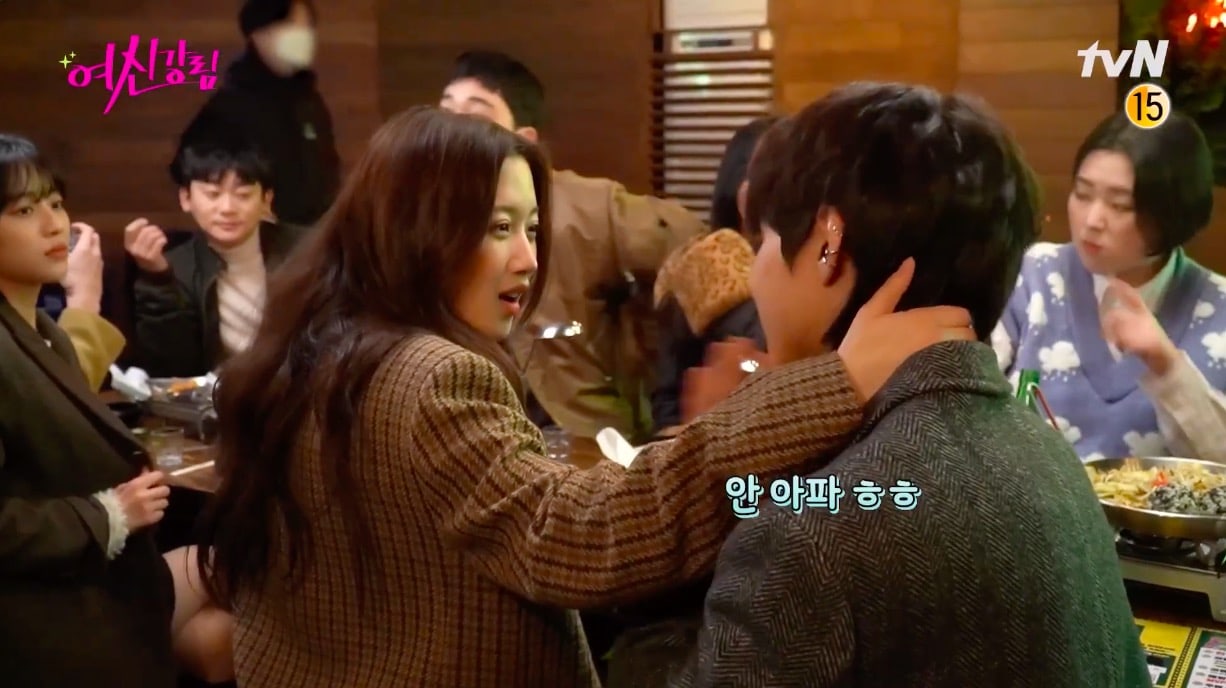 Hwang In Yeop explains that his character has dressed up well to celebrate becoming an adult, and he says that he hopes that Lim Ju Gyeong likes it. When he’s asked, “Who does Ju Gyeong belong to?”, Hwang In Yeop replies, “She’s mine” and quickly leaves the frame with a laugh.

WJSN’s Dayoung makes a cameo in the show as an idol, and she’s shown filming her scene with Moon Ga Young. In an interview, Dayoung says, “I enjoy watching this drama, so it’s such an honor to be able to make a cameo. She’s so different from my usual character, so acting as her was very difficult!” Between shots, Moon Ga Young looks at the making-of camera, pointing at Dayoung and giving a thumbs up and a nod, and the pair smile at each other. 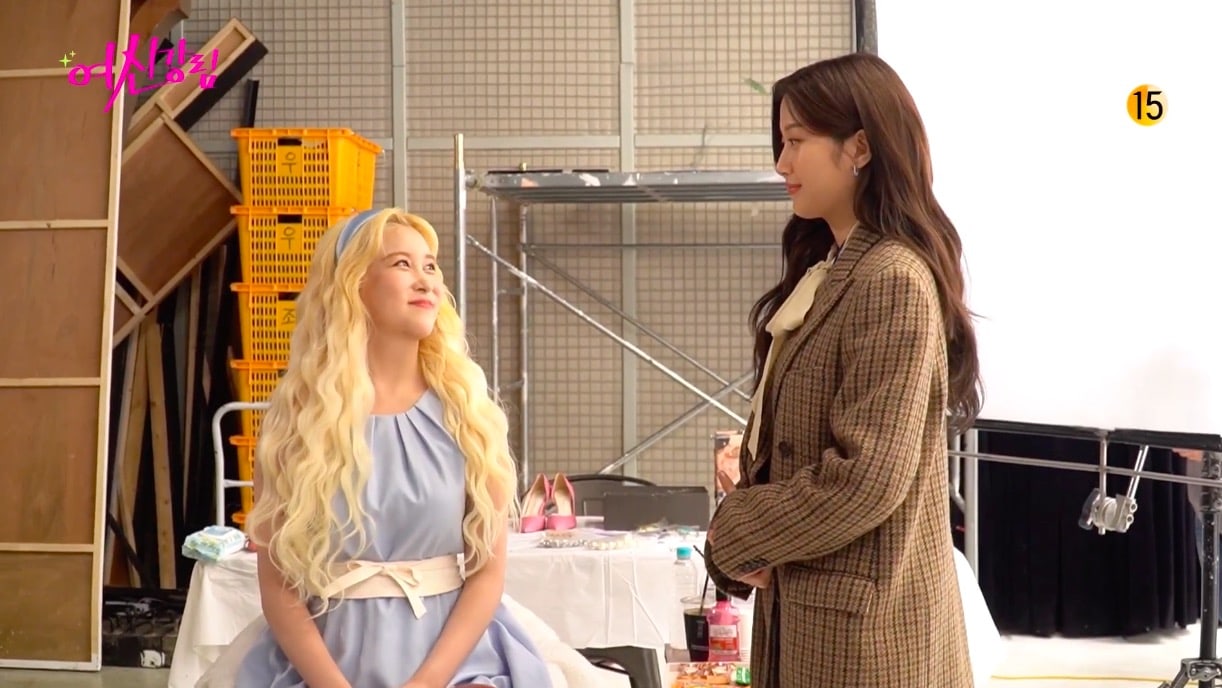 Kim Young Dae and Cha Eun Woo are introduced, and they bow to each other. It’s pointed out that they’re both of similar heights, and Kim Young Dae makes the others laugh by pointing out how good-looking Cha Eun Woo is.

“It was great to see Director Kim Sang Hyeop after a long time,” says Kim Young Dae in his interview. “There were many people there who I’d worked with on ‘Extraordinary You,’ and I was very glad to see them. It was an honor to be able to work together with everyone on the great project ‘True Beauty.'” 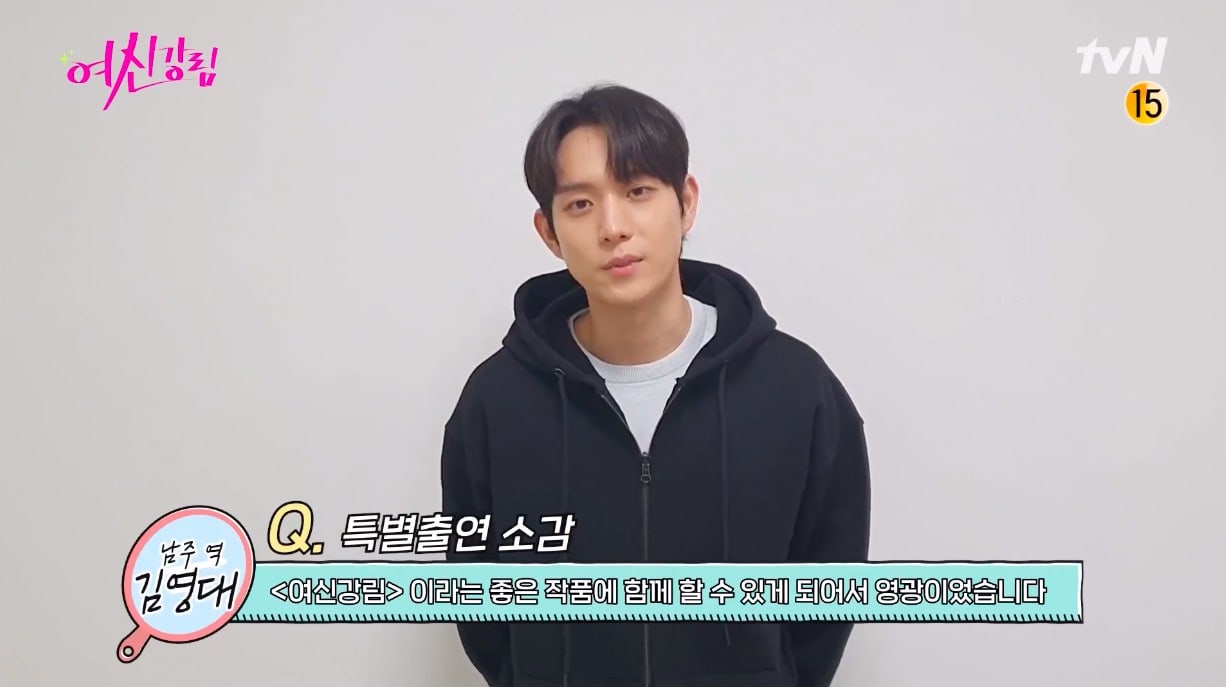 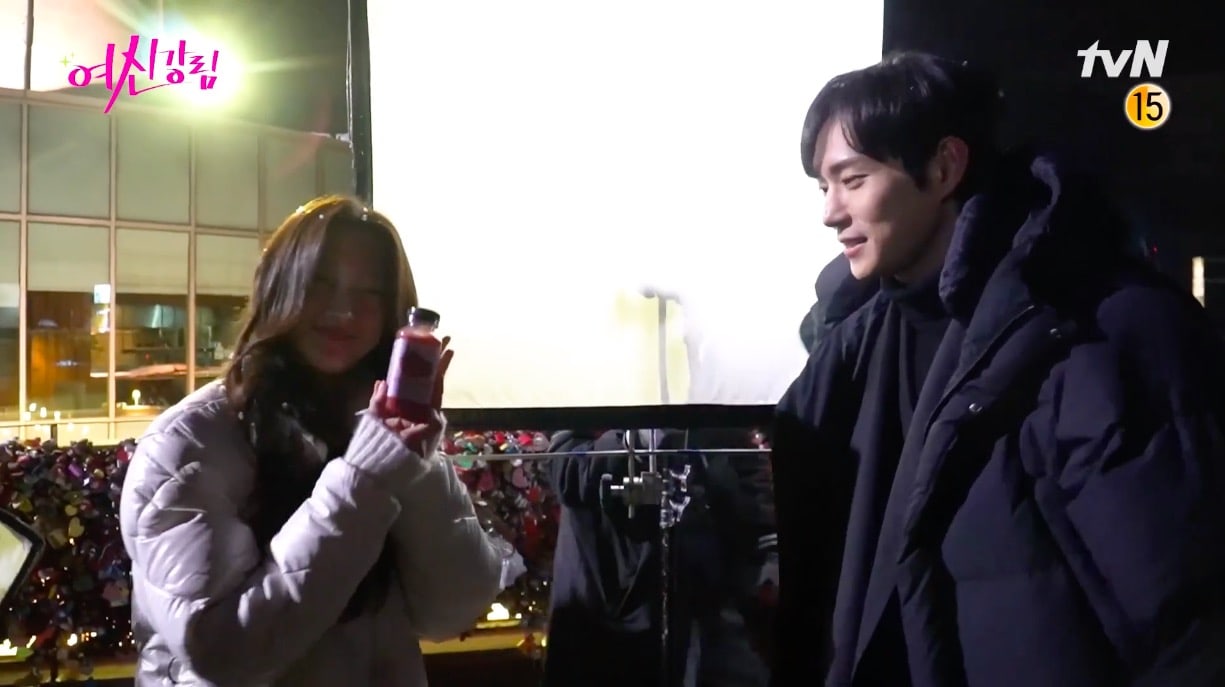 Cha Eun Woo tells the camera that he’s now an adult version of Lee Su Ho, sharing that he’s changed his hair style and coat, and he’s wearing dress shoes too. He and Moon Ga Young then rehearse and film the scene where Lim Ju Gyeong pushes away Lee Su Ho’s hands. Later on, Cha Eun Woo and Hwang In Yeop also rehearse their characters’ own reunion. 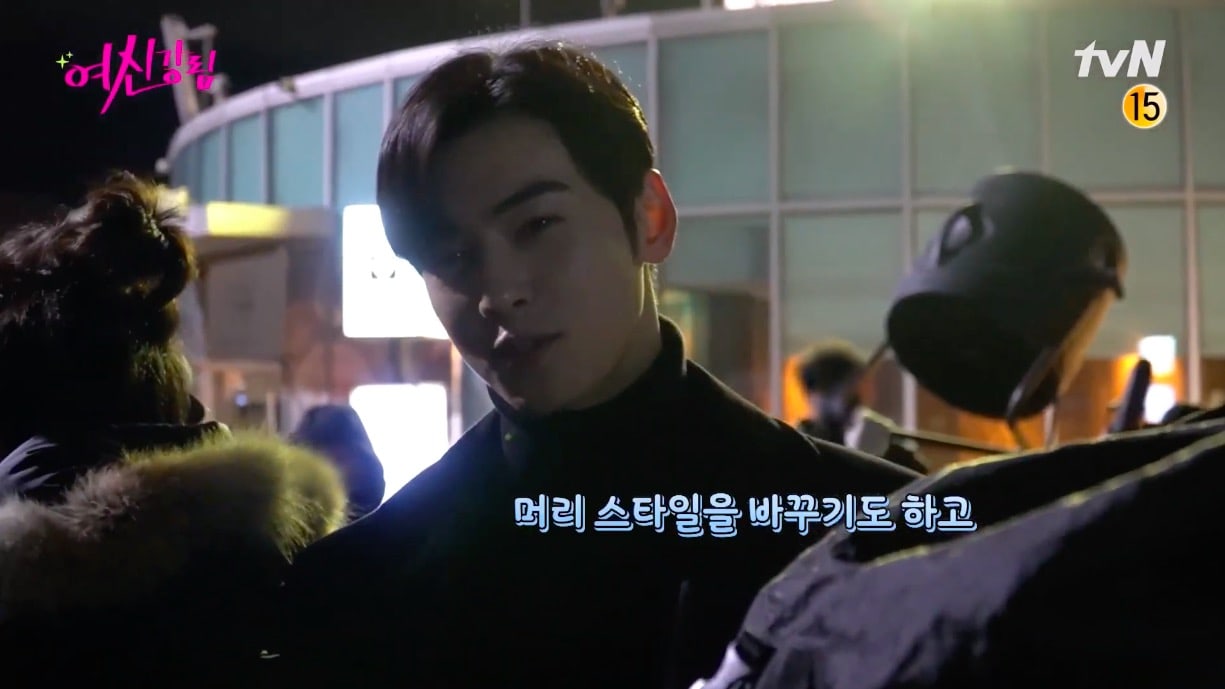 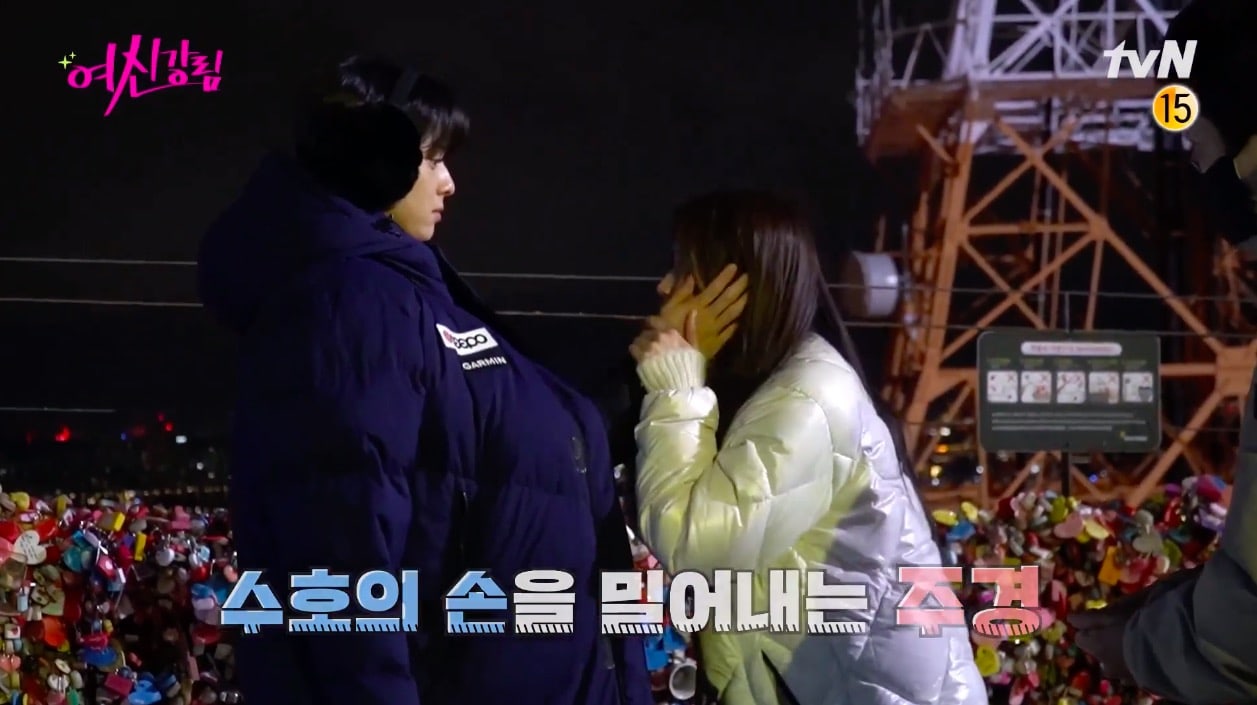 “How am I as a student?” she asks him. “Do you think I have potential to improve? What percentage would you rate my potential?” Hwang In Yeop replies, “Even if you’re just at this level…” and trails off. “Why are you being evasive?” jokes Moon Ga Young. 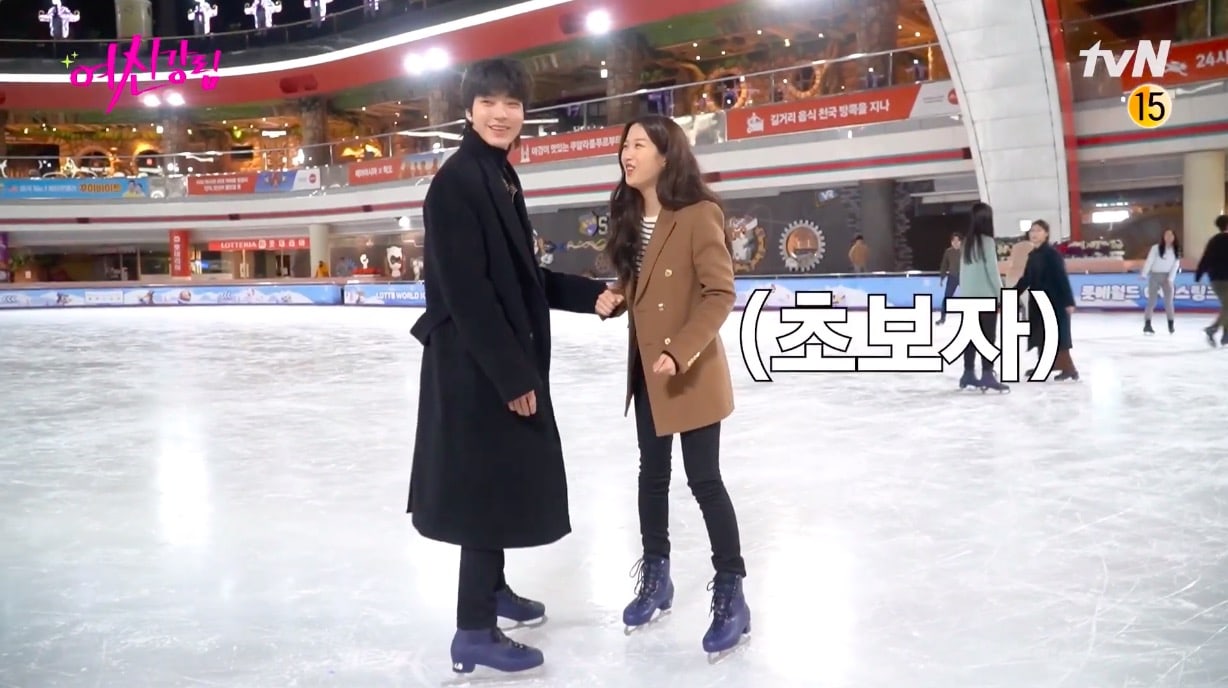 In another clip, the pair films the scene in which Han Seo Jun and Lim Ju Gyeong walk together at night when she’s drunk. Hwang In Yeop is amazed by how slippery the octopus is, as it was his first time touching one.

Moon Ga Young and Hwang In Yeop then have fun playing with the small car, and they’re surprised to find that it even has air conditioning. They go on to film the scene where their characters almost kiss, and they come up with ideas first, with Moon Ga Young suggesting that Hwang In Yeop puts the lid back on the water bottle for her after she takes a drink.

Hwang In Yeop shares, “This is my first time on figure skates! It’s not easy.” The caption reveals that the actor used to speed skate when he was young, and he quickly gets used to the different type of skates, zooming around the rink with a smile.

Newbie skater Moon Ga Young cautiously glides on the ice and gets some help from Hwang In Yeop. As she holds on to his arms, she’s soon able to lift her feet and skate around, developing a big smile as she does so.

Hwang In Yeop later jokes to the camera, “I’ve come all the way to the ice rink in order to win Ju Gyeong. It’s not easy.” The pair go on to film an off-rink scene where she puts a bandage on her hand after falling down, after which Hwang In Yeop is complimented by the director on his improvised line.

In addition, a further video gives a look at Kim Young Dae’s cameo appearance. “It was really fun,” shares Kim Young Dae. “I felt like I’d returned to being Nam Joo for the first time in a while. There’s a scene where the character Ju Gyeong in the story is mistaken and calls me ‘Su Ho.’ I actually played the character Cha Su Ho in ‘Cheat on Me If You Can,’ so that felt amazing.”

“True Beauty” wrapped up with its finale on February 4.