Sunny Shares Favorite Girls’ Generation Song, Opens Up About Her Insecurities, And More

Girls’ Generation’s Sunny reflected on her career and shared her goals for the future in a recent interview with bnt International.

Sunny started off the interview by talking about her two cats, Salt and Pepper. “Since I’m almost always at home these days I’ve devoted all of my attention to them,” she said. “As I spend more and more time with them, I think I’m growing more affectionate and endeared to them. Although they seem like dog-like cats, I can’t help but smile when they stick only to me like gum.”

As for how she spends her time at home, Sunny said she enjoys watching Netflix, reading web comics, or playing games on her phone. 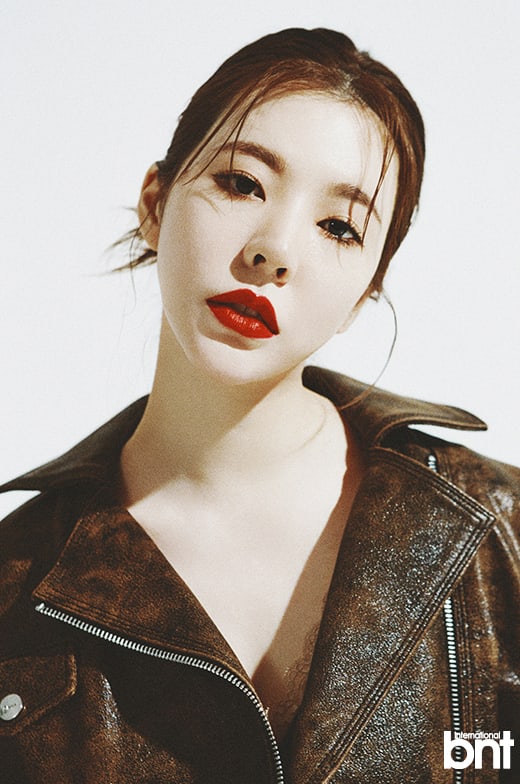 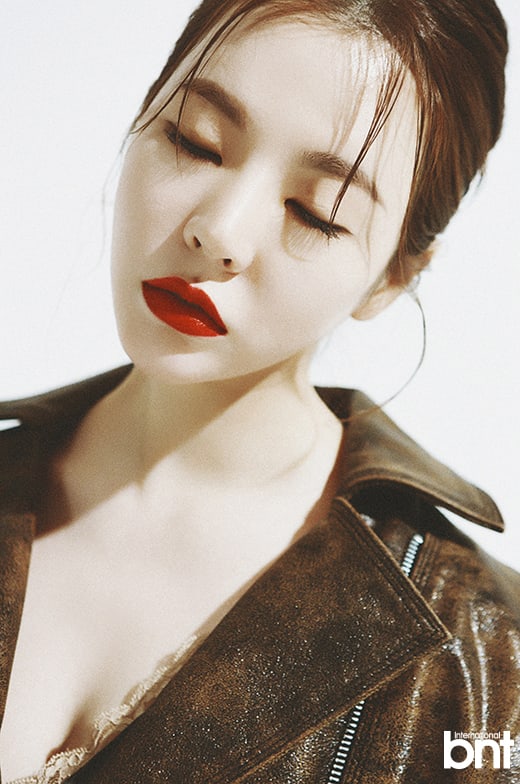 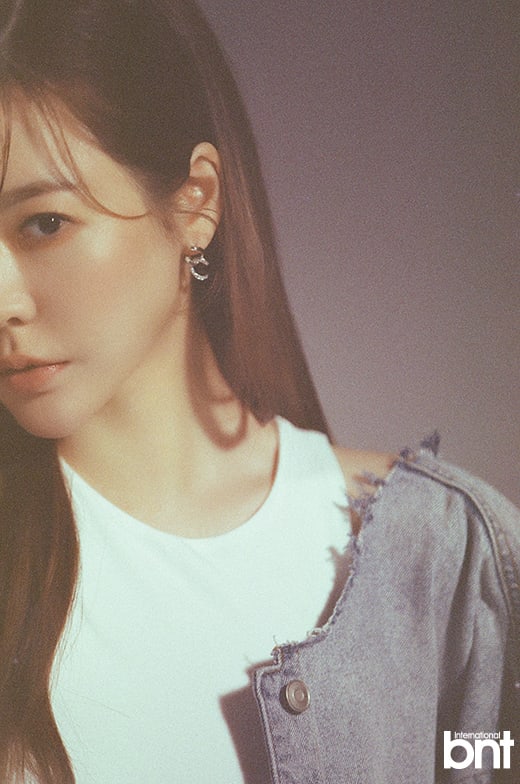 Sunny opened up about how her stage name influenced her personality as she commented, “After the name ‘Sunny’ was decided, I think I started to take after that name. I have heard that my expressionless face was sort of scary, so I work hard to smile on a daily basis.” She added with a laugh, “Sometimes it isn’t easy.”

When asked about how she endured all of the high-energy performances during her time in Girls’ Generation, Sunny revealed that the members worked to increase their stamina before their debut by running along the Han River. “Since I was young at the time, my physical stamina was a lot better then than it is now. Recently, I’ve realized the importance of exercise again. There’s nothing like exercise to increase your stamina,” she said. 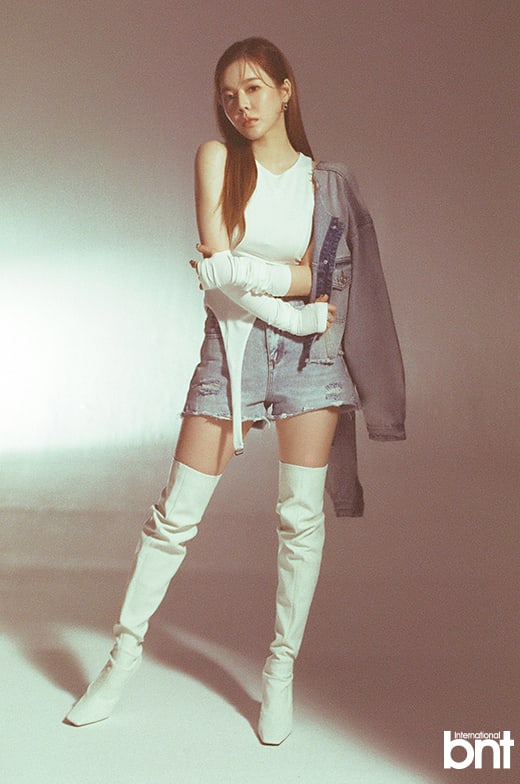 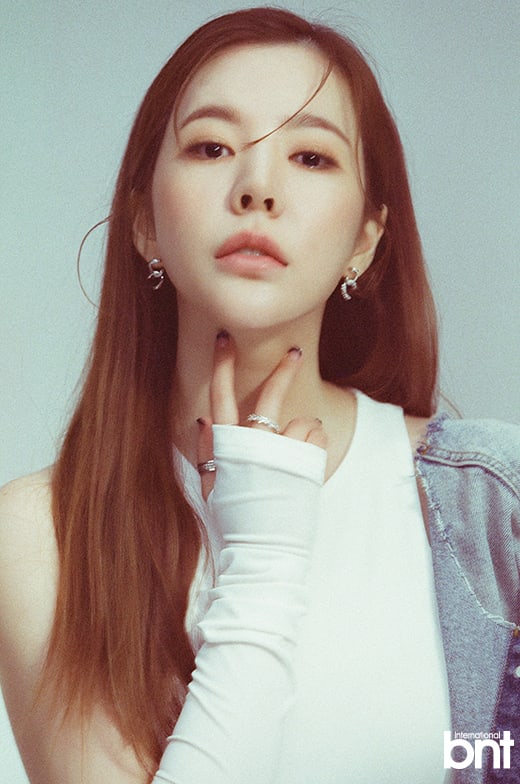 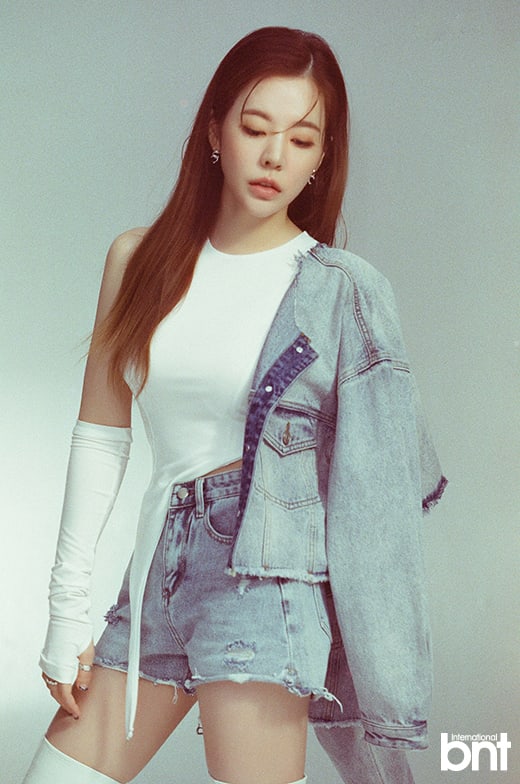 Sunny debuted as a member of Girls’ Generation in 2007 with the song “Into The New World.” She spoke about how the song has a special place in her heart, even considering their other popular songs such as “Gee” or “Genie.” “I’ve thought about why this could be, and I think it’s because so many people continued to sing and listen to it,” Sunny responded. “When we first started practicing it I worried, ‘Will we be able to get support from the general public?’ Now I’m really thankful that many people have gained strength from the song and cherish it in their memories.”

Sunny also noted that “Gee” is another song she cherishes, due to the response the group received from the public. She then shared that “Oh!” was a song where she thought she pulled off the concept well. 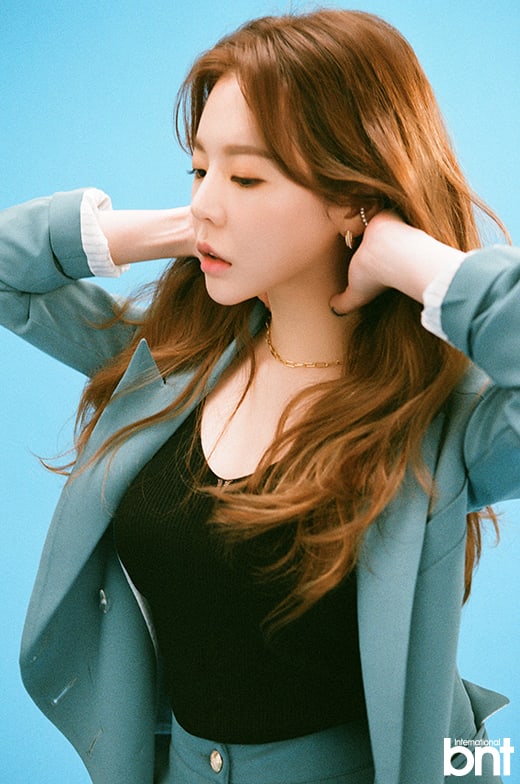 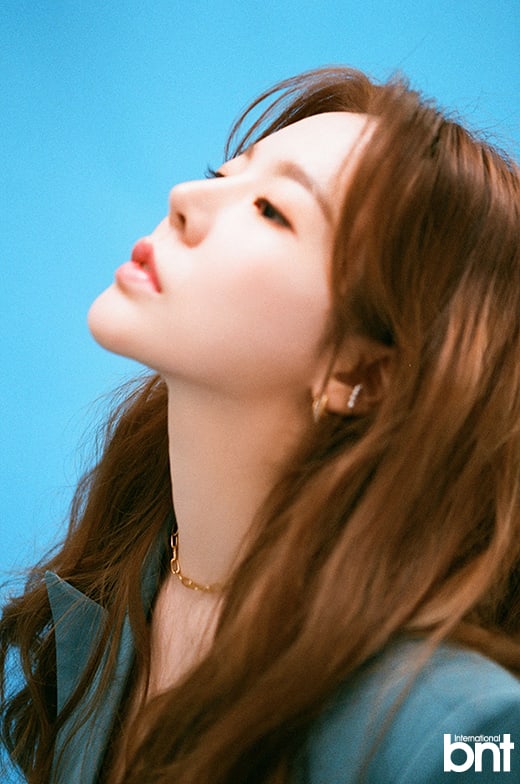 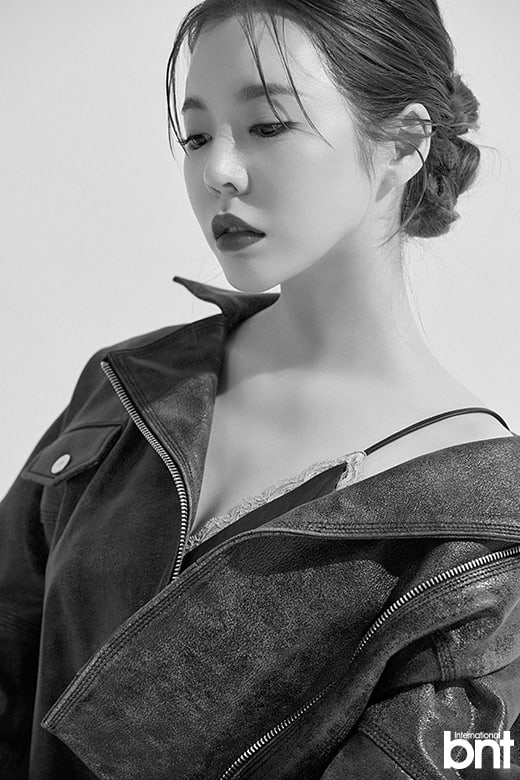 The interviewer asked for Sunny’s thoughts on Girls’ Generation being called a “textbook girl group.” Laughing in embarrassment, Sunny replied, “I’m so thankful whenever I hear the nickname. When I look at the members, each and every one of them is so full of charm. They can act well, sing well, and also bring good energy to variety shows. Since we challenged various concepts and had really good outcomes, I think that’s one of the reasons [for the nickname].”

Commenting on the other members’ various acting and singing endeavors, Sunny said, “Every now and then when I see the members doing their individual activities I wonder how much hard work they put in to get those results. I feel bad for them but I also think they’re amazing.” 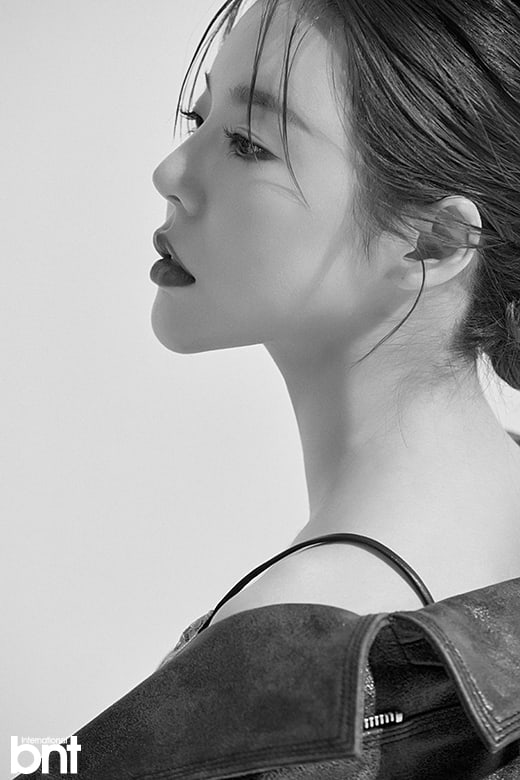 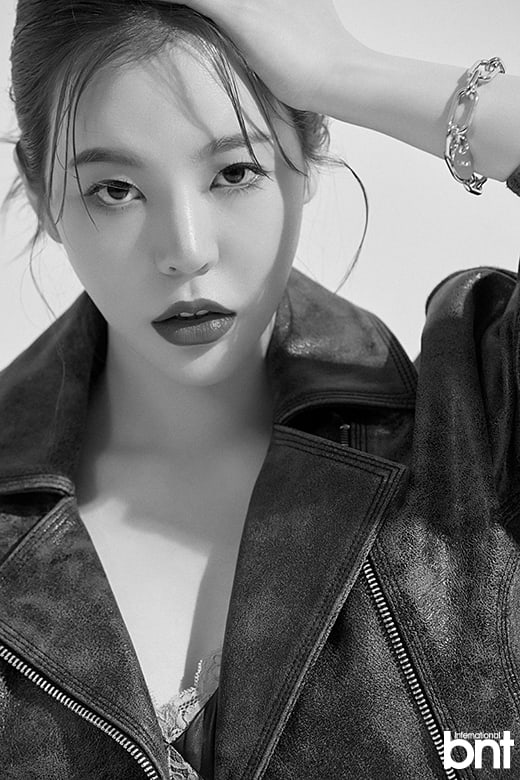 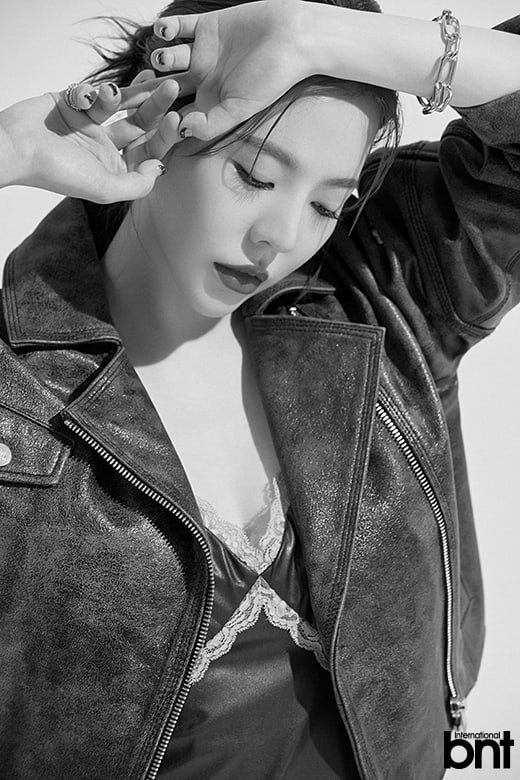 Sunny’s real name is Lee Soon Kyu, but she said she sometimes has trouble distinguishing between her real name and her stage name. “I’ve done activities under the name ‘Sunny’ for around 14 years now, so sometimes I get mixed up,” she said. “There was definitely time of confusion, like adolescence, but now I think I’ve realized things like, ‘Oh, this is when I feel comfortable,’ or ‘This is Lee Soon Kyu.’ Back then I would work hard to show everyone the Sunny of Girls’ Generation, but now I’m just embracing myself, whether it be as Sunny or as Lee Soon Kyu.”

Continuing with a laugh, Sunny added, “My family even calls me Sunny. They’ve called me by my stage name since my debut to make me get used to it, and it eventually became a habit.”

Sunny recently appeared on the show “On and Off,” where she opened up about her concerns regarding her singing voice. Referencing her worry, she explained, “It’s not that I hate my voice, it’s that there was a time where I was unsure of what kind of singing method would be right for me. While filming, it can be embarrassing to share personal stories. After making my confession on broadcast, I think it was extrapolated to mean that I didn’t like my voice. Thanks to that, I was able to regain my confidence and also find out how my fans felt.” 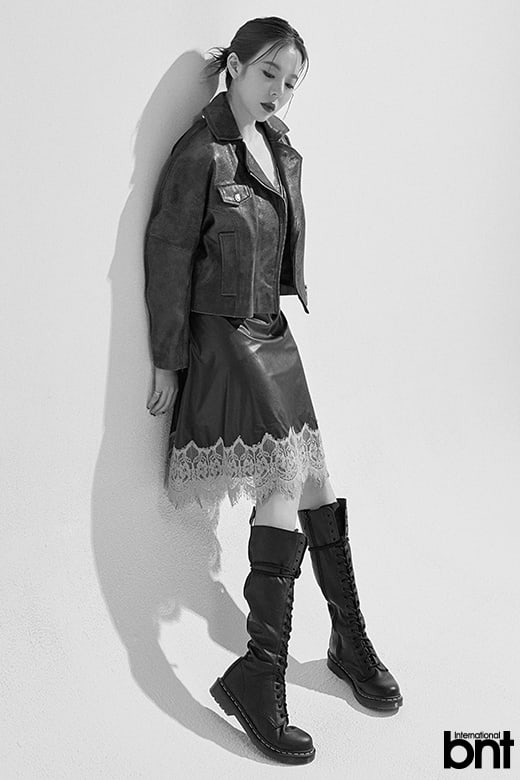 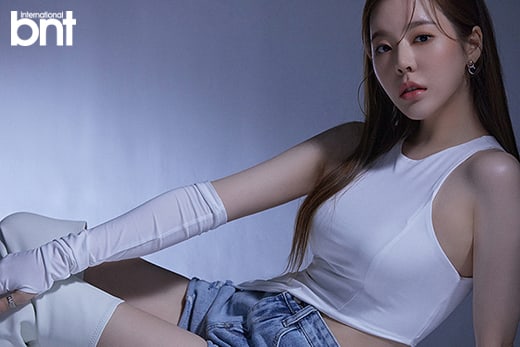 When asked what music style she would like to try, Sunny responded, “Since there’s a big age gap between me and my sisters, I naturally came across a lot of old songs when I was young. Listening to those songs now, I find myself thinking it would be nice to work on songs together with artists like them. I listen to music by artists like Lee Moon Sae, Jeon In Kwon, and Cool’s Lee Jae Hoon.”

Sunny also expressed her desire for inner change rather than attempting a new image or concept. “I want to become a comfortable person who can reveal her more natural and honest sides to the public,” she shared. “Maybe it’s because I only focused on work since I was young, but I’m lacking experience in a lot of areas and there’s still lots of room for me to grow. I want to hurry and mature so I can become someone with a strong sense of self.” 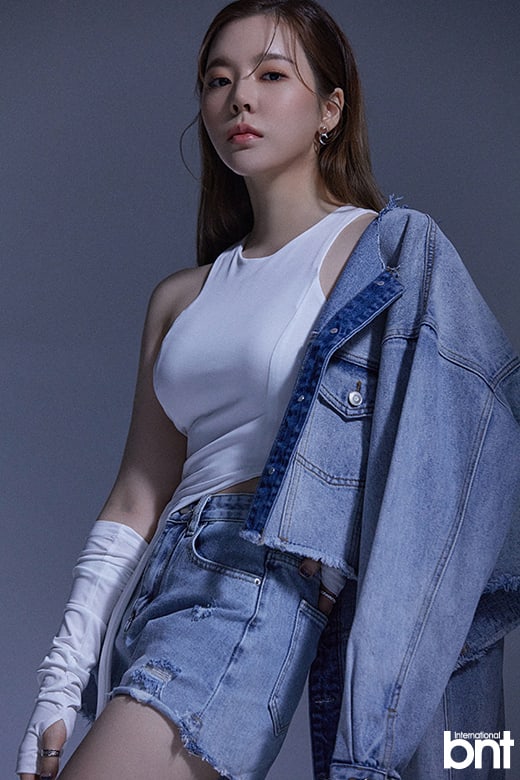 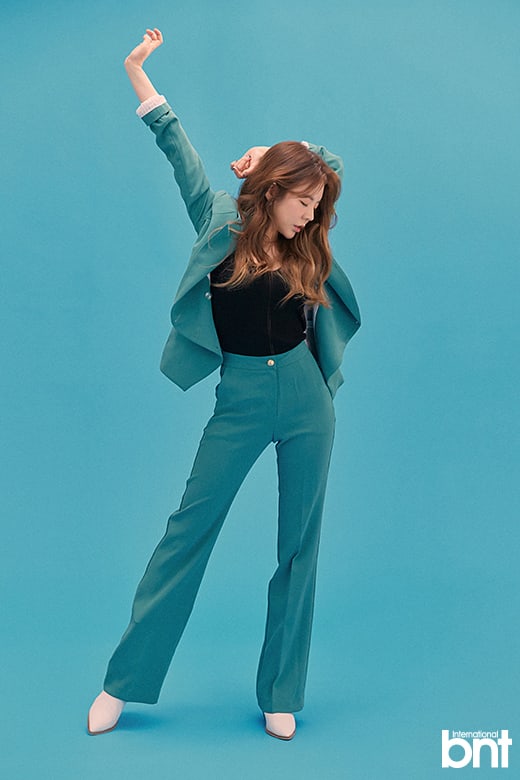 Having recently entered her 30s, Sunny shared that she hoped to become someone who could appreciate the mundaneness of everyday life. “Although it’s good to run forward, there’s also elements of happiness every day. From now on, I want to become a person who appreciates the happy moments in daily life,” she said.

In about two months, it will be 5,000 days since Girls’ Generation’s debut. Sunny was surprised by the calculations as she mused, “When I think about it, I really decided on a career path quite early. I wanted to become a singer since I had enjoyed singing and dancing since middle school, and I’ve been realizing that dream and receiving continuous love for over 10 years. Looking back on it, it was a really happy but surprising process. It was a dream I couldn’t achieve alone and one that I was able to shoulder after meeting good companions, and it’s one I’m able to protect thanks to the fans who have supported me all the way. I want to give sincere thanks to my fans and those who have helped me to keep going forward all the way to 5,000 days.”

Girls' Generation
BNT International
Sunny
How does this article make you feel?