Byul recently spoke candidly about her difficult family past and her gratitude for her husband HaHa.

Byul and HaHa have been married since 2012 and have three children together. Byul explained that she initially had no plans to have multiple children, explaining, “Before we had any time to think about our newlywed life, our child Dream suddenly appeared, so we raised him thinking of him as a blessing. Since being an only child is lonely, I thought that we should have a second child, raise them quickly, and enjoy life.”

She continued, “At this point, I thought that it’d be great to have a daughter, but it was a son. I had no idea that I’d live my life as a mother of two boys. It really wasn’t easy. My personality changed. My voice changed into a soldier’s.”

A few years later, Byul held her first concert in a while and had started promoting again, when she went on vacation with HaHa and became pregnant with their third child. She confessed, “When I found out I was pregnant, I teared up thinking that I already had so many things planned. Even though I shouldn’t.”

Byul continued, “However, I endured it well thinking that if I just worked a little bit harder, my body would recover, I would lose weight, and I’d be able to return healthier than anyone else.” She added, “The more you have babies, the prettier they get.”

As a surprise guest, Byul’s close friend Kim Soo Mi, who is married to rapper Gaeko, also made an appearance. She revealed, “When girls get together, don’t they just end up making fun of their husbands a bit? Go Eun [Byul’s birth name] starts it slowly. She starts by imitating the way HaHa comes home late after drinking. After imitating him, she ultimately concludes with a compliment. She still says that her husband is the best.” 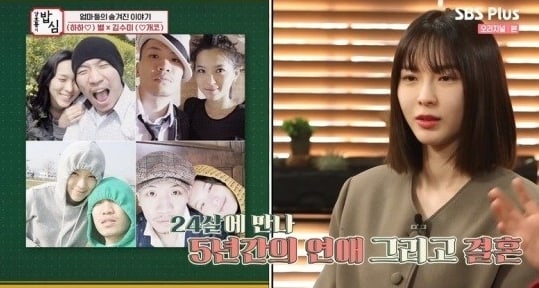 Byul explained that she successfully secured her JYP Entertainment audition by personally attending Park Jin Young’s fan meeting in the past. After making her debut under JYP Entertainment, she began actively promoting until her father became sick.

She explained, “It was always my dad’s dream for me to debut. It was to the point where he would say his life would be complete if he could watch his daughter’s concert from a front row seat. After debuting, I was preparing for my concert when I got a call from my mom. She told me that my dad’s throat had been incorrectly damaged while getting a gastroscopy and that he had to go to a bigger hospital. He went to the hospital but then got an acute bacterial infection so he had to undergo a resection surgery for the inflamed area.”

At the time, Byul thought that her father would make a full recovery in no time. However, her father had suffered brain damage. She shared, “After being unconscious for about a month and a half, I heard that he had woken up. He could only open his eyes and move his hand. After that, there was no improvement.”

Byul continued, “After my father became like that out of the blue, he lay down from the time I was 21 until right before my marriage before passing away. I think he must’ve had a really hard time.” 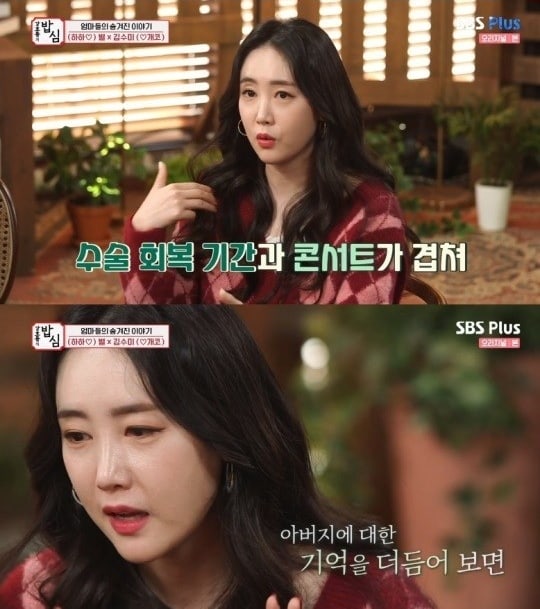 After the accident, Byul revealed that she had even thought of forgoing marriage. She explained, “Although I never firmly decided that I wasn’t going to do it, I thought, ‘Can I do it?’ I felt intimidated. When girls get married, they have this idea of their dad walking them down the aisle, holding their hand. Except for when I was really little, it was rare to even see my dad sitting up.”

Regarding the burden of medical fees, Byul shared, “It wasn’t just the medical fees that were huge. All the money we saved went to hospital fees and now that no one was making money, our living expenses were a problem. As it was a medical accident, there was also a medical lawsuit for around seven years. On top of the lawsuit fees, at the time he had fainted, my older brother was serving in the military. It was so hard. I was never once able to save any of the money I had earned while working.”

After spending her twenties like this, Byul came to meet her now-husband HaHa. She shared, “This is something I still can’t forget today, but in the car back to Seoul after meeting my father, [HaHa] told me, ‘Go Eun, it’s such an honor that I get to join this family.’ He said that if he was with this family, that there would be nothing to fear as long as he lived.”

Byul explained, “To be honest, you could consider it a flaw. To have someone who is sick in your family could be intimidating, but he told me first that this family was so great and asked how we survived all this time. I got teary, I was so thankful.”

The singer also revealed that she heard of her father’s passing on the day they shot their wedding photos. She commented, “After registering our marriage, we had time before our wedding so we held a mini wedding among ourselves in the form of a service. The next day was our wedding shoot but I got a call on my way there. They said they thought my dad was about to go. I was on my way to the hospital after hearing the news, but my dad couldn’t wait for me.”

She also planned the funeral together with HaHa. Byul explained, “My entire family was all in a state of chaos. Since we had registered our marriage first, [HaHa] was qualified to be a resident. So many of his acquaintances came so we were able to beautifully send him off without [my father] feeling lonely or miserable.”

Byul added, “If I had faced the funeral without my husband, I wonder how I would’ve done it. This is something I will be thankful to him for, for the rest of my life.”