SHINee made their return to JTBC’s “Ask Us Anything”!

The February 20, SHINee guested on “Ask Us Anything” as a group for their first time in five years.

As all of the members besides the youngest member Taemin had completed their mandatory military service, they started off by talking about their experiences in the military. Minho, the most recent member to be discharged, shared, “I feel like I’m flying. Just the fact that I’m recording ‘Ask Us Anything’ is making me happy.” Minho served in the Marine Corps, which is known to be more rigorous and strict than the other military branches. Asked how it was, Minho explained that it had been a good match for him. 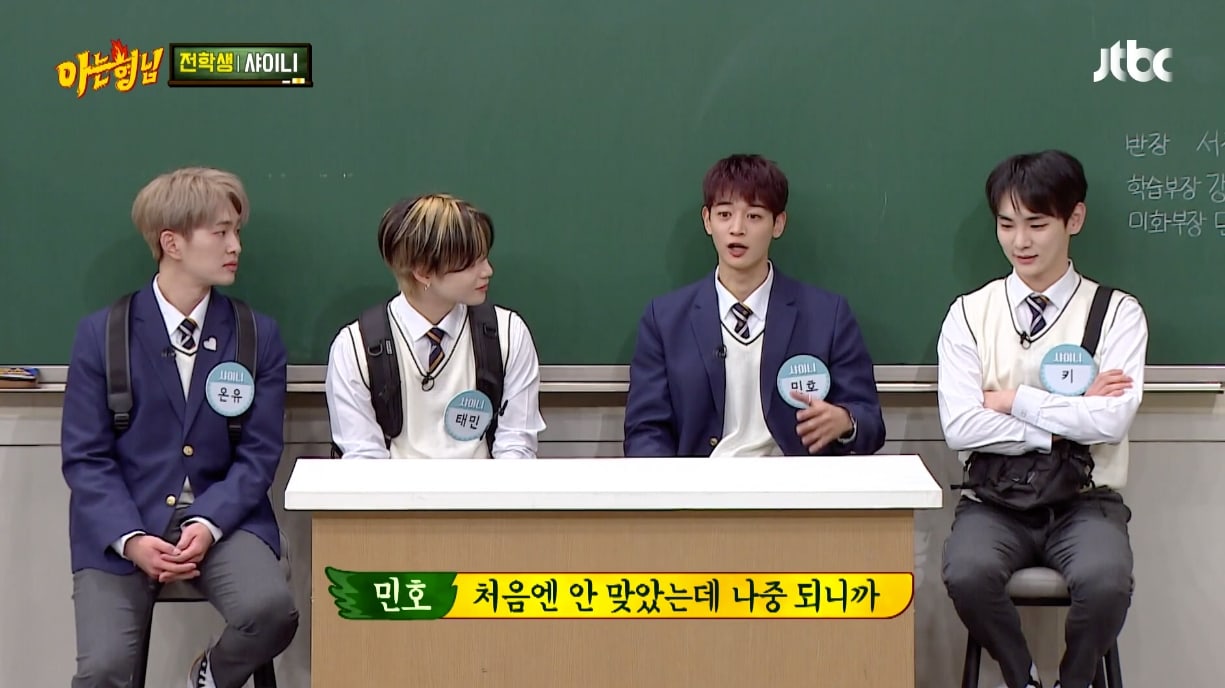 In 2019, AKMU’s Lee Chan Hyuk had appeared on “Ask Us Anything” following his discharge from the Marine Corps. Lee Chan Hyuk left a video message for his Marine Corps junior Minho, who was still serving in the army. In his message, Lee Chan Hyuk said, “You’re probably washing mops right now. Work hard.” Minho revealed, “I was really washing mops at the time. The other soldiers called me over to come watch the broadcast because they were talking about me. I was touched when he said, ‘Work hard.'” Although Minho enlisted later than Lee Chan Hyuk, he debuted earlier than him in the music industry. As a senior in the industry, Minho said in a video message for Lee Chan Hyuk, “I’ve been discharged, so let’s have a nice meal together! I’m the senior, so I’ll buy.”

SHINee then told a funny story of what happened because of Taemin’s activities as part of both SHINee and SuperM. Minho shared, “We shot our music video a while ago, and we made the ‘W’ sign with our fingers, which represents SHINee World (SHINee’s fan club). But suddenly, Taemin did it backwards, creating an ‘M’ for SuperM.” Key jokingly commented, “We sent him as a spy, but he gave his heart away to them.” Taemin explained that it was only a mistake. 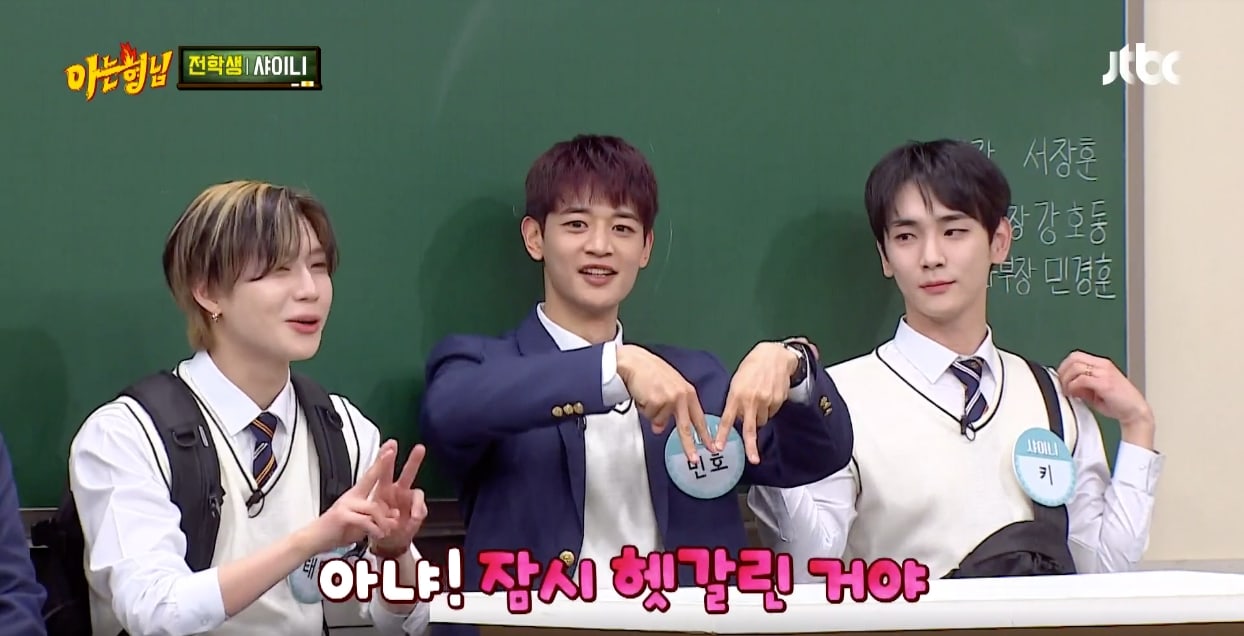 Minho and Key chose each other as the member they don’t click with. Minho explained that they have different styles, and Taemin added, “Strangely, they’re together all the time even though they’re always bickering. It’s a love-hate relationship.” 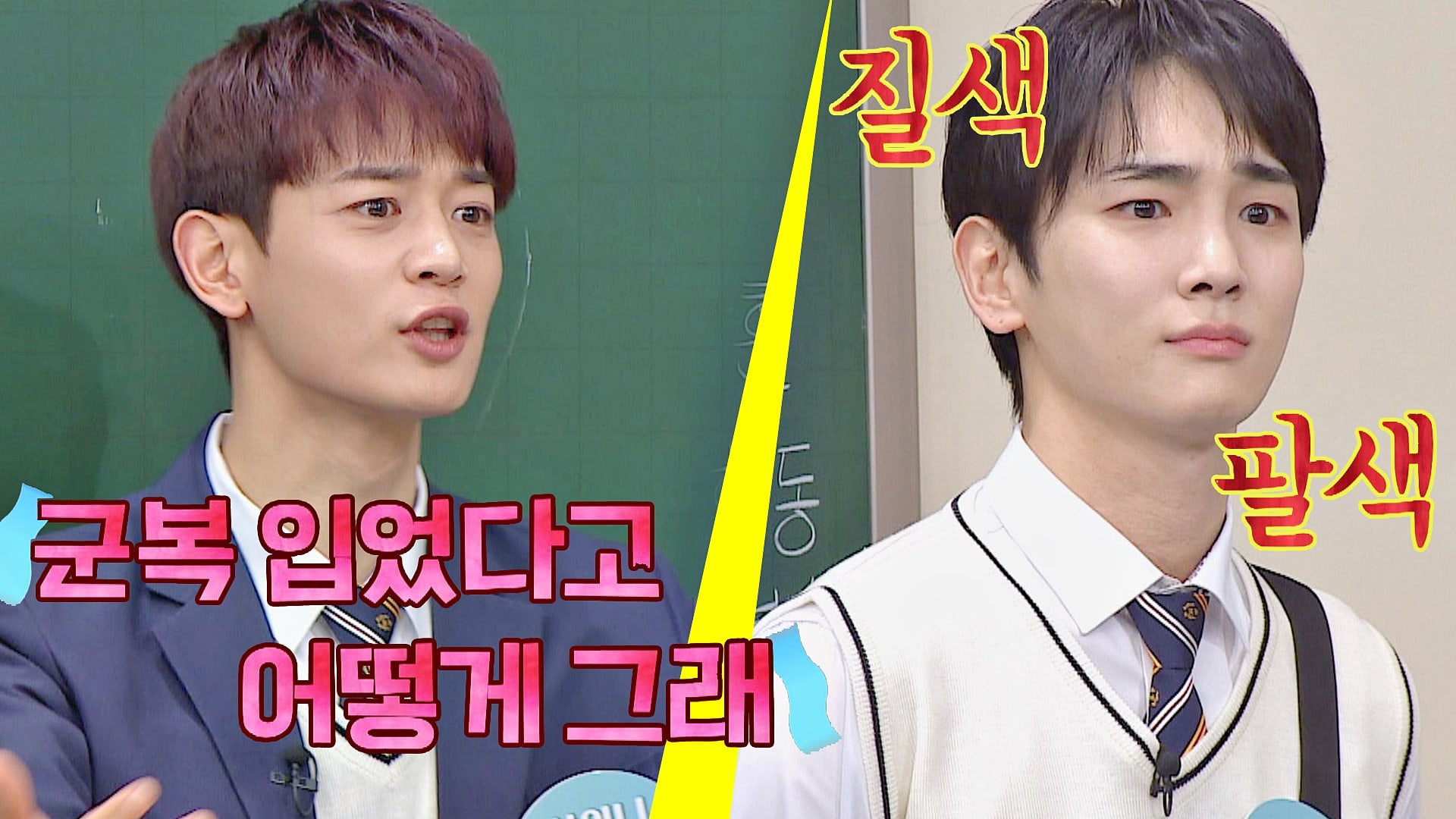 Minho expressed his disappointment with Key when Key ignored his messages about meeting up during their military breaks. Minho wanted to see him and kept messaging him, but Key, who didn’t want to hang out with Minho, didn’t respond back. Key explained, “After we’re discharged, we’d have to see each other all the time regardless of whether or not we like it. So I wanted to see my friends during my breaks.” Super Junior’s Kim Heechul commented, “Minho is like Choi Siwon, and Key is like me.”

Kim Heechul and Key then engaged in a battle of guessing girl group songs by hearing just the first second of the song. The “Ask Us Anything” cast told Key, who is a fixed member on tvN’s “Amazing Saturday,” to bring Shin Dong Yup as a guest if he lost. Kim Heechul ultimately came out victorious with his astonishing ability to guess songs.

Next, the SHINee members each gave a question that the “Ask Us Anything” members had to guess the answer to. Key asked about a certain thing he used to carry around not long after his debut, adding that his members probably knew the answer. However, Taemin kept answering incorrectly, making everyone laugh. 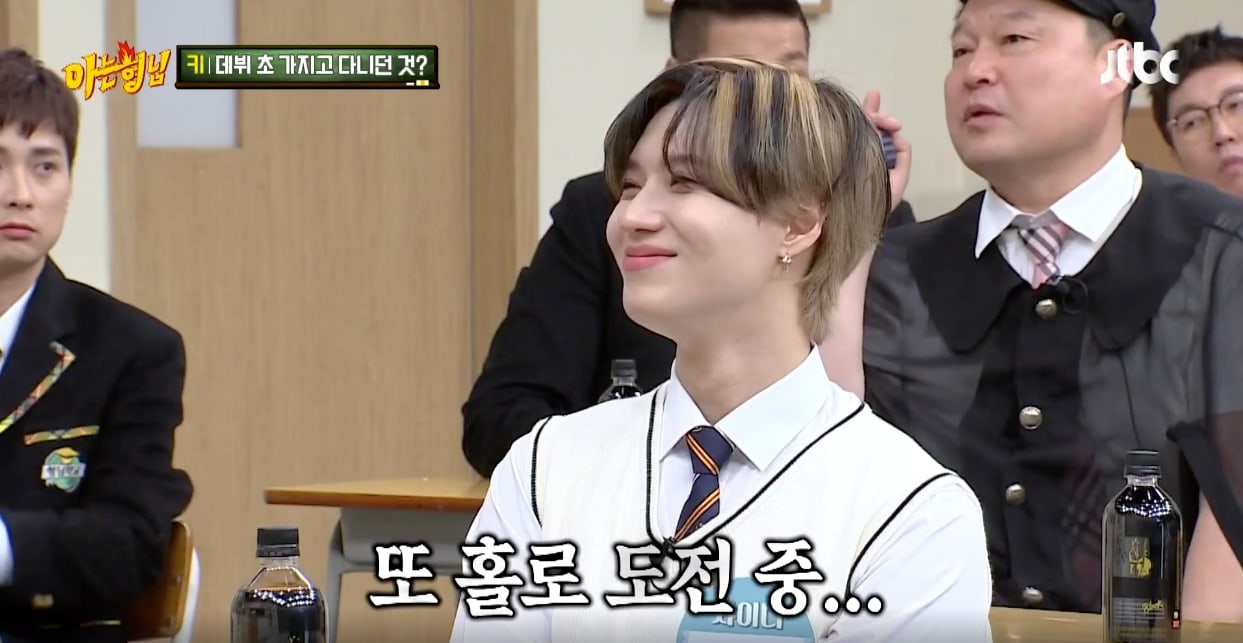 Min Kyung Hoon correctly guessed fatsia shoots and red chili-pepper paste, and Key explained that he carried them around to snack on because he missed his grandmother’s homemade food. Taemin then revealed that he had carried around lotus roots to help with his frequent nosebleeds, and Onew used to carry around raw beef with a gas burner in order to consume protein through freshly-cooked meat.

Onew’s question was about a time he experienced something very humiliating. The answer was that a reporter had blurred his face in a photo because they thought he wasn’t a celebrity. He explained that the photo was re-uploaded correctly after fans emailed the reporter about it. Key added, “I think he was shocked by the incident because he started studying how to dress well after that.” As a gift for guessing correctly, Onew gave everyone his handmade chocolate cookies, which everyone enjoyed.

Minho asked about the time he got the biggest goosebumps of his life, which turned out to be the time he had a centipede inside his sleeping bag while he was in the military.

SHINee is gearing up for their comeback with “Don’t Call Me” on February 22. Check out the teasers here!

Watch the full episode of “Ask Us Anything” below:

SHINee
Ask Us Anything
Kim Heechul
How does this article make you feel?