On the latest episode of “Running Man,” the members debated whether Kim Jong Kook would get married within the next three years!

During the February 21 broadcast of the SBS variety show, the “Running Man” cast played a game in which they were randomly assigned to one side of a debate. Then, after hearing the members discuss the topic at hand, the production staff voted on which team had made a more convincing case.

One of the questions was whether Kim Jong Kook would get married within the next three years, and since the question was about him, the staff gave Kim Jong Kook the option to choose which side of the debate he wanted to be on.

However, the singer turned down the offer, opting to pick his team randomly like the other members. He explained with a laugh, “I don’t know, either [whether I’ll get married or not].” 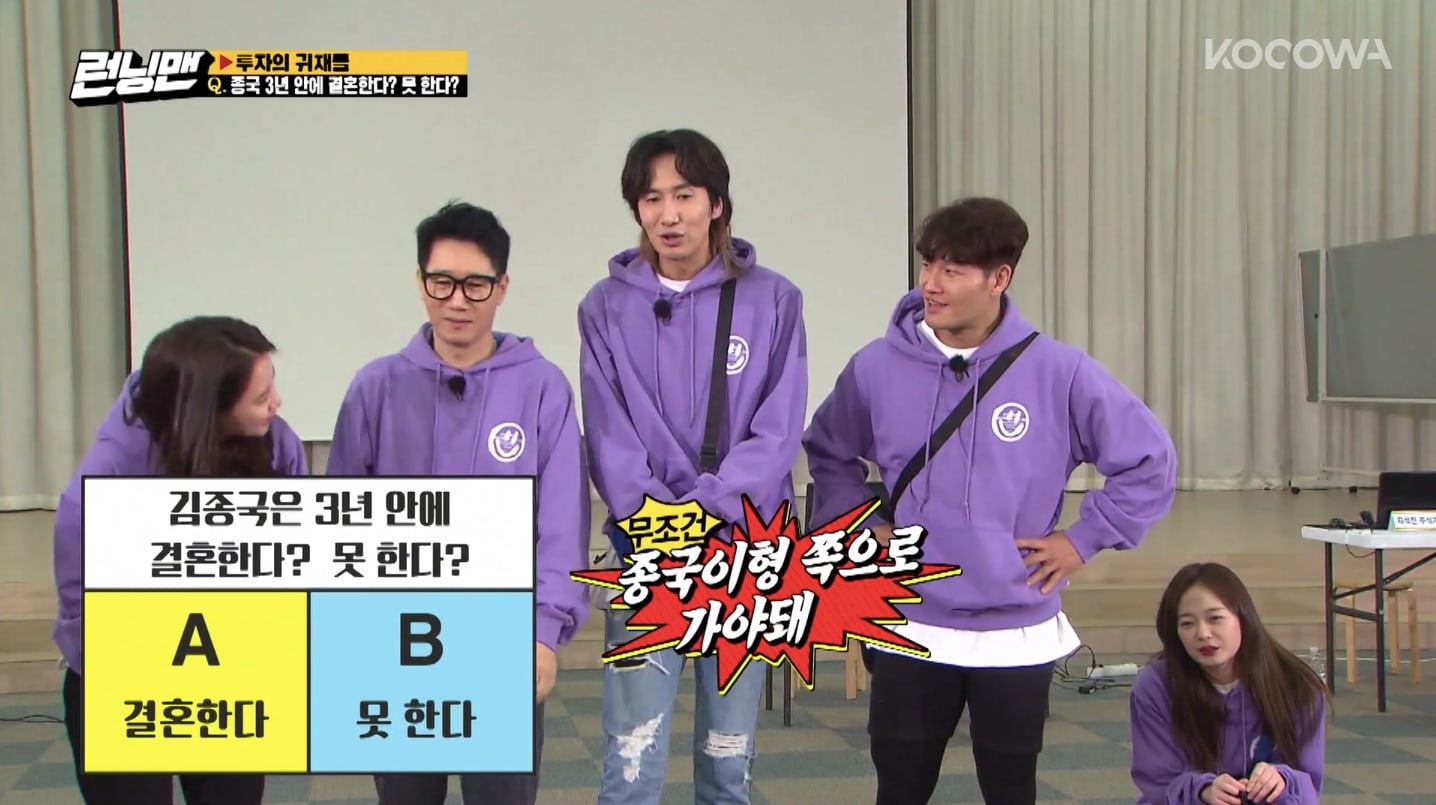 In keeping with his team’s position, Kim Jong Kook declared, “I’m going to [get married]. I should.” Yoo Jae Suk chimed in, “The question is whether Jong Kook will get married. What can anyone else say about the matter?”

Ji Suk Jin countered by pointing out, “To be precise, it’s not that Jong Kook is getting married, but that he plans to get married.” HaHa agreed, “He just wants to get married,” and Yang Se Chan added, “You can’t get married on your own.” Ji Suk Jin continued, “You need a woman to marry, but from what I know, Jong Kook’s daily routine doesn’t include any opportunities to meet women.”

Yoo Jae Suk argued, “But there are good women in Jong Kook’s vicinity. It’s just that Jong Kook himself holds back on actively taking those relationships to the next level.” Kim Jong Kook agreed, “I just haven’t made up my mind yet. But I need to get married within three years.”

Song Ji Hyo then shared her own insight into Kim Jong Kook’s dating style, remarking, “I don’t know if you all know this, but based on what I know, Jong Kook’s romantic relationships last for a long time. He dates people for a long time while debating, ‘Is this woman someone that I should marry?’ So three years is too short.”

Kim Jong Kook agreed with Song Ji Hyo’s observation, but added, “As a result of those experiences, though, I realized that if you date people for too long, it’s hard to get married. What I learned is that you need to just get married within two or three months.” 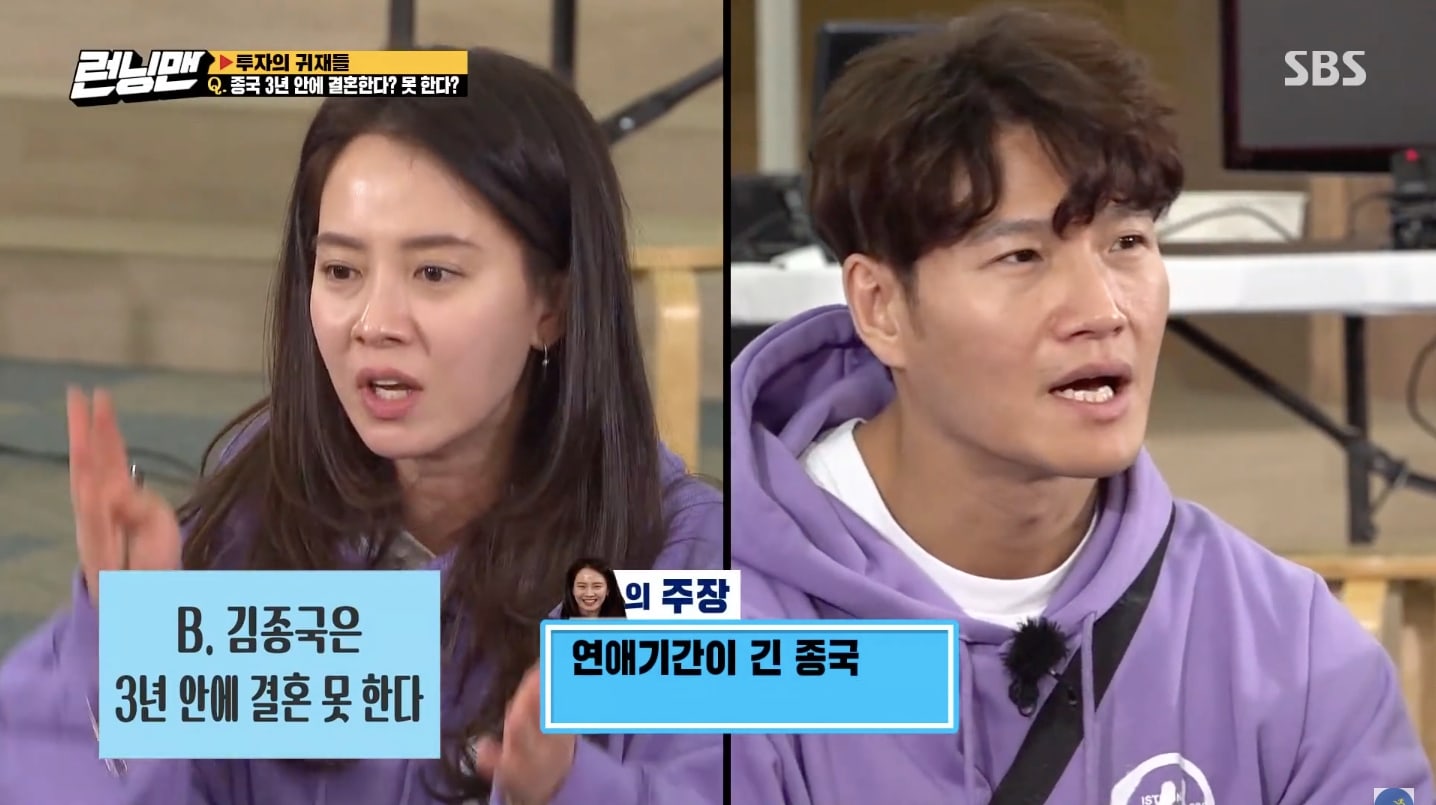 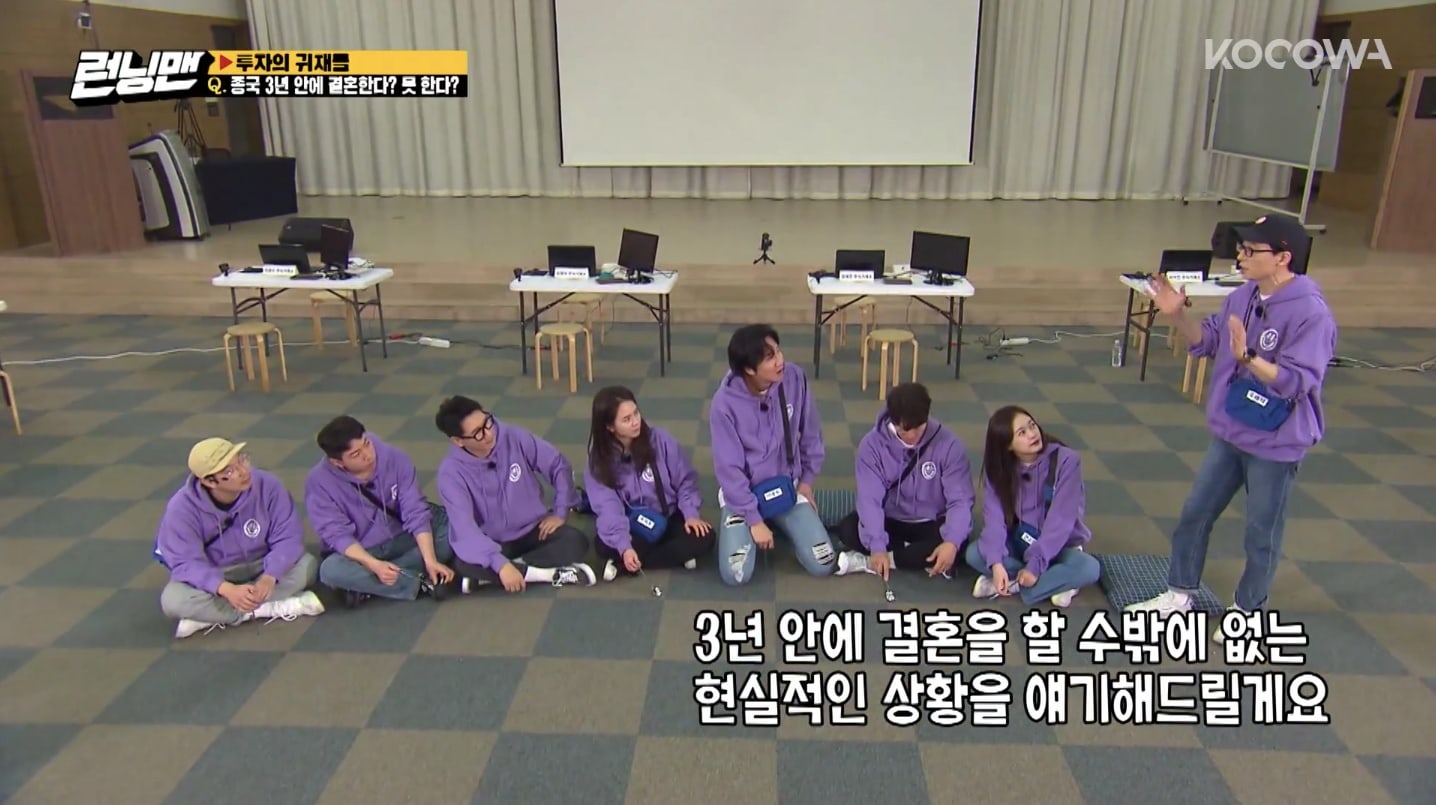 Later, Yoo Jae Suk asked Jun So Min to offer her own input, which led her to hilariously confess, “I shouldn’t think thoughts like this, but listening to this conversation, I think he might not be able to [get married].”

However, before she could finish, Kim Jong Kook cut her off by covering her mouth with his hand, and Yoo Jae Suk jokingly threw her off their team. 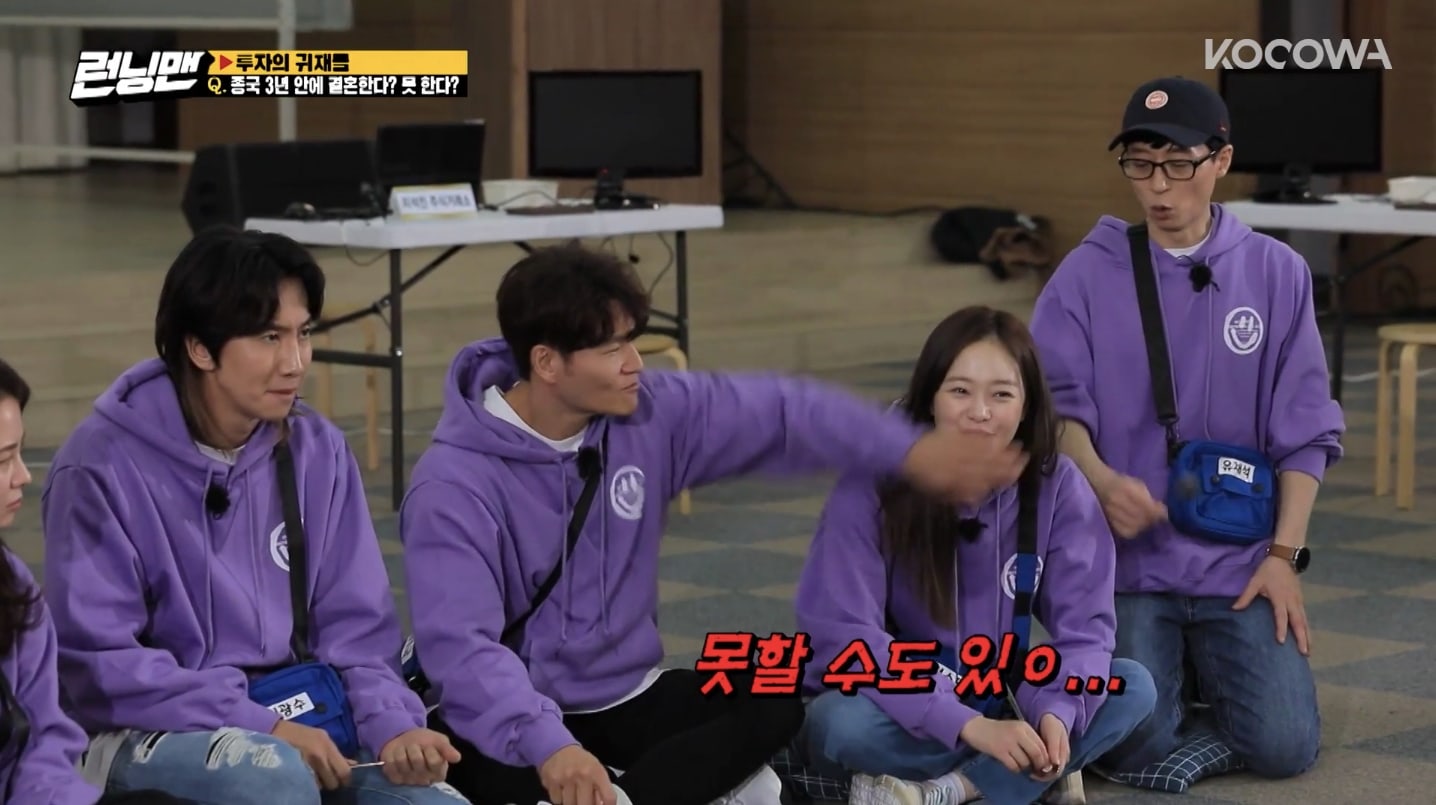 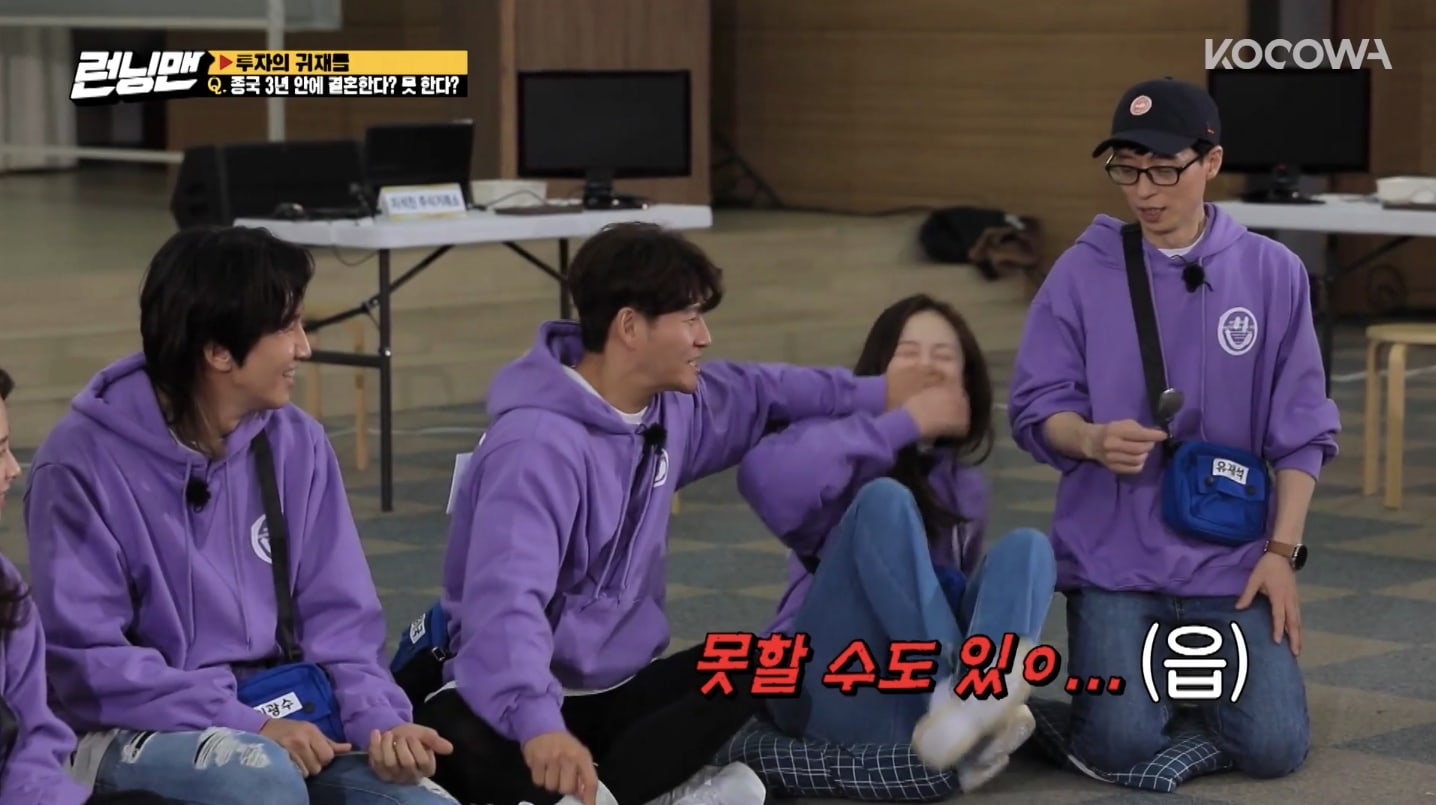 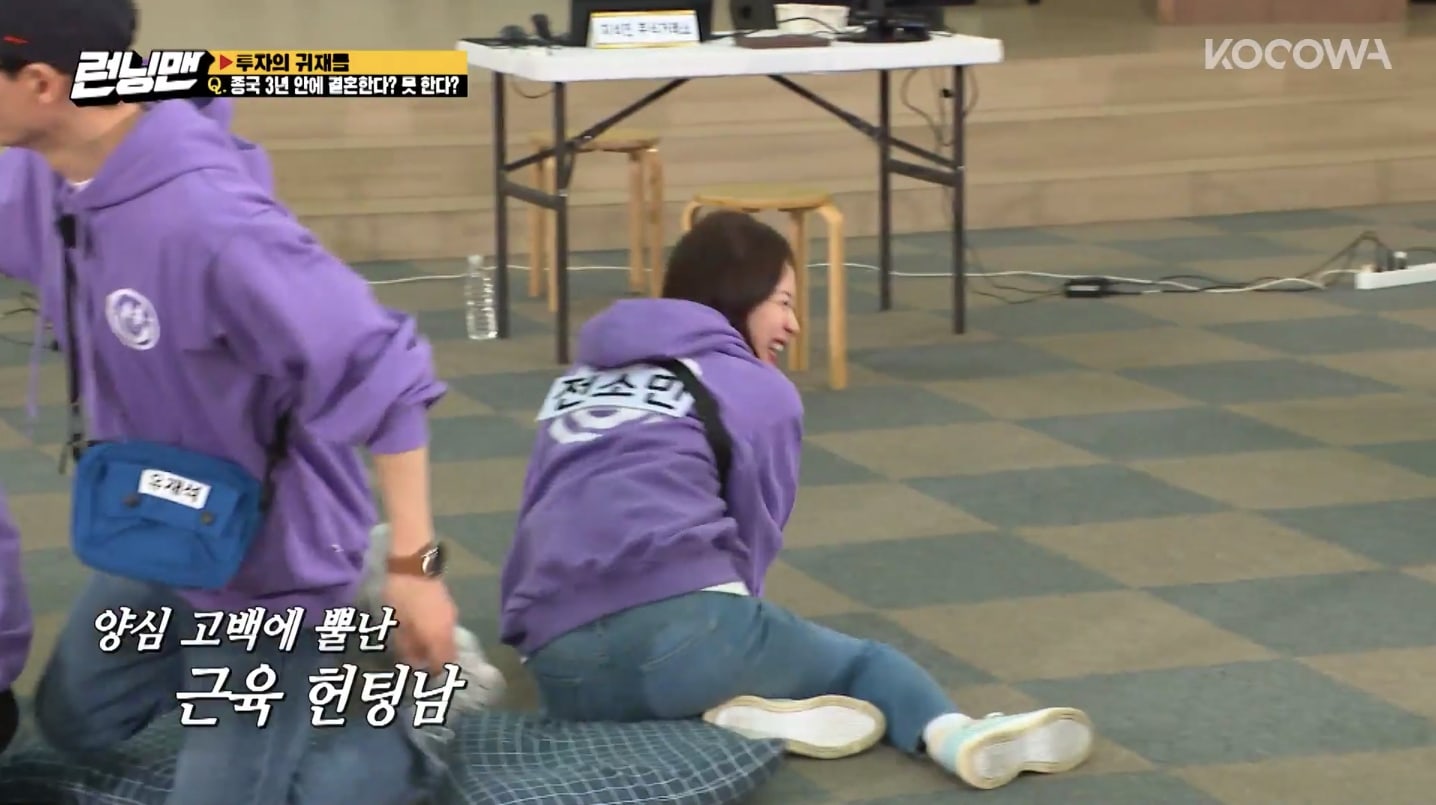 Once the debate was over, however, the team that had argued that Kim Jong Kook wouldn’t get married emphasized that they had only made that argument because of their assignment.

“Honestly, I think he will get married within three years,” said Ji Suk Jin, with Yang Se Chan chiming in, “Next year, even.”