On February 22, Chungha appeared on the KBS Joy show “Ask Us Anything Fortune Teller.”

On the show, Lee Soo Geun and Seo Jang Hoon asked her about her health, having seen the news about her COVID-19 diagnosis in December 2020. She said, “I’m good. I really had no symptoms. To be honest, I was first told that I tested negative and I went to sleep thinking, ‘That’s a relief.’ In the morning, my agency contacted me and I learned that I had tested positive around the same time as the news articles came out about my diagnosis.”

The show’s concept is that people come to the hosts to talk about the various concerns and problems in their life. Chungha shared, “There was a time when I fainted after promotion for ‘Gotta Go.’ I went to get examined and I learned that I was born with a smaller heart than other people. I was told that people with the condition suffer from chronic fatigue and weakness. I have weak eyes, so I tend to frown when I’m in strong light, and people have misunderstood me because of that. I did a photo shoot where I was in direct sunlight for a long time and I fainted and vomited afterward.”

She continued, “Last year, the release of my album kept getting pushed back, and it was pushed back even more because I tested positive for COVID-19. My album is coming out soon [‘Querencia‘ was released on February 15] and I don’t know if it’s because of that or something else, but I’ve only been able to sleep for two hours a night. I want to promote in good health and overcome feeling burdened.” 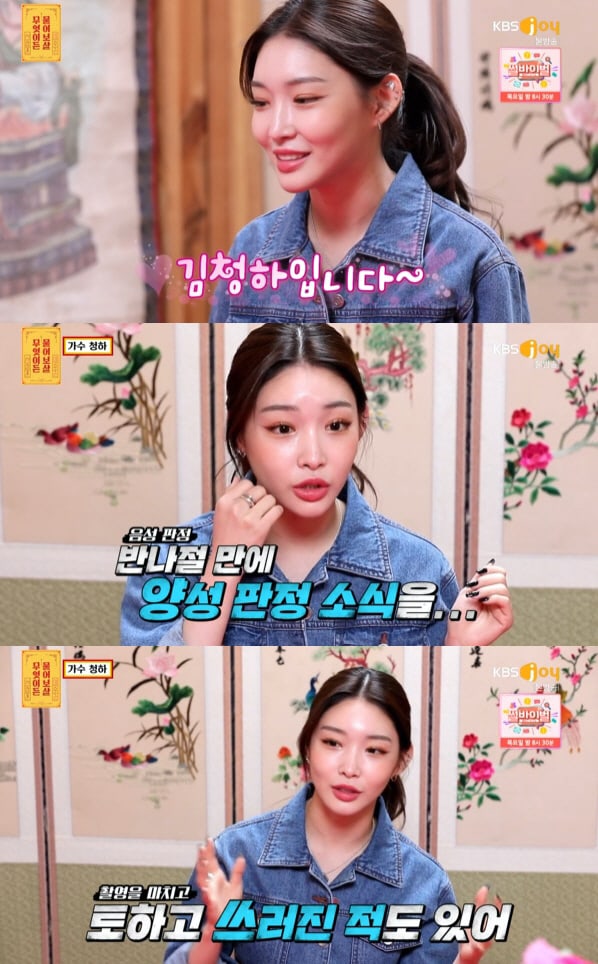 Chungha then described her intense work schedule. “I wake up around 8 a.m. and do remedial exercises,” she said. “I then repeat between practice and lessons until I stop work around dawn. Last year, I filmed about 10 music videos. There were no events and there were no opportunities to stand on stage with in-person audiences, so I thought that the best way to see fans was to release new songs and videos. That’s why I released so many tracks ahead of the new album. Now that the album is due to come out, I want to promote in better health, but I feel too anxious to give up the lessons.”

Lee Soo Geun and Seo Jang Hoon asked her why she feels the need to drive herself so hard. She replied, “I think that I have a strong sense of responsibility and put a lot of pressure on myself. This agency started with just me. There’s a new group that debuted, but as of now I still get more work. At the end of the year, a staff member thanked me and said, ‘I’m grateful that our company can keep working because of you.’ I was really grateful for her words. I thought I might take a break after releasing my first full-length album, but I keep worrying about whether the agency staff members will be negatively impacted if I stop working.”

Upon hearing that Chungha planned to work on another album after her current promotions, Seo Jang Hoon advised, “It will have a bigger negative impact [on your agency] if you overwork yourself and can’t promote for a long time. The most important thing is that you stay healthy. That’s why you have to take a break.”

Chungha said, “The saddest thing about this is that I was satisfied with this schedule and thought I could handle it. But when I went to the COVID-19 treatment center, and then had to self-isolate for a while, it was the first time I’d completely rested like that in five years. There were also issues with COVID-19 among the agency staff, and I realized that if my health wasn’t good, then nothing would work. I know that I have to stop this cycle, but now that the album is about to come out, I feel like I can’t stop.”

Lee Soo Geun and Seo Jang Hoon told her, “Don’t regret it later, but instead work hard at your current promotions and then rest as much as you want. It’s important to use your time effectively. You have to learn how to work when you need to work and properly rest when you need to rest in order to become a long-running singer and show your fans a good side of yourself.”