Chungha Talks About Her COVID Diagnosis + How I.O.I Members Helped Her Get Through Treatment

On February 23, Chungha appeared on tvN’s “On and Off” and gave us a glimpse of her everyday life.

During the episode, Chungha invited fellow I.O.I members DIA‘s Jung Chaeyeon and former gugudan member Mina to her house to spend time together. 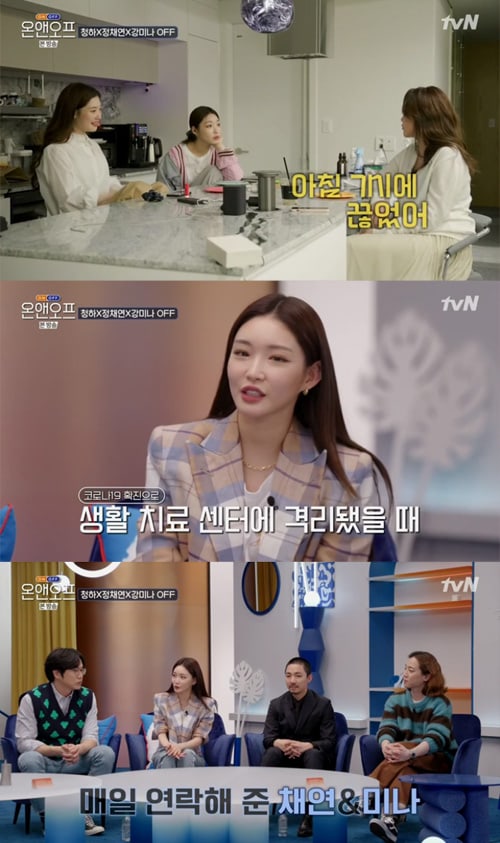 While enjoying a feast of ddukbokki (spicy rice cakes) and dessert, the three started an adorable competition on how long they had been on the phone with one another. When Chungha asked Mina if she had ever gone over four or five hours of being on the phone with Chaeyeon, Mina replied, “Unni, that’s nothing. We stayed up all night talking on the phone.”

When Uhm Jung Hwa asked if she wasn’t sad that the group had disbanded, Chungha responded, “I don’t think that we disbanded. I rather think that we’re just taking a break.”

Their friendship was further highlighted when Chungha mentioned that the two reached out to her every day while she was in the treatment center for COVID-19, staying on the phone with her for hours. She went on to express her gratitude for the support.

The artist opened up more about her thoughts on her COVID diagnosis when a therapist visited her at home earlier in the day. The therapist asked her, “Wasn’t last year tough on you, both physically and mentally?”

Chungha responded, “The first time a diagnosis article was written about a celebrity was about me. It felt like it was my fault because they went to these events for me. If I wasn’t a public figure, and if the news weren’t made public, it would have been less tough. But it negatively affected the people around me so I was sad.” She added, “So I prayed a lot. I was so worried but luckily in my circle, it ended with me. I wanted myself to be the last celebrity [diagnosed]. Because there are too many links.”

Like the true trooper she is, she also stated, “But there were also things to be grateful for, other than the biggest con that I couldn’t go on stage. While going through this unwanted period of rest, I actually made a lot of realizations. It’s a time that made me think, ‘There’s this side to me too,’ and ‘I have these preferences.'”

As for why she started therapy, Chungha explained, “You can take medicine, but I wanted to know my true nature, so I have been receiving therapy for about a year. It’s gotten much better.”

Chungha
On and Off
How does this article make you feel?