TXT Shares Interpretations Of Their Group Name, How They’ve Grown Since Debuting, And More

In the latest issue of Vogue Korea, the members of TXT are featured in a mesmerizing photo shoot and a thorough interview discussing the meaning of their group name, their growth, and more.

TXT, which stands for Tomorrow X Together, means “different people coming together under one dream in hopes of building a better tomorrow.” The interviewer asked each member what this “one dream” refers to, and Taehyun answered, “I think the greatest dream is healthily promoting music so that at least one more person can relate to our songs and feel comforted. We’re close to the start right now. I want to leave more potential. If that dream is 100, I think we’re at about a 3. I think it’s better that we have 97 percent of potential.”

Taehyun also spoke about the group’s second debut anniversary, which is coming up on March 4. He commented, “Everyone wants to succeed faster and be in a better position but I don’t want to rush. I think that if my members feel pressured while promoting, they won’t be happy and that’ll be a problem. I think we’ve gotten here at a pace where the members can feel happy.” 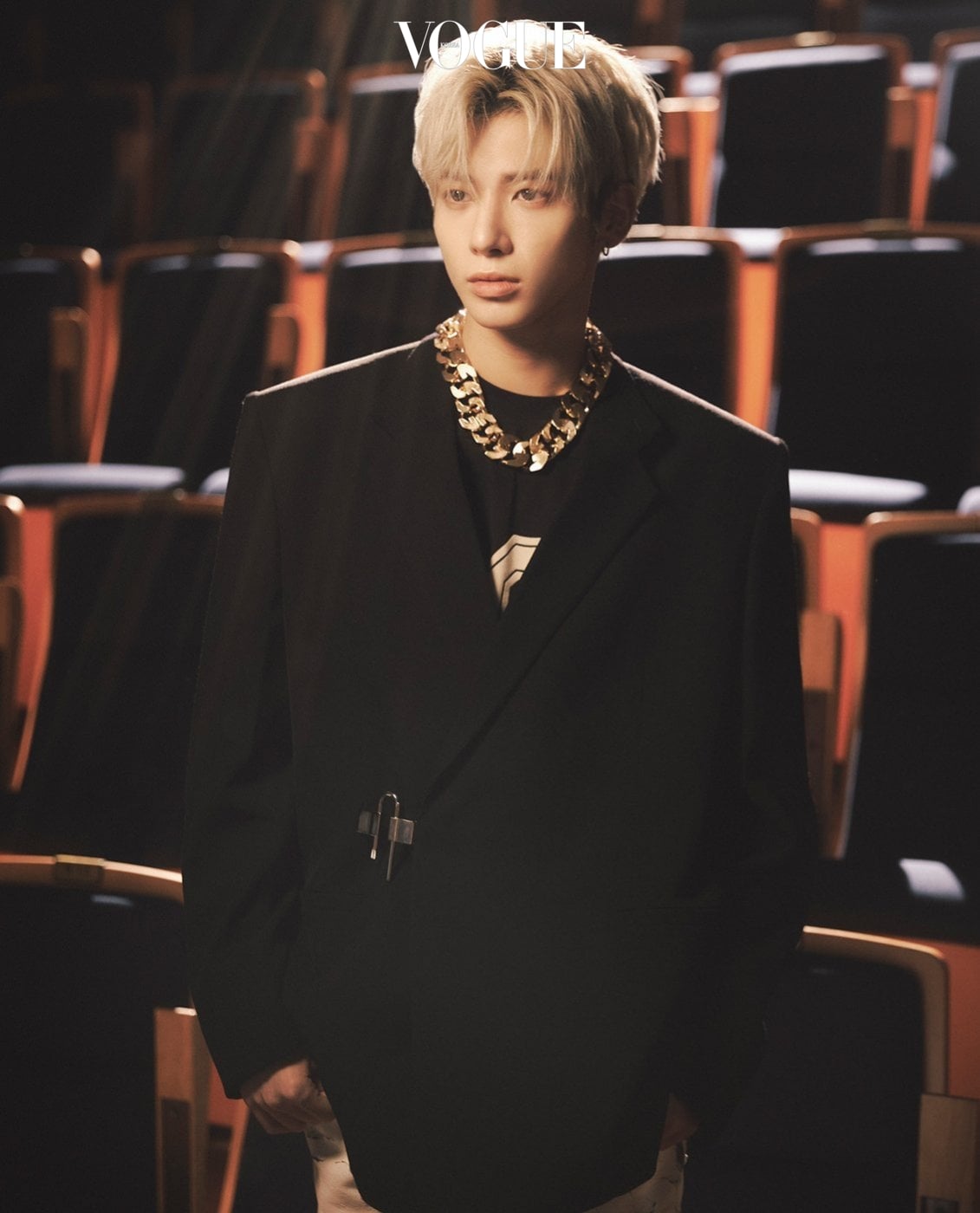 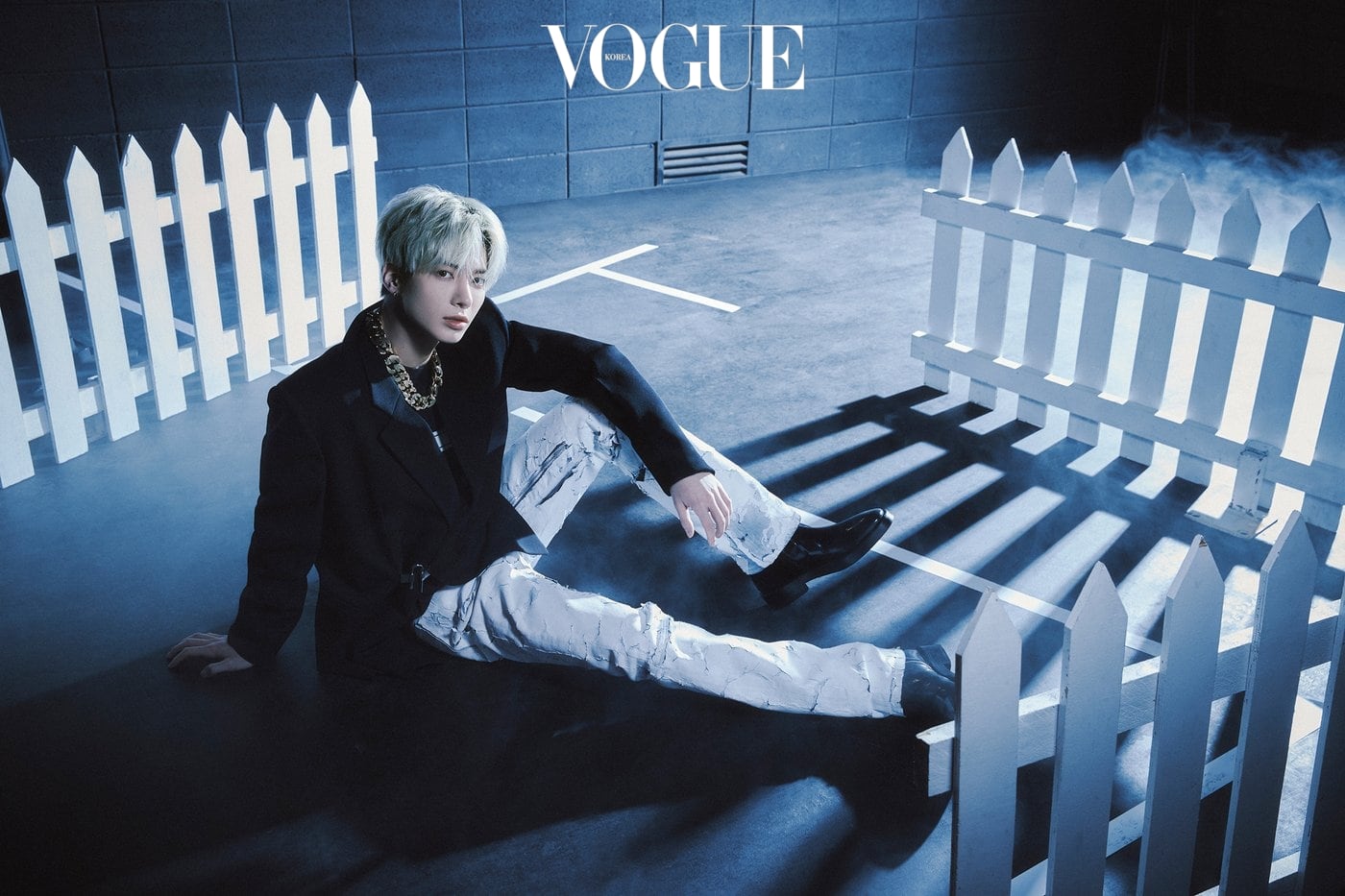 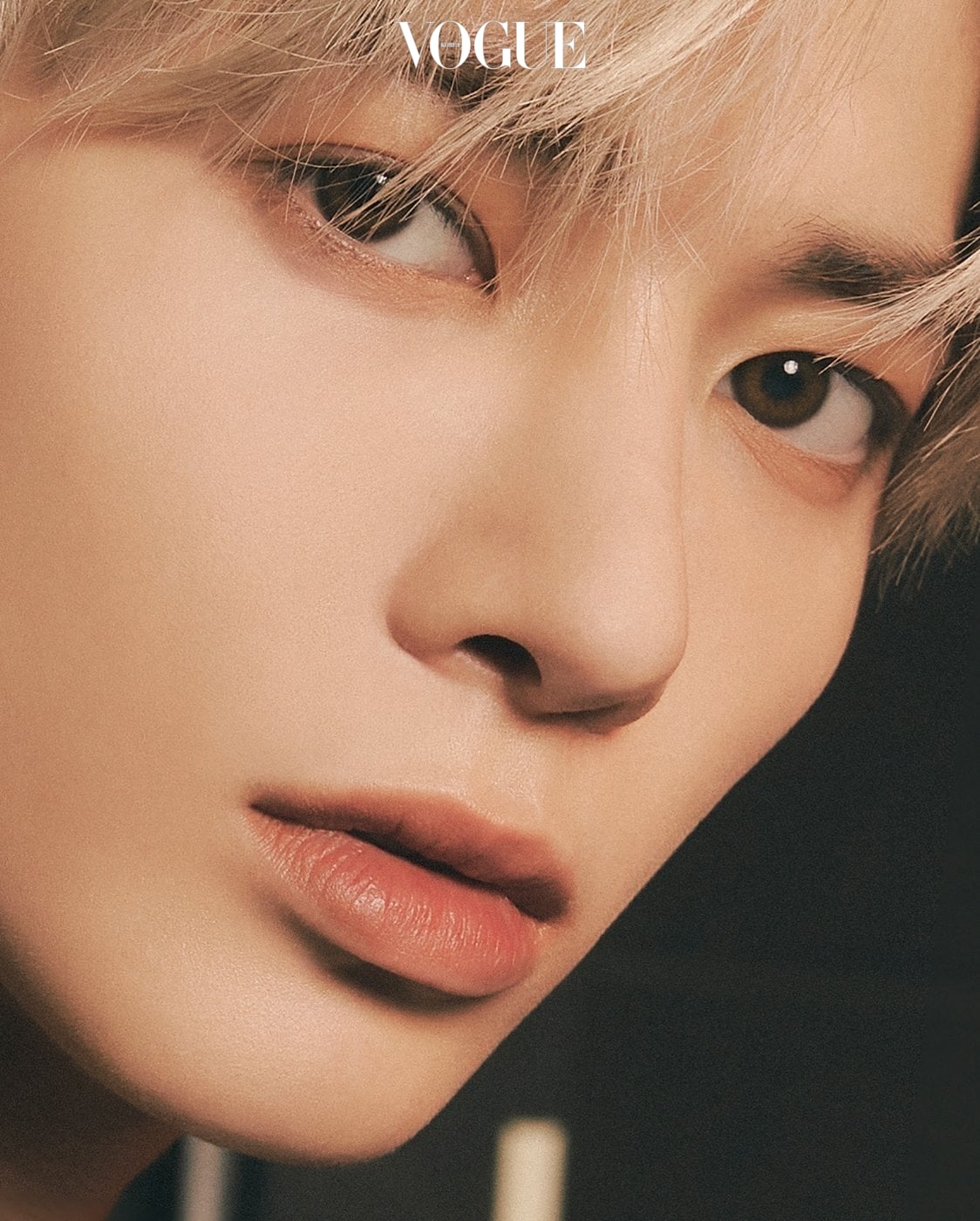 For his interpretation of their “one dream,” Yeonjun shared, “My dream is for many people to become happy through our songs or performances. I felt this during our last comeback show and I feel it while communicating on Weverse, but there are people whose minds or bodies are hurt. What they always say to us is, ‘I’ve been keeping strong and enduring while listening.’ There’s nothing that makes me feel more proud.”

Yeonjun also discussed his bold sense of fashion and a type of style he’d like to try out next. He picked skirts, explaining, “Recently, I saw actor Bong Tae Gyu wear a skirt and thought it was so cool. His mindset was so cool too. He’s right. He’s asking who decided that this was women’s clothing and that was men’s.” 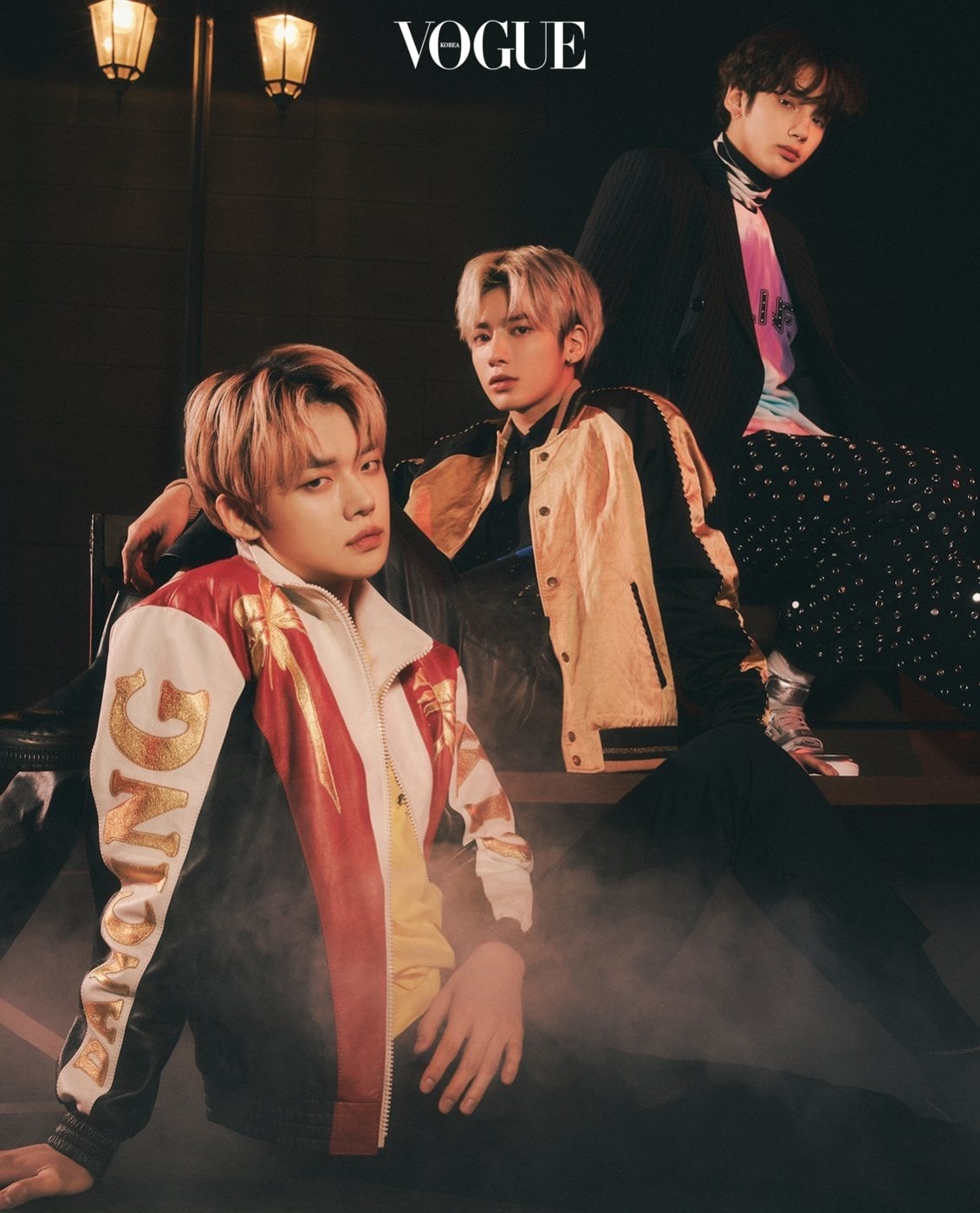 The interviewer mentioned the group’s recent popular cover of SHINee‘s “Sherlock” and Yeonjun responded, “I used to be bad at dancing. I was really so bad. It was to the point where I was the worst at my academy. However, I hated losing to others and being a nuisance so I practiced really hard. If my teacher taught me one thing, I would keep going at it after class, filming it. I would check what was weird or lacking and receive feedback. That’s how I improved.” 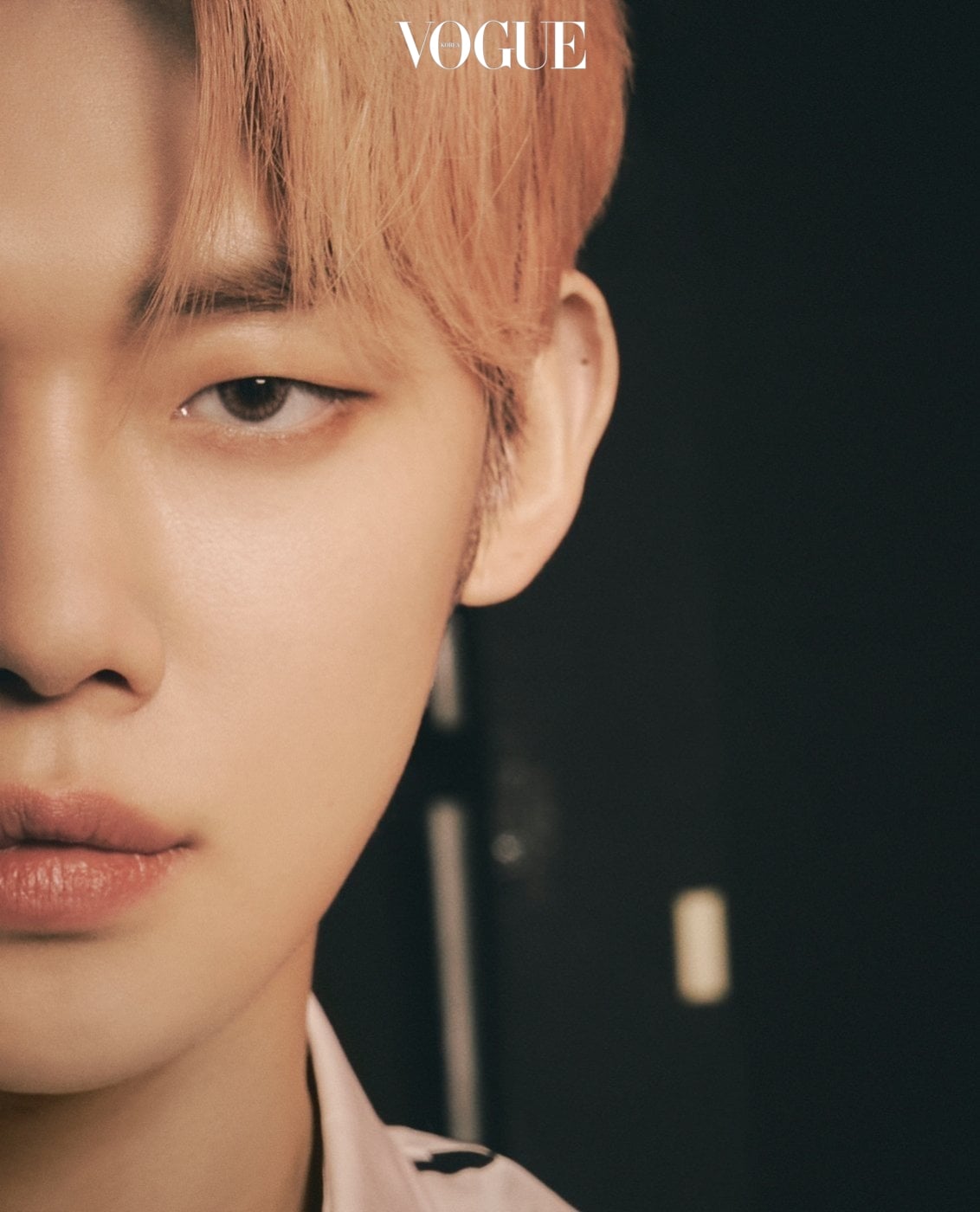 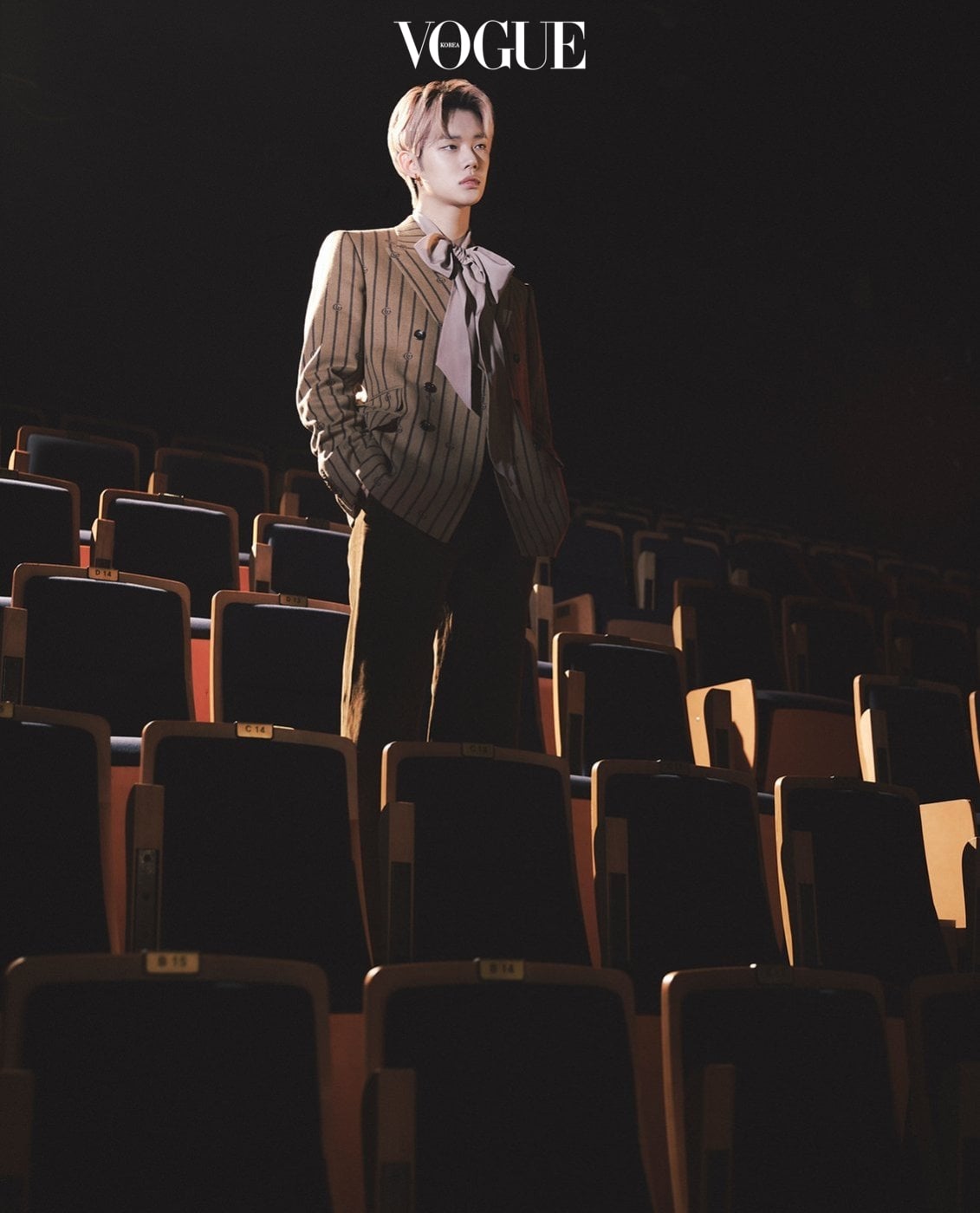 Soobin picked individual happiness as his main “one dream,” followed by the members all enjoyably promoting as singers for a long time. He elaborated, “Regardless of the results, I think we just need to be happy and enjoy ourselves. When we first debuted, I’d constantly watch our music videos so the views would go up and would purposely search our songs, but now I don’t pay attention to the results.”

Soobin also shared the pros and cons of his work that he’s discovered overtime. He explained, “This is a concern that I confessed to Yeonjun. I really thought that I didn’t have any charms so I questioned, ‘Is there something about me that other people would like? Who would like me? Can I debut like this?’ However, after my debut, many people liked me. After debuting, my self-esteem went up a lot.”

Laughing, he continued, “I didn’t want to talk about anything related to my physical appearance. I guess you could say my nose looks a bit hazy. But my fans even liked this nose of mine. I was thankful that they were changing my complexes into positives. Also, this is a bit embarrassing to say myself, but I used to think of myself as someone who was mature with a tough mentality. However, after debuting, I realized I was young and inexperienced.” 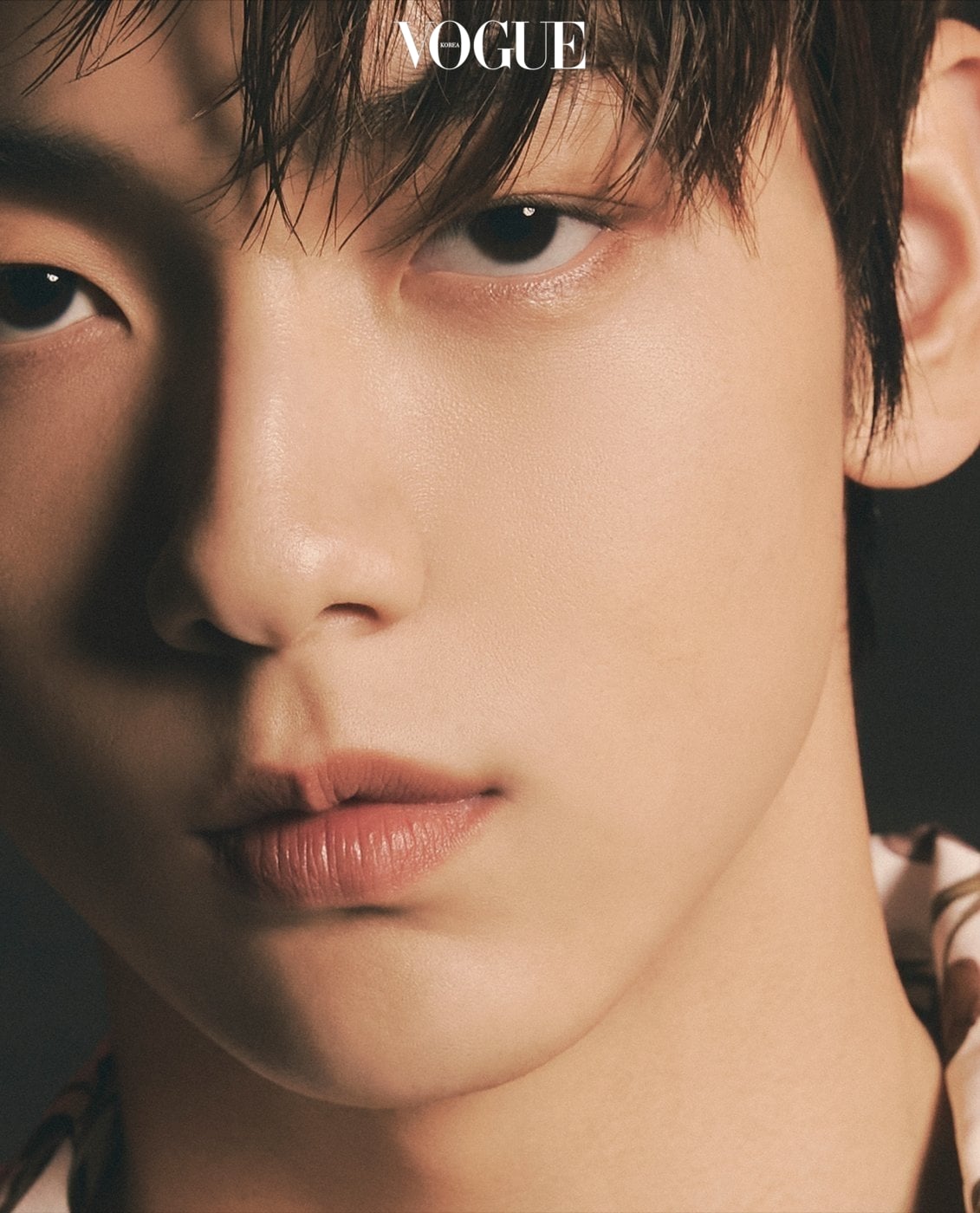 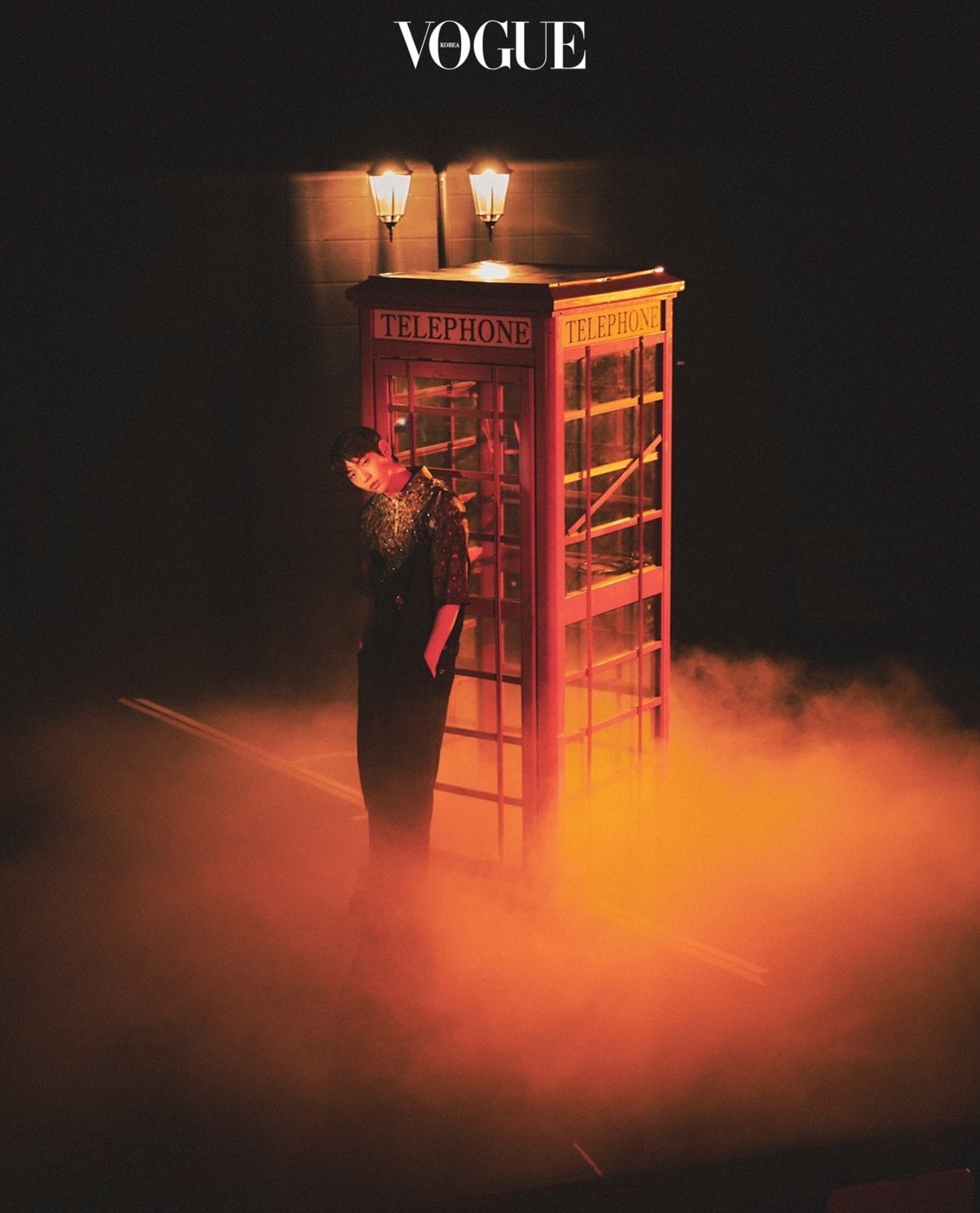 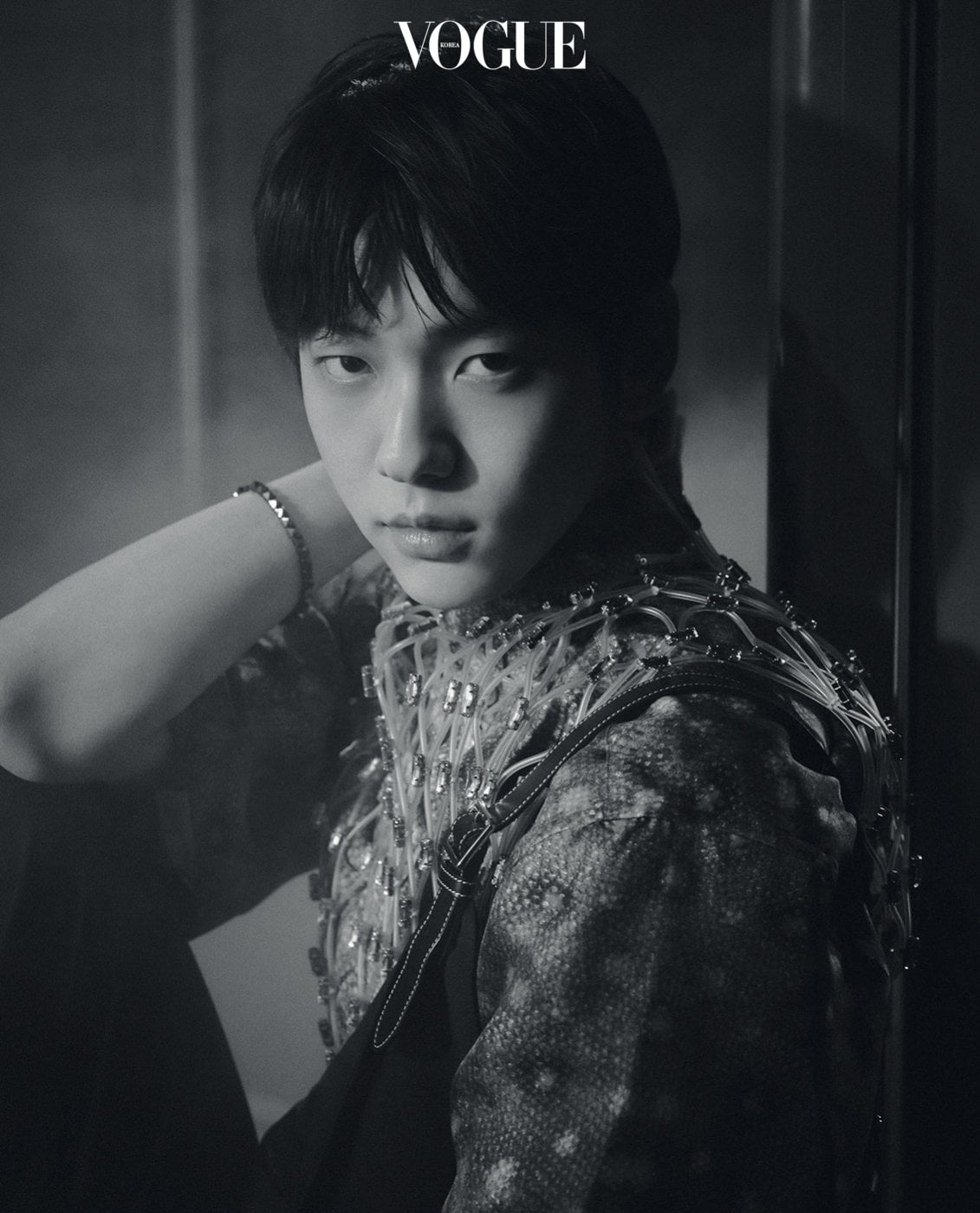 When asked the same question about their group name, Beomgyu answered, “When I was a trainee, my dream was debuting. The reason I thought we all fit with the team of TXT was that we all have strong and unique individuality. But because of that, when the five of us first met, we didn’t mesh at all, because people different than us were insisting that they were right. For our one dream of debuting, we all had to begin compromising and matching one another.”

He added, “Now, I think we’re expanding the scope of that dream. It’s like our dream has become concrete. Someone’s dream might be becoming like their role model, and another person’s might be songwriting. We all have one dream like that, that we’re chasing. I have ambition for songwriting.”

Beomgyu expanded on his desire to write songs, sharing, “It’s because I can express myself. To be honest, saying you’re having a hard time is difficult to do. However, you can express that through a song.” He added, “I only write when I’m going through a tough time. I seek it out during these times because I need a way to express myself.” 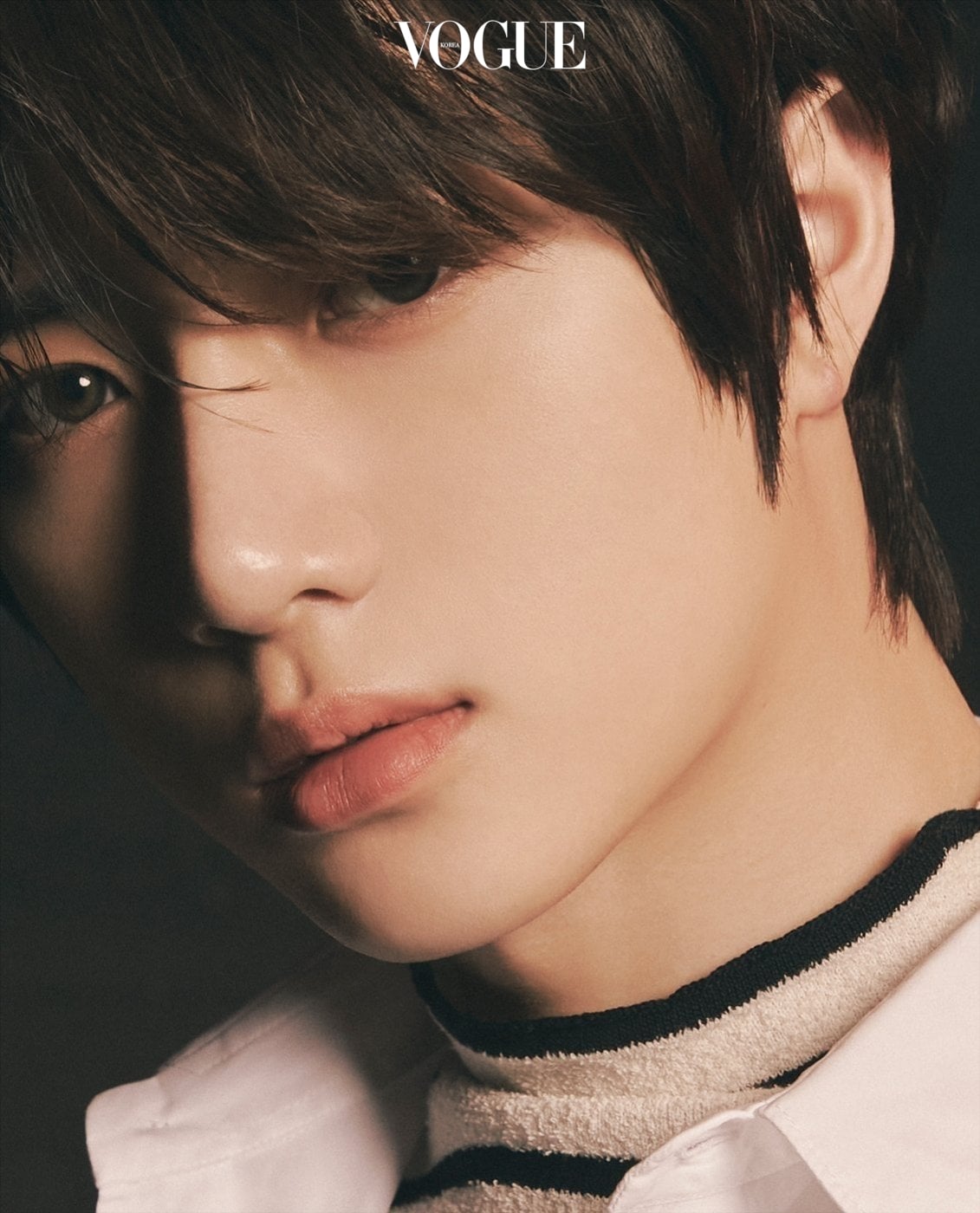 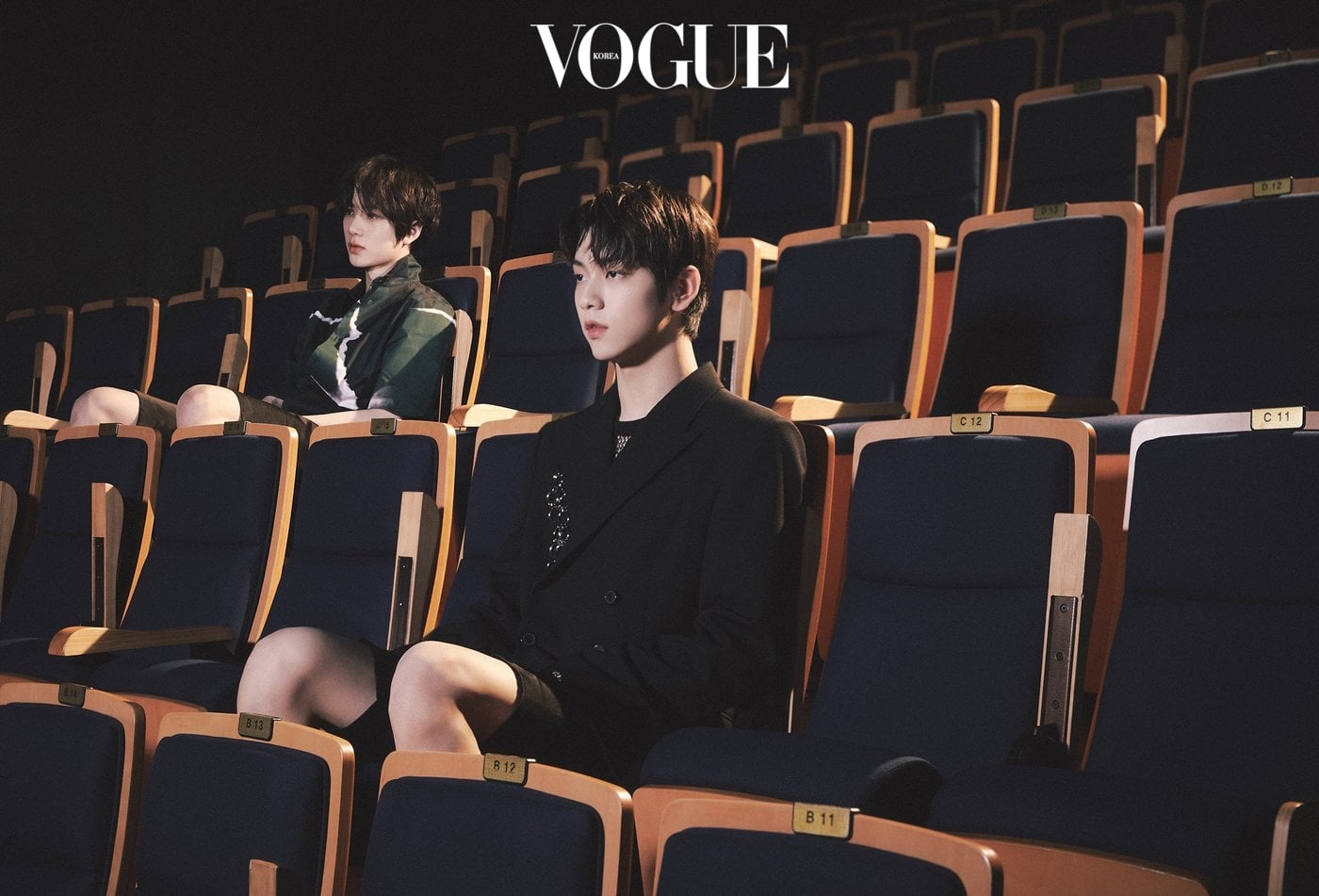 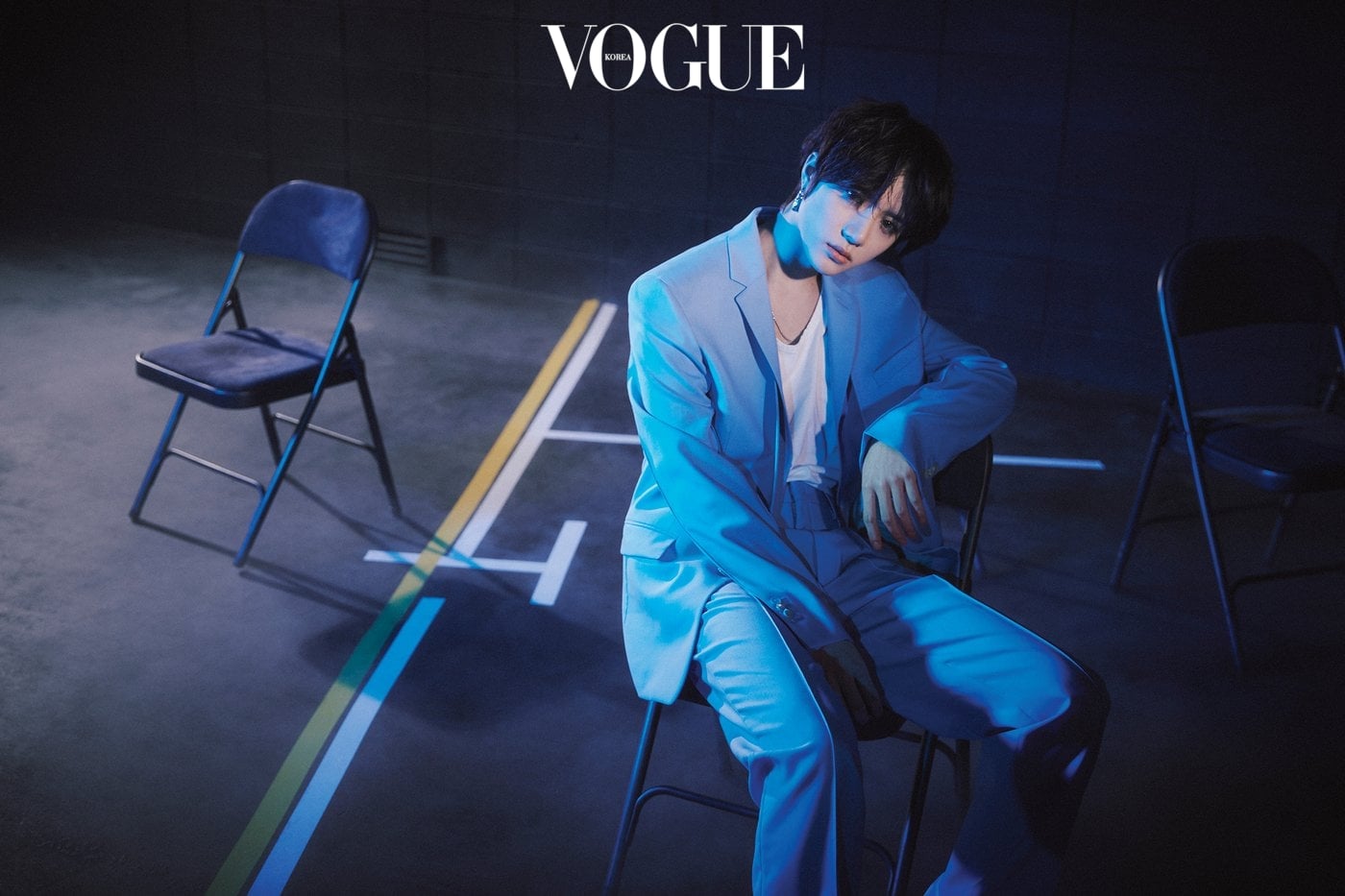 Lastly, Huening Kai shared his “one dream” to be “becoming an artist who lasts forever in people’s memories.” He added, “I want to move people’s hearts through music.”

As intricate and detailed as TXT’s unique universe is, it is equally as confusing at times. Huening Kai picked “Can’t You See Me?” as the song he found most difficult to understand, explaining, “At first, the vibe is dark so I thought, ‘What kind of song is this?’ When we filmed the music video, I had just understood the concept. I realized it connected to ‘Crown‘ and ‘Run Away.’ After experiencing growing pains, they ventured into a period of happiness, but realized they were faced with a wall. That wall was adulthood. They have to move forward but that’s hard and frustrating. I interpreted it as being afraid to climb the wall.”

Huening Kai also gave reasons why he might fall for each of his members if he was a fan. He shared, “Although Beomgyu has looks that appear straight out of a cartoon, he has an unexpected charm. He’s calm when he’s calm and extremely loud when he’s loud. I think that’s what’d make me fall for him. Soobin is fooled easily. He’s naïve and the key point is that he lives under a rock. I acted like I hurt my leg and he fell for it.”

He continued, “Taehyun has a wise side but is really emotional at times, which is cute. His key point is that he sometimes acts shy. Yeonjun is weak for compliments. If you keep making fun of him and then compliment him, he’ll get shy and crack.” 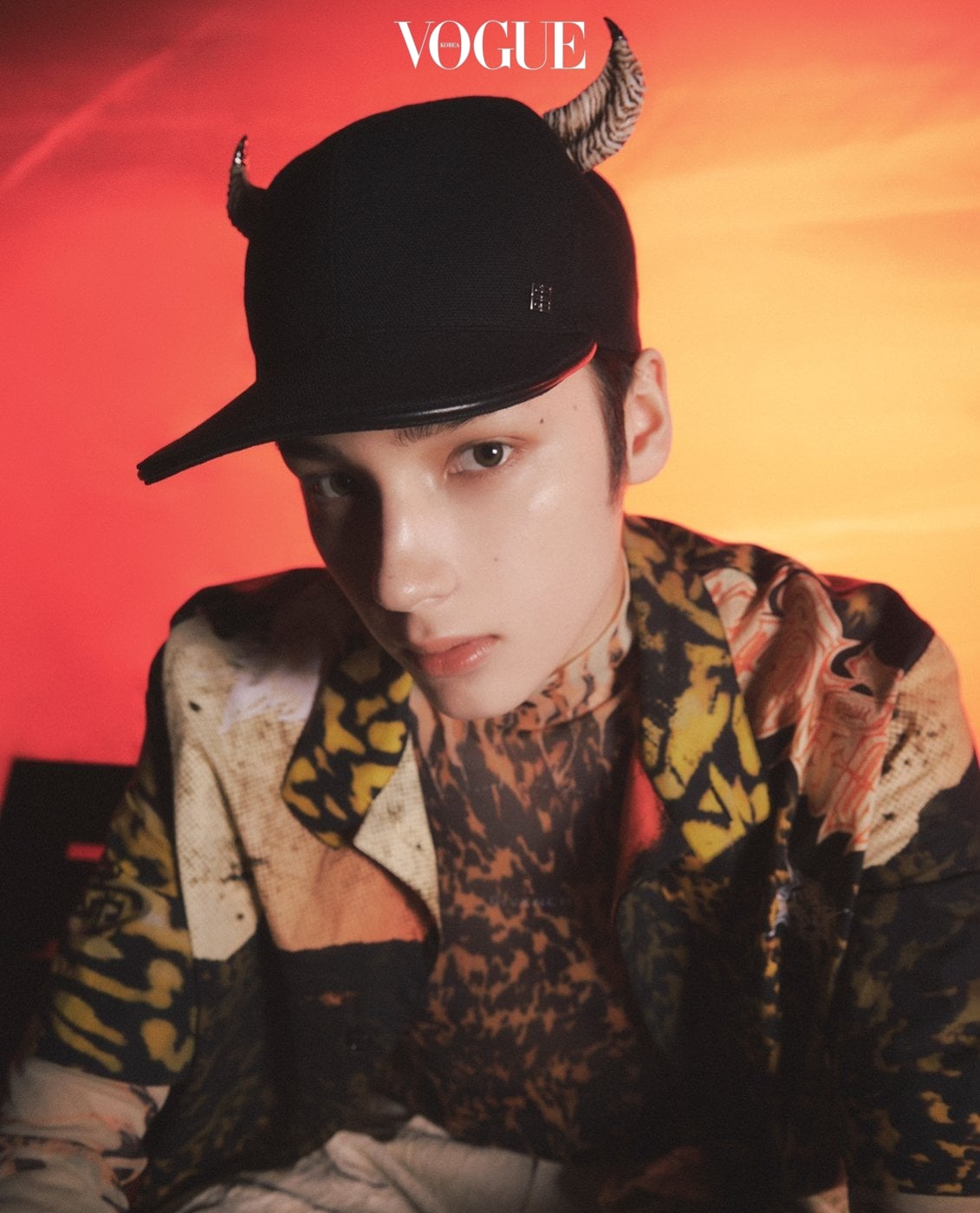 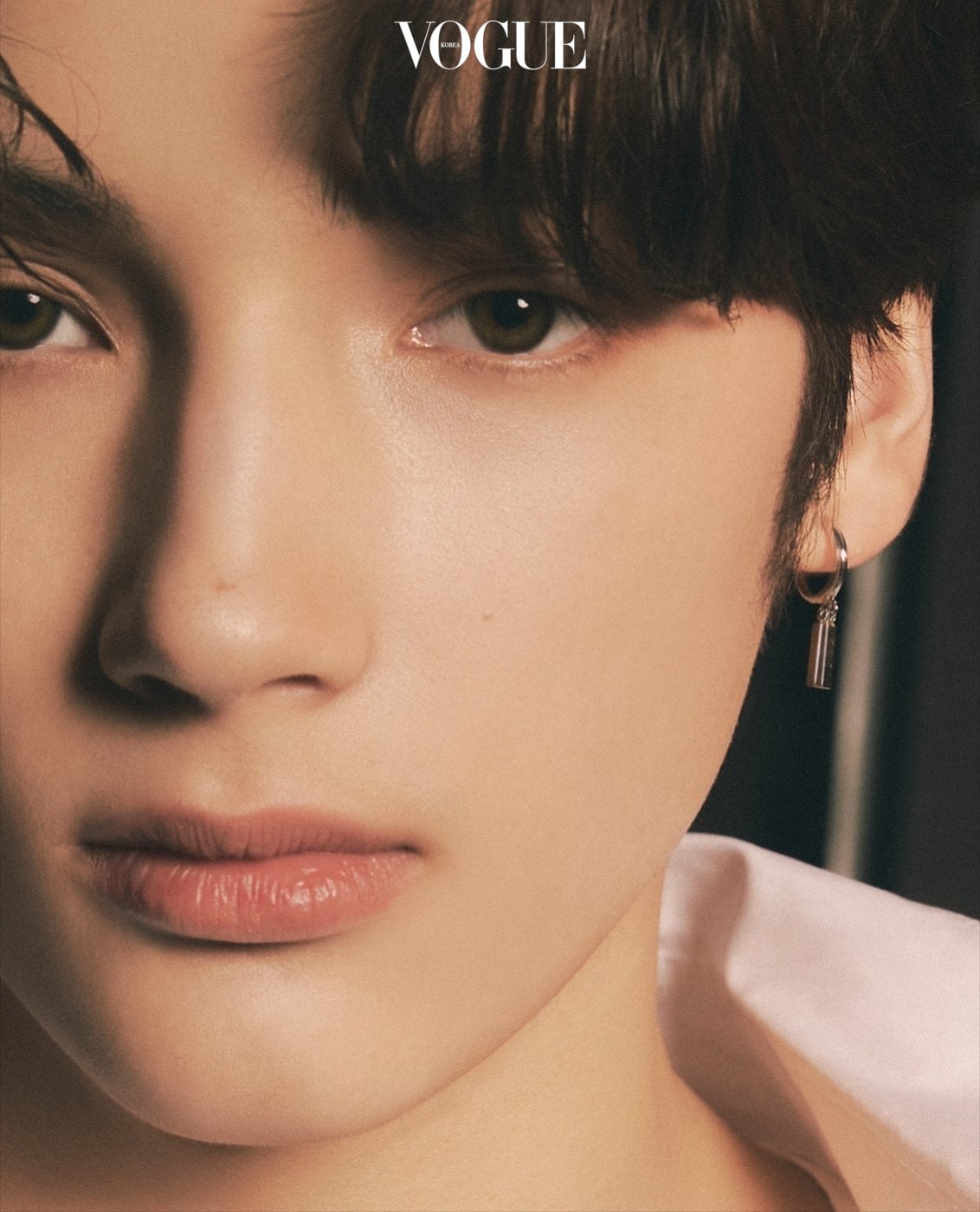 Vogue
TXT
How does this article make you feel?