The chart resurgence of Brave Girls’ “Rollin'” has taken the song all the way to the top!

A perfect all-kill is given to songs that are No. 1 on the daily and 24Hits charts of Melon, daily and realtime charts of Genie and Bugs, VIBE’s daily chart, FLO’s realtime chart, and iChart’s own realtime and weekly charts. 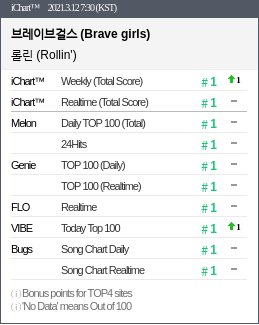 Brave Girls’ “Rollin'” began to see a resurgence on the charts after an edited compilation video of the group’s performances of the song went viral. Since then, Brave Girls have performed the song again on music shows and are set to make appearances on popular variety shows like “Running Man” and “You Quiz on the Block.”

Not only is this Brave Girls’ first perfect all-kill since their debut, it is also just the second perfect all-kill to have been achieved in 2021 thus far. (The first was IU’s “Celebrity” in January.)