The Cast Of “Love (Ft. Marriage And Divorce)” Says Goodbye To 1st Season With Final Remarks

Ahead of the final episode of its first season, the cast of TV Chosun’s “Love (ft. Marriage and Divorce)” shared their closing comments!

“Love (ft. Marriage and Divorce)” is a drama that follows the marital troubles of three couples who are at different stages in their lives. The drama has broken records since its premiere, which set a new record for the highest viewership ratings ever achieved by any drama in TV Chosun history. It then subsequently broke that record with its second and fifth episodes, maintaining strong viewership ratings throughout its run. 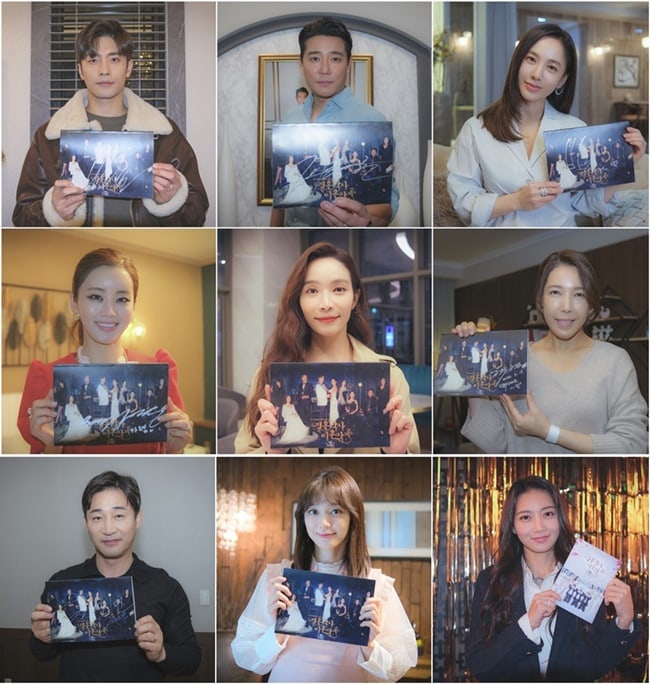 Sung Hoon, who starred as the hotshot lawyer Pan Sa Hyun, expressed his gratitude for the viewers as he shared, “I still can’t believe we’ve reached the end. I hope everyone will send lots of love up until the last episode. I’ll wait for the day when we meet again.”

In the role of hospital chairman Shin Yoo Shin was Lee Tae Gon, who commented, “We’ve finished filming safely and met everyone with the sixteenth episode. There will be plenty of interesting things that happen in the final episode. Thank you to everyone who showed their love for Shin Yoo Shin.”

Park Joo Mi took on the role of Sa Pi Young, Shin Yoo Shin’s wife and the producing director of a radio show. The actress shared her thanks for the staff and viewers as she said, “The past four months as the charming character named Sa Pi Young were a happy time filled with the love and support from so many people. I’d like to thank the writer who wrote the wonderful Pi Young into existence, the director who always worked hard to film in a beautiful light, the camera director, the lighting director, and all of the staff.” She concluded by sharing, “I hope viewers will look forward to season two, which I’m also very curious about.”

Lee Ga Ryung, who captured viewers’ hearts with her portrayal of radio DJ Boo Hye Ryung, commented, “It feels like just yesterday when I had my nerve-wracking and exciting first script reading, so I can’t believe it’s already the final episode. Since it was my first time in such a big role, I did everything to the best of my ability, but I think there’s still a lot I could have done better. I’ll work hard in season two to become a Boo Hye Ryung who improves herself and is worthy of love. Please look forward to it.”

Lee Min Young acted as Song Won, the older woman who captivated Pan Sa Hyun. She shared, “The time spent as Song Won was filled with great warmth. I really liked how she overcame her pain, and I’m so thankful to the viewers who understood and worried about her. I’ll live on while keeping ahold of Song Won’s warm good-naturedness.”

Jun Soo Kyung played the radio show’s main writer Lee Si Eun, and she shared, “Thank you to the viewers for all of their love and interest. Thank you so much for crying for and expressing your anger on behalf of Si Eun. I won’t forget all of the love everyone has sent.”

Playing the college professor Park Hye Ryun, Jeon No Min commented on how fast the first season ended as he said, “We really sped through as fast as a KTX train. To find out what will happen after ruining and leaving a happy family, you’ll have to tune in to the episode.”

Song Ji In, who played Shin Yoo Shin’s lover Ah Mi, said, “I’m glad I was able to finish filming the first season safely with such great cast members and staff.” Im Hye Young, who played Nam Ga Bin, shared, “Thanks to the help of the amazing cast, writer, director, and staff, I was able to focus solely on Nam Ga Bin.”

Finally, the drama’s production team commented, “Thank you for all of the love and interest shown in the first season. The incredible conclusion to the first season which shared the realistic story of love and marriage will finally be revealed today. Please look forward to both the final episode of season one and the shock that season two will bring.”

In the meantime, check out Park Joo Mi in “My ID Is Gangnam Beauty” below: