Kim Jung Hyun has released a handwritten letter of apology regarding his behavior while filming the 2018 drama “Time,” which he starred in with Girls’ Generation’s Seohyun.

At the time, Kim Jung Hyun had only been criticized for his behavior at the drama’s press conference. Recently, Dispatch published a report stating that several scenes in the drama that included physical contact between Kim Jung Hyun and Seohyun had been modified or removed from the script. Dispatch further revealed text messages shared between Kim Jung Hyun and Seo Ye Ji, his girlfriend at the time. The conversations suggested that Seo Ye Ji was manipulating Kim Jung Hyun into avoiding contact with female staff and actors including his co-star and telling him to change the script accordingly.

Kim Jung Hyun’s letter was released the next day on April 14. Read the full letter below:

Hello. This is Kim Jung Hyun.

The drama “Time” was the first work I played a leading role in as an actor, so it was also a very meaningful project to me. But I brought deep disappointment and pain upon the director, screenwriter, fellow actors, and staff. I apologize.

My memories of the “Time” press conference remain in my head like shards. Even I cannot forgive my attitude at the time. I have so much regret that I wish I could turn back time.

I brought the shameful incident upon myself due to personal issues. I was not able to fulfill my responsibility as the drama’s protagonist and an actor. I apologize without making any excuses.

The process in which I dropped out of the drama “Time” and the behavior I showed at the press conference were all wrong. I sincerely apologize to actress Seohyun who was hurt because of it as well as all other related personnel who worked hard at the time.

I believe I should pay a visit to each of the “Time” staff members and those who were hurt by me and personally apologize to them. Even if it takes a long time, I will go to the director and screenwriter of “Time,” the actors, and all of the staff members who worked [on “Time”] and ask for forgiveness.

I apologize to my agency O& Entertainment as morally right, and I also apologize to Culture Depot for causing them to be mentioned in a disgraceful way. I also genuinely apologize to my fans who always supported me, believed in me, and waited for me.

I bow my head in apology to everyone I caused discomfort to. As I was writing this letter, I was able to reflect on my mistakes and wrong behavior. If I am given the opportunity, I will take nothing for granted and work hard to become a healthy actor who reflects on and manages himself. I am sorry. 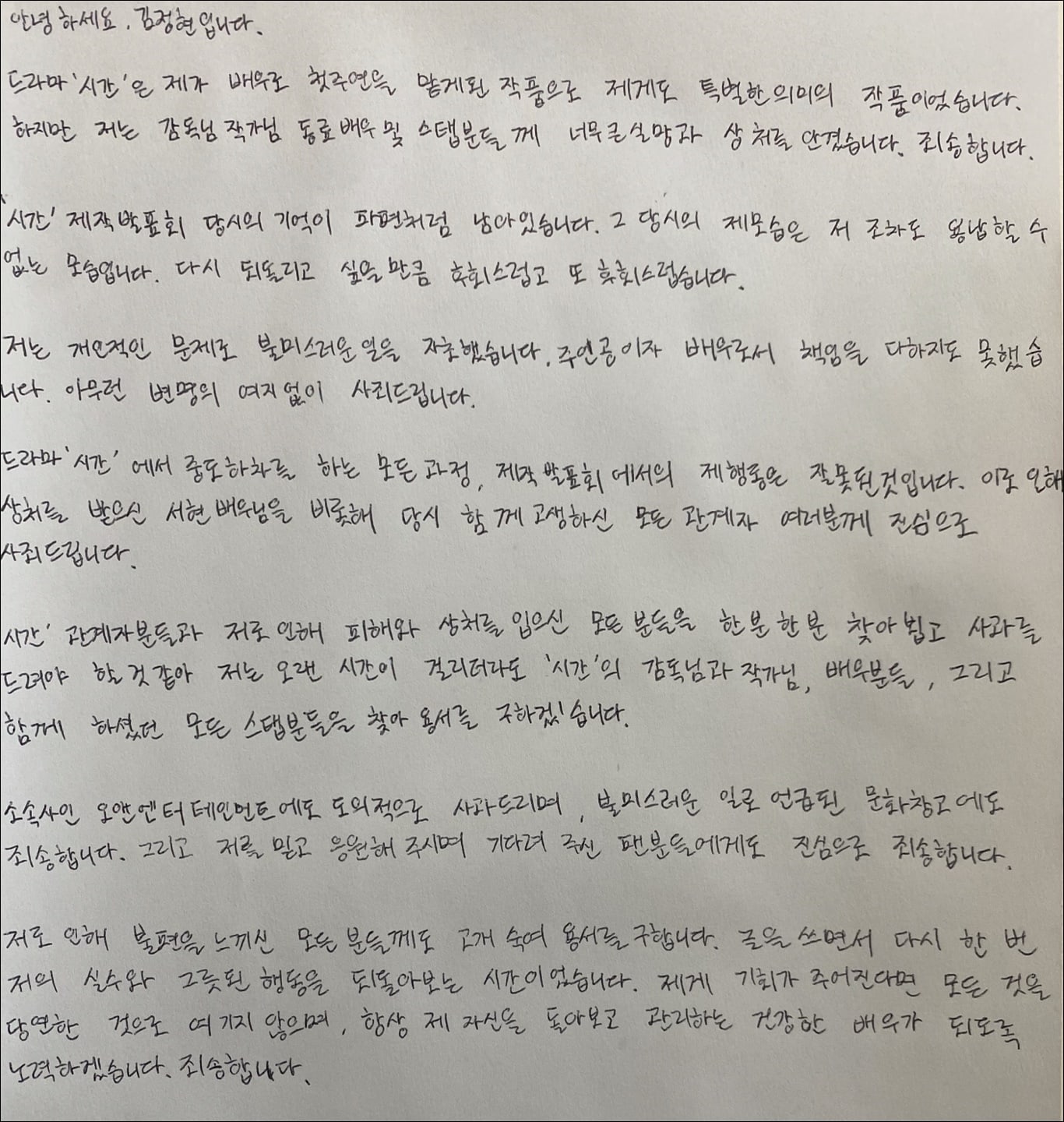 Meanwhile, Kim Jung Hyun is reportedly in conflict with O& Entertainment regarding his exclusive contract. According to reports, Kim Jung Hyun is stating that his contract should expire this May as written in the contract, while the agency argues that his hiatus should not be included in the duration of the contract. Kim Jung Hyun took an 11-month hiatus since his departure from “Time” in 2018 until he returned to acting through “Crash Landing on You” in December 2019. Along with dating rumors with Seo Ji Hye, which both sides denied, it was recently revealed that Kim Jung Hyun is in talks to join her agency Culture Depot.