DAY6 has returned with their new album “The Book Of Us : Negentropy”!

“The Book Of Us : Negentropy” marks DAY6’s first full-group comeback in almost a year since “The Book Of Us : The Demon” and the accompanying title track “Zombie.” Their new song “You Make Me,” composed by Young K and Wonpil, expresses the overflowing feelings of love and the message that hope can bloom in the midst of hardships.

On finally releasing their new album, DAY6 expressed how happy they were to have released so many great songs through their “The Book of Us” series and showed gratitude to their fans for accompanying them through the entire journey. They added, “This is the end of the ‘Book’ series, but DAY6’s story will continue on, so look forward to it.”

In terms of the difference between the new title track “You Make Me” and their previous ones, DAY6 shared, “It portrays the way someone has faith towards love, and it conveys the message that as long as there is love, you can continue walking forward even if you feel like you’ll break and fall. Sound-wise, there are rhythmical parts, but the chorus shows our unique type of melody. We were told that the way the song develops is refreshingly new, so we think that’s meaningful.”

Last May, along with the release of “The Book Of Us : The Demon,” DAY6 announced that Sungjin and Jae would be taking a break from official activities due to symptoms of psychological anxiety. In August, the remaining members Young K, Wonpil, and Dowoon formed a unit called Even of Day and released the album “The Book of Us : Gluon.” Ahead of their new release, the band shared that they were glad they could finally appear in their music video as a full group as their fans had been awaiting for a long time to see them all together.

Asked to choose their favorite songs from the album besides the title track, Jae revealed, “‘Above the Clouds’ is a song I wrote thinking of a friend who passed away a long time ago after battling an illness. I thought of the moment I decided to only remember the good memories instead of the sad ones as I wrote the song, so it’s my favorite one in the album.”

Young K chose “ONE” because it was a track that would sound great at concerts, while Wonpil picked “Only” and described the time the members recorded the harmonies for the song together. Finally, Dowoon said “Everyday We Fight” was his favorite track because it gave him energy and motivation to keep going. 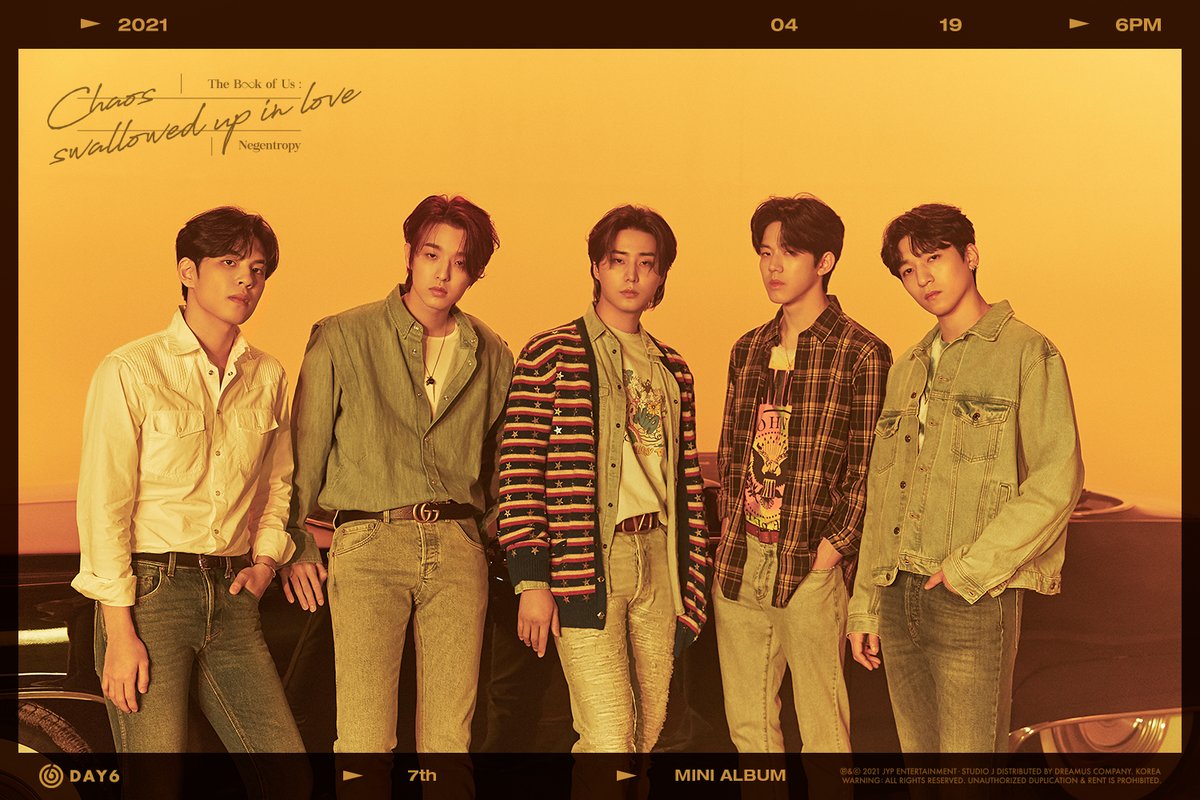 DAY6’s leader Sungjin enlisted in the military last month after wrapping up preparations for the new album. The members revealed that they made lots of memories together before his enlistment and asserted that they weren’t worried about him because he is someone who will be loved no matter where he goes and what he does.

On topping music charts with “Zombie” and setting new personal records, DAY6 humbly commented, “We think it’s entirely thanks to our fans who promoted us that many people listened to the song. We wrote ‘Zombie’ hoping it would be a song that would bring solace to listeners and the members, so it was meaningful that it received lots of love.” As for their next step after their success on the charts, the band said, “We were thankful and happy about the many positive results, but we try not to let it influence the messages we convey or the attempts we make. Our goal is to continue working on music with the members and creating songs that will bring comfort to listeners.”

In line with the album’s theme of love being a complete force, DAY6 shared that support from their fans My Day provided the energy to keep them going.

DAY6 is a band known for their amazing concerts, but like everyone else, they have been unable to perform in front of their fans due to the COVID-19 pandemic. In response to a question asking which song they would perform first if they could meet their fans directly, Jae and Wonpil chose “Zombie,” Young K “Time of Our Life,” and Dowoon their new b-side “Everyday We Fight.”

Over the past year, Jae has released several collaboration tracks with other artists, regarding which he commented, “Working with the artists I always liked, I was happy because I felt like I had been acknowledged musically. I’d like to study more hip hop and R&B in the future.”

Young K has been emerging as a multi-entertainer through his activities as a content creator, radio DJ, and musician. Asked if there were any other areas he was interested in trying out, he shared, “I’m ready to bring out new music, so please wait for it. First, I want to commit myself to the things I’m doing now, create good music, and sing more. No one knows what will happen in the future, but that’s what I’ve decided for now.”

Wonpil was recently cast in the musical “Midnight Sun” as the main character Ha Ram. He revealed that he cried after reading the script for the first time and decided to star in the musical because it had a heartwarming story and great songs. He expressed, “I hope that those who watch the musical will get warm feelings. I will do my best as DAY6’s Wonpil.”

Wrapping up, the group shared final words for their fans. “It was probably not easy to wait, but we are sincerely thankful that you always waited for us and cheered us on. There is a force that brings us together, and we believe we can lift each other up when we fall. We feel grateful and lucky that the people who love DAY6 are My Day, so we want to provide you with comfort and strength. We will always continue to work hard from here to bring you good music.”

Watch the music video for DAY6’s “You Make Me” here!