Some of the contestants from Mnet’s “Road to Kingdom” got together for a heartwarming reunion on “Kingdom: Legendary War”!

On the April 22 episode of “Kingdom,” THE BOYZ’s Hyunjae, Juyeon, and Q met up with several of their fellow contestants from “Road to Kingdom,” the prequel show in which seven groups competed for a spot in the “Kingdom” lineup. THE BOYZ emerged the final winner of the show, which secured them the chance to compete on “Kingdom.”

While preparing for the second official round of competition, Hyunjae, Juyeon, and Q took some time off to grab a meal with ONEUS’s Hwanwoong and Seoho, VERIVERY’s Kangmin and Dongheon, and ONF’s Hyojin and E-Tion.

Each of the different groups thoughtfully prepared a gift for THE BOYZ, from vitamins to certified Korean beef. Hwanwoong and Seoho explained, “We thought you might need vitamins, since [‘Kingdom’] is physically tiring,” and Hyunjae jokingly replied, “We are extremely tired.” Hwanwoong responded with a laugh, “I was really worried about whether you guys would be doing okay.”

Dongheon similarly expressed concern about THE BOYZ, asking, “You’ve been doing okay, right?” When Hyunjae reassured him that they were, Dongheon worried, “There’s a little sadness in your eyes.” 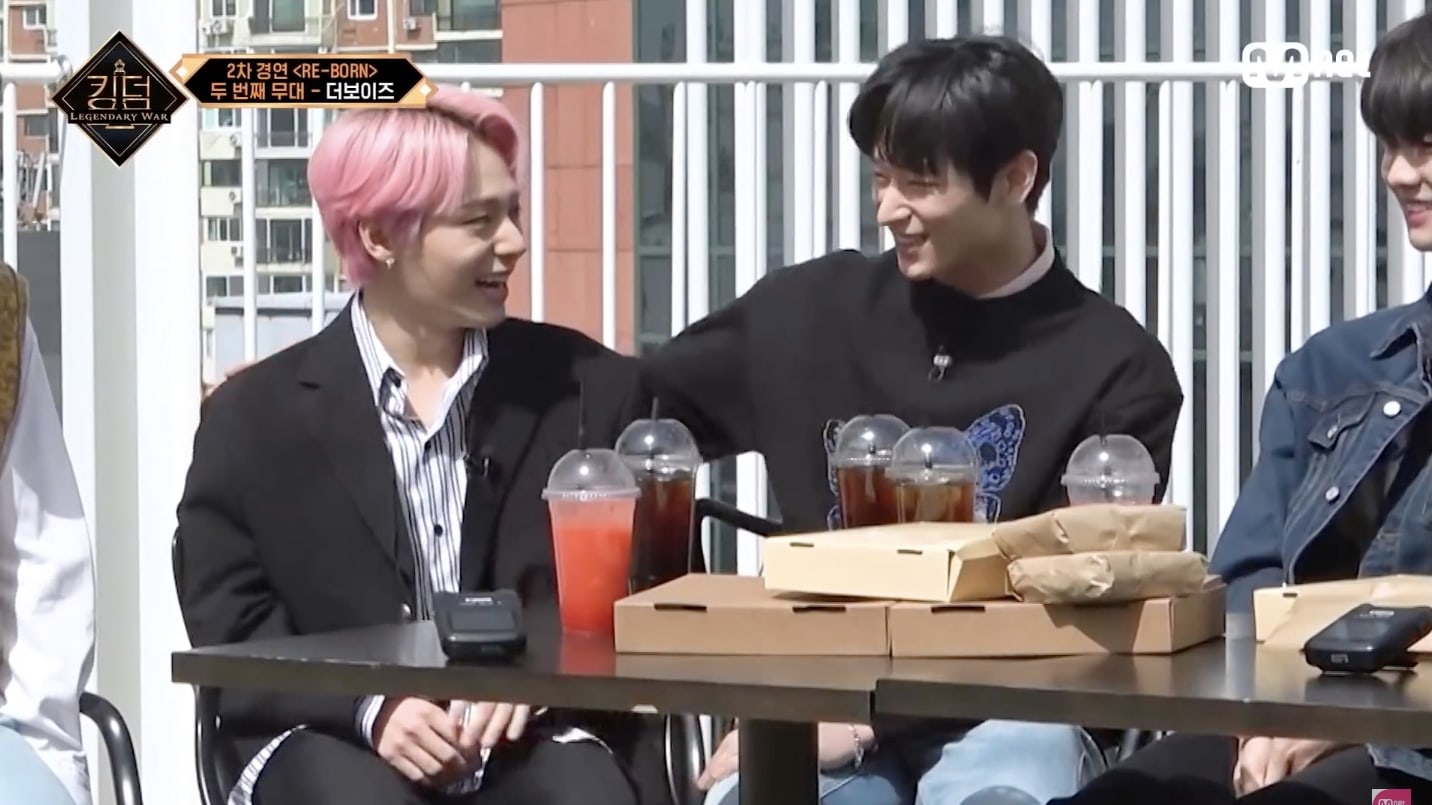 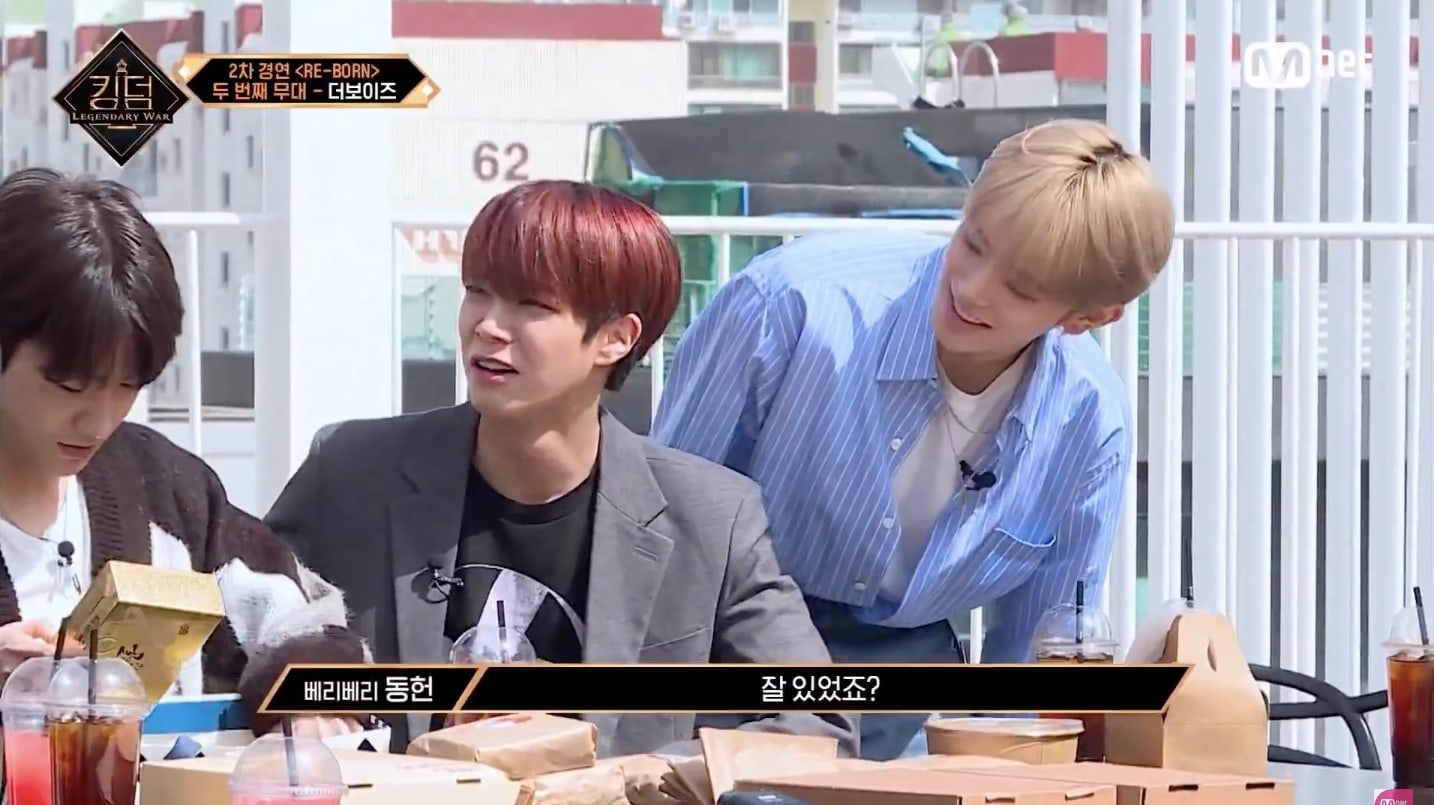 After everyone had gathered together, Juyeon shared, “I’m really happy to see all of you again for the first time in a long while.” Dongheon then showed love for THE BOYZ by proudly praising their first performance on “Kingdom,” remarking, “I watched the ‘Kingdom’ introductory battle. I thought, ‘As expected, THE BOYZ is THE BOYZ for good reason.'”

Hyunjae replied, “We kept saying this over and over amongst ourselves: ‘Let’s do this not just for ourselves, but for all the groups on ‘Road to Kingdom.'”

Juyeon then pointed out, “You haven’t heard our results yet,” prompting E-Tion to exclaim, “First place!” Dongheon agreed, “First place. If we had been the ones voting, we would have given you first place.”

Hyunjae revealed, “Unfortunately, we didn’t win first place, but we did get a really great result. We got second place.” Hwanwoong responded encouragingly, “If you got second place, that means you made a strong start.” 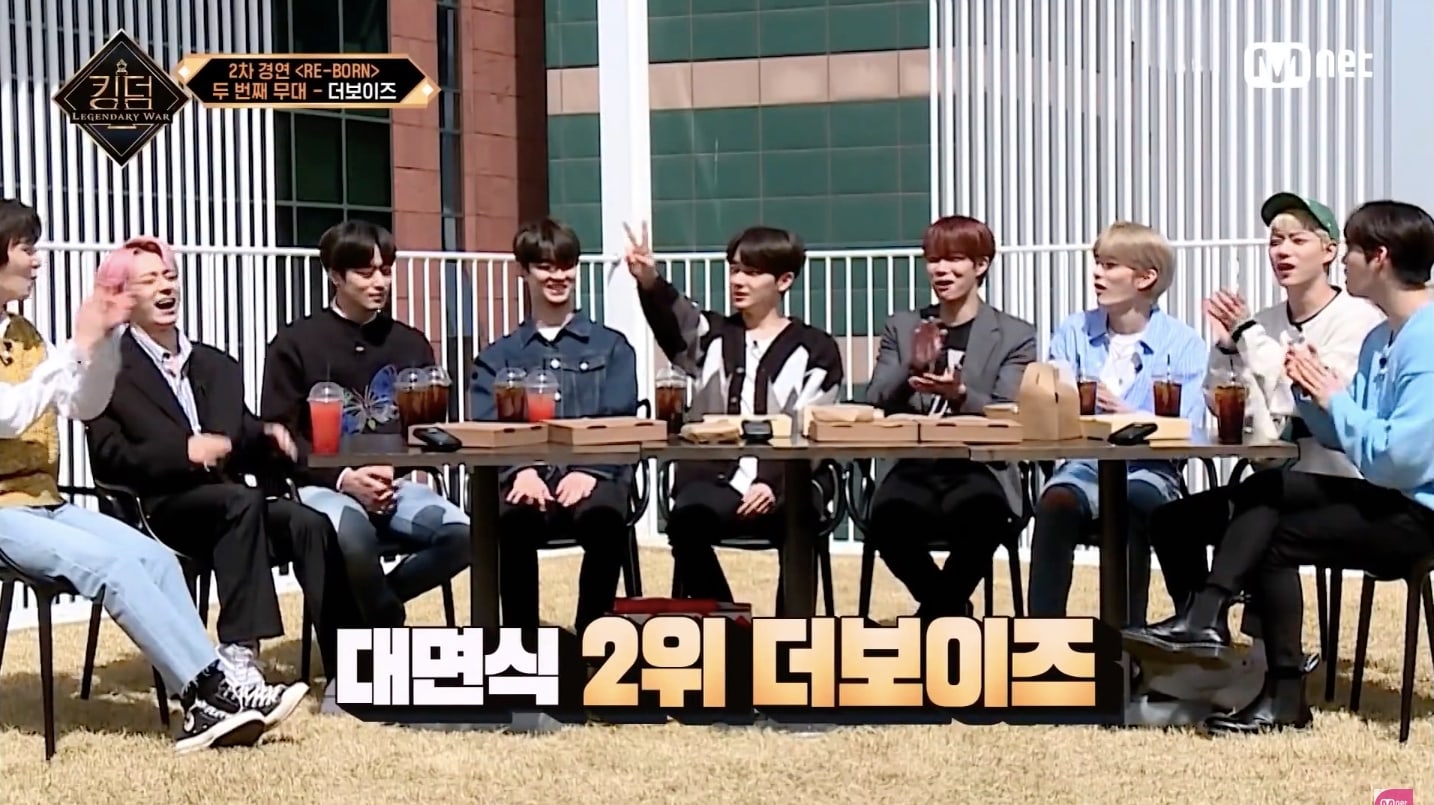 Juyeon went on to share that THE BOYZ had taken third place in the initial rankings for Round 1 based on the competing groups’ votes and the expert panel’s evaluations. Q confessed with a smile, “I wish we had done better in the first round.”

When E-Tion commented, “I heard you guys were really worried about something,” Juyeon opened up about the concerns THE BOYZ was facing. “Since Round 1, we’ve been struggling with this dilemma,” explained Juyeon. “We’re debating whether we should continue with what we’re best at, or whether we should try to do something new and take on a shocking challenge.”

After a moment of thought, Hwanwoong replied, “In my opinion, while THE BOYZ’s intense dance performances are great and really stand out, I think the storyline behind your performances is also really strong. It makes viewers wonder, ‘How did they think of something like this?’ You make it easy for anyone watching to immediately understand the story [behind your performance], but there are also elements that really surprise the viewers. Even as a fellow competitor, I was applauding as I watched you guys.”

He added, “If you have faith [in your storyline], I think you’ll be able to put on a cooler performance than any group, even if you take on lots of new challenges.”

In a separate interview, Hyojin remarked, “It’s good to keep first place in your sights, but it can be a lot of pressure to think to yourself, ‘I have to be first place.’ I think that kind of thinking can actually have a negative effect, so I want to tell [THE BOYZ] to relax and take it easy [during ‘Kingdom’].”

Dongheon cheered on THE BOYZ by declaring, “All of the ‘Road to Kingdom’ groups are rooting for you guys, so I’m sure you’ll reach the top.” Hwanwoong chimed in, “I hope you’ll be a lot more confident. You guys are doing great, so I hope you’ll find strength.” 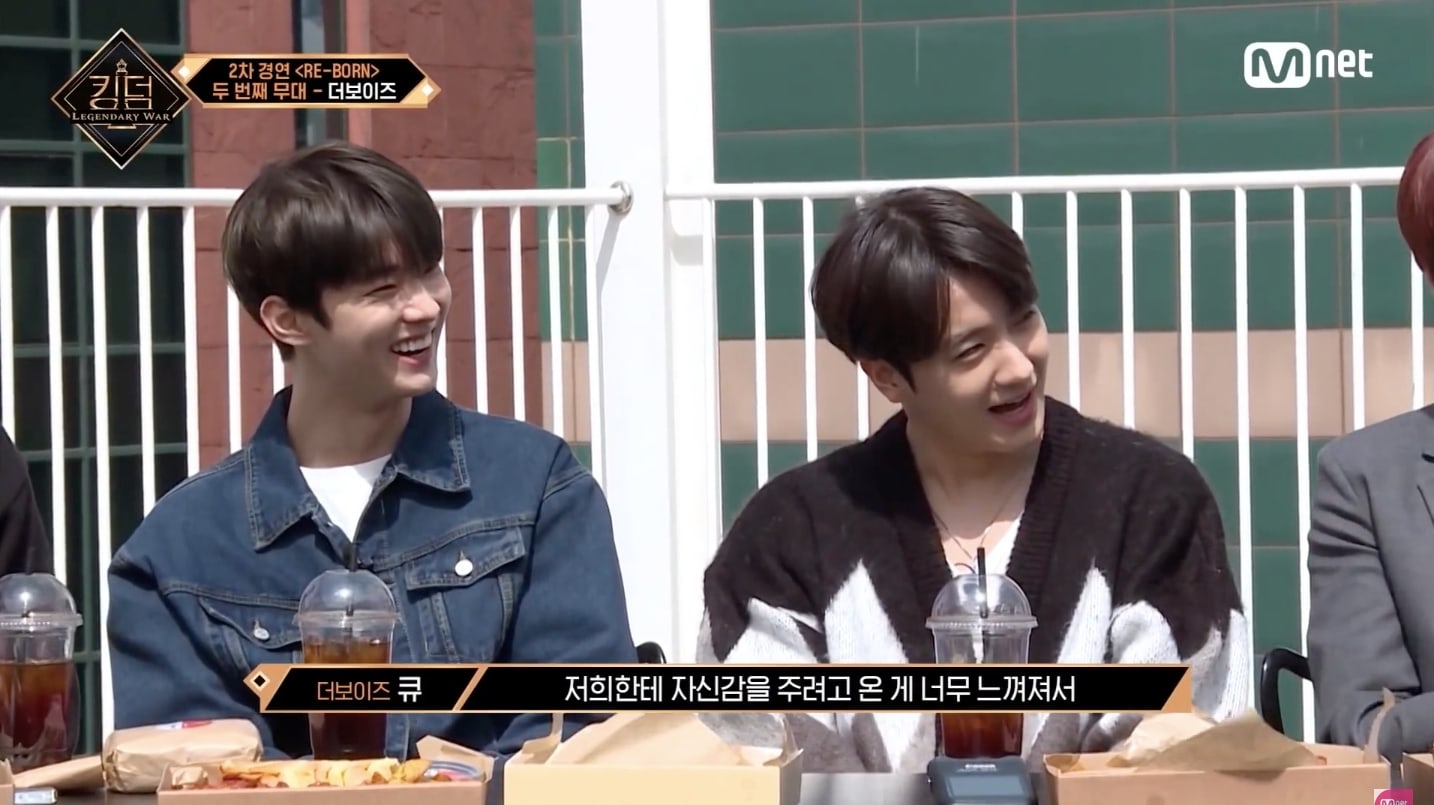 All three of the members of THE BOYZ then sincerely thanked their fellow “Road to Kingdom” contestants for their support. Juyeon commented, “Honestly, I think what we needed most was to hear the words, ‘You’re doing a good job.'” Q agreed, “I’m not just saying this, I really mean it. You were a huge help. Really, you gave us a lot of help. We were really worried and struggling with our concerns, but I feel like we’ve found direction again, thanks to you guys. I feel at peace now. Thank you so much, really.”

Later, Q said in his interview, “I could feel that they came to give us confidence, and that made me feel great.” Juyeon added, “It’s really important to have confidence in ourselves and say to each other, ‘We’re doing great. We can do well,’ but I think we had forgotten that.”

Check out the clip of the “Road to Kingdom” contestants’ reunion below!

Watch the full episode of “Kingdom” with English subtitles here: