Kang Daniel has dominated this week’s Gaon charts with his latest release!

On April 22, Gaon Chart officially announced that Kang Daniel had earned a quadruple crown after topping four separate charts for the week of April 11 to April 17.

Not only did Kang Daniel’s latest mini album “YELLOW” enter the physical album chart at No. 1, but his new title track “Antidote” also debuted at No. 1 on the overall digital chart, digital download chart, and BGM chart (which tracks the songs that people purchase to use as background music for their blogs and KakaoTalk profiles).

IU continued to top the streaming chart with her hit song “LILAC” for the third consecutive week, while BTS held onto their spot at No. 1 on Gaon’s Social Chart 2.0.

Check out the top five for each of the latest Gaon charts below!

Kang Daniel’s “YELLOW” debuted at No. 1 on this week’s physical album chart, while SHINee’s new repackaged album “Atlantis” entered the chart at No. 2.

EXO’s Baekhyun’s solo mini album “Bambi” stayed strong at No. 3, followed by Hwang Chi Yeol’s “Be My Reason” at No. 4.

Finally, the OST for EXO’s Chanyeol’s movie “The Box” rounded out the top five for the week. 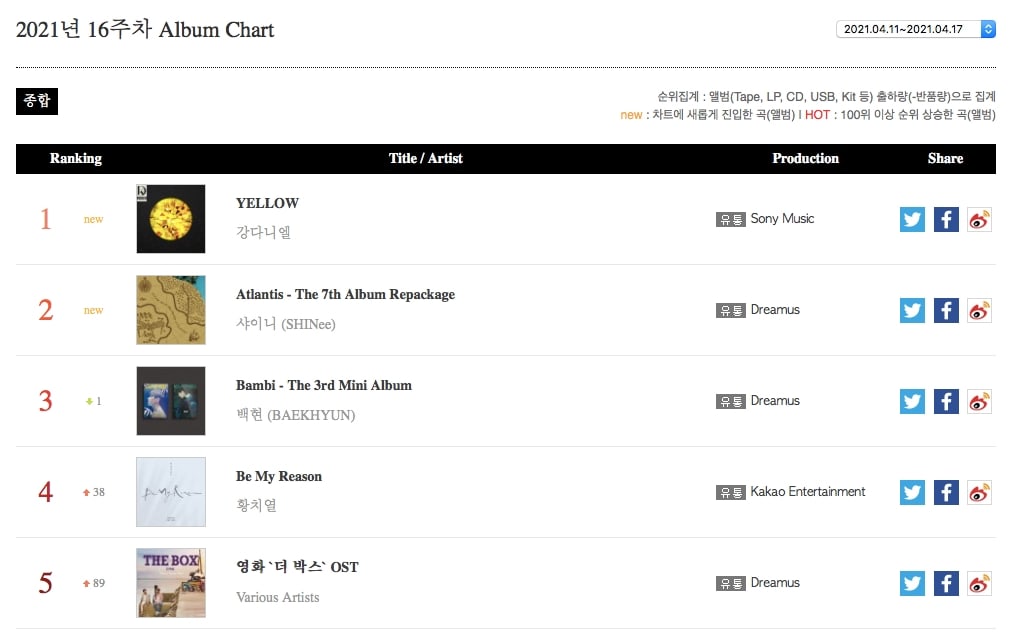 Kang Daniel’s “Antidote” entered the digital download chart at No. 1, while SHINee’s new title track “Atlantis” debuted at No. 2. 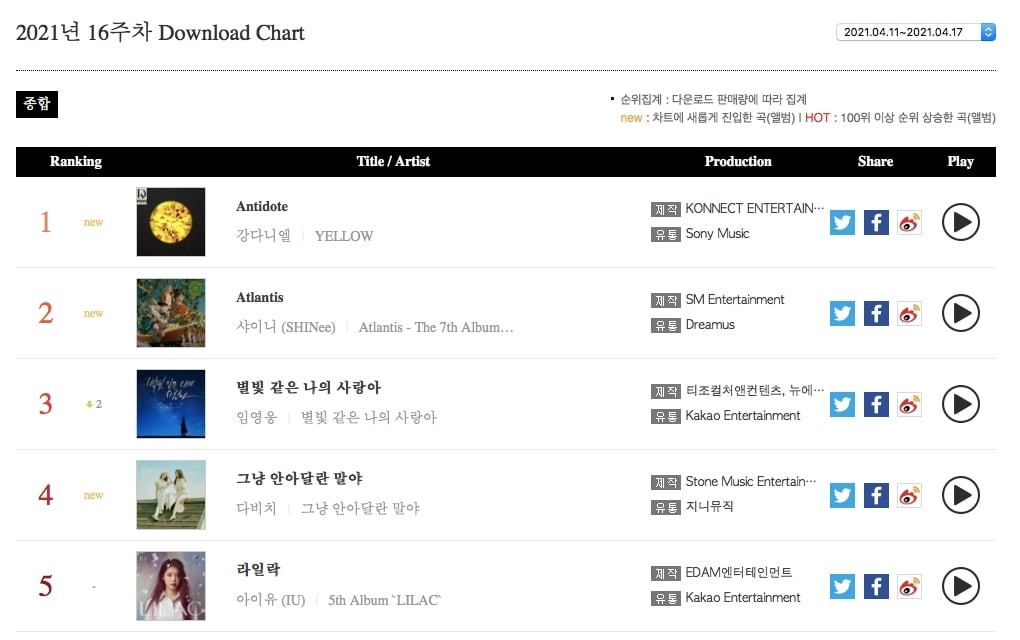 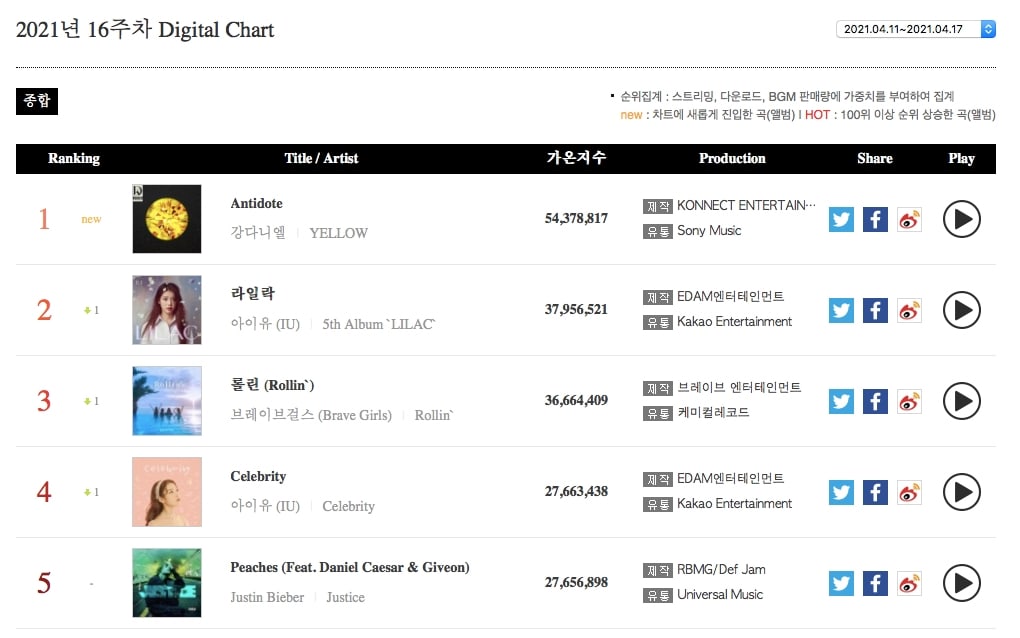 IU’s “LILAC” successfully defended its position at No. 1 on the streaming chart for the third week in a row, while Brave Girls’ “Rollin'” and IU’s “Celebrity” also held onto their respective spots at No. 2 and No. 3.

Justin Bieber’s “Peaches” (featuring Daniel Caesar and Giveon) rose to No. 4, and Brave Girls’ “We Ride” claimed No. 5 for the week. 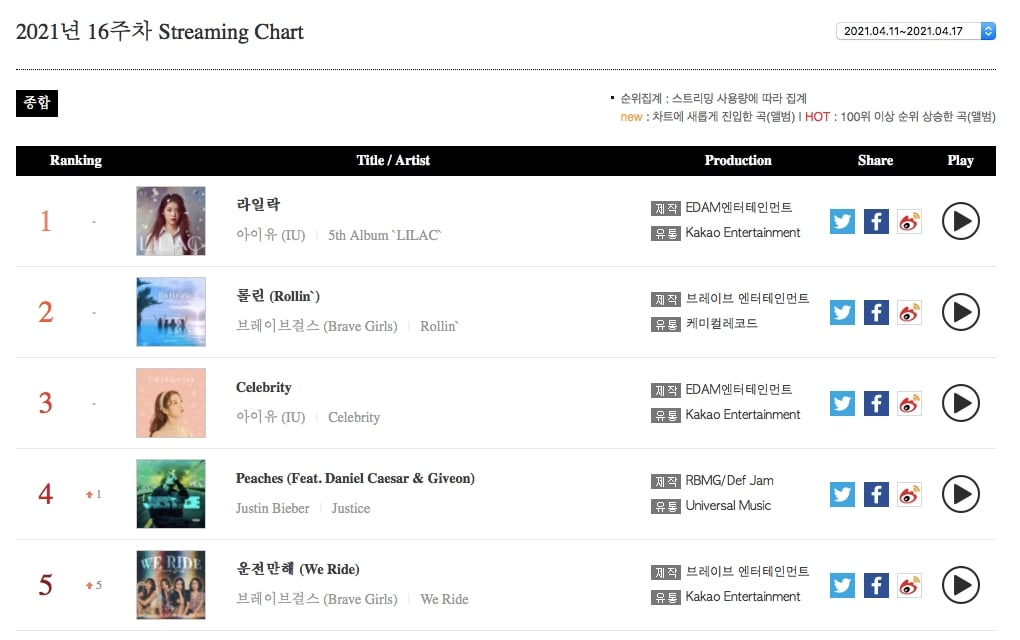 BTS remained No. 1 on this week’s Social Chart 2.0, and BLACKPINK similarly maintained their position at No. 2. Trot singer Young Tak rose to No. 3 for the week, followed by Im Young Woong at No. 4 and Jang Min Ho at No. 5. 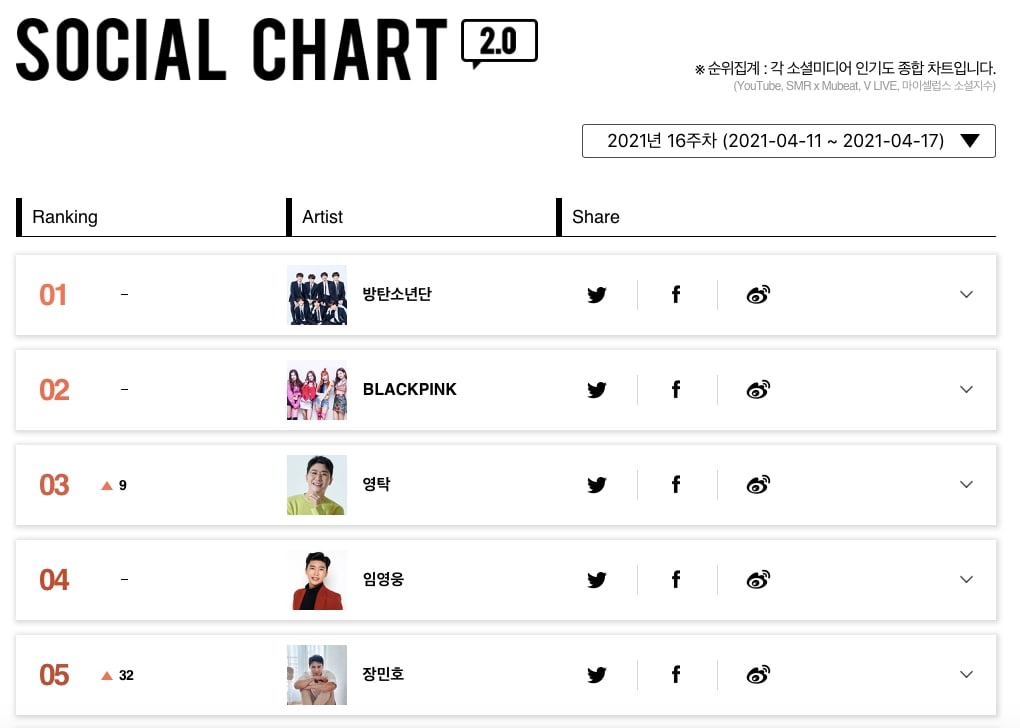 Congratulations to Kang Daniel and all the other artists who made this week’s charts!