Episode 5 Of “Kingdom”: A Heist, A Concert, & A Disappearing Boy

This week is the second part of round 2, “Re-birth,” where teams dig into each other’s discography and choose a song to reinterpret. To finish off this round, we have a group of heisters, a quartet getting ready to take the stage, and… a disappearing boy?

Read on to find out just what is going in episode 5 of “Kingdom: Legendary War”:

Warning: Partial results for round 2 are listed towards the bottom.

ATEEZ chose to switch with iKON for their “Re-birth” performance, and most of their on-air package was dedicated to them confessing their love for their sunbaes. After some discussion, they eventually settled on performing “Rhythm Ta.” This time around, they forwent their pirate theme and instead turned themselves into bank robbers. And to get themselves ready for their stage, they… went to play laser tag.

As with the other ATEEZ performances we’ve seen, this was one that again highlighted their strong storytelling abilities. They managed to hook us right in from the moment we saw them enclosed in that tiny van, where all of a sudden, they mask up. The concept is that the society they’re in has banned music and arts and so they’re retaliating and are determined to bring the  rhythm back.

Their energy is electrifying, and there’s something about them that naturally keeps your eyes glued to the screen during the whole performance. iKON also commented on how they successfully ATEEZ-ified the song.

Also, near the end of the song, we finally see the item that they were after — the hourglass seen in round 1. (Which means, in this timeline, they’re about to meet one cranky Kraken!)

Rowoon had gloves on when he broke some glass in their own performance, and Chani made sure to remind him of it. Heh.

BTOB was chosen by Stray Kids for this round, and arguably, these two groups are very different, which makes for an even more exciting challenge. We saw the two groups prodding each other for details on their performances, though no doubt BTOB, being the chaotic seniors, always ended up having the upper hand. (Cue the BTOB members hanging up on Stray Kids when asked “Who’s your favorite Stray Kid?”)

Changsub couldn’t help but wonder why Stray Kids picked them for the switch.

The song the quartet ultimately decided on was “Back Door,” and they wittily turned the knocks heard in the original song into knocks on waiting room doors. The whole concept was downright fun, where the four acted out getting ready backstage for their concert. The camera followed each member into their own waiting rooms, and each section (both musically and visually) was uniquely different and showcased each member’s individualities.

The performance effectively pushed BTOB’s strong suits to the forefront and delivered a flashy show without needing them to do the flashier stunts that naturally come easier to the younger groups.

Stray Kids was on their feet giddy with excitement the whole time, just fanboying over them and the general fact that their sunbaes were covering their song. It was clear that all the other groups were having tons of fun watching this “concert,” and this was before Minhyuk ripped off his top too. 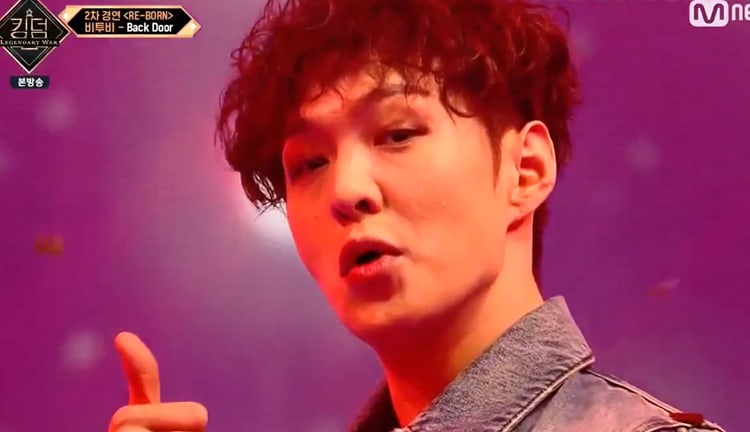 Changsub’s ending pose cracked me up! I’m guessing he was unwell then, but at the end of the day, he’s still Changsub!

Stray Kids chose to perform “I’ll Be Your Man” as it was something different from their usual discography. This is a song that even BTOB finds hard to sing because of the range and the vocal technicalities needed.

So in order to prepare for their performance, the kids go… craft friendship rings. (What’s with ATEEZ and Stray Kids’ randomness. Heh!) Each of the rings had their names engraved on it, though Seungmin made sure Changbin’s was extra special.

The initials on Changbin’s ring were… you guessed it: MYH (for “MooYaHo”)

Their performance was centered around their dire prayer to protect those they loved, and you could really feel the desperation pulsating off of them. The part where the little boy suddenly disappeared during Changbin’s part was especially well thought out and made everyone that much more immersed in their stage.

Speaking of Changbin’s part, his rap sounded so good, and his throaty, huskier tone made him sound even more desperate and earnest. The part near the end where his raps were laid under the vocals was especially goosebump-inducing. And Han’s high notes were so clean cut too. Seriously, what can’t that boy do?

On the other hand, I.N was feeling pretty bummed out about how he did, and he was tearing up soon after they finished filming. Bang Chan was an extra sweet hyung, first commenting on how big he’s gotten and how he could barely hug him now, then secretly whispering that he too had made mistakes. Aww…group hug!

Just like the end of round 1, we were shown their partial results including experts’ evaluations and group evaluations. These results are as follow: 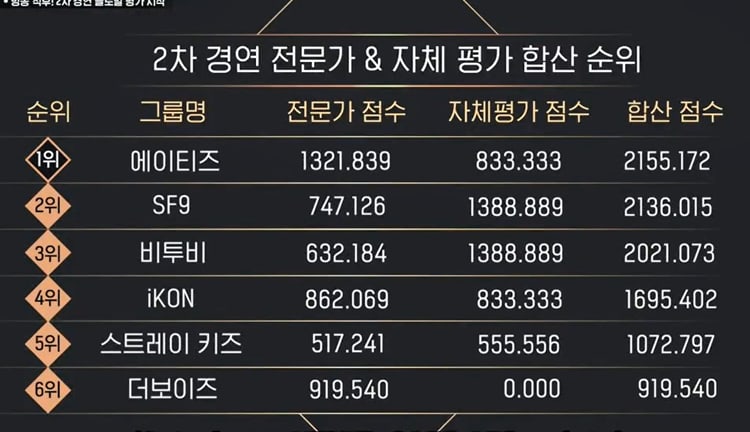 From first to sixth is ATEEZ, SF9, BTOB, iKON, Stray Kids, and THE BOYZ, respectively. Second column is experts’ evaluations; third column is group votes (in case anyone is wondering, the received votes from top to bottom is 3, 5, 5, 3, 2, 0 votes, respectively); fourth column is the total.

Next week, the boys will be having a sports day! For some reason, I have a feeling it’s going to be pretty chaotic!

Which of these performances was your favorite? And are Fantasies (SF9’s fandom name) glad that Dawon doesn’t need to shave his head? Let us know in the comments below.

Belinda_C is super excited to see the boys have fun out in the sun next week! Talk dramas, SEVENTEEN, and Shinhwa with her on Twitter!