On May 3, Starship Entertainment released a statement about Shownu’s health and his participation in MONSTA X’s upcoming comeback.

Last summer, it was revealed that Shownu had been diagnosed with retinal detachment in his left eye and that he had undergone surgery to correct the issue.

In their new statement, Starship stated that despite regular monitoring of his condition from medical professionals, Shownu had begun experiencing discomfort in his eye after being exposed to bright lights during the preparations for MONSTA X’s comeback. At the hospital, he was informed that the discomfort was being caused by sub-retinal fluid and proliferative vitreoretinopathy (PVR) as a complication of the original detachment.

As the doctors recommended rest to avoid further damaging his condition, Starship stated that after discussions with Shownu and the other MONSTA X members, it was decided that Shownu would not participate in promotional activities for MONSTA X’s upcoming comeback with the new mini album “One of a Kind.” 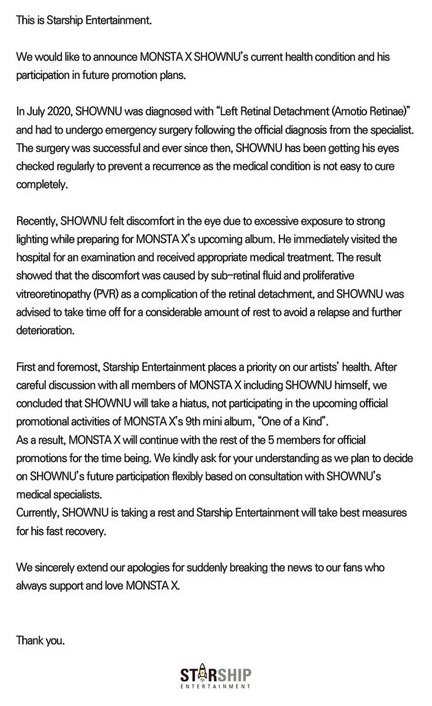 “One of a Kind” is slated for release on June 1.

MONSTA X
shownu
How does this article make you feel?