Up until now, Kim Do Gi has been going undercover alone, but this time, he will join hands with Park Jin Eon (Bae Yoo Ram) to catch the criminals behind a voice phishing organization. For this mission, Kim Do Gi will transform into Mr. Wang, a businessman from Harbin, and Park Jin Eon will become Lee Ja Sung, a person born in 2002 who applied for a high-paying part-time job.

On May 7, the drama unveiled new stills that show a peek at Kim Do Gi’s, Park Jin Eon’s and Choi Kyung Goo’s (Jang Hyuk Jin’s) new looks. First off, Kim Do Gi steals the attention with his dazzling appearance. He is wearing a fur coat and thick chain necklaces, which are supposed to symbolize how wealthy he is, and his hair is gelled back into a trendy style.

On the other hand, Choi Kyung Koo is now sporting long hair that is tied into a low ponytail. He’s wearing dragonfly sunglasses and a wild leather jacket, and it almost seems as if he’s trying to look like the character Jang Chen from the movie “The Outlaws.”

In the upcoming episode, Park Jin Eon will turn into a fresh and innocent man in his twenties. He has a cute perm and a sweet grin, and his computer monitor is labeled “Central Distract Professor Kim Min Soo,” which hints that this is the identity he will have to use for the voice phishing acts. 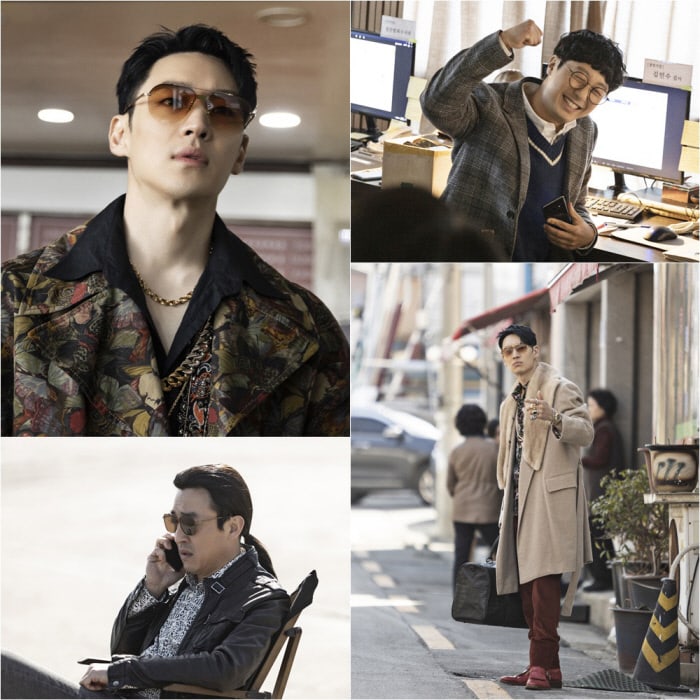 Watch the drama on Viki with English subtitles: