Watch: “Kingdom” Vocal Units Get To Know Each Other In 1-On-1 Q&A Sessions

The vocal teams of Mnet’s “Kingdom: Legendary War” recently got to learn more about each other through eye-contact chats!

In the first half of the third round of “Kingdom,” ATEEZ, Stray Kids, and BTOB formed one team, while THE BOYZ, SF9, and iKON formed another. The two teams then went head-to-head in rap unit and dance unit performances, and in this week’s episode, the vocal units will face off in the final collaboration unit battle.

In newly released videos, the vocal units try to get to know one another better by chatting one-on-one while making eye contact for 120 seconds.

BTOB’s Eunkwang is adorably flustered when paired up with ATEEZ’s Jongho, and he struggles to stop giggling. After composing himself, he asks where Jongho is from and is surprised to learn that the neighborhood where he grew up is where Eunkwang has taken many vocal lessons. Jongho then asks, “What do you honestly think about my singing?” Eunkwang answers, “You’re really, really good. With just the right opportunity, I think you’ll be able to become more well-known as a vocalist to the public.” 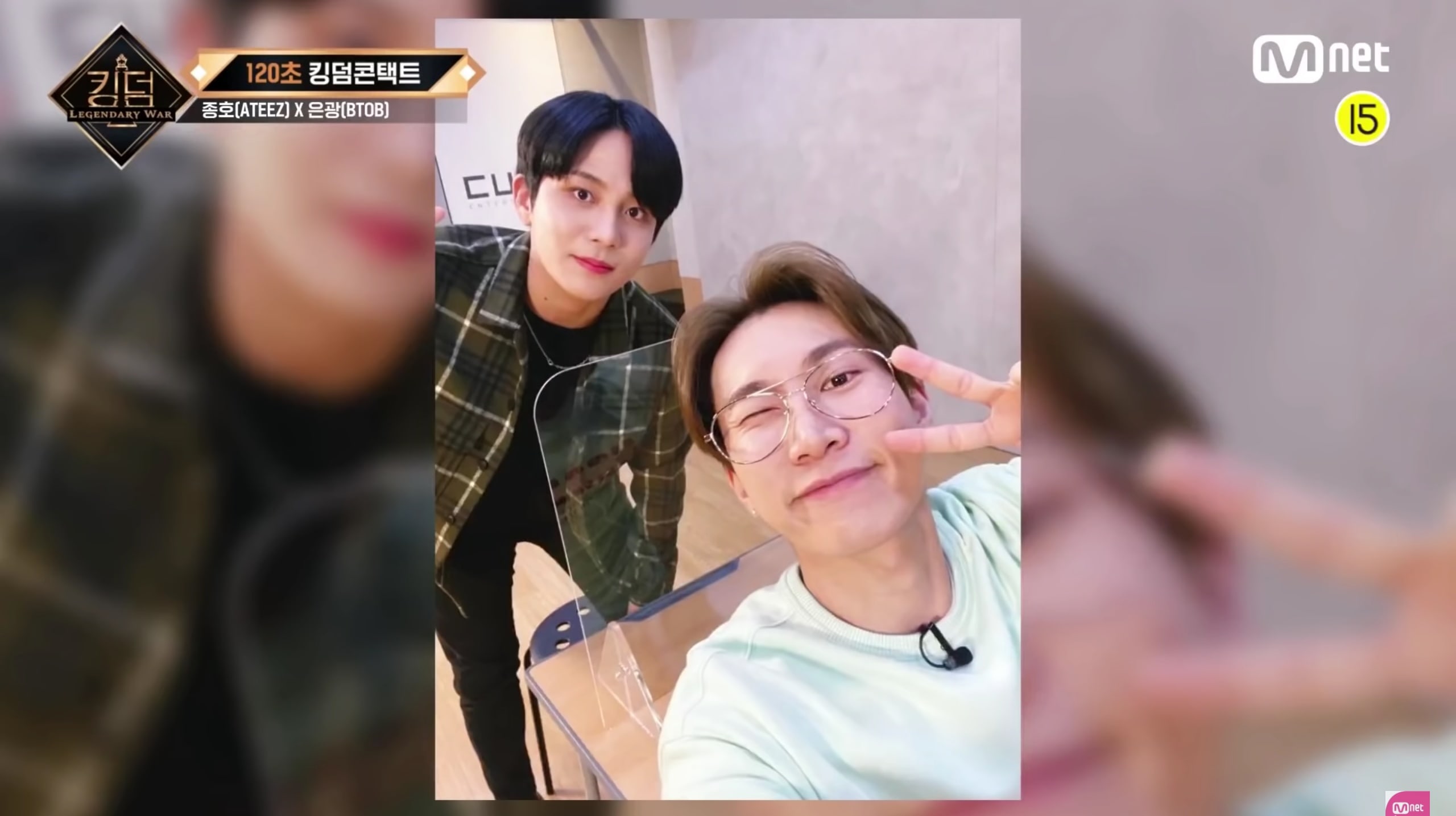 In his chat with Seungmin, Eunkwang asks if the Stray Kids member finds him hard to approach. Seungmin slowly starts to explain that at the moment, he still finds him a bit hard to approach, when BTOB’s Minhyuk suddenly shouts from off-camera, “Lies! It’s definitely really hard!” 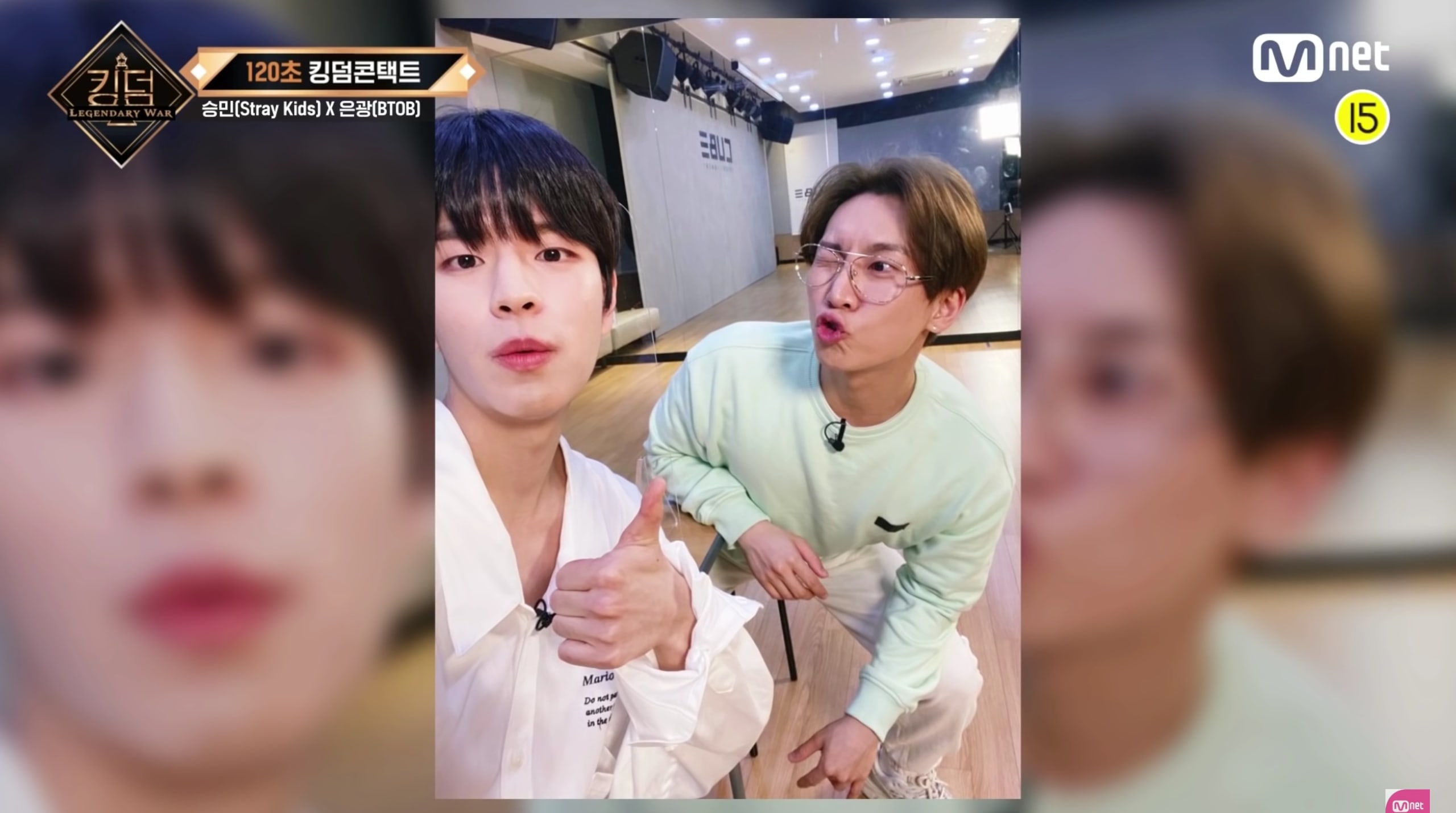 In the final chat, Seungmin asks Jongho which hair color he thinks suits him best. Jongho responds, “I think my current dark hair,” to which Seungmin readily agrees. Seungmin then discusses playing baseball as a kid. He adds, “I do still watch now, but the team I support doesn’t have a great ranking.” Jongho asks which team it is, and Seungmin shyly answers, “That’s a secret.” 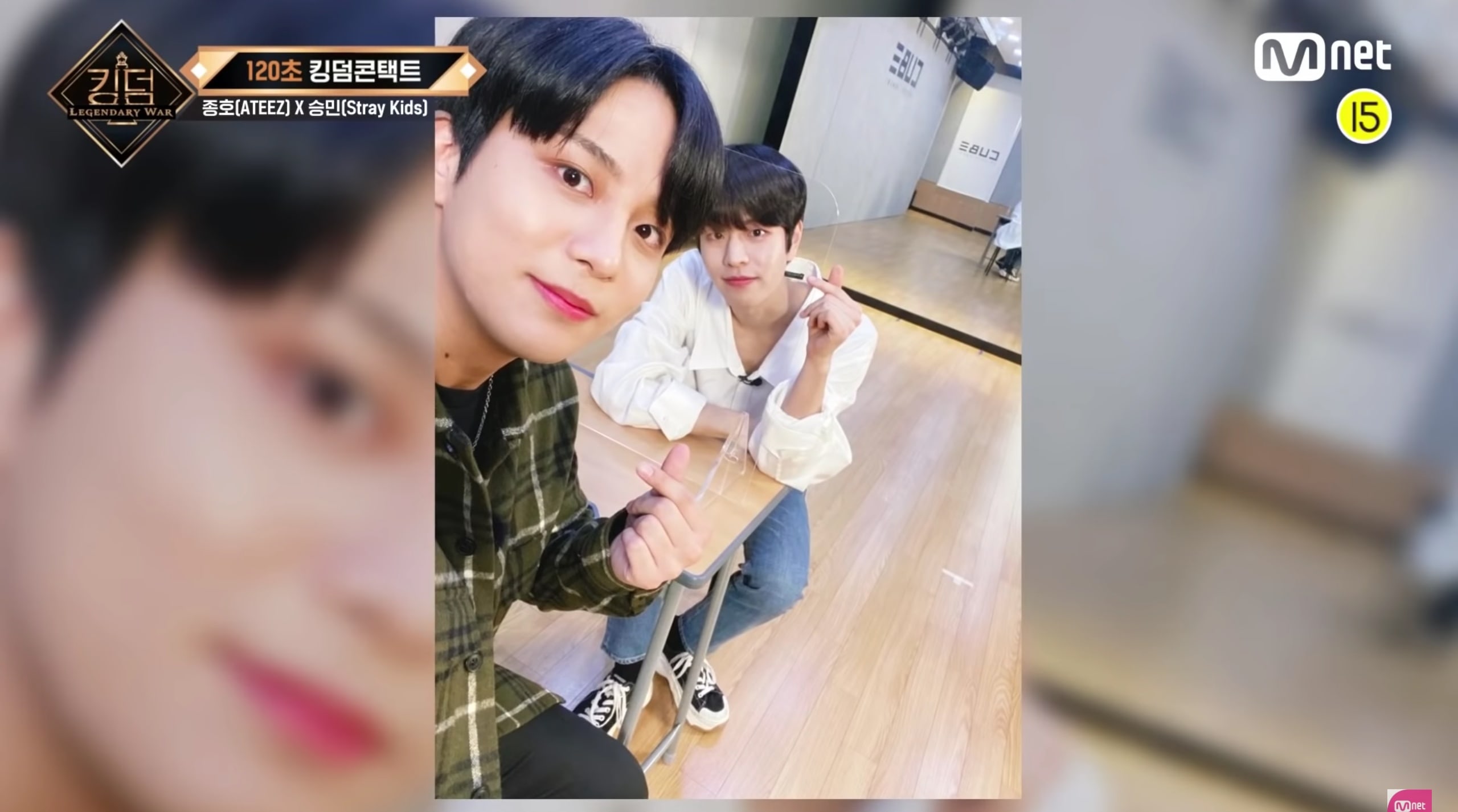 Over on the other team, SF9’s Inseong asks iKON’s Junhoe right off the bat what his first impression of him was. Junhoe replies, “I liked you the best. You seemed very gentle, with an extremely pure and clear soul. I’m serious. If you ask Jinhwan, you’ll know.” 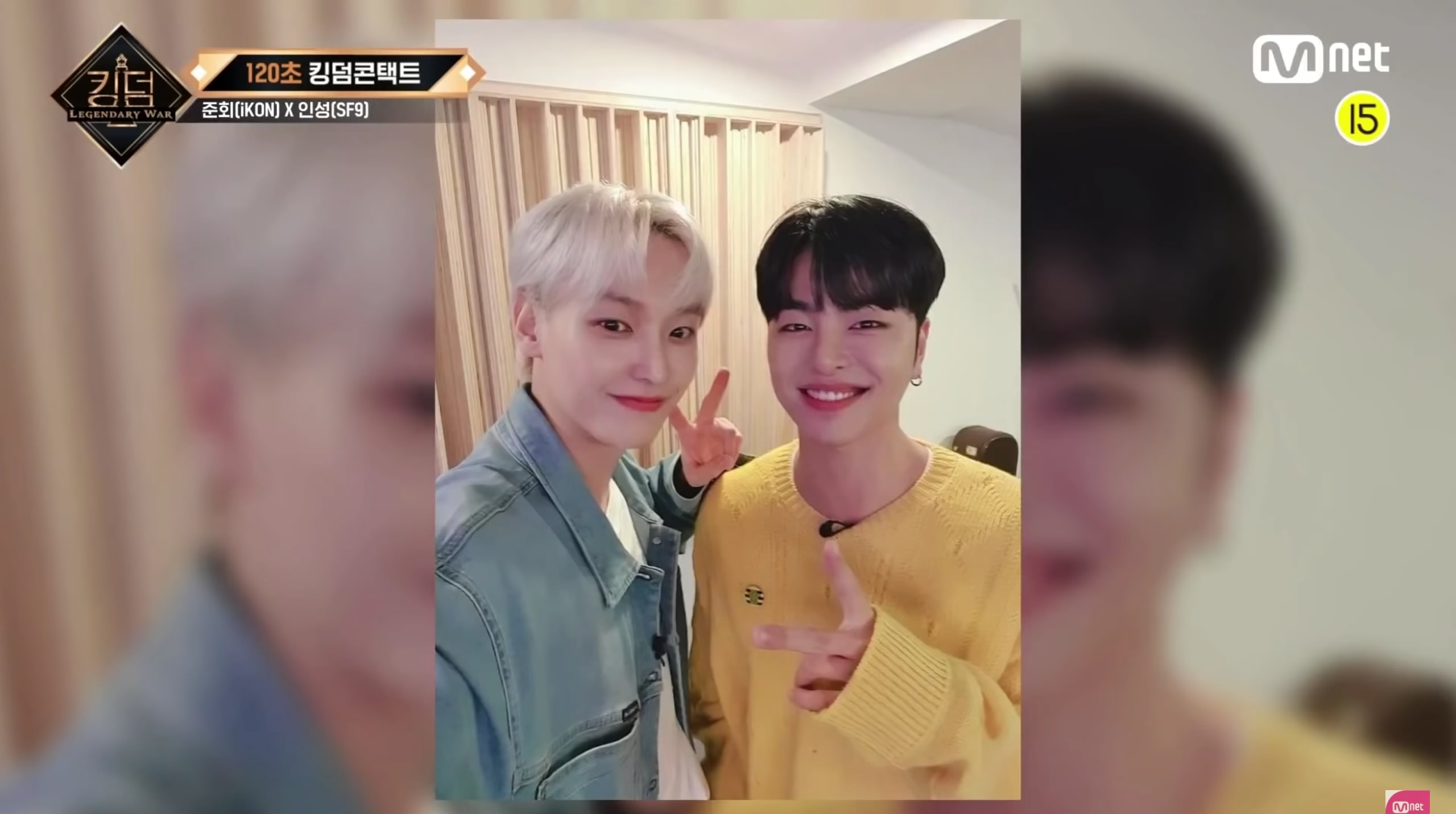 THE BOYZ’s Sangyeon compliments SF9’s Jaeyoon’s body, and the two begin to discuss exercise before agreeing to hit the gym together one day. Jaeyoon then mentions a time they were both at the recording studio, and he compliments Sangyeon’s vocals. Jaeyoon adds, “Even after you left, the writer and I kept talking [about you]. Your vocal tone is so nice.” 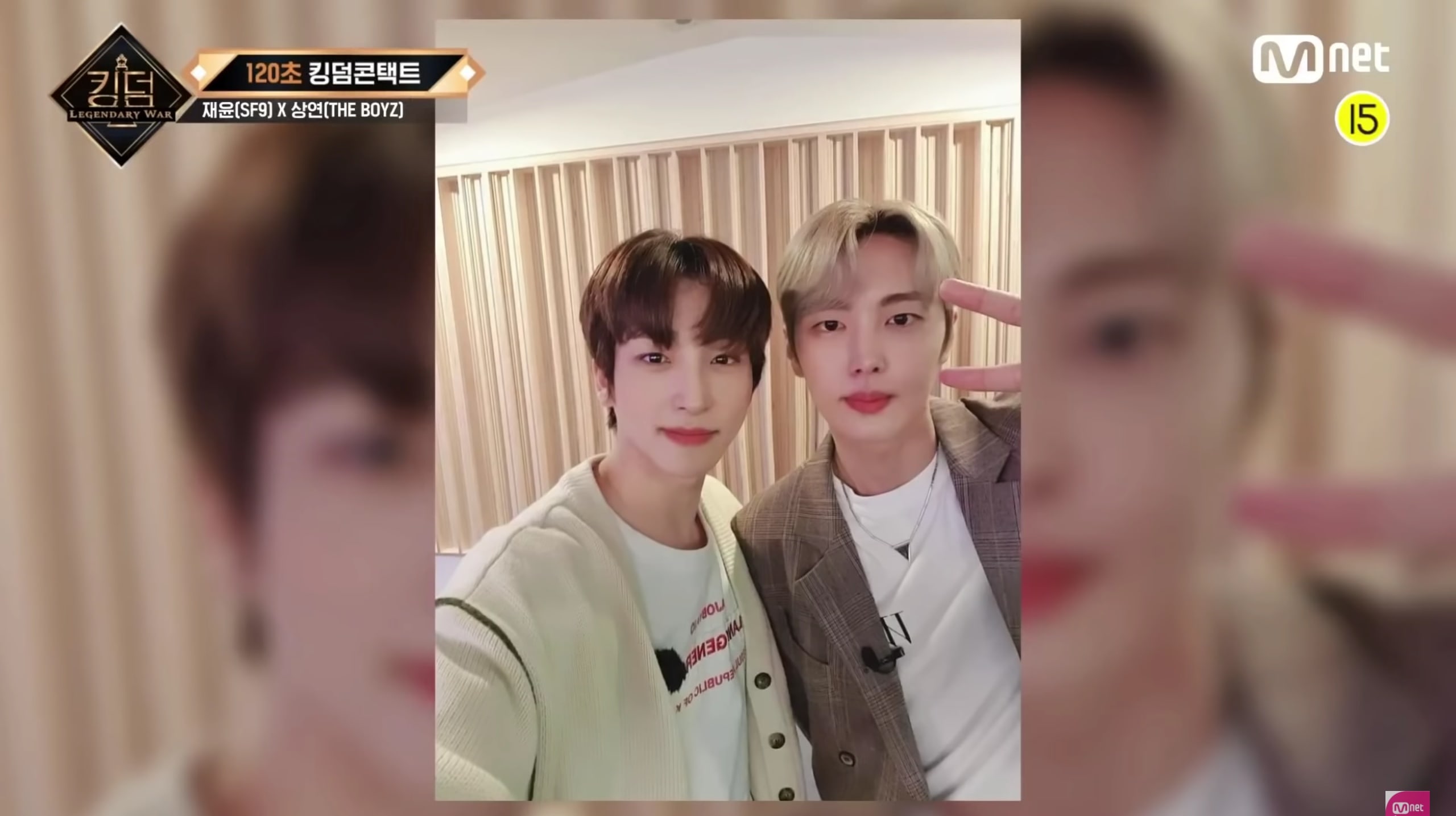 iKON’s Jinhwan and THE BOYZ’s New discuss their love for clothing, and Jinhwan shares that he also likes games and working out. New calmly responds, “I don’t like games or working out. I just don’t do either very often.” New then shares that he only had a coffee for breakfast, and Jinhwan tells him, “It’s not good for you if you drink coffee on an empty stomach. It could be bad for your stomach. Try drinking some cabbage juice.” New immediately responds with a laugh, “I don’t like cabbage juice either,” and Jinhwan jokingly comments, “We don’t match well, huh?” 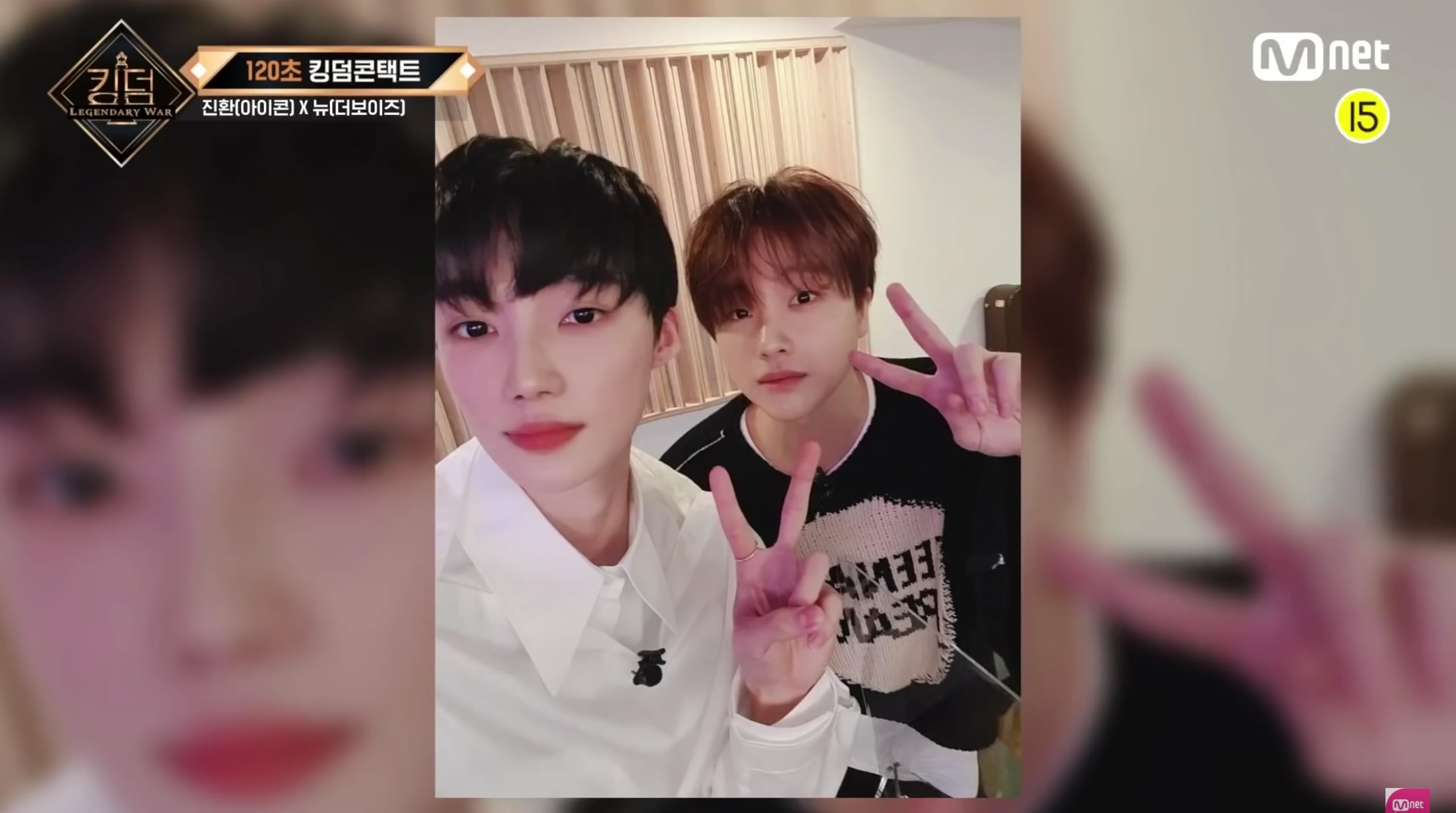 Watch “Kingdom” with subtitles below!