On the May 18 broadcast of MBC FM4U’s “Good Morning FM with Jang Sung Kyu,” the ladies of aespa joined as guests to talk about their latest release, dorm life, and more.

Regarding their dorm situation, Karina explained, “The rooms are divided between the unnies, me and Giselle, and the younger two, Ningning and Winter. Us unnies are scaredy cats so we’re the type to ride on the safest seat of a roller coaster.”

Karina also revealed, “Giselle sleep talks in French. After speaking in French for a worldview video, I was shocked to hear her sleep talk in French. I think she’s now mastered four languages.” Giselle added, “Karina wakes up saying my name.”

When asked how she was able to master so many different languages, Giselle commented, “I speak four languages: Japanese, Korean, English, and French. A tip for learning languages is just to spend time with people [who speak that language], or if you watch a lot of films, I think you naturally learn it.” 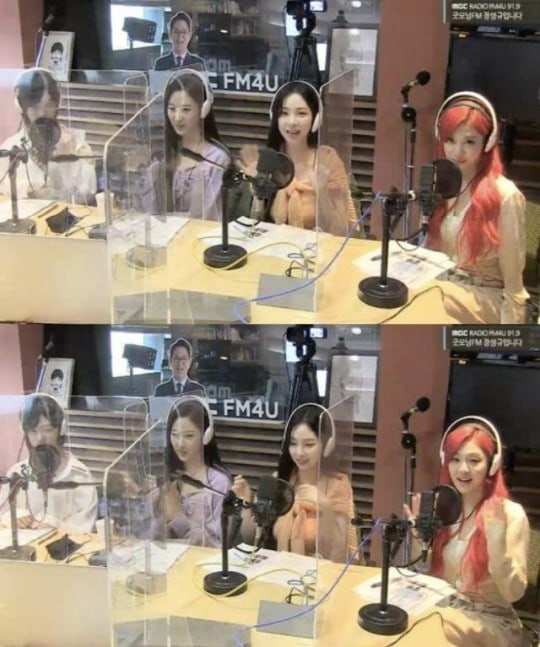 With their latest single “Next Level,” which was released on May 17, aespa has taken the top spot on music charts all over the globe. Karina commented, “Placing first on charts is shocking. We weren’t expecting it. Rather than results, we had put our focus on growth, but I’m so thankful that we were able to receive such good results. Our music video view count goal is 100 million and five thousand. We’ve also started a dance challenge.”

In line with their rising popularity, aespa also made a promise for if they take first place on a music show. The group discussed possible options such as sharing videos of them sleep talking, doing a relay dance, performing with switched parts, filming a dance practice video wearing animal pajamas or suits, riding each other’s favorite roller coasters, or copying Jang Sung Kyu’s infamous eye smile.

The girls eventually decided on Jang Sung Kyu’s eye smile as well as a relay dance and an animal pajama dance practice video.

Good Morning FM with Jang Sung Kyu
aespa
How does this article make you feel?