It’s time to say goodbye to our favorite vigilante crew – far too soon, if you ask me. But all good things must come to an end, and “Taxi Driver” is no exception. Even the final episodes were packed with thrill and suspense, which made for a really exciting watch until the very end. But the drama was not only highly entertaining, it also raised awareness about crimes that really happened and the struggles the victims face. Therefore, “Taxi Driver” definitely stands out in dramaland as a truly well-made and meaningful show.

The finale didn’t disappoint either. It’s probably not far-fetched to say that it couldn’t have been better. Let’s revisit eight highlights from episodes 15-16 that led to a perfect ending.

One for all, and all for one

Now that Baek Sung Mi (Cha Ji Yeon) has been arrested, the time for the Rainbow Taxi crew to face the consequences of their actions has finally come. Notwithstanding their good intentions, they did break the law, and thus they’re bracing themselves for jail. Jang Sung Chul (Kim Eui Sung), though, announces to the team that he’s planning to take all the blame, but the others are quick to disagree. 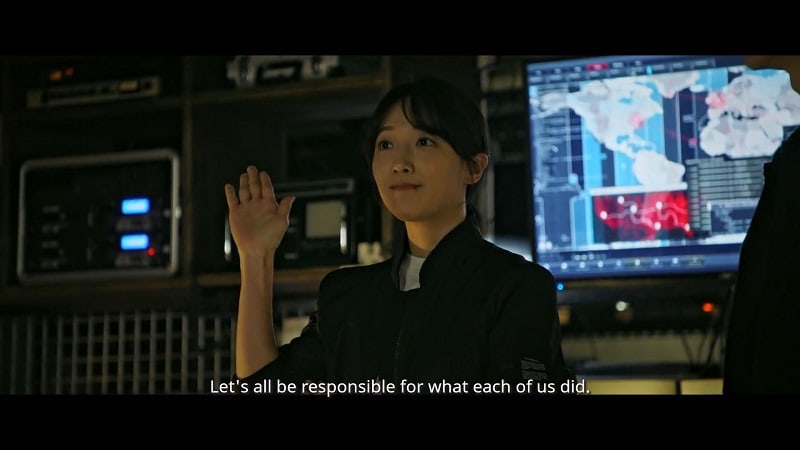 It’s so heartwarming to see how the Rainbow Taxi team always sticks together no matter the situation. They are much more than just a group of people working together for the purpose of revenge. After having lost their beloved relatives to crimes, they’ve found a new family in each other that can provide them with the warmth and comfort necessary to heal.

The truth behind the murder of Kim Do Gi (Lee Je Hoon)’s mom might as well be the biggest plot twist of the entire series. After 20 years of silence, serial killer Oh Chul Young (Yang Dong Tak), the murderer of Jang Sung Chul’s parents, confesses to having killed two more people – and one of them is none other than Kim Do Gi’s mom. This twist came unexpectedly. Even though Do Gi had to relive the painful memories while facing Oh Chul Young, in the end it granted him the chance to find the closure he couldn’t get when he had been under the belief that the culprit died by suicide. 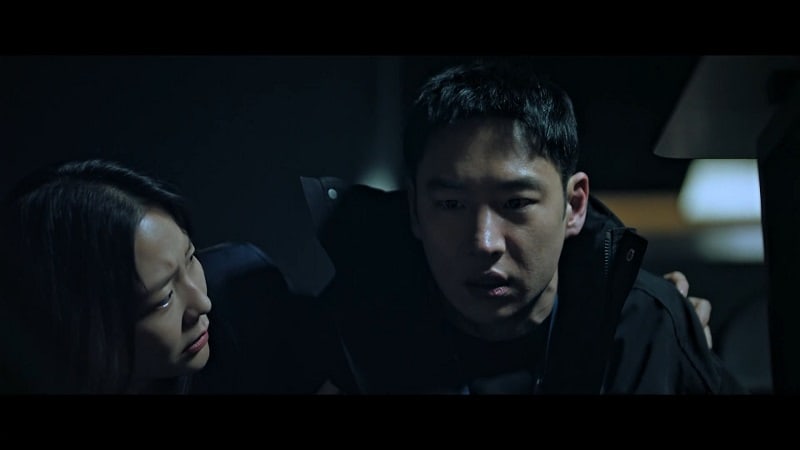 Do Gi ultimately sets out for his own personal revenge, which the Rainbow Taxi team declares as their final mission. As it turns out, Jang Sung Chul paid Oh Chul Young numerous visits over the years in order to understand him better and eventually also found his weakness: his son Hyun Soo (Ryu Sung Rok), whom he loves dearly. Do Gi thus proceeds to use the son against Oh Chul Young. 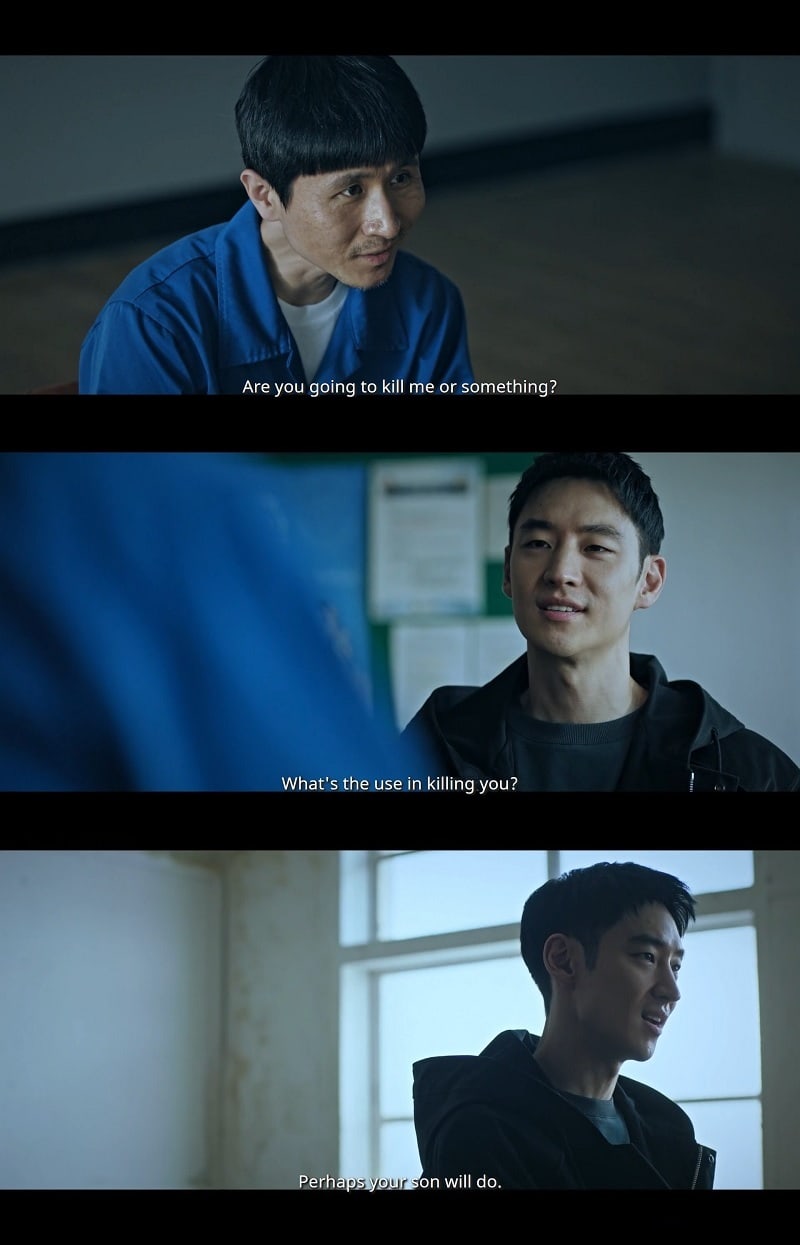 But the vigilante’s words towards Oh Chul Young aren’t just empty threats. He approaches Oh Hyun Soo (who now goes by the name Han Dong Chan) for real, and thanks to the latter being cornered by loan sharks, we get to see Do Gi in action one more time!

Although we can be sure that Do Gi certainly didn’t plan to kill Han Dong Chan, it seems like he indeed considered hurting him in some way in order to get revenge on Oh Chul Young. But Do Gi quickly realizes that the guy doesn’t know anything at all and is just another victim, for he had a very hard time growing up without a father. In the end, Do Gi decides to hide the truth about his father forever. This proved once again that Do Gi’s heart must be really heavy as it seems to be made out of pure gold. 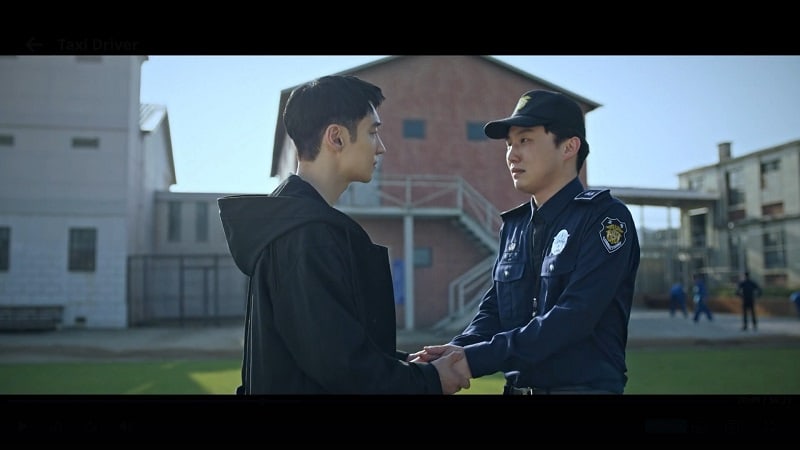 As Kim Do Gi lets go of the trump card of knowing Oh Hyun Soo, karma decides to help him out instead. Han Dong Chan, who works as a prison guard, happens to be at exactly the same prison as his father, though both don’t know of each other. As a result, Dong Chan ends up in the hospital after Oh Chul Young breaks his bones, and tragedy strikes: Dong Chan’s mom, who is suffering from dementia, dies while looking for her son who couldn’t take care of her anymore. Because of this, Jang Sung Chul finally manages to break Oh Chul Young by reporting the incident to him. 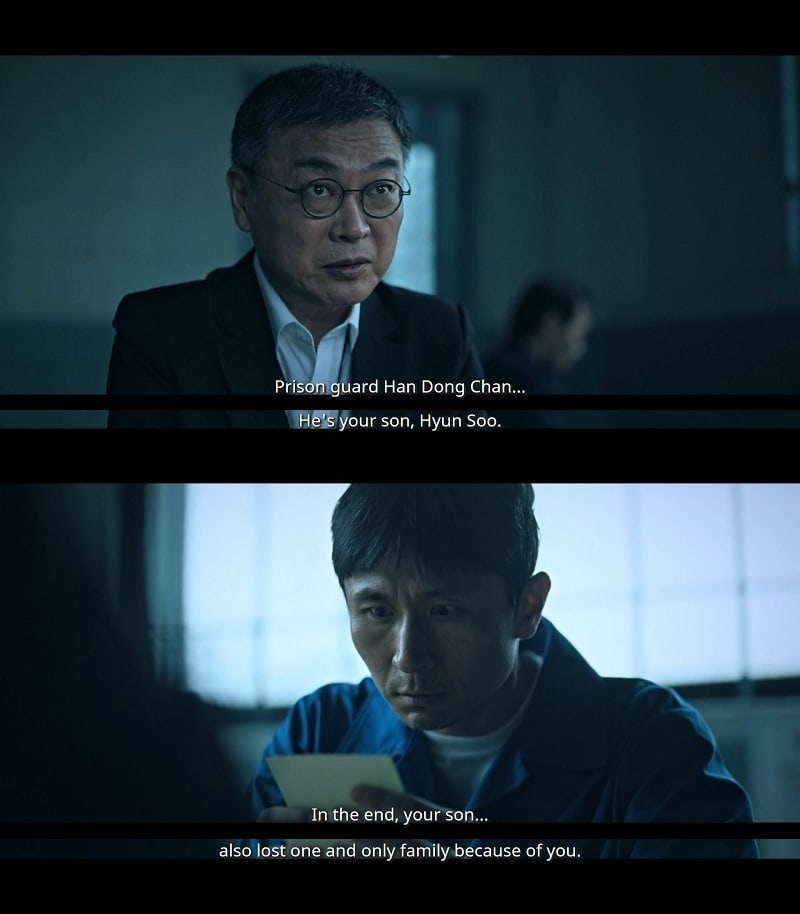 While it’s sad for Han Dong Chan, I’m also really happy and relieved that Kim Do Gi and Jang Sung Chul still got their sweet revenge in the end without breaking the law this time. It was a crucial moment for them and a big step towards achieving inner peace.

Kim Do Gi is ready to get arrested by Kang Ha Na (Esom) who is investigating Baek Sung Mi, Rainbow Taxi, and everything related. But to his (and our) surprise, Ha Na declares that she can’t arrest Do Gi since they lack evidence, which means that she decided to cover up for his team. Thereafter, the two have a heart-to-heart and Ha Na thanks Do Gi for being there for the people the law couldn’t protect. 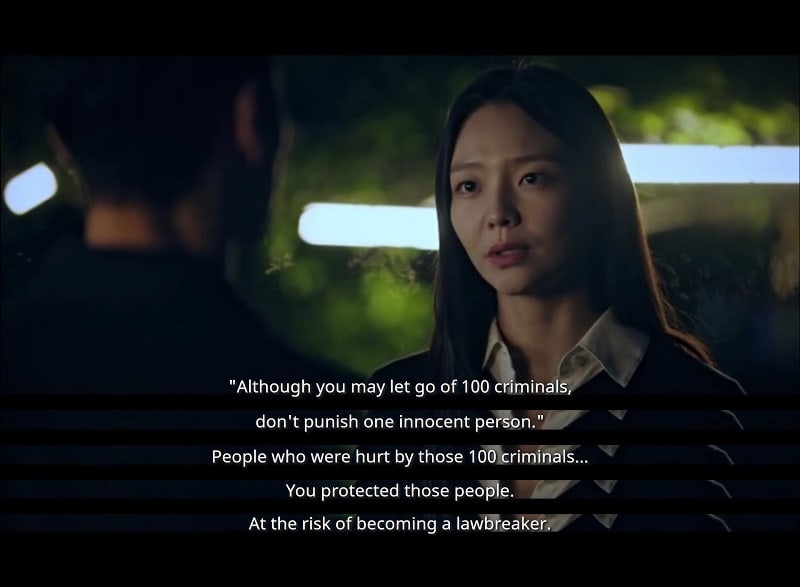 I’ve never been so proud of Ha Na throughout the drama before! It was a long and difficult journey, but she still saw and recognized the faults in the legal system as well as Rainbow Taxi’s value at last. She even put her job on the line to protect Do Gi and his crew, which shows that she too truly cares about the people but just had a different approach to seeking justice. Finally, Ha Na and Do Gi are not butting heads anymore. It’s such a beautiful sight. 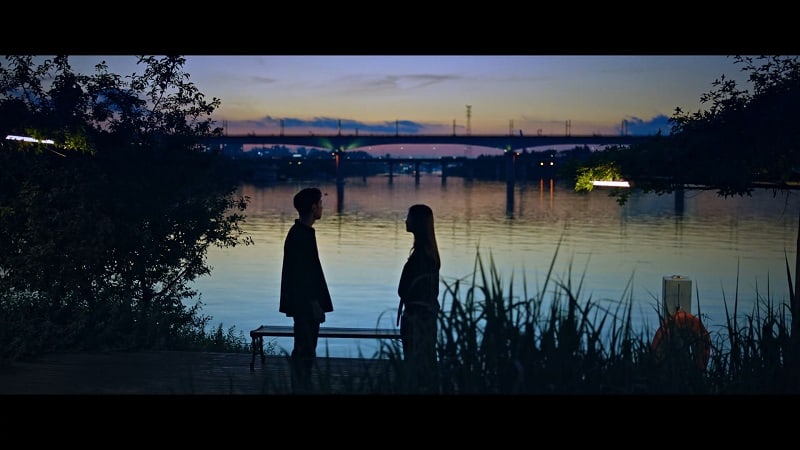 A 10-year sentence for the show’s main villain would have been pretty ridiculous, though sadly realistic as the law is often too lenient. It was all the more gratifying when Baek Sung Mi’s sentence was surprisingly doubled in the second trial. Kang Ha Na has definitely done her job right! 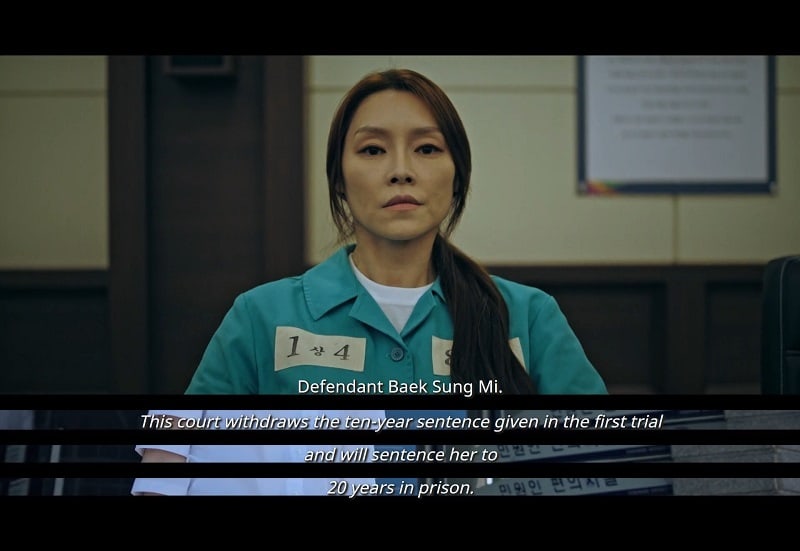 One’s life shouldn’t be consumed by hate and revenge, so it was only a question of time until the Rainbow Taxi team would put an end to their service. Although it was really sad to see them part, it was definitely the right decision. Building up a normal life again needs to have priority. After all, living a good life can also be considered true revenge. 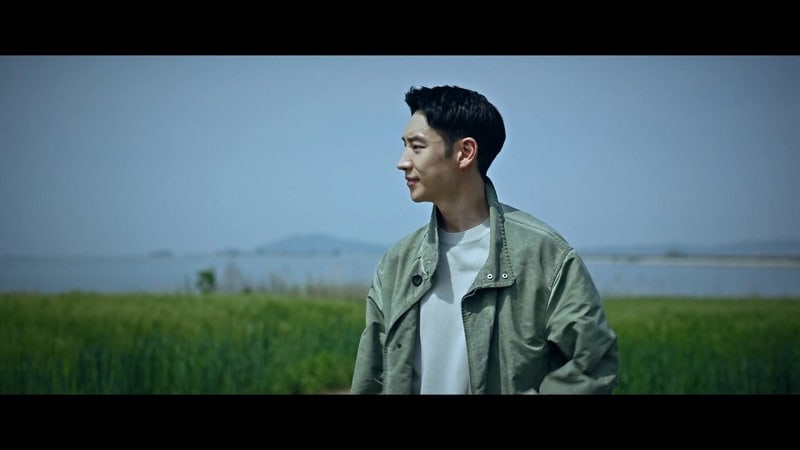 While Do Gi decides to travel and finally gets some truly deserved rest, Go Eun (Pyo Ye Jin) takes the civil service exam and becomes a badass police officer. The job definitely suits her! Choi Kyung Goo (Jang Hyuk Jin) and Park Jin Uhn (Bae Yoo Ram), on the other hand, return to their previous lives and start working in their old jobs again. 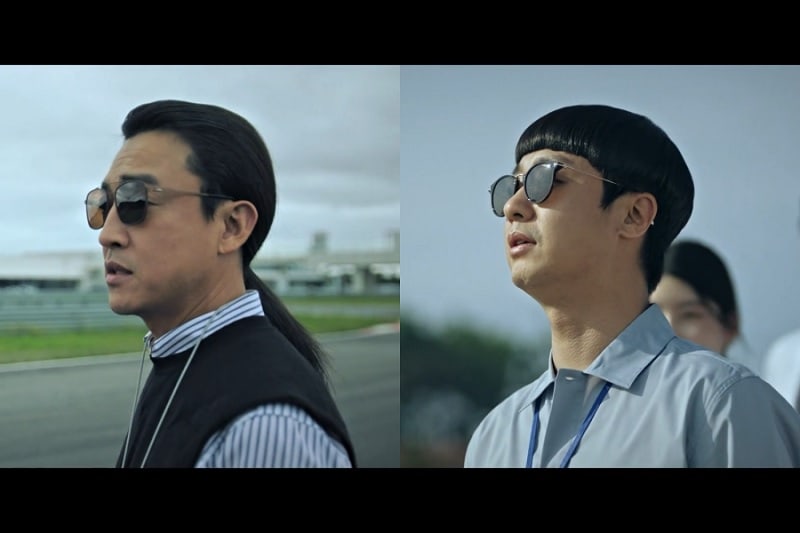 But this isn’t the definite end for Rainbow Taxi. After one year, we see the team reunite – with the addition of Kang Ha Na! Crimes of course still happen and the law still can’t protect everyone. Thus, there will always be the need for Rainbow Taxi to exist. From the looks of it, the team members now each live their own lives, but when Rainbow Taxi is needed, they come together and act. With two team members representing the law, Ha Na and Go Eun, there is now also an ideal balance between the two sides of the coin. Now this is a perfect ending!

Even though “Taxi Driver” wrapped up really beautifully, the addition of Ha Na to the crew leaves one wanting more. I’m very curious how their teamwork would actually look like, and it’s a pity that we didn’t get to see that more. There are still many more cases out there that haven’t been addressed yet. As Lee Je Hoon said himself in a recent interview, “a 16-episode miniseries was too short to contain all the stories that we could have told.” So can we hope for a season two?

Hey Soompiers! Are you satisfied with the finale of “Taxi Driver”? Would you love to see a second season? Let us know in the comments below!

Currently watching: “Mad for Each Other,” “Youth of May,” “My Dear Guardian”
All-time favorite dramas: “Move to Heaven,” “Children of Nobody,” “My Ahjussi,” “Ode to Joy,” “Back in Time,” “From Survivor to Healer”
Looking forward to: “Hospital Playlist 2,” “Nevertheless,” “The Devil Judge,” “The Oath of Love“